Excuse me while I come to terms with the fact that I’ve been playing de_dust2 for 18 years. If my playing Dust2 was a person, I realise, it could legally drink, vote, and join the army in the UK. My playing Dust2 could have its university picked out, could be settling into a career path. It could have moved out. I could have driven it, teary eyed, to its new home, where it would find its own way in life, maybe even find its own first-person shooter map that it could play for 18 years.

I’m trying to say that I have been playing Dust2 for a very long time. And somehow, I’m still not any fucking good at it. Sheer bloody mindedness alone should’ve seen me get incrementally better, but dipping back into the newly free-to-play Counter-Strike: Global Offensive, I’m still making the same mistakes I was in 2001. I’m still rushing B too fast and getting mown down by a CT in the cracked wall. I’m still hawking around the AWP corridor from the T spawn, getting my head taken off by a sniper shot for my troubles. I’m still getting flashbanged by everyone, be they friend or foe. It’s frustrating to still be this bad, to still not understand Counter-Strike’s emphasis on precision and movement.

But it also feels comfortable. I’ve been playing Dust2 so long that it feels like a real place. I could draw you a map of it from memory, if you wanted me to, and I could tell you stories about matches played on regular servers and over LAN party connections, between friends and strangers who would become friends. It’s my first port of call on my recent return to Counter-Strike, and it lets me reacquaint myself with the basic rules of the game: what to buy, where to rush, and how to control recoil. 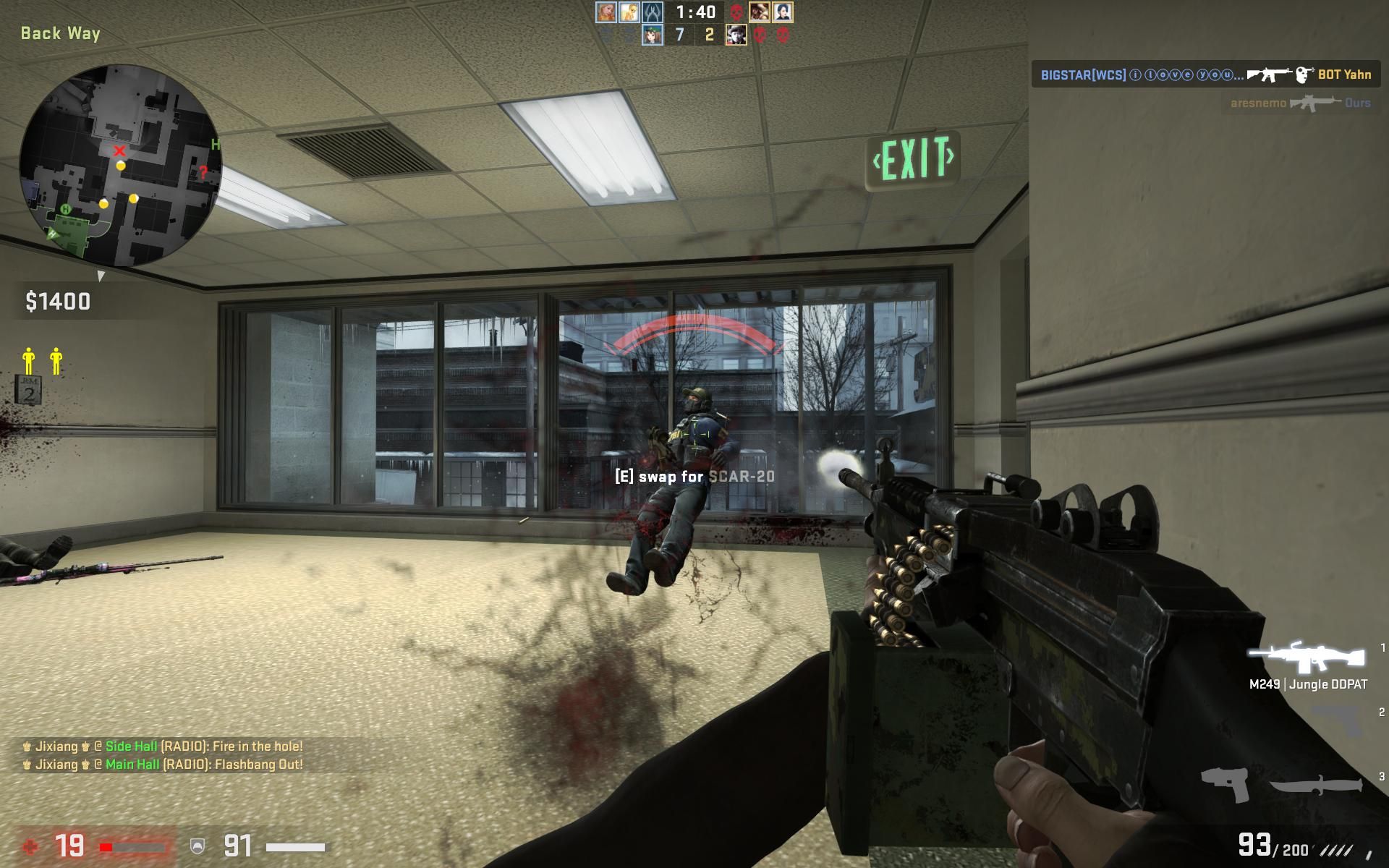 Dust2 — and my inability to play Dust2 properly — is one of the things that’s remained constant in Counter-Strike as it’s switched from mod, to full-price game, to free-to-play, and from multiplayer rising star to esports relic. It’s joined by other remnants of the original game, maps like Nuke and Office that rose to become, if not as ubiquitous as the Dusts, then a close second in the Counter-Strike map pantheon. These include Cobble, Assault, and Italy: old stalwarts that fill out the bulk of CS: GO’s playable map pool. But there are new arrivals too.

Community-created maps have been added over the past few years, borrowing the same angular architecture of venerable stages such as Italy and Dust2, but building with it new spaces that feel unfamiliar to my fingers. In the most recent of these, Counter-Strike’s functional naming convention is in full effect: Zoo is set in a zoo, though it’s sadly devoid of most of its animal residents. Abbey is set in an abbey, but doesn’t have any monks. Of the two, I prefer Zoo, which mixes tight corridor combat with some long sight lines, allowing for some easy AWP opportunities, but neither of the newest maps feel quite as coherent as their older siblings. It’s hard to tell why that is: perhaps it’s just down to years of familiarity on my part, or maybe because they look a little drab.

Certainly, CS: GO isn’t as pretty a game as most of its modern shooter peers. Its textures have largely kept pace with the pack, making dusty floors and broken walls look suitably dusty and broken, but there’s a residual Half-Lifey squareness to everything that’s increasingly apparent on 2019’s new maps. These new maps are playable in casual play, but haven’t yet made it to competitive mode. The former, in 2019, is closest to my formative Counter-Strike experience: friendly fire is off, microphone communication is kept to a minimum, and ill-advised bullrushes into camped bombsites are met with quiet disdain, rather than chat-bound vitriol. 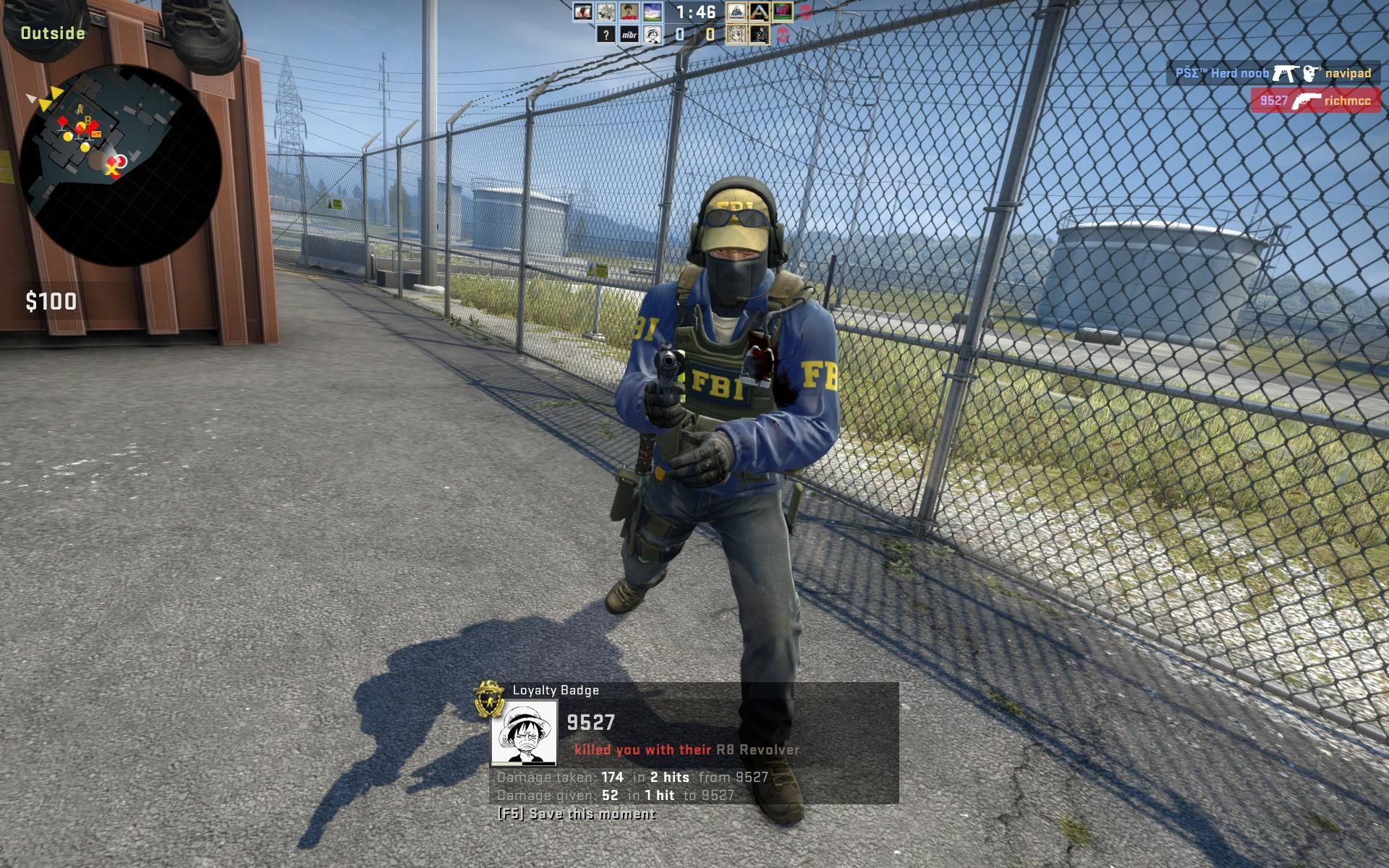 There are other in-game concessions too: kevlar armour comes as standard, and counter-terrorists get free defusal kits, meaning you don’t have to spend your in-game blood money on vital extras. Competitive mode remains a smaller, tighter, scarier alternative, locking players into five-on-five games for upwards of an hour, the teams switching sides until a winner is declared. The time sink alone makes competitive mode a daunting prospect, doubly so when mistakes are punished by both enemy and teammate alike.

CS: GO’s newer Wingman mode, locked in as a permanent fixture after being offered as one of a rolling series of special modes, offers a middle ground between those two extremes. A two-on-two variant, Wingman plays out shorter rounds on smaller maps, demanding less time than standard competitive mode, and breeding an interdependence that amps up the tension in the process. Playing with strangers, I found it difficult to coordinate plans beyond “let’s both shoot at the enemies at the same time,” but with a friend, it’s a generator for amateur heroics. I found myself gravitating towards Wingman whenever I felt like I had my aiming eye in for the day, revelling in the adrenaline shots that came with the increased responsibility of being half a team, and of having my dead teammates eyes on me.

I found matchmaking a fairly quick process in casual, competitive, and wingman, helped in part by having unlocked “Prime” status. This $15 upgrade (automatically unlocked for anyone who bought CS: GO before it went free-to-play) widens the player pool so you can play with other Prime subscribers, as well as increasing the amount of loot drops you’ll get. Speaking of loot: I only earned a handful of weapon cases during my return to the game, each of which I didn’t stump up the real-world money to open. There’s a hefty grey market for Counter-Strike skins, but they’re cosmetic only, and only became apparent for me when I caught myself cooing quietly over an enemy’s gaudy gun.

CS: GO was review-bombed on its switch to free-to-play, with angry types citing a supposed influx of cheaters as one of the reasons for their negativity. I don’t think I saw any obvious wallhackers or aimbotters during my time with the game, as much as I’d like to pin my poor performance on dodgy goings-on. Some other reviewers cited a general concern with the free-to-play model and the possibility of future price gouging, but in 2019, I found CS: GO’s microtransactions unobtrusive, particularly when its last Operation, a months-long paid-for campaign update, launched in 2017, with no sign of a new one on the horizon. 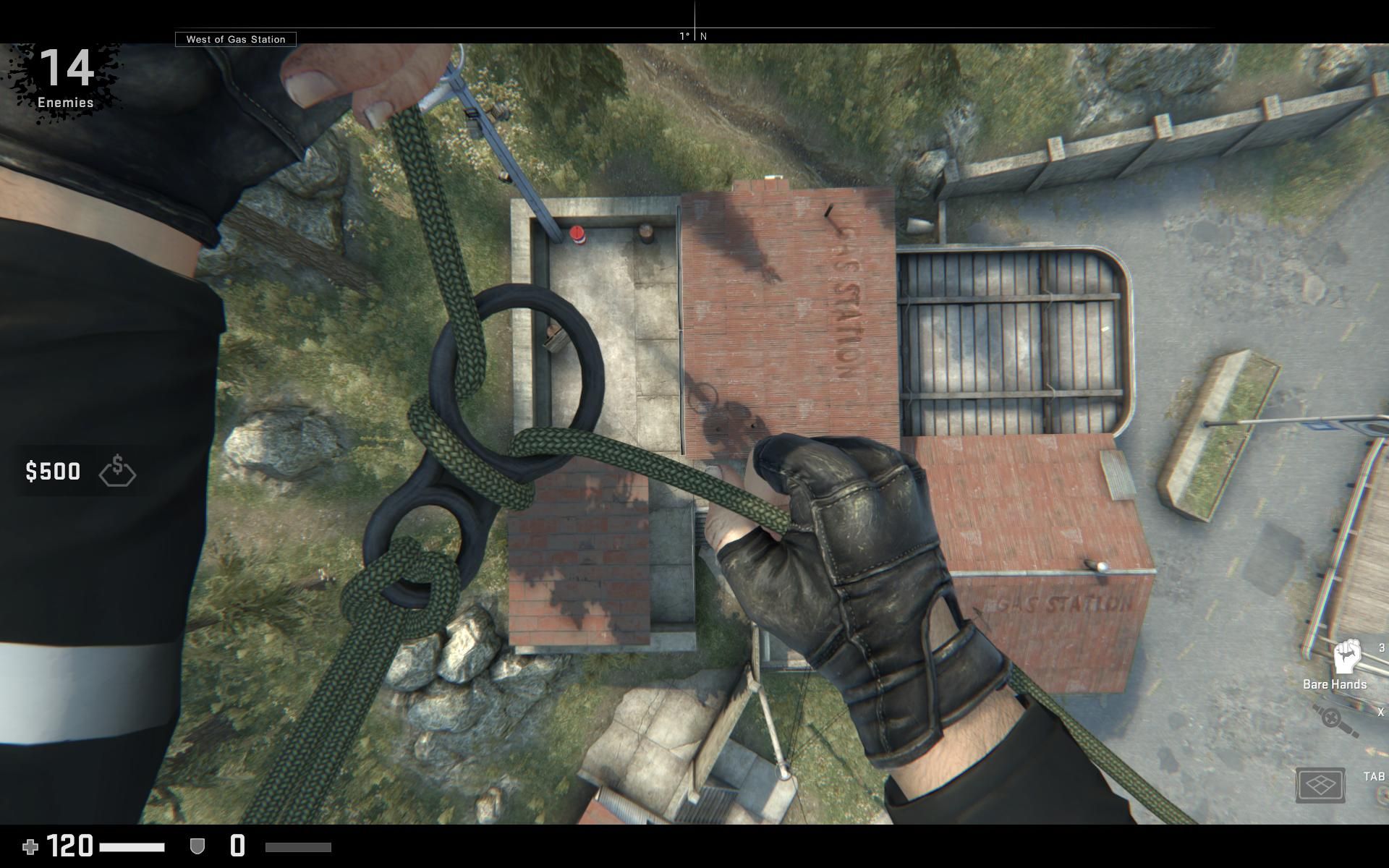 But the game has also made some larger concessions to the passing of time, and, most recently, to the rise of new genres. CS: GO added its own battle royale mode late last year, transposing its weapon set and shooting mechanics from small stages to an expansive island, and changing the rules of engagement from team-on-team to free-for-all. The mode’s called Danger Zone, and while it doesn’t have the scale of PUBG, the freeform building of Fortnite, nor the joyful movement of Apex Legends, I did find it more than just a bandwagon jumper.

For one, Danger Zone’s player count is much smaller than its peers. Only 15 drop onto the island at the start of a round, meaning that games are shorter. That gives Danger Zone a slightly more parochial feel than the grand 100-person rumbles of PUBG and Fortnite, but in my experience, it was a blessing in disguise. Too often I’ve dedicated the better part of an hour to an unsatisfying PUBG game that ended with death from an unseen assailant, but any time I was jumped in Danger Zone, I was out and back searching for a new match too quick to get properly annoyed. Even my more successful games, when I made it to the last few survivors, barely took more than 20 minutes.

That’s not to say that Danger Zone solves the irritations of the genre: you’ll still get shot in the back by a foe you didn’t hear coming, but the mode does provide some novel recourse to solve the problem. Players are furnished with a tablet that, in addition to allowing them to buy drone-delivered guns and ammo, indicates the general location of nearby enemies. This allowed me to set up camping spots, to channel my fire, and to plan my next moves more effectively than I could in other battle royales, where death can come unbidden from any bush.

Actually using the tablet requires players to jab their in-game face against it, though, taking them out of the moment and into the abstract. Every second I scrounged cash or browsed for new guns, I wasn’t scanning my surroundings, and I left myself open to easy ganks from more aware enemies. Weapons and ammo can be found in crates, but players can also call in quality gear through the tablet, signalling a drone to drop off a crate. This too makes players a target, the drone pointing out their location, as well as offering a tasty carrot, dangling from its quadcopter undercarriage, for gun-hungry enemies. 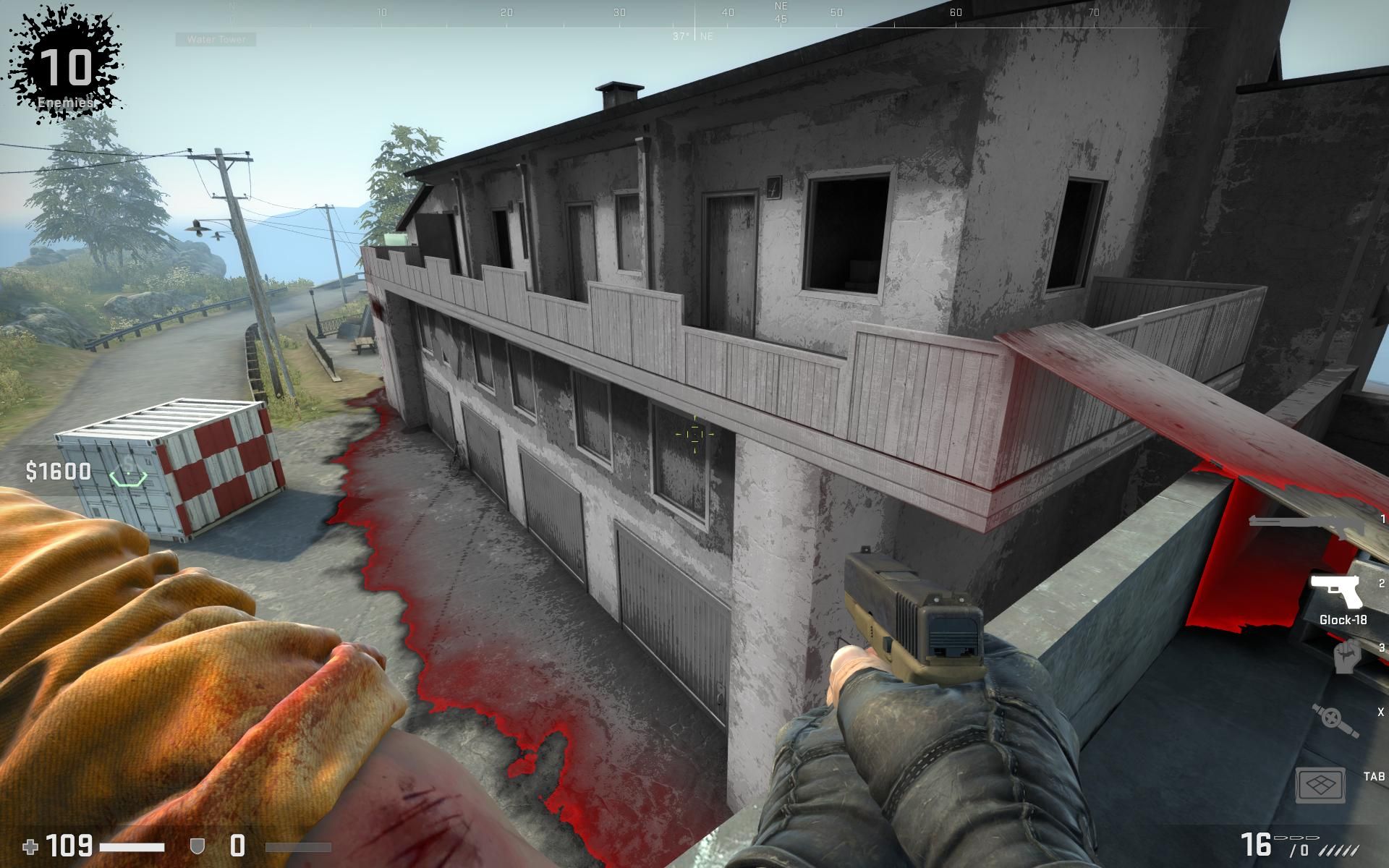 It’s a careful risk-reward balance, and it’s underpinned by Counter-Strike’s superlative shooting. Other Battle Royale games put the focus on looting, or building, or movement. Danger Zone, as always in Counter-Strike, emphasises clever positioning and precise shooting. It’s that shooting that makes a free-to-play Counter-Strike still an interesting prospect, but also what makes it daunting to come back to in 2019. It’s first-person shooter formalism, and fellow players have had two decades to study that form, nailing recoil management, identifying weapon quirks, and locking in their pre-shooting.

That’s especially apparent in the professional scene, something CS: GO does a great job of showcasing in a slick front-end. I was playing as Intel Extreme Masters’ Katowice Championship was taking place, as evidenced by the Twitch stream that loaded seamlessly inside my game client. It’s a little thing, but it makes an old game feel both alive and supported. I caught myself dawdling between my own matches, preferring to watch the stream, glued to the kind of high-level play possible when a team spends 18 years on the same game.

That legacy makes jumping in cold to CS: GO after all this time later feel like a tricky task. The rules have calcified, the players have progressed, and the ropes are difficult to learn. Even with hundreds of hours under my belt I felt nervous coming back, killed again and again by people with rare rifles and stat-tracking shotguns. But in sticking it out, I remembered the twitch of my old trigger finger, and found solid reasons as to why so many are still watching and playing Counter-Strike, even two decades later.