Gaming’s greatest gun is still Doom’s double-barrelled shotgun. We have to all say that, right? For my money, though, slots two, three, four — all the way down to about 15 in the list of Top However Many Shootiest Guns in Videogames — belong to Killing Floor 2.

Tripwire’s co-operative zombie survival shooter has so many great guns that it’s difficult to put them in order. I think my favourite is the Desert Eagle, a brick of a gun that removes zombie heads in the same way that plastic explosive removes a drain blockage. Or maybe it’s the AA12 automatic shotgun, a weapon that looks like a child’s drawing of a gun but is capable of belching out 20 shells in a few seconds, creating a plume of flame that looks like a dragon sneezing. 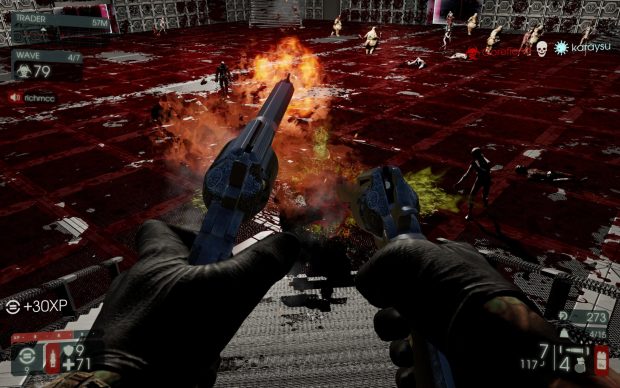 Except no, wait, my best is the new Stoner 63A machine gun, with its raspy, whiny cadence, its ridiculous vertical kick, and its ability to hose the legs right off a zombie in just a few bullets. Shoot the Stoner in a crowded hallway, and you’re not just hoping to kill something; you’re going for distance. The gun turns zombies into their constituent chunks, then propels those chunks up the nearest wall, letting me kick arms and heads and who-knows-whats around like horrible leaking footballs.

The Stoner is one of Killing Floor 2’s newest weapons, introduced for free in March as part of “The Descent” content pack. The pack was one of three major updates to the game since its launch last November, and added a new map in addition to new weapons. The Descent also brought a new mini-mode (Holdout) that made some minor tweaks to Killing Floor 2’s standard hold-out-against-waves-of-enemies approach.

Rather than allowing players to set up their preferred killing fields in one corner of a map, Holdout stages force them to move between smaller rooms, hopping down elevator shafts to move between enemy waves. It’s a small tweak to the existing formula, but Holdout does address some of the stagnation problems Killing Floor 2 had at launch. Games can run long — a full 10-wave session can push an hour on harder difficulties — and spending that long in the same space can get tiresome. That’s especially true when players simply fall back to their favourite choke points, doomed to simply repeat the same exercise four, seven, or 10 times in a row, depending on server settings. 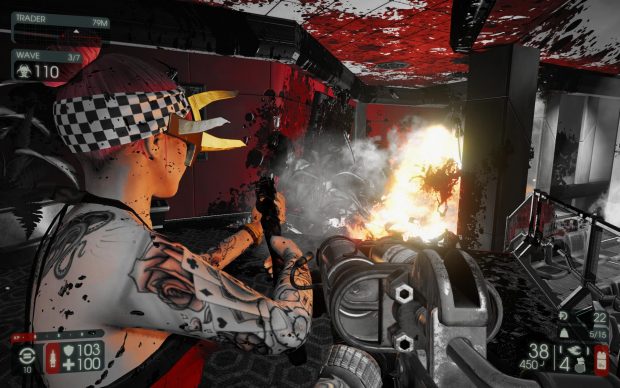 The Descent’s new map instead forced me to improvise, and to scout out defensible positions in the short space of time between waves. The map’s set in the catacombs under a zombie-spawning Nazi scientist’s manor, and it has the kind of knick-knacks you might expect from such a location: flayed corpses, rusted medical equipment, and vat after vat of mysterious green goo. The Descent also has a more coherent sense of forward progress than vanilla survival mode stages do, but it’s a shame that it’s the only map so far to take advantage of the Holdout ruleset.

Of the two other new maps, Nuked is a more standard survival stage, while The Tragic Kingdom adds a few fun tweaks. Introduced during Tripwire’s Summer Sideshow update, it’s a circus-themed affair, and is packed with traps that players can trigger by powering up a generator, allowing them to lock Zeds in cages, zap them with electric shocks, and skin them with a spinning carousel.

Three new official maps won’t be a huge draw for players who sampled Killing Floor 2 at launch, though. Luckily, the community has picked up some of the work, creating a whole host of levels that run from utilitarian to weird as hell. A lot of these are inspired by other games: I painted Princess Peach’s castle red with the blood of my mutant zombie enemies, I returned to castle Wolfenstein for what must be the twentieth visit, and I held out against wave after wave of Zeds in a recreation of Resident Evil’s Spencer mansion. As with Team Fortress 2’s mapping scene, it feels like some of the weirdness of early-2000s PC gaming is alive in the KF2 community: a good thing. 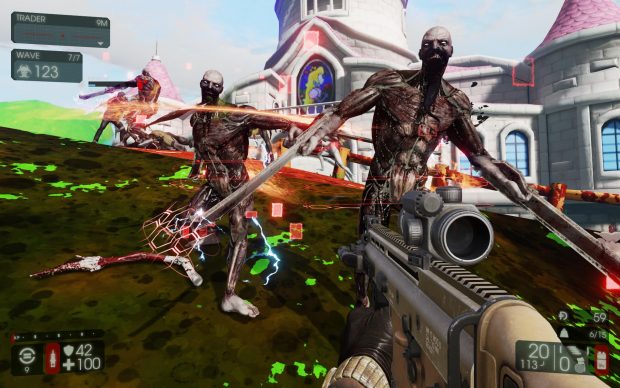 KF2’s new weekly challenge system works better to keep players coming back. These challenge missions guarantee cosmetic item drops, but only if you survive some of the game’s hardest enemies, each souped up with special modifiers that make Zeds tougher, faster, and stronger. These challenges are as close as Killing Floor 2 gets to an endgame for advanced players, and require a co-ordinated team willing to fail a few times first. In guaranteeing loot, they give KF2 players a reason to return on a regular basis, but they do also strip out some of what makes Killing Floor 2 fun in the first place: the punch of its weapons.

Last week’s challenge upped Zeds’ health, reach, and physical size, ramping the difficulty up to “suicidal” in the process. The rules were harsh, but rather than exhilarated, I just found myself frustrated that my trusty double deagles weren’t making a dent on some of the tougher enemies. Killing Floor 2’s joy is in the physicality of its guns: their kick, and their targets’ reactions. Increasing health bars prices those reactions out of easy reach, meaning you’re stuck shooting bullet sponges that don’t flinch until you’ve wasted an entire clip on their buffed behinds.

The boss stages of these weekly challenge runs are particularly painful. Killing Floor 2 only shipped with two bosses — the Patriarch and Dr. Hans Volter — and none have been added in the months since, meaning players have to put down either a teleporting bullet sponge with extra powerful weapons, or an invisible bullet sponge with extra powerful weapons. 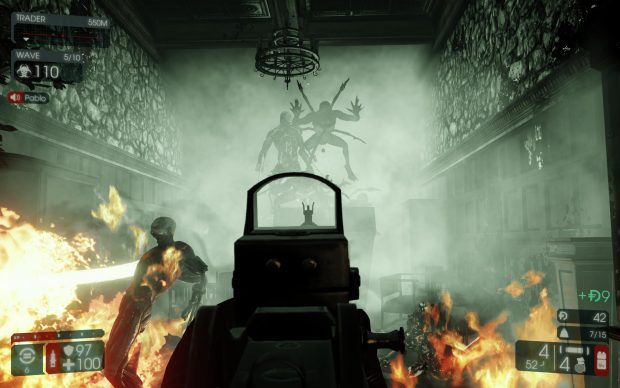 Instead, the intervening months have seen Tripwire add a suite of cosmetic items. Many of these come in crates that drop through play, but need to be unlocked with keys bought for real money. Those items include new clothes and hats that can be worn by the game’s characters, but I was far more interested in the weapon skins on offer. After all, Killing Floor’s guns are its characters.

Even within then easy categorisation of pistols, shotguns and assault rifles, there is delightful variance. The AK47 and the SCAR are both reasonably accurate assault rifles, but one goes “dakkadakkadakka” while the other goes “tsst-tsst-tsst-tsst. Both have their applications, and both feel so chunky, so powerful, and so pleasurable to shoot that I’ve just had to describe them in text by approximating mouth gun noises. 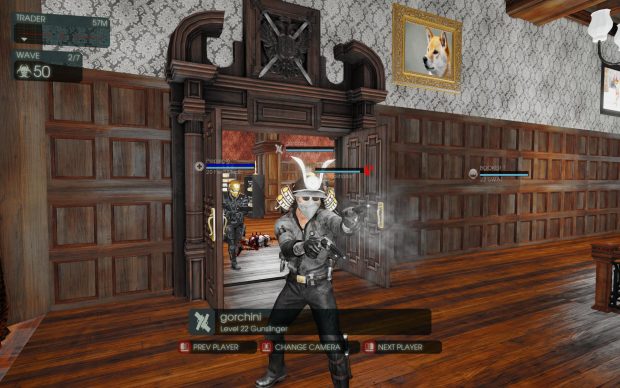 Not all of the new weapons are direct hits. The twin flare pistols, introduced in the Descent pack, are less enjoyable than most of their regular-bullet-firing friends, and the same can be said for most of the flame weapons. Sadly, the woosh-pfff of Killing Floor 2’s flamethrower fuel has nothing on the boom-ping-ping of a shotgun or the ratatatatat of an assault rifle.

But as long as those weapons are available, then Killing Floor 2 remains worth diving into. It doesn’t have the persistence, the promise of drops, nor the ever-shifting metagame of some other online shooters. What it does have is some of the greatest guns in gaming — and for an FPS, that’s more than enough.