I want to make a Rollercoaster of Hate. I want to make something so fast, so rickety, and so nauseating that its riders feel as uneasy as I do when I think about the Red Hot Chili Peppers song Love Rollercoaster. Planet Coaster is largely accommodating of these dark urges. Frontier’s game — the spiritual successor to the glorious Rollercoaster Tycoon series — lets players construct their own coasters, noodling on every twist, turn, and terrifying drop to squeeze the most vomit out of its riders.

With the infinite money open to me in Planet Coaster’s sandbox mode, I settle on a design: a slow climb to the top of a horrible mountain, before a sheer plunge down 20 storeys provides the speed to make it through five loop-the-loops, each sharply veering left, then right, then back again. I have, I realise after connecting up the final piece of track, inadvertently built a version of the theoretical Euthanasia Coaster — the attraction designed specifically to kill its riders. 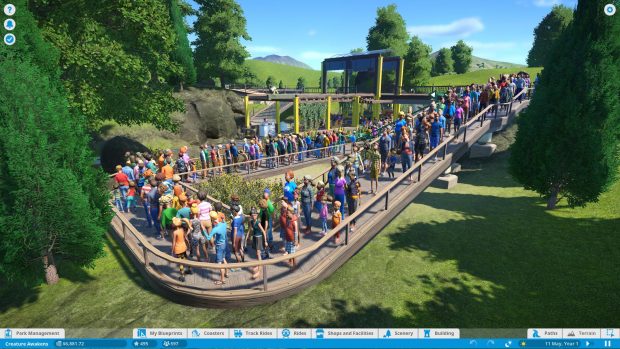 My first riders don’t die, though, because they’re not human. Before players can open rides in Planet Coaster’s parks, they have to test them, putting a gaggle of white plastic crash test dummies through an ordeal to make sure flesh-and-blood humans won’t get turned inside out along the way. It’s health and safety gone mad, obviously, but it’s also a useful way to gauge whether guests will actually enjoy the monstrosity you’ve created, as the tests spit out values for excitement, fear, and nausea that help determine a ride’s popularity and the amount you can charge for tickets.

In my case, I discovered that people actually wouldn’t be too keen on being G-forced to death: while the Hate Coaster’s fear and nausea ratings are off the scale, it’s not actually a particularly exciting ride. I can open it anyway, though, without fearing an eventual coroner visit and regulatory shutdown because, unlike the Rollercoaster Tycoon games, Planet Coaster’s human riders can’t die — though it hasn’t stopped a selection of players from Googling to check. (As a sidenote, this raises the possibility that Planet Coaster players are managing some form of afterlife for their guests: a slice of existence where death is meaningless and rollercoasters are everything.)

Apparently more exciting to my heavenly riders are Planet Coaster’s pre-built coasters, a selection included in the base game and topped up by new additions in its major DLC packs. There are two of these official add-ons at the moment, both available for £8: an Adventure-themed selection that offers snapping crocodile props and other Indiana Jones-ish elements, and a Halloween-y Spooky pack that lets players build up ghost trains and the like. Additional free updates have focused on seasons, bringing go-karts in spring, fireworks in summer, and a scenario editor as part of its first anniversary celebrations. I ended up defaulting to the prefab constructions provided in these packs in Planet Coaster’s career mode, using them to draw in more guests and up the prestige of my park on my way to completing certain tasks specified by set scenarios. 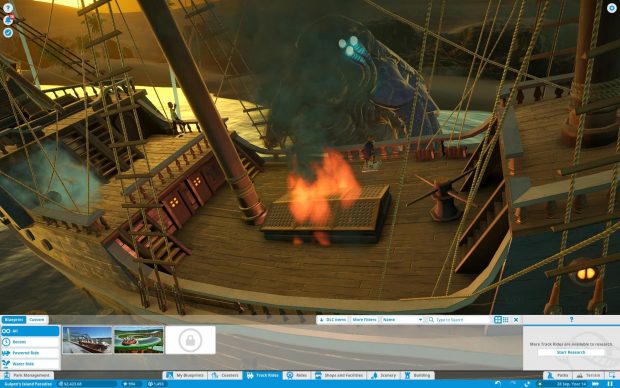 The newest of these scenarios is Gulpee’s Island Paradise, which tweaks the format of its forebears slightly, asking players to keep their staff happy as well as their guests. For me, this was a fumbling process, largely because Planet Coaster doesn’t do a great job of teaching its players exactly how they can succeed. In the two years since launch, Frontier has managed to put out a paltry six tutorial videos, and its early-game “easy” scenarios almost complete themselves once a player has plopped down a coaster or two to top up their finances. Park value, number of guests, and your monthly income act as indicators of success, but there’s still a strange mix of digital and analogue in the kind of feedback Planet Coaster provides that can make career and challenge mode playthroughs feel fuzzy. Prices, wages, and coasters themselves can be massaged until the perfect value is found, for example, but considerations like path layout or how pretty the queue are also impact income and guest happiness greatly, despite being more subjective.

Unhappy guests can now take their frustrations out on the park, vandalising benches and bins thanks to a free update released last year that brought the concept of crime to Planet Coaster's roller-utopia. The impact of this illegal activity isn't clear, however: security guards will collar pickpockets and vandals if they catch them in the act, but such incidents don't seem to make a major impact on any of the parks I've played in. These elements do at least expand on the sketched career mode present at launch, but don't quite make parks feel alive or reactive without explanation. Better tutorials would help with some minor control and placement problems, too. Attractions are raised or lowered by holding shift during placement, for example, but paths can only be moved in the vertical plane by holding the left mouse button and dragging up or down. Those same paths seem to desperately try to avoid being placed, whipping around like snakes until you find the perfect pixel that will let you place them at the right connection point.

Fortunately, Planet Coaster’s community has stepped in, offering more comprehensive tutorials for the game, its multiple scenarios, and its less obvious quirks. It’s not the only thing the community has done to make Planet Coaster feel fresh and current, either. Rollercoaster Tycoon apparently fostered a generation of frustrated theme park designers, most of whom are apparently now getting their fix by arranging track, props, and buildings into replicas of existing parks or their own wild designs. 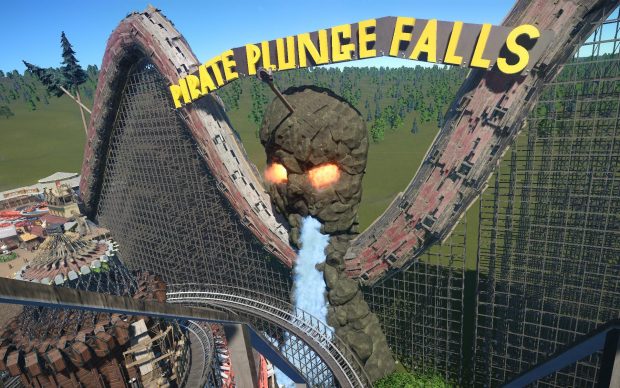 The Steam Workshop is now home to some truly ludicrous designs, from small-but-perfectly-formed wooden coasters through 40-floor hotels to whole-park copies of places like PortAventura — as well as no fewer than 24 Euthanasia Coasters built by sadists similar to me. The larger coasters and attractions have no place in Planet Coaster’s career or challenge modes, being typically too big or too expensive to jam into the play space you’re trying to maintain. But I ended up spending equal time picking out new designs from the Steam Workshop and plonking them down for a first-person test ride, with no intention of ever letting my guests have a go.

This was mightily weird for me, in part because I hate real-world rollercoasters (why would you queue up for three hours to feel horribly uncomfortable for two minutes?), but also because there’s no actual game involved in sitting through someone else’s carefully crafted rollercoaster. But so many of them are so good, I found myself transfixed at the artistry and devotion it must have taken people to arrange Planet Coaster’s playset into something so intricate.

As they do in the real world, movies and games have provided inspiration for coaster-ification among Frontier’s community. A Zelda-themed ride called the Wind Waker takes riders on a lollopping ride up steep climbs and down huge drops, and an unofficial Tomb Raider ride has a squadron of crocodiles snapping at guests as they whizz past. But my favourite download was a coaster inspired by PlayStation classic Shadow of the Colossus. The multi-layered coaster that takes riders on a minutes-long, multi-stage ride that pits them against three different colossi, each new area packed with pyrotechnics and water effects on an ultra-complex series of triggers. 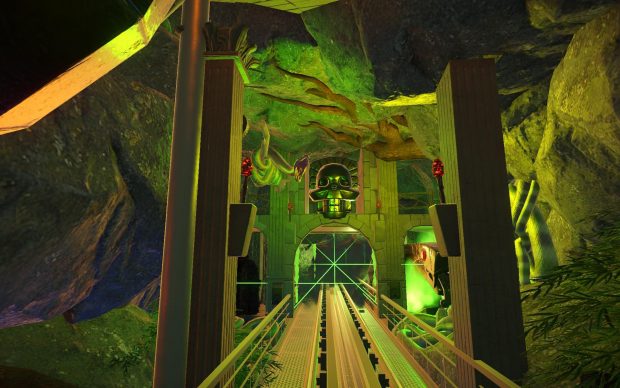 Frontier has already provided players with the core shapes and structures necessary to build wild creations, but in the few places it is lacking, players have made their own models available for download. It’s these third-party additions that allow creations like the impossibly complex Alien ride — festooned in green goo and complete with a clutch of xenomorph eggs — that’s currently sitting atop Planet Coaster’s Steam Workshop page.

It’s this community creativity that has sustained Planet Coaster since 2016, and made it worth plunging into now, even though its management side is still slightly underserved. Two years after launch, Planet Coaster’s career mode isn’t the game at its most thrilling, the scenarios providing neither enough guidance to get started, nor feedback enough to know exactly why you’re succeeding or failing. This stops it short of feeling like a truly great management sim, but marry this imperfect structure to a rollercoaster gallery — a window into the creativity of a PC community — and Planet Coaster becomes a much more inviting theme park in which to spend a day. If you have the patience, the designer’s eye, and the dedication to actually build one of your own creations — your own rollercoaster of love — then Planet Coaster has almost everything you need to start planning for your new career in theme park development.