Who says games aren’t educational? When I woke up this morning, I didn’t know the Korean word for “Red Zone.” That’s “Red Zone” as in, the randomly selected section of Playerunknown's Battlegrounds’ map that becomes an artillery test site for a time every few minutes, and “Red Zone” as in “the roving death circle that you really don’t want to be stuck inside.”

Now, thanks to three helpful Korean guys placed on my team in PUBG’s squad mode, I now know very well how to say Red Zone in Korean. My squadmates told me that I was standing slap bang in the middle of one during our game together, yelping the words repeatedly down their microphones as I sprinted across a snowfield, dodging howitzer shells in a dash to find cover.

(It’s “Red Zone,” by the way, transliterated into Korean as 레드존.) 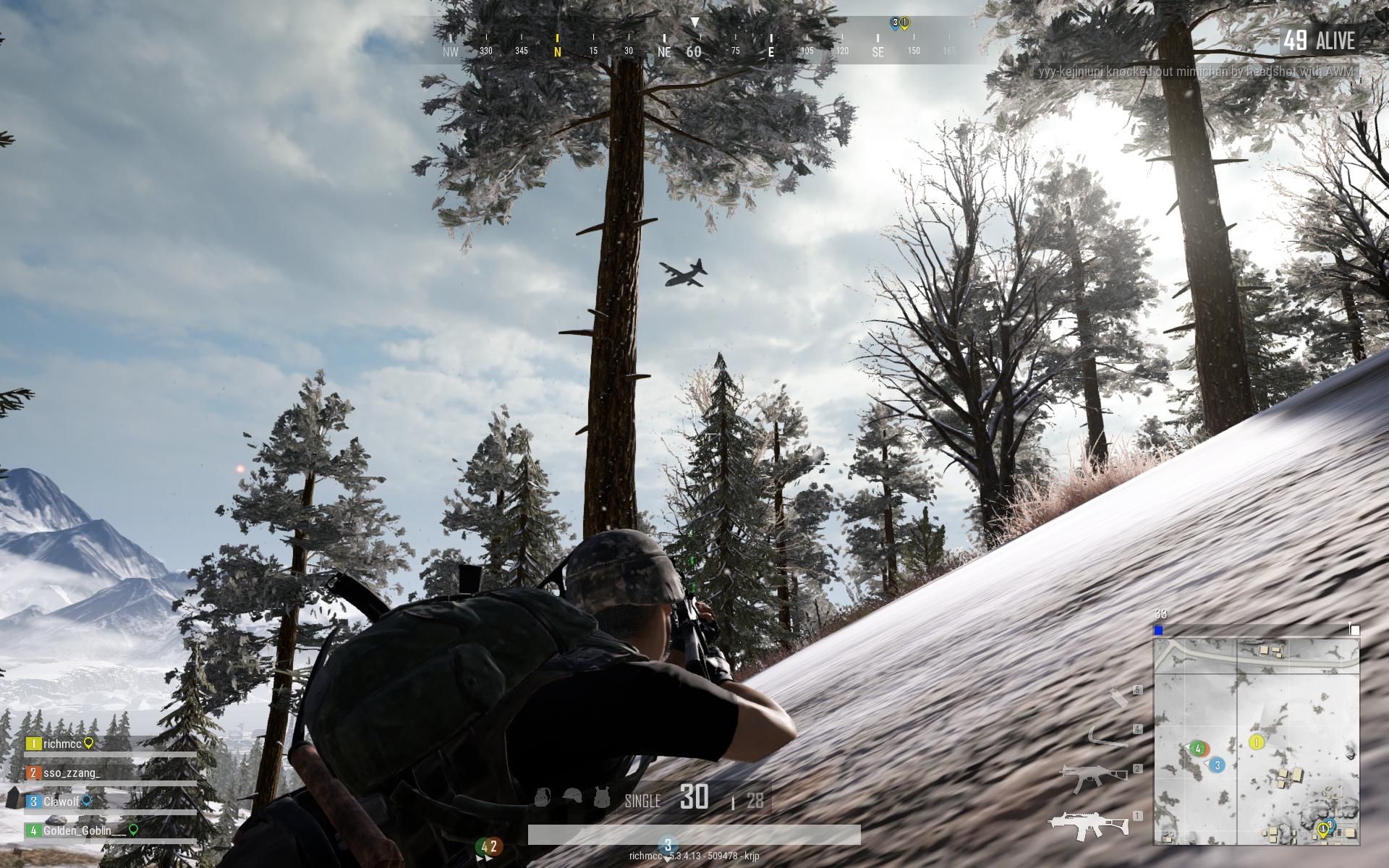 Thanks, guys. There wasn’t really too much I could do about the shrapnel rain falling on my exact position, but they did at least redeem themselves soon after, once I’d hauled myself into the nearest building and caught my breath. One threw down an energy drink, another a holographic scope that I quickly glued to my AK. Any residual annoyance I felt at being the subject of a triple-chiding drifted further away later when, with two teams left on the map, they welcomed me, my microphone off and my Korean nonexistent, into their attack formation as we began a four-person advance on the final ridge.

Moments later, they’d flushed out the two remaining foes, all that was left of the once four-strong opposing team, and I had my first Chicken Dinner win on PUBG’s newest map, Vikendi.

Vikendi’s a chilly place, with an imposing central mountain, dotted forests, and pretty holiday villas supposedly inspired by snowy resorts in Slovenia. For me, this frosty setting inspired a slower playstyle. I wasn’t sure if that was directly inspired by the icy stillness of the stage, or just the intimidating distances between its thickets of forest and clusters of buildings, but I found myself holing up in a defendable location more often than I would in the larger Erangel and Miramar. On those stages, I’d be more inclined to make the sprint over open ground to the next set of shacks, but here... baby, it’s cold outside.

The white snow makes poorly camouflaged players tempting targets, silhouetted dark in impractical jeans, t-shirts, and studded boots against their surroundings, but even well-prepared players are open to ambush. I spent a few minutes watching out of the loft window of a house west of the map’s Cosmodrome, scanning for enemies, before I saw a boulder move. Except it wasn’t a boulder: it was a snowsuit-clad foe, scanning the same horizon I’d been watching. I leaned almost apologetically out of the window and loosed an entire SMG clip into their back, and they stopped moving for good, flopping white against the snow like the rock I’d mistaken them for. 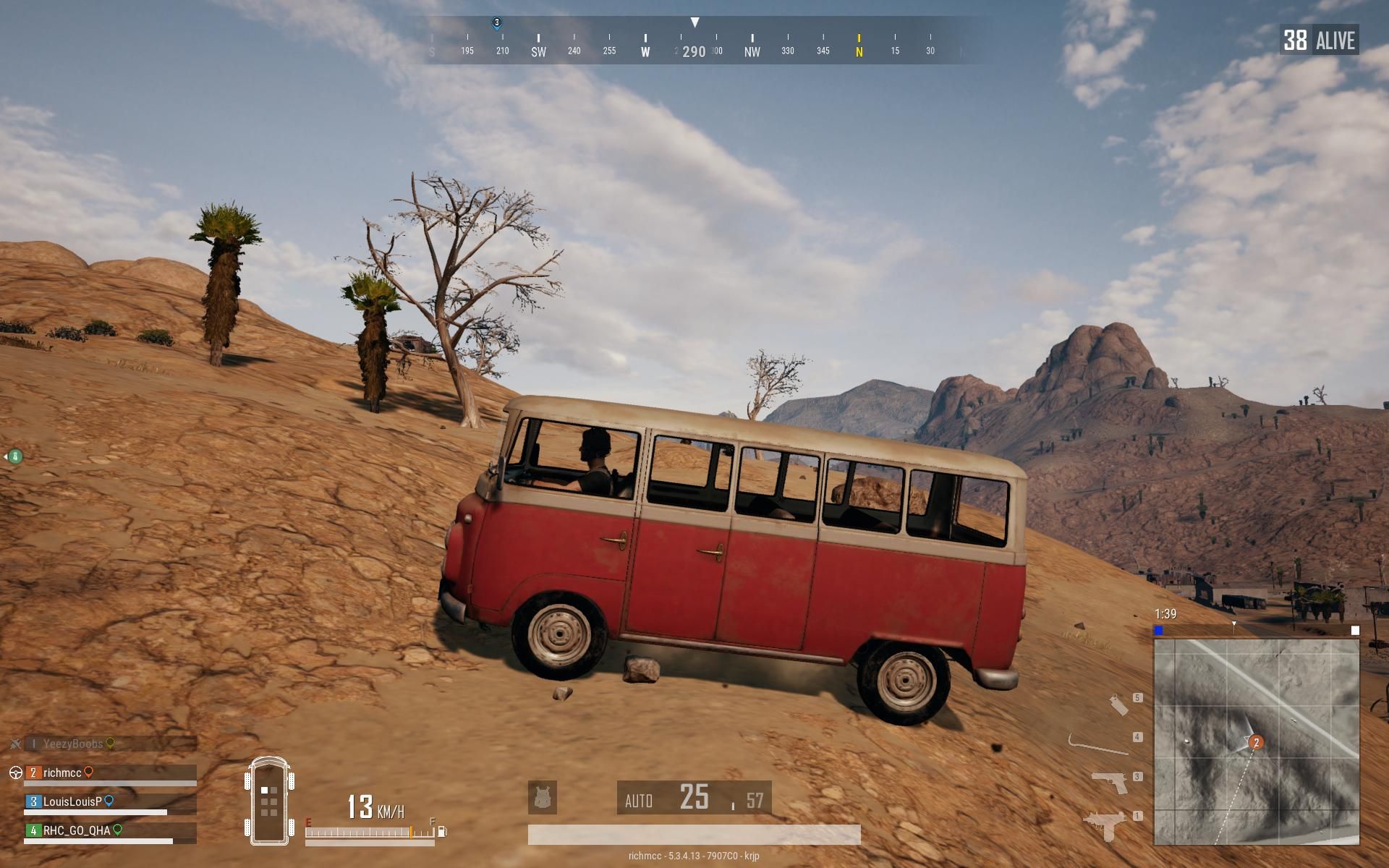 At six-by-six kilometers, Vikendi is the midway point between Erangel and Miramar (the first and second maps released for PUBG), and Sanhok (the third). It’s a nice size, in my experience, allowing for the kind of strategy and planning in movement that allows for ambushes and attacks from the rear, but not so large that the capricious blue circle demands you spend half of your game huffing to stay inside its confines. It’s walkable, largely, but I always spent more time than advisable trying to find a snowmobile rather than hoof it on foot. Snowmobiles aren’t much more than reskinned bikes, albeit slightly slippier across Vikendi’s icy earth, but they give the stage a sense of James Bond-y fun: a tangible variation on the norm for a game that’s a little po-faced against the competition.

The level’s dinosaur park is another nod at refreshing silliness. Although there’s no interaction possible with the Tyrannosaur guarding the door to the attraction, nor the sauropod rearing excitedly next to its rollercoaster, there are more memorable firefights to be had between the legs of prehistoric giants than there are in one of Erangel’s identikit sheds.

Sanhok, the other 2018 addition to PUBG’s map pool, also makes efforts to distinguish its settlements and sites of interest. Its Bootcamp and Ruins still attract a lot of attention at the beginning of a map, but they’re a touch too similar to the other maps’ military installations and outcroppings. Instead, I like dropping in to Bhan, a jumble of beams and bunting seemingly erected for a forgotten party. The guns are decent, for one, thanks to those especially rowdy partygoers, but it’s also so dense with cover that it’s easy enough to make an escape if you do get cornered.

That cover is at a premium on Sanhok. The island is so small (half the size of Erangel and Miramar) that, like Vikendi, it changed how I played. Vehicles, once vital for optimum looting and placement, became liabilities, the chug of a van engine a too-juicy target for enemies hiding in the jungle. In a map this small it’s better to walk, the increased population density making it vital to pick through loot locations quietly to avoid a fight until you’re ready. 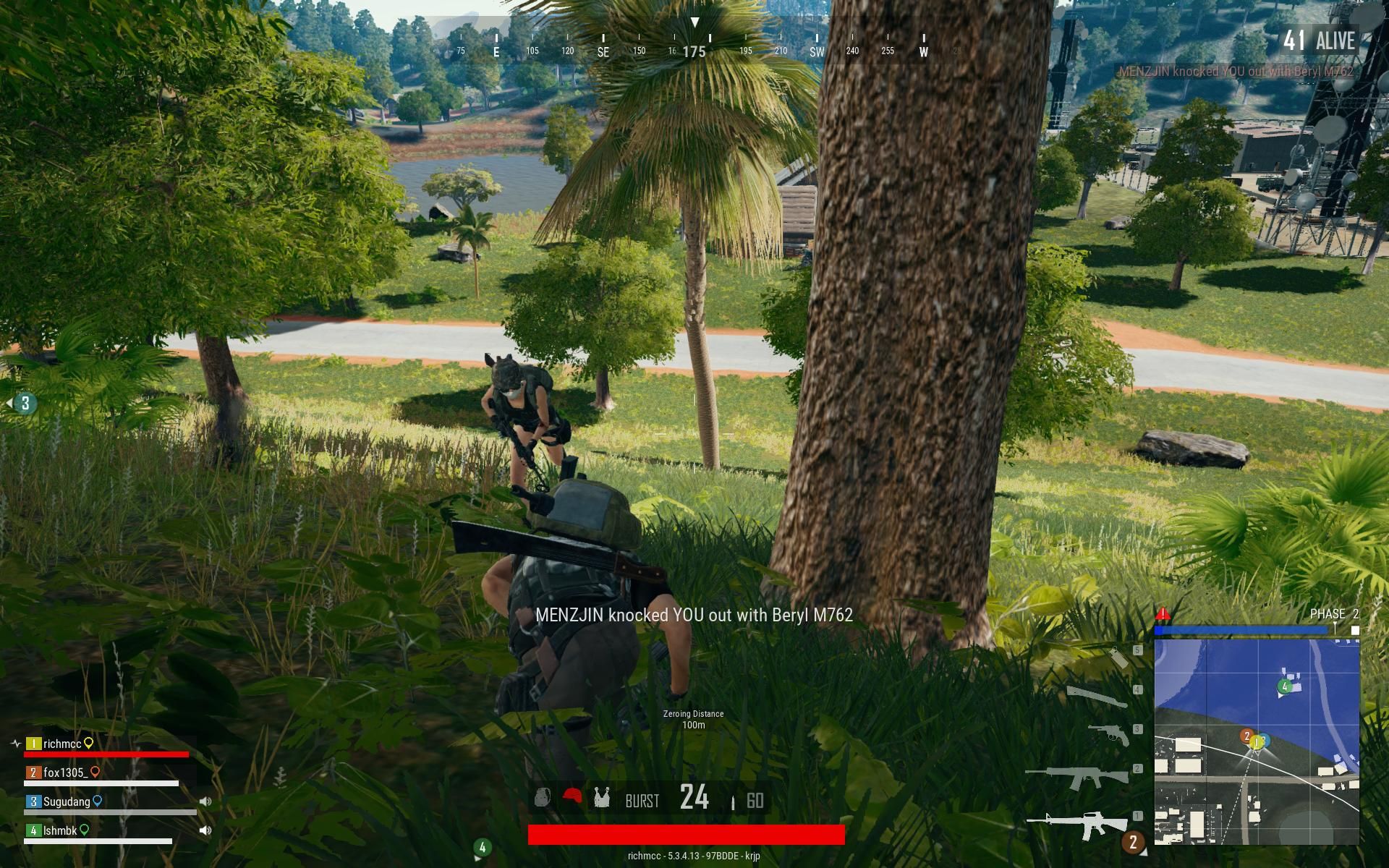 When those fights do come, they’re over quick. PUBG’s guns have always felt very killy, and that’s still the case against the battle royale competition. Where Fortnite’s weapons are floaty, and Apex Legends’ take their time to end a life, even the weakest entries PUBG’s arsenal can put an unwary opponent down before they can draw a bead on you.

Of the newest guns, I developed reasonable working relationships with the G36C and the MK47 Mutant assault rifles, as well as the big-clipped Bizon SMG. My favourite of these additions since my last sojourn in PUBG is the SLR, though: a booming marksman rifle that Ollie rightly points out as one of the game’s most deadly weapons. The SLR kicks like an electric mule, but I found I only needed the one shot to knock off the majority of a health bar, putting the fear into my opponent and leaving them open to some sprayed ammo from my secondary weapon.

This super-short time-to-kill lends itself well to Sanhok, where games are over quicker and new matches can be found without too much frustration. But on Erangel, Miramar, and even new map Vikendi, this lethality still sits a little strangely with the slower pace of the rest of the game. As the only battle royale on the block in 2017, it made sense for me to commit an hour to a game of PUBG, looting, shooting, and surviving, only to get unceremoniously plugged in the back of the head by an enemy I never saw. In 2019, with Apex Legends and Fortnite offering quicker and more efficient thrills, I’m more conscious of PUBG's increased drain on my time.

There are other frustrations present in PUBG that have been highlighted by more entrants in the genre it popularised, most notably in communication. I wanted to thank my Korean friends from before when they saw me safely out of the red zone, to assure them that I usually knew what I was doing, and to suggest the next step of a plan that would see us move as a unit. But only knowing the Korean for “Red Zone,” and without an integrated communication mechanism outside of emotes, I was scuppered. I tried wiggling next to a medkit, hoping to perform the interpretative dance for “thank you,” but my teammate had already moved on. I found myself pining for Apex Legends’ ping system, an innovation that I hope becomes as ubiquitous in the battle royale genre as the genre itself has become in the wider industry. 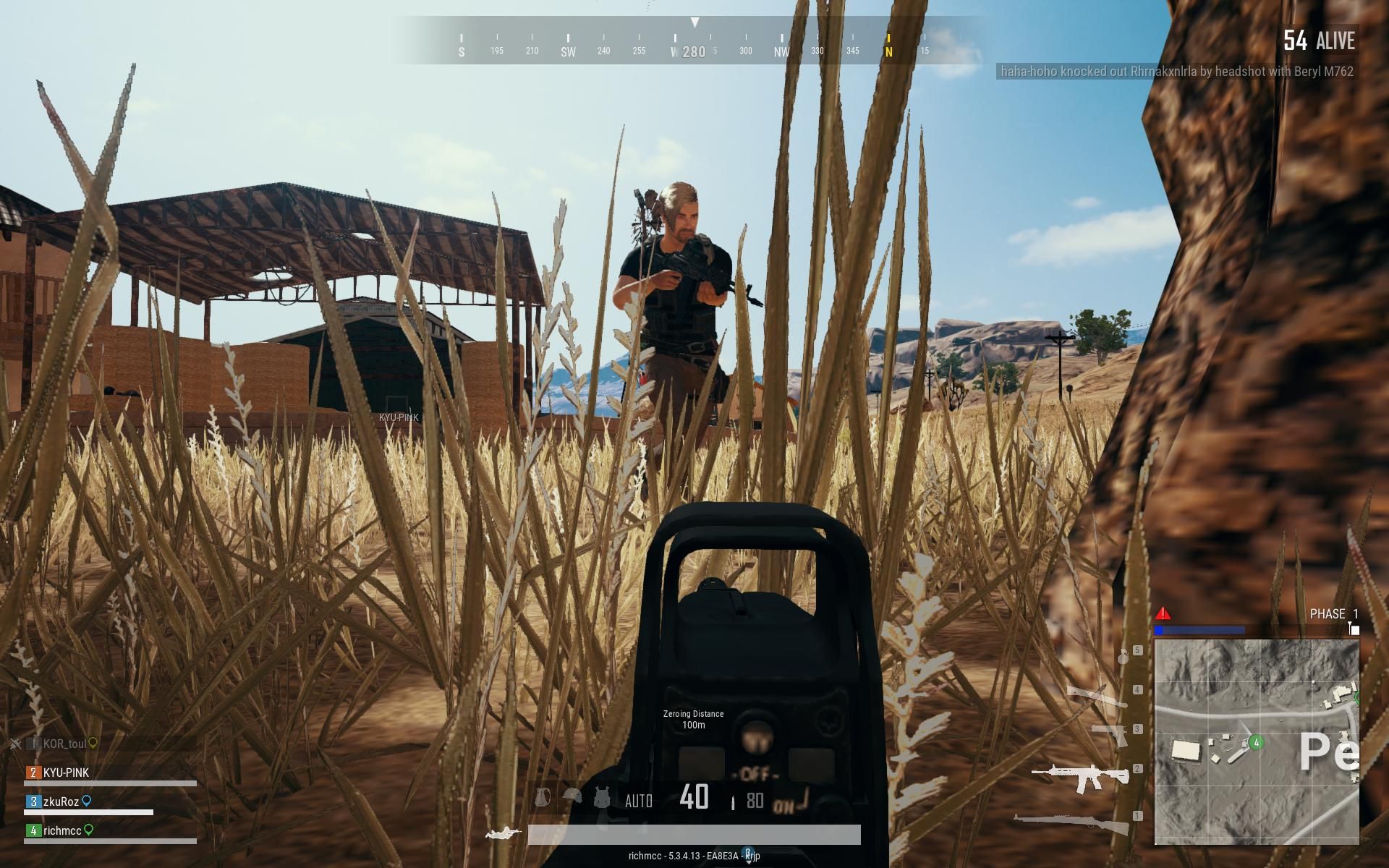 PUBG is the mother of that genre, and there are still things that only it can offer. It’s a slower, more strategic game than its peers, and the scale of the stages allows for the kind of grand plans that let you pull three friends into a jalopy and jump it onto an apartment block roof. But it’s hard not to play PUBG in 2019, with its slightly awkward UI and item collection, its slightly ugly copy-and-paste shacks, and its slightly lacking customisation options, and not see that its children have moved faster in making the genre more welcoming.

That’s represented in the game’s Steam statistics, which show PUBG’s average monthly players dropping from more than a million-and-a-half in early 2018 to less than 500,000 a year later. Recent efforts to improve performance, matchmaking, cheat detection, and other backend elements, part of a concerted effort dubbed “Fix PUBG” by the developers, have seen a small upswing in users, but the reality is that the game is simply no longer the only battle royale available, and its rivals have had time to put together slicker products.

PUBG’s updates have ensured that there’s still good reason to visit its islands -- not least because there are four on offer now, with a revamp of Erangel planned soon -- but if you want a short battle royale break rather than hours away, it doesn’t need to be the de facto destination any more.