“Golf is a good walk spoiled,” Mark Twain is supposed to have said. If he was writing about videogames in 2018 (and not, you know, dead for the last century), I think old Twainy boy would have said the same about PlayerUnknown’s Battlegrounds.

PUBG’s huge new Miramar map is starkly beautiful. It's a warm and sandy coastal area that would be ideal for a beachside stroll — were I not being shot at every few minutes. It’s as large as Erangel — the eight-by-eight kilometer stretch of lightly wooded land that until recently served as PUBG’s only map — but feels more expansive. Some of that is due to the decor: the desert-ish Miramar feels more open because it has fewer trees, bushes, and hedgerows to provide cover. Darting between buildings was dangerous in Erangel, but foliage allows the player to break up both their journey and their opponents’ line of sight. Make that same trek on foot in Miramar and you’ll find yourself silhouetted against the undulating sand for lethal seconds at a time, an easy target for anyone who happens to be looking down a rifle scope.

There are wider gaps between those buildings, too. More so than its predecessor, Miramar is built from self-contained settlement pods. The focus here is on larger villages and towns, each one feeling more like designed combat arenas than some of Erangel’s cut-and-paste clusters of outhouses. This helps to give the map’s areas a more coherent flavour, differentiating north from south, east from west. It also helps funnel players into killzones, making it more likely that they’ll come into contact with opponents as the ever-shrinking blue circle forces everyone to make a move into already inhabited spaces. 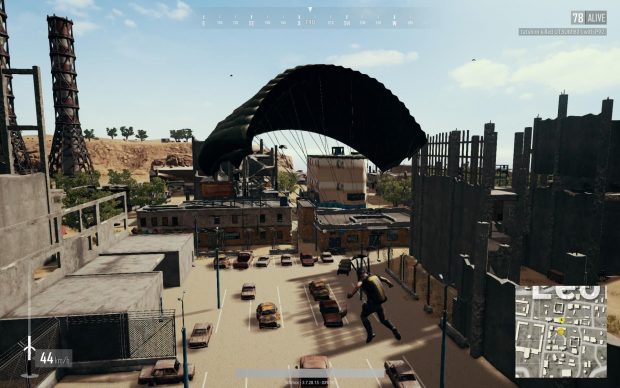 The biggest of these towns is Los Leones: a large coastal settlement that dominates the south-east of the map. Los Leones is as close as vanilla PUBG has got to a Call of Duty level, with half-finished buildings, car parks, and stubby concrete terraces making blocky and angular shapes against the horizon. Ambushes are easy here, especially from above, and especially when you’ve got a Kar98. I found one of these semi-rare sniper rifles at the top of a scaffold during one solo match, and paired it with a double-zoom scope I picked up from a scruffy house a few minutes earlier. With their power combined, I was able to pick up a brace of kills from players trying to make their own fortune in the city — that is, until someone down below heard my Kar98 bark and came upstairs to claim it from my cold, dead hands.

The power of elevation is also explored in Miramar’s wilder reaches. Where Erangel has gently sloping hillsides, Miramar has more dramatic relief: steep inclines, rocky outcroppings, and even cliffs. These spots can become powerful sniper nests; great if you’re the one hiding up amongst the high desert, but less fun when you get popped in the back of the head by someone hiding behind a rock. Trying to winkle out an attacker is tricky from these elevated positions, too, but PUBG’s renovated jumping system makes it a little easier to plan your assault.

The space bar now allows players to vault over fences, clamber onto raised rocks, and — most useful — hop through ground floor windows. These windows open up new tactical avenues, meaning you can bypass guarded doorways when assaulting fortified positions, and get the drop on opponents. This is a nice change: previously it was too easy to hold down a room by simply training your gun on the only entrance - especially in a world where grenades were temperamental at best. 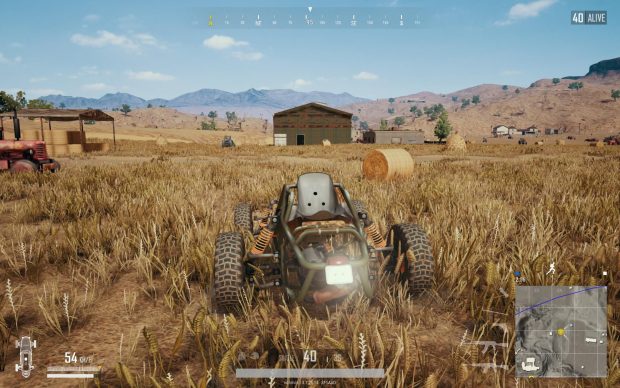 The changes to movement enable a more fluid and aggressive play style that fits well in PUBG’s new events mode. The developers introduced these events just last month, but the rolling suite of one-off game types have shown themselves to be sillier and shootier than the standard battle royale. The first of these pitched 8-player squads against one another, then there was Tequila Sunrise, which ran in early April and gave players shotguns and melee weapons for close-range battles in a much smaller safe zone. I dipped into its sequel: a 10-on-10-on-10 deathmatch appropriately called “War,” which provided players with high-powered assault rifles and made them fight over a speck of land.

War brings PUBG dangerously close to a standard team deathmatch shooter, the miniscule map size and constant reinforcement respawn ensuring that not only will you see players on the ground, you’ll spot them as they parachute in to land. It’s a stark contrast to the emptiness of PUBG’s standard mode — crouched in a dark room, my rifle pointed out the window at the killing floor below, I got more kills in four minutes than I did in my tens of hours in battle royale mode.

PUBG’s shooting is military-minded, bullets both brutally efficient at downing enemies, and a little tricky to aim. It’s a slightly irregular fit, jamming this realism into the manic War mode, where the soft pings of shell casings and other incidental details are drowned out by the constant thump of other players’ guns. That makes PUBG’s events feel more like weekend diversions than the future of the game, but their inclusion hints that in an increasingly crowded market, the PUBG Corporation is willing to try some new things. 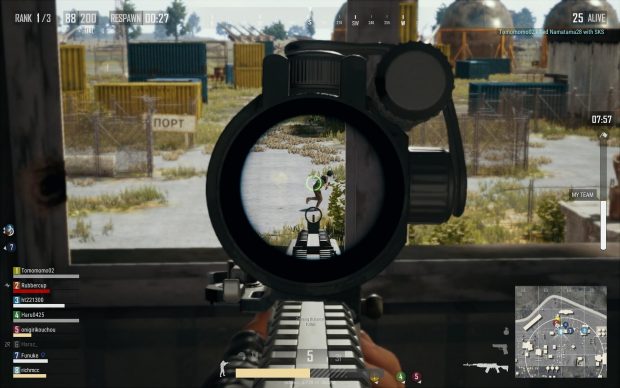 The developers have already laid out their road ahead for this year, a plan that involves the introduction of new weapons, emotes, and two smaller four-by-four kilometre maps. They’ve also promised to tackle the cheating epidemic that has plagued the game in recent months — a serious bone of contention amongst the PUBG community. The game has been carpet bombed with negative Steam reviews in recent months, and a sizable majority of these have pointed to the supposed cheaters (specifically Chinese cheaters, many reviews claim) as their reasoning. The proposed solution, echoed across hundreds of reviews, is a server region lock.

I certainly got killed by people I didn’t see during my return to PUBG, but I can’t say for certain whether I was the victim of cheaters. I’d almost like to think I was: that would explain away the times I stupidly blundered into obvious ambushes or leapt to my death from a roof, but I think it’s more likely that I was to blame. Cheating clearly is a problem at the moment — the PUBG Corporation itself has said so and is taking steps to curb the issue — but the game’s core conceit seems built to exacerbate frustrations on death. In Overwatch, death means a 30-second respawn timer. Even in Counter-Strike: GO, it only means five minutes maximum before you get to play again. In PUBG, death means back to the beginning, that time spent collecting guns, ammo, and armour definitively wasted. It's no wonder people want a scapegoat. 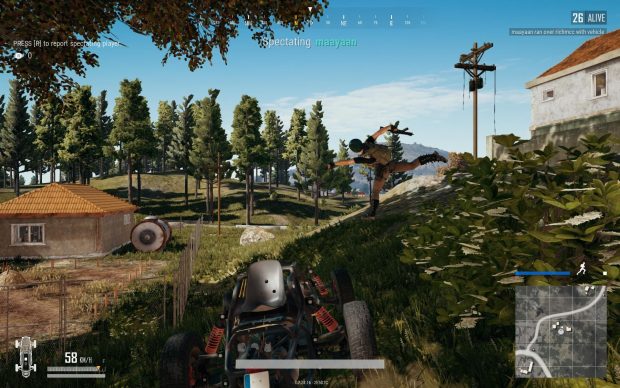 It’s not a uniquely PUBG problem. Fortnite — PUBG’s great and growing competitor — relies on the same battle royale system. But Fortnite’s gunfights are its payoff, the building system allowing for moments of violent creativity, and the more exaggerated weapons offering clearly signposted death. PUBG, on the other hand, is strongest in the stretches before player contact.

The PUBG Corporation has made strides to make its shooting more stable and satisfying with its updates, and the events have shown that the po-faced PUBG can also play silly when it wants to. But I play the game for the anticipation: the quiet time to yourself with which you can scavenge supplies and set up defenses, plotting with a friend or on your own. My favourite moments are these peaceful parts: the quiet thrill of stumbling across a defensible house, or finding a cache of weapons.

Conversely, the the worst bits are the noisiest: when I get shot in the back from a sniper I never see, or when I unload an entire clip into a doorframe because I was checking my inventory at the least opportune time. Or, most infuriatingly, when I get shot from 500 metres away after 25 minutes of scrounging and surviving — especially when there’s an acknowledged chance that the perpetrator was cheating.

Clamping down on the cheaters that it knows are there should remain the PUBG Corporation’s immediate focus — if only to assuage the fears of the people who’ve sunk 300-plus hours into the game but wouldn’t recommend it in its current state — but the game itself has retained its delicious tension. Like a good walk, PUBG is rewarding either solo or with friends, and like a walk, it’s more about the journey than the ending.