Serving as the prologue and tutorial to Hitman 2, Hawke's Bay is a small and condensed level with minimal roadblocks. Your single target is relatively open to assassination attempt, with lots of room for error so you can get to grips with the role of a master assassin. In fact, the game is kind enough to let you explore the whole place without any distractions at the start so you can map it out in your mind before the mission begins proper.

If you are just starting out, you might want to familiarise yourself with some tips on starting load-outs how to be an effective assassin in our Hitman 2 guide hub. If you'd like instead to get the Silent Assassin ranking, our Hawke's Bay Silent Assassin guide has you covered, but for everything else associated with the Hawke's Bay mission, read on.

The mission begins as a straightforward infiltration job on the beach house of terrorist cell leader Alma Reynard. You’re there looking for information on the “shadow client” – the mysterious figure who orchestrated all of 47’s contracts in the previous game. Though it’s not long before it escalates to a full-on assassination mission when Alma returns to the house to lay low after a recent job.

A handful of tutorial popups will first guide you towards the house and show you how to break in. From there you’ll have a chance to wander around, learning a little more about the less-than-tasteful activities Alma and her cell get up to. Once you access the computer that triggers the return of Alma, her lover Orson Mills and her security entourage. That’s more like it.

Once the deed is done, sneaking back out to make your escape can be a little tricky due to all of the guards. If they’ve found your boat, you’ll need to make a distraction to lure them away – if you’re averse to murdering them too. Luckily, there’s a truck parked nearby that’s loaded up with fuel tanks and ready to become one heck of an explosion.

You have just one target to eliminate in Hawke’s Bay: Alma Reynard. As Hawke’s Bay is the opening level, her routine is fairly straightforward with a handful of opportunities for you to slip in and secure the kill unnoticed. Pay particularly close attention to how she likes to take her tea and you might have a chance to slip something deadly into it first.

Alma’s pre-sleep routine opens up a few more chances to end her life too. You can take her out the old-fashioned way with some fiber wire while she’s brushing her teeth, all the while her clueless partner is showering right next to her. Or, wait until she’s cosy in bed and silently smother her with a pillow. Again, Orson doesn’t seem to notice a thing. Useless!

If you cause any sort of disturbance the guards will go on full alert and escort her into the panic room. That won’t stop you, though, as you’re more than capable of finding a way to reach her still via the roof or by strolling in unannounced yourself. 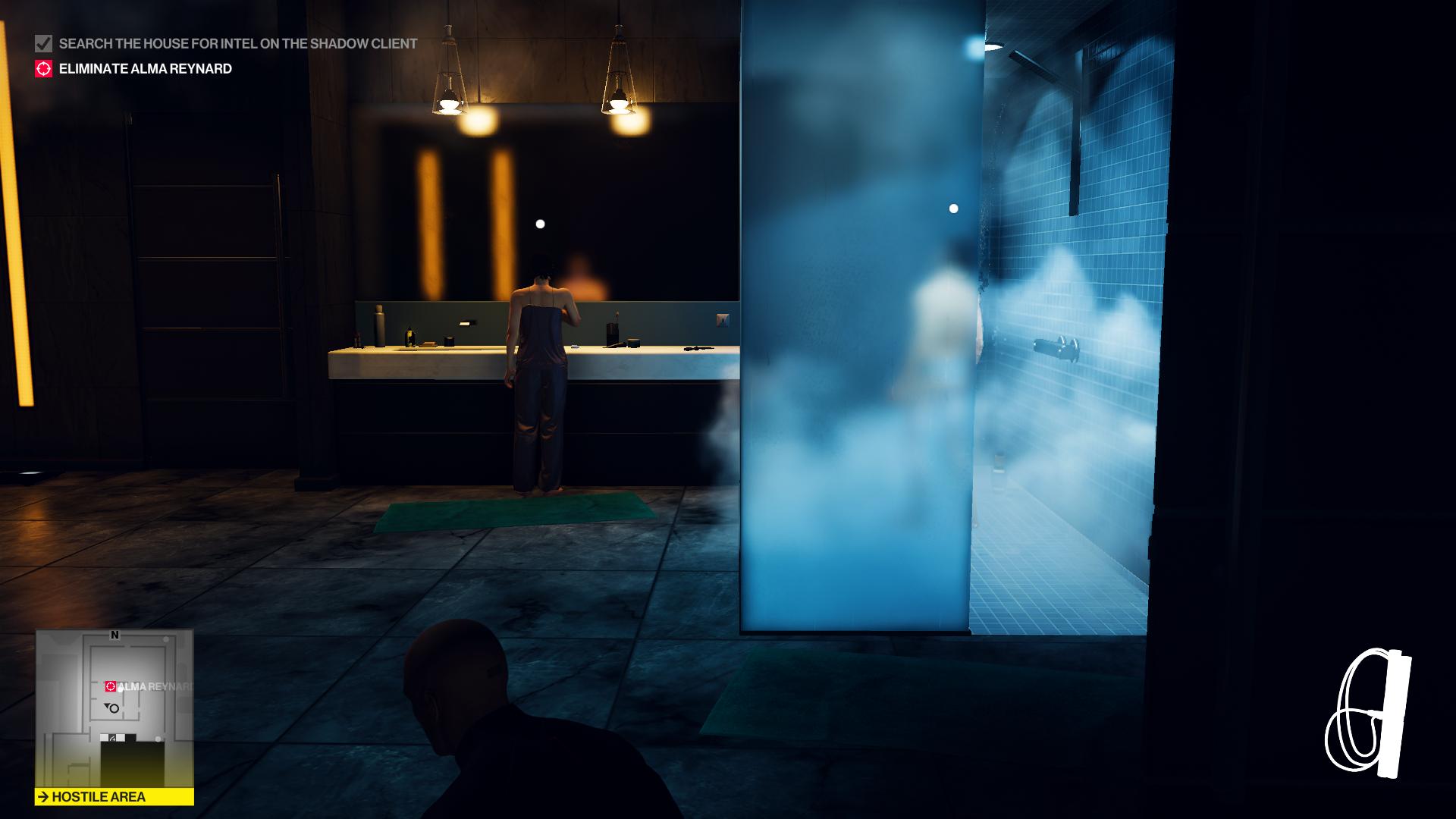 Main room - This room may be ginormous, but by Hitman’s standards it’s fairly barren with interesting things to do. A couple of potential weapons are lined along the kitchen wall and there’s some intel dotted around the for the lore nerds, but what’s most important is the honey and sugar pots on the kitchen counter. Alma does like a cup of tea before bed and conveniently stocks her home with all sorts of wonderful poisons.

Panic room - Being a notorious terrorist, it’s only natural that Alma has a panic room installed in her house. You can access it by adjusting the painting on the wall in her office. Inside is a veritable treasure trove of weaponry, from rifles and shotguns to shurikens and grenades. Good if you want to go loud. Inside, you’ll also find the CCTV hub (where you can erase any footage of you on camera), a lockpick and the password for her computer.

Roof - The roof of Alma’s beach house gives you a great vantage point over the entire level, thanks in huge part to the giant skylights up there. They may have been stylish at the time, but now they’re extremely deadly, giving you multiple shooting angles in the house. She’s even been crazy enough to put one directly over her bed, because who doesn’t love being woken up by the sunrise at 6am every morning? You can also find the house’s ventilation systems up here, which are ripe for some poisonous tinkering.

Hired Mercenary - This is the only disguise available in Hawke’s Bay and is essentially useless. You’ll have to subdue a guard to acquire it and it doesn’t grant access to any additional areas. In fact, many of the other guards will recognise you as an imposter. You only want to get it to complete the Chameleon challenge for the level. 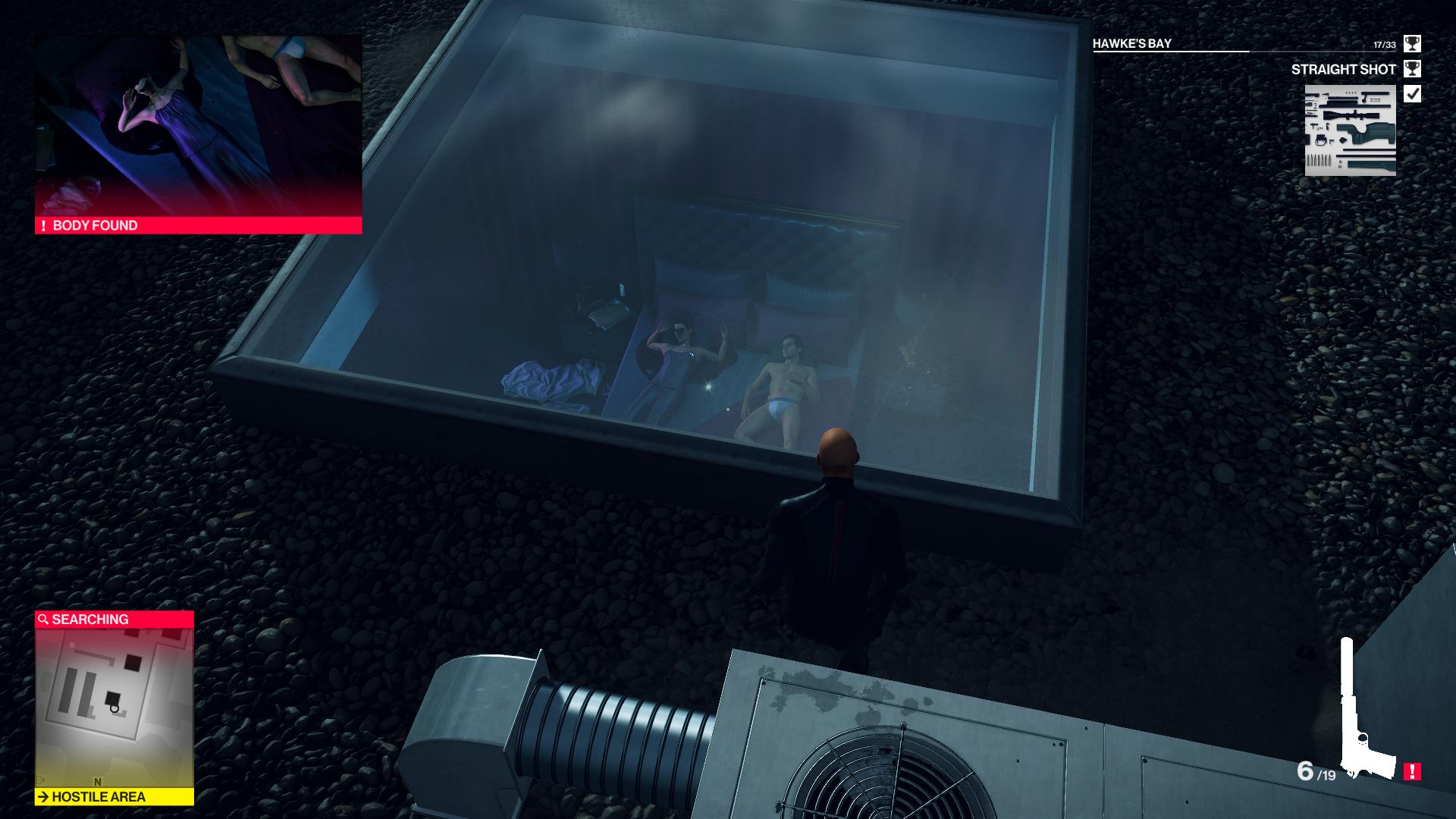 Rat Poison - Can be found sitting on the shelves in the storage room between the garage and the main room of the house on the ground floor.

Chloroform - Found in the back of the van in the garage. You can use this to poison Alma’s tea, which will then put the guards on full alert as they rush her into the panic room. From there, she’s a sitting duck to your preferred assassination method.

Squeaky Toy - Picking up one of these dog toys gives you an easy challenge completion. Look out for them on the floor if you’re sneaking around the house as stepping on one can alert anyone nearby.

Lockpick - A lockpick is sitting on the desk in the panic room. It can be used to open a set on doors on the first floor of the house that leads up to the roof, as well as a couple of cabinets around the house containing weapons and lethal poison.

That's the easy mission out the way, then. Next it's onto our Miami location guide. Or you can jump back to our Hitman 2 guide hub and choose your next destination from there.