If you click on a link and make a purchase we may receive a small commission. Read our editorial policy.
This is The Mechanic, where Alex Wiltshire invites developers to discuss the difficult journeys they’ve taken to make their games. This time, Raft [official site].

I have a real issue with the sea. That enormous blue conceals awful primal horrors which I can’t help but be fascinated by. So you can understand why I admire Raft, the survival game in which you try to stay alive on a rickety wooden craft constantly circled by a giant shark.

That shark is Raft’s principal antagonist and it sits at the centre of many of its survival mechanics (as observed by Steve Hogarty in his early access review of the game). Yet players have developed a strange relationship with it. “They talk to the shark and name it,” co-developer André Bengtsson tells me. So does his team: Bruce. “He gives you a kind of company out there, even though he’s trying to kill you.” 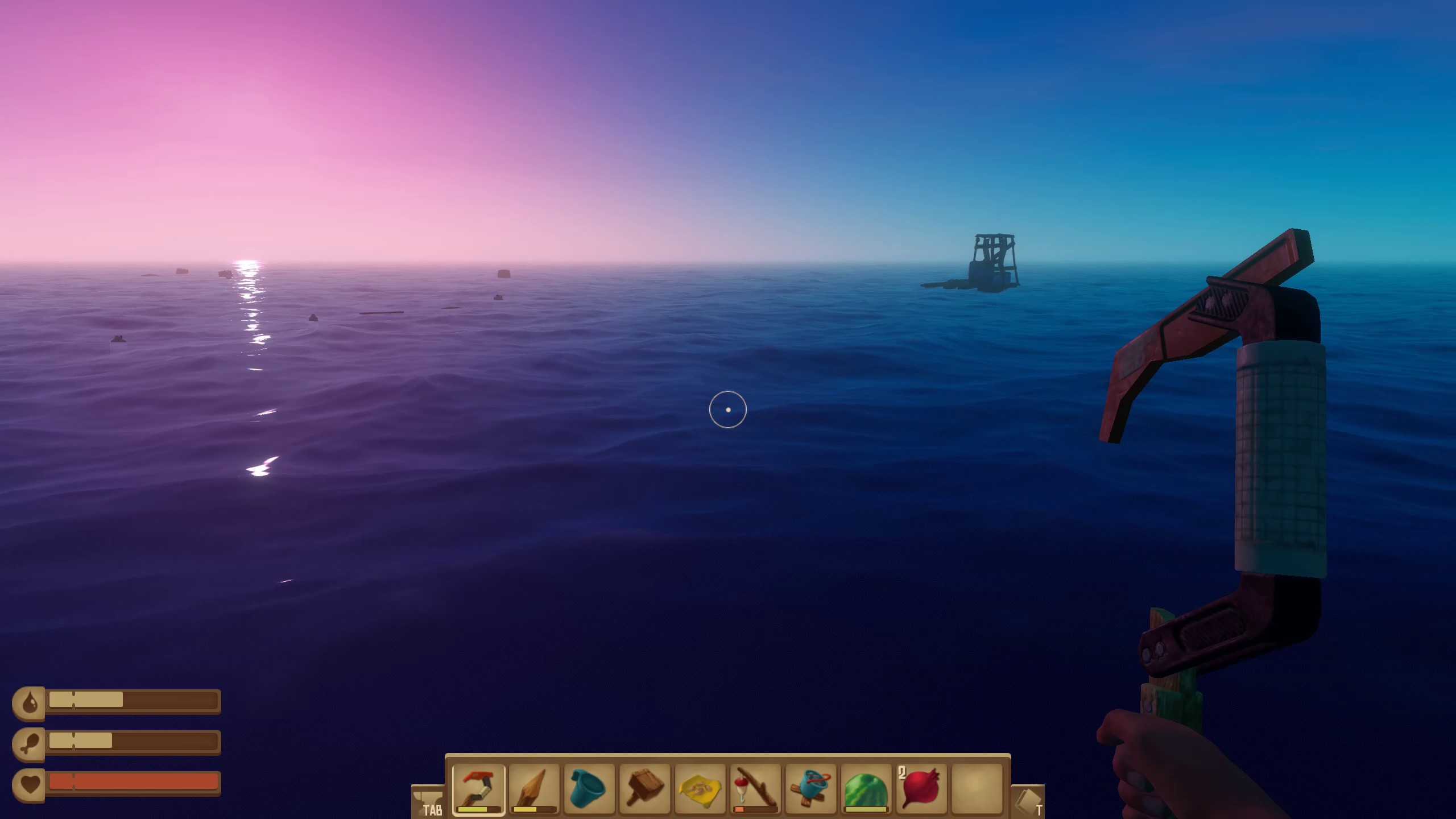 Few survival games feature such a personal relationship with their core threats. Outside their customary hunger bars, most employ endlessly spawning enemies and environmental conditions to keep you on your toes, whether night-borne zombies and skeletons, ice storms and fucking wolves, or ridiculous dinosaurs. But in Raft, the main thing which limits what you can do and where you can go is a single scary fish.

Raft started out as a student project at the University of Gotland, with a simple prototype in which all you could do from your raft was to hook nearby floating planks and pull them in.

“That obviously led us to wanting to add more to the game, and one of the first things we realised is that there was no pressure for people to do anything,” says Bengtsson. “So we added the grill and water purifier to allow the player to survive thirst and hunger, but quickly the issue arose that people could jump into the water to collect stuff instead of hooking it.” 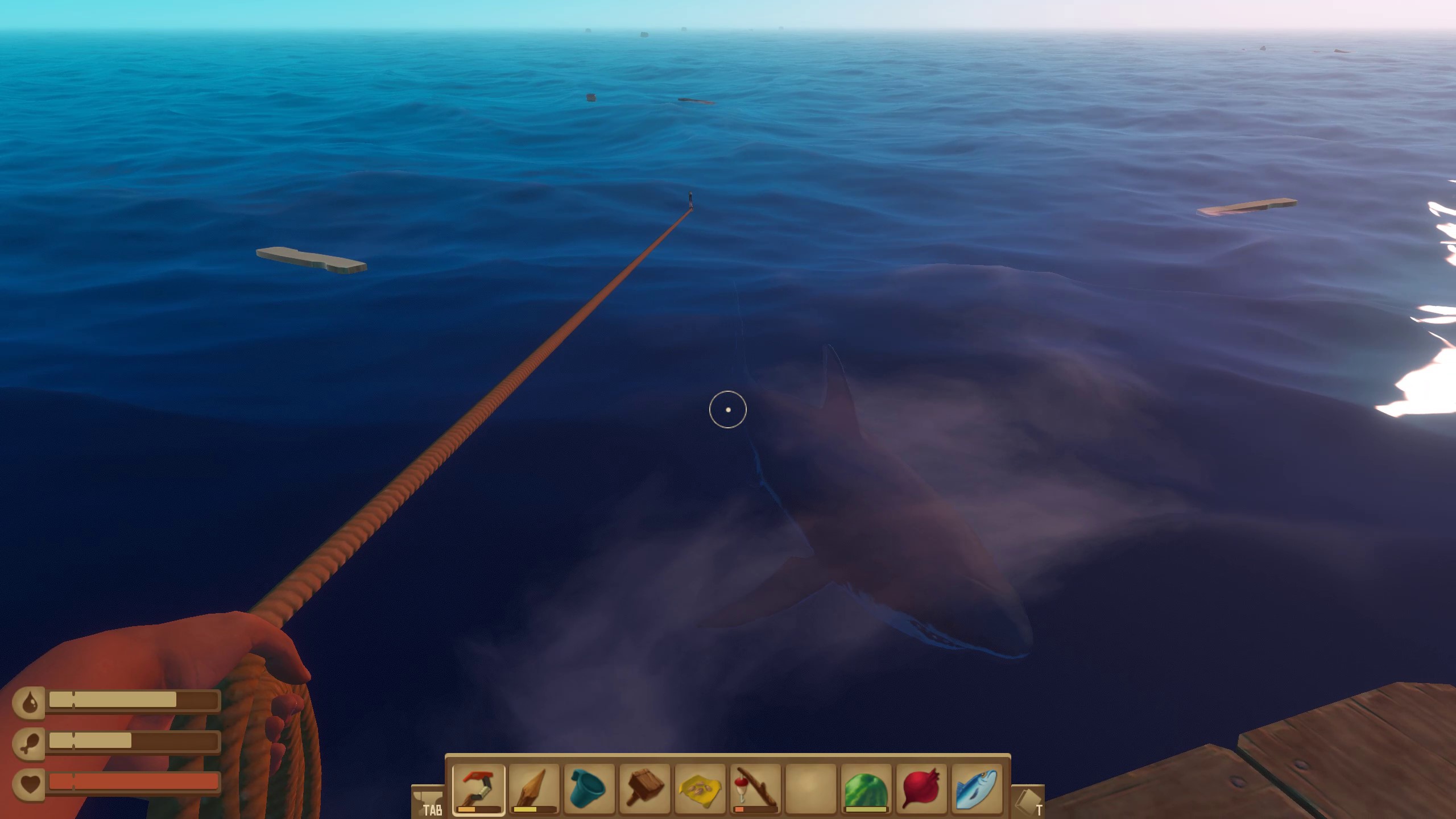 Energy-sapping cold water could have also stopped players from going in the water, but the shark was a far better solution. As soon as players jumped off the raft, the shark would zoom right at them and start dealing massive continual damage, a perfectly natural - and fearsome - threat for Raft's lost at sea theme.

The shark also opened the way to more solutions. Developer Redbeet wanted the raft to be under constant pressure of damage, so they added a new behaviour: the shark would swim up to the raft and start chewing on its edge until it destroyed the section.

“He became a big problem, because you’re so focused on getting stuff to survive thirst and hunger,” says Bengtsson. “If he bites the piece of the raft your grill is on, you lose it. It’s a good way of raising tension.” 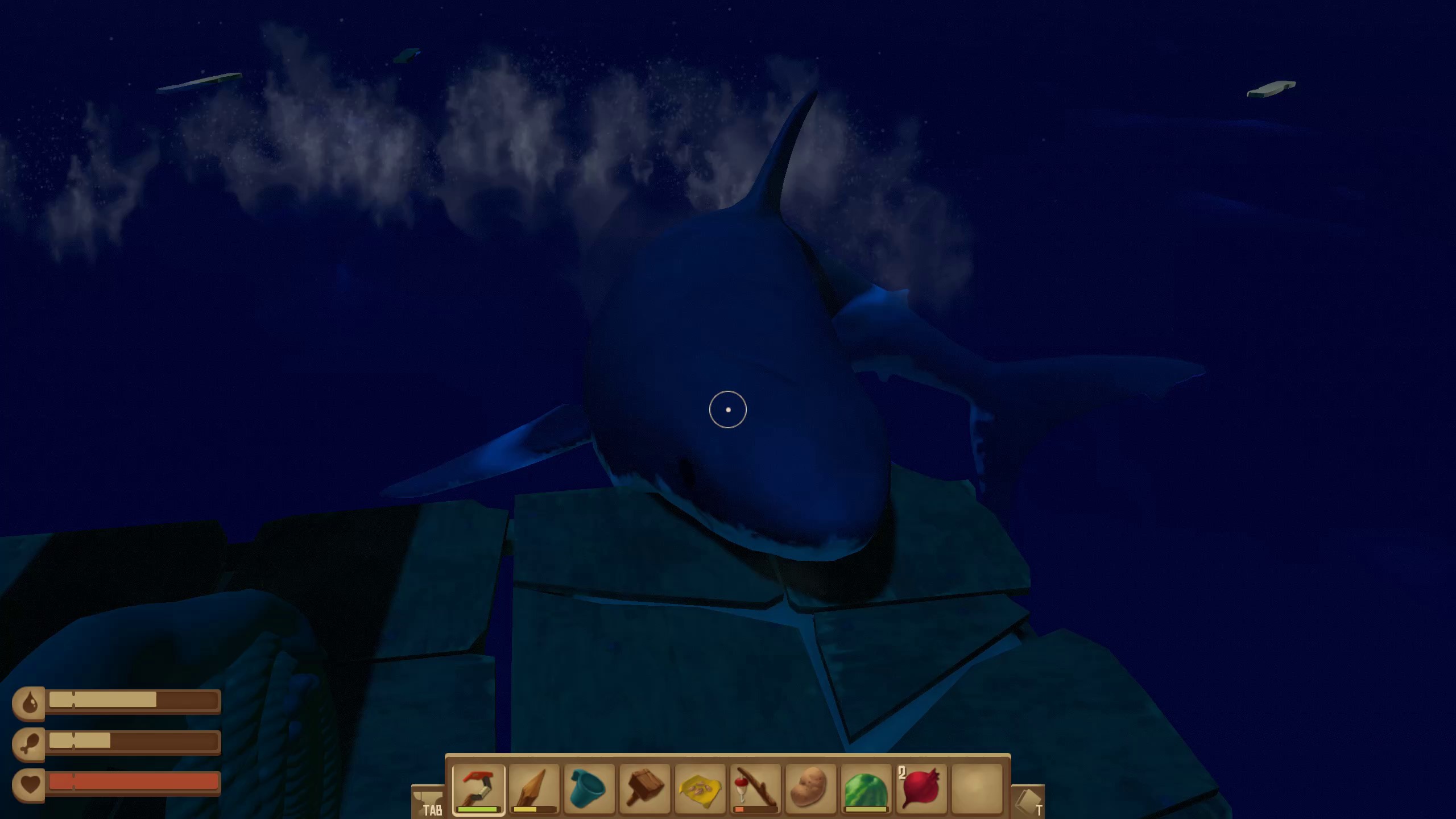 So Raft’s shark is a multifunctional beast, a shadow in the water which deals sporadic attritional damage which you need to spend hard-won resources to repair, as well as a mortal danger in the places where you’ll get those resources.

And it’s proved a great deal of challenge to develop, the main thing being the need to make it seem dynamic, unpredictable and interesting – and not simply a robotic killing machine.

One of Redbeet’s solutions is to play with the shark’s visibility. Apart from a few minutes after being killed, the shark is continually being simulated somewhere nearby, but you can’t always see it. Redbeet have it surface so its fin knifes through the water, and other times it goes deeper so it’s invisible or barely perceptible. The effect is to make you feel that you should be keeping unblinking watch. 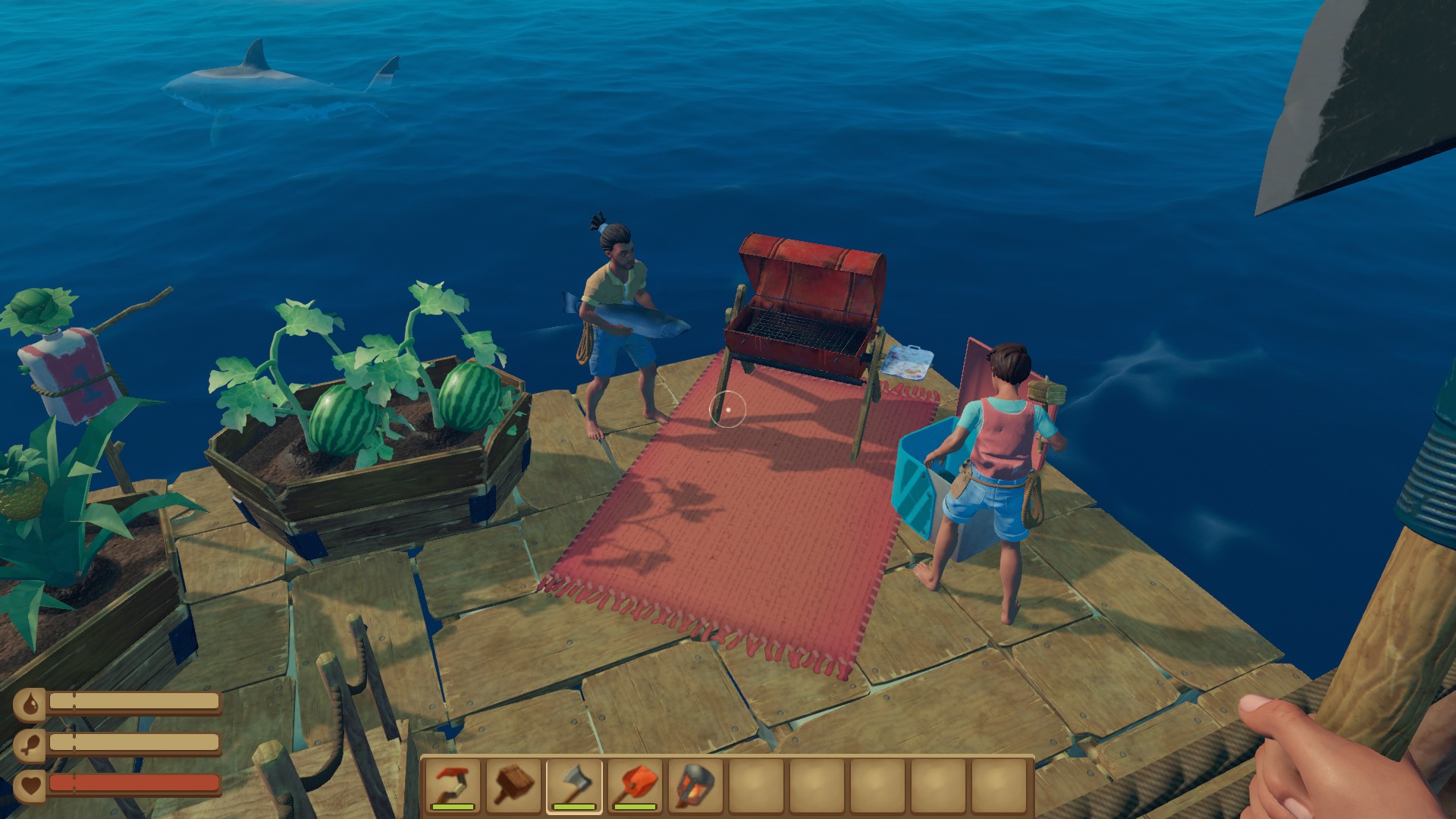 While the shark started out as lethal, it was demoted to very dangerous when Rebeet added islands and reefs to the game, locations rich in resources which you’ll need to dive to recover.

“The shark became more about making it less easy to collect from the reefs,” says Bengtsson. “We wanted it to be very difficult when you went into open water off your raft, because we wanted people to treat it like an actual danger, but when you got to a reef you had to be able to swim around a bit and gather.”

One way Redbeet massages the shark’s danger level is by reducing the range at which it’s aware of you when you’re on a reef. The island helps, too. You can check if you can see which side it’s patrolling and then quickly nip into the sea on the other.

“You feel you can hide from it a bit and outsmart him,” says Bengtsson. “It was quite difficult technically to stop him seeing you through the island - there were issues with Unity’s terrain and colliders, so he’d bug through islands. There’s been a lot of technical issues with him.”

They also added a way to directly manage the shark: bait in the form of a couple of fishes bound up with rope which keeps it busy for a while.

“It works pretty well because the bait is a resource drain; you have to gather something to deal with him, which creates a nice loop,” says Bengtsson. “And it’s time-limited, so you know you only have while before the shark is out looking for you again. That creates tension, especially as on the reefs you’re always looking at what you’re gathering, so you’re always wondering if your back is clear. Is he behind me? And sometimes you turn around and you have jaws in your face. It creates a lot of good moments.” 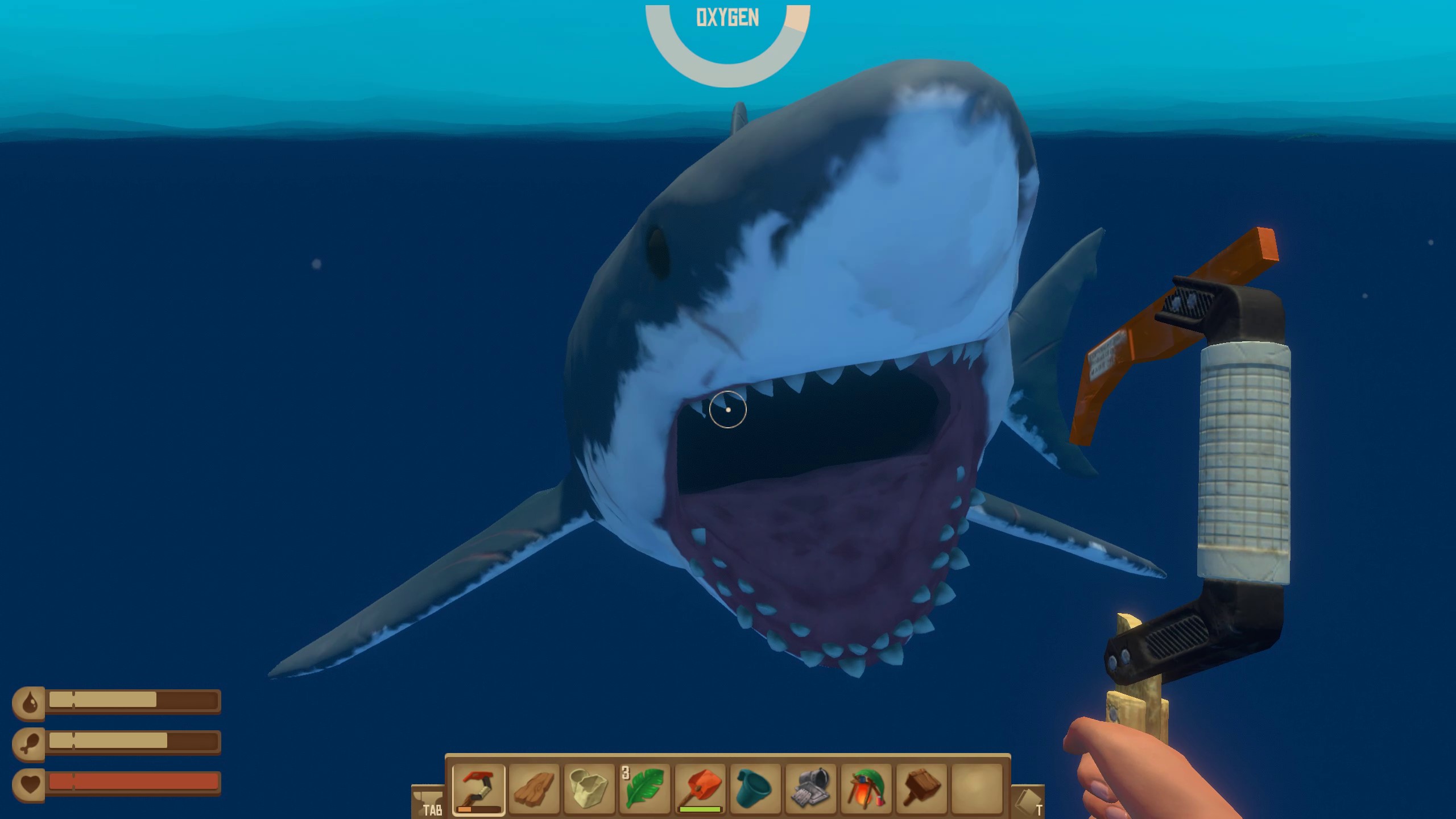 Then Redbeet added one more way to interact with the shark: a brief window during its attack in which you can stab it in the maw with your spear, causing it to disengage and swim away for a while.

It’s a high-risk manoeuvre, usually performed under the pressure of running out of oxygen or health, so for most players it’s a last-ditch attempt at survival. But some players figure themselves as shark trophy hunters. You get to mount its head on a board when you kill it, after all.

Your other key reward is a few minutes of peace before a new shark spawns, though if you’re playing in hard mode, there’s a chance that two sharks will spawn. “The most you can get up to is four, and that’s very rare. People wanted a bigger challenge in the game, and that’s been a very difficult thing for us, deciding how difficult the game should be.”

After all, the object of the game is not to kill the shark, it’s to survive. “The shark is there to provide tension and danger, but it would be boring if you could never kill the shark,” Bengtsson says. 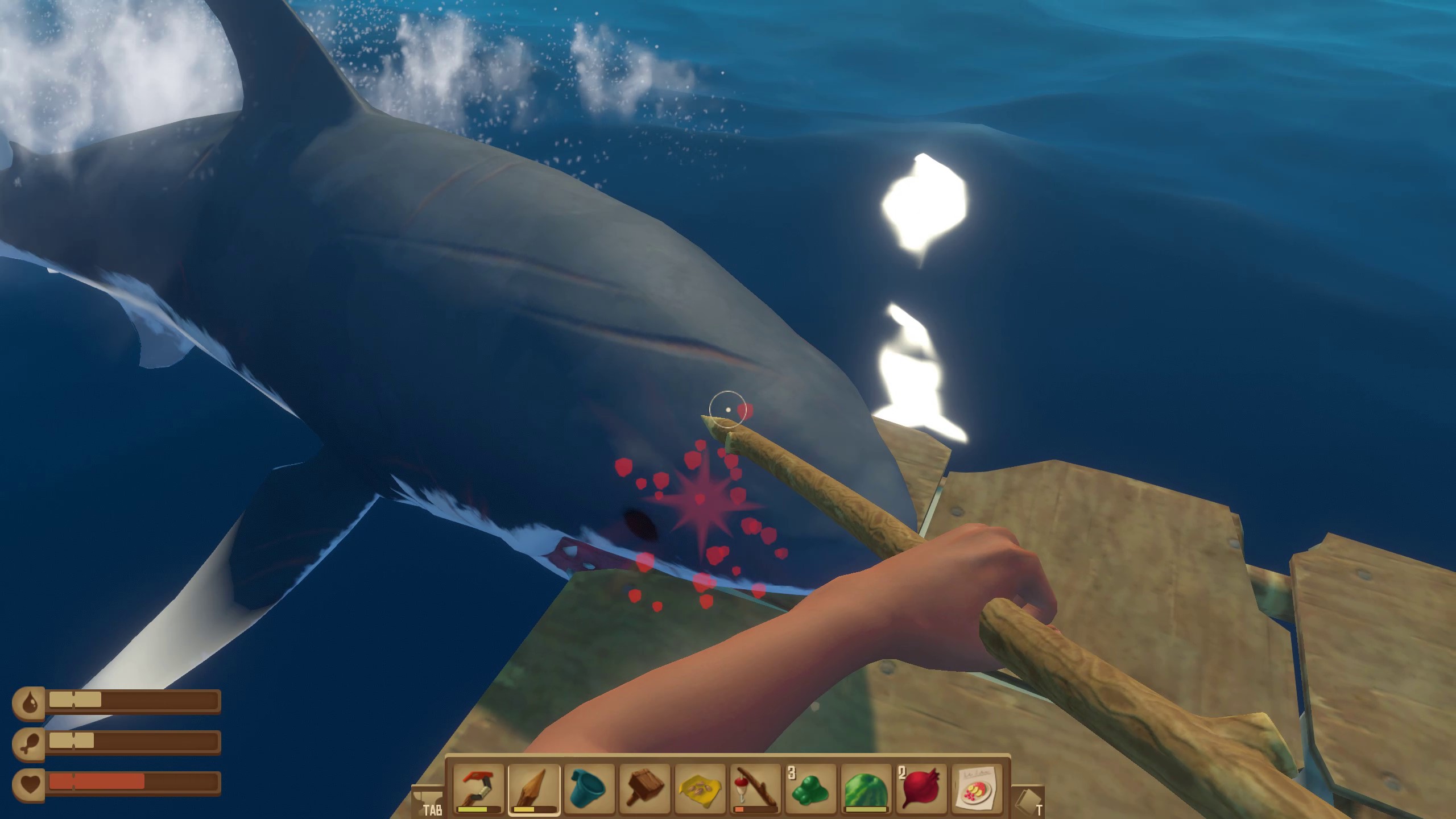 Dissuading players from trying to kill the shark has been a difficult balancing act. It has to have enough HP that it’s formidable, but it has to be vulnerable enough that if you do go for it you can win, and that it feels a natural part of the world. Some of that effect is down to the way its body starts to bear the scars of your attacks.

This balance now seems struck, since few players focus on trying to kill the shark, but it still represents a contradiction that lies at Raft's heart. The shark embodies many important survival game systems, yet you want to eradicate this thing that drives a lot of the fun of the game.

The same contradiction lies in less direct ways of neutralising the shark. You can add metal armour to your raft's foundations which makes them invulnerable to shark attacks. If you fully shark-proof your raft, which takes a fair amount of resources and time, you no longer need to worry about the attritional damage it causes.

Redbeet only made foundation armour impervious - by preventing the shark from targetting it - in November last year, but it was a hard decision. “We think it can take away from a big part of the game,” says Bengtsson. “Do we want to give people what they want, or what they think they want, or should we try to make the game as good as we think it can be? It’s not always that the thing the player wants that makes the game better.” 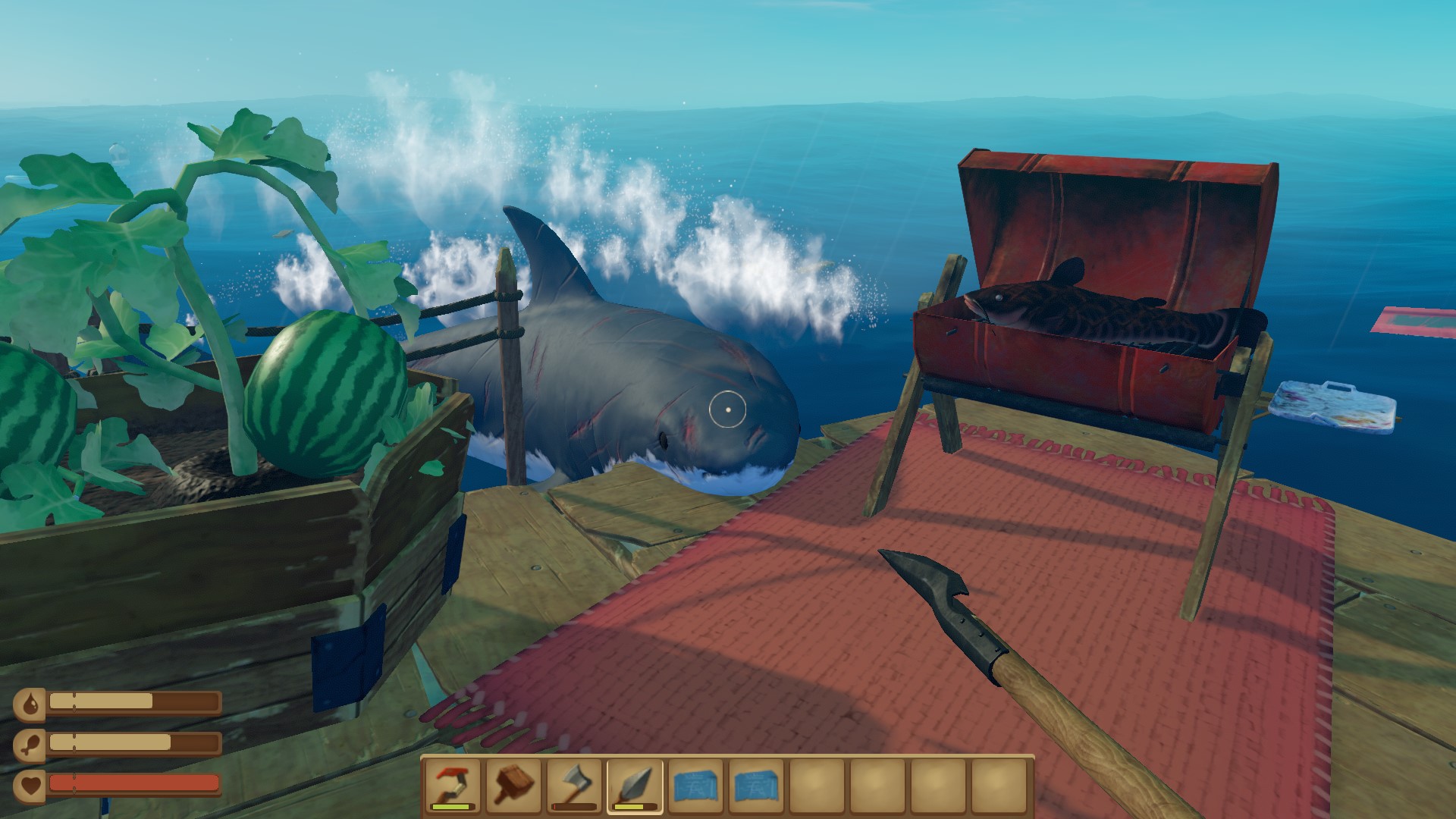 What he really wants to avoid is to create permanent fixes. So, for example, the scarecrow, which prevents birds from attacking crops you can grow on your raft, needs constant repair. “The scarecrow could have made crops safe forever, but then you fix the problem forever and that’s not fun. You have to maintain stuff - you rarely get something completely for free in resource management games.”

But while Redbeet wants to design a finely balanced and rewarding game, it also wants to give you freedom to play as you want. It's not realistic that you can build ladders on your raft which lead high into the sky, or that you can build a raft the size and shape of the Titanic, but since players have fun building them, Redbeet kept it possible. And if players want to invest their efforts into building a raft that the shark can't harm, then they settled to allow it.

We want to get around or negate all the things in survival games that stop us from doing exactly what we want, but I wonder if Raft's shark is an example of why most other survival games aren't built around a single ferocious but killable limiting factor. But that doesn't take away from the shark’s impact on Raft, where it enacts so well the terror of surviving on a few boards of reclaimed wood above an endless watery abyss.