If you click on a link and make a purchase we may receive a small commission. Read our editorial policy.
Premature Evaluation is the weekly column in which Steve Hogarty explores the wilds of early access. This week, he's sailing away on the crest of a wave in splishy splashy ocean survival sim Raft.

You’ll have heard of Raft. It’s the best open world survival crafting there is, for the singular reason that rather than having to run around to discover and excavate resources, they’re all swept towards you on a never-ending tide of stuff. Plastic, wood, leaves, potatoes. All you have to do is catch the detritus with a hook on a string and then yank it towards you, so that it becomes part of your raft and your raft can grow larger and more elaborate.

Minecraft, for all its supposed complexity, is hamstrung by a rude insistence on making you walk around on foot like an idiot, checking under leaves for magic rocks or whatever the hell that game is about. Raft is a survival crafting game for the brilliant, but chronically lethargic creative mind, who would rather sit and let content wash over them than head out in search of it.

You begin life on a two-by-two bit of wood, bobbing around the middle of the ocean like you’re the star of some gritty Captain Birdseye origin movie. This is the titular raft, the tiny foundation from which you can start to build out your multi-storey, fully furnished boat. Luckily the ocean is absolutely heaving with either flotsam or jetsam, or perhaps both, providing you with ample material to construct new floor tiles and fashion the basic equipment required to stay alive. A hunger meter and a thirst meter tick down as surely as they do in real life, applying a constant low-level pressure to scoop seawater into cups to be purified – there’s no Kevin Costner piss-filtration here – and throw fish on a grill to be cooked. 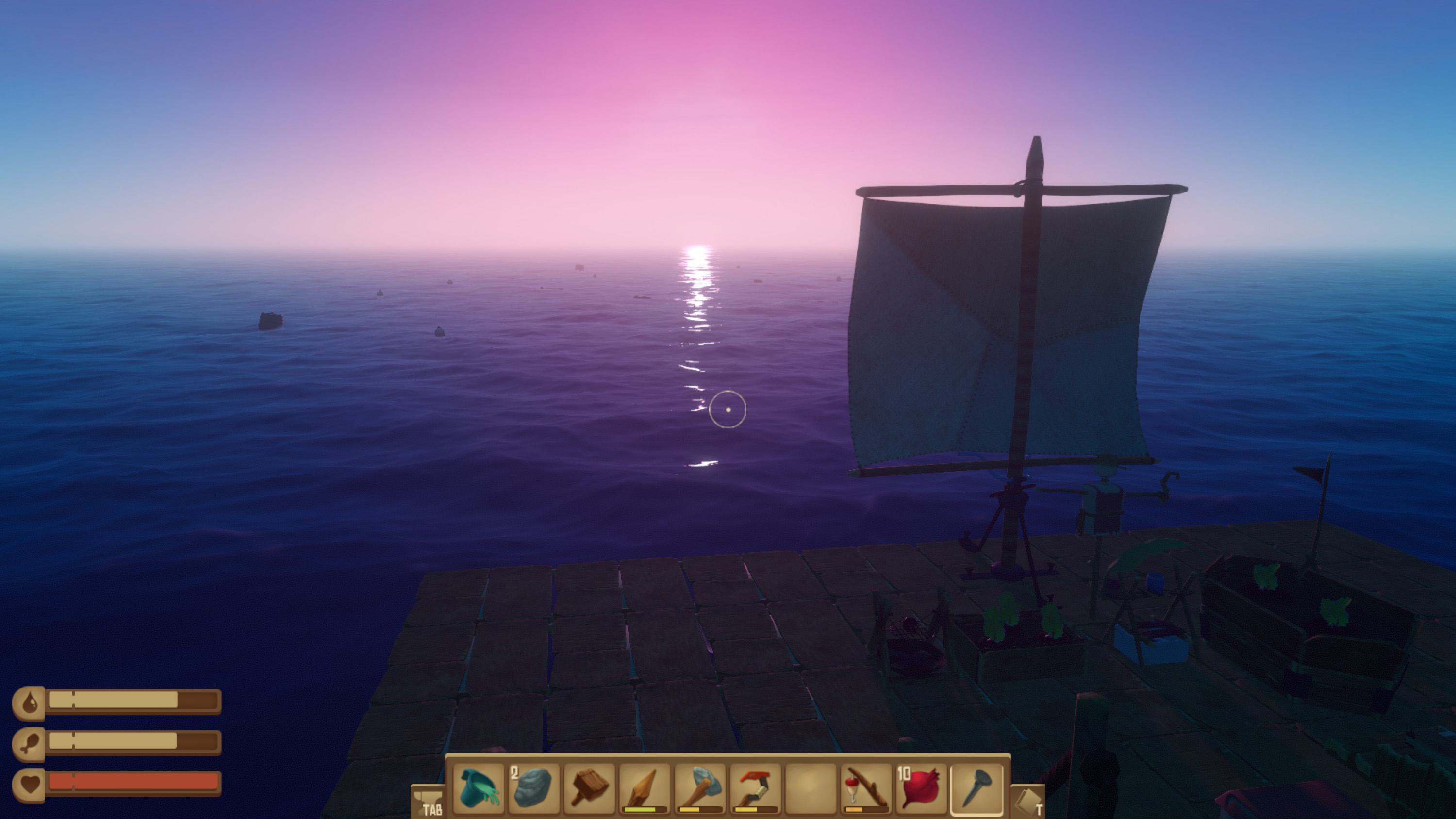 That could easily have been the entire point of Raft, keeping your little Robinson Crusoe avatar alive by extracting as many calories from the sea as humanly possible, but thankfully it’s not. Your biological needs are very manageable, leaving you free to pursue the far more interesting task of pillaging the waves for the resources needed to expand your raft, adding rooms and walls and tables and stairs, hammocks and crop pots and steering wheels and scarecrows to frighten off the seed-munching seagulls. At its outset the game is a straightforward arcade claw machine, right up until you research collection nets which automatically trawl the waves around your raft for all the garbage you need to keep building. As a self-confessed addict of games that gradually begin to play themselves, leaving both of your hands free to eat bagels and drink gin as you gawp at the screen for hours in a joyless stupor, I’m a big fan of the collection nets.

Once freed of the job of fishing endless crap out of the brine, you’ll find plenty else to be getting on with. On the horizon you’ll occasionally spot islands or derelict rafts. Once you’ve researched and built a sail you can more easily guide your growing wooden house towards these landmarks, dropping anchor and jumping off ship to pilfer anything useful you come across. It’s in the shallow waters surrounding islands that you find the rare metals and clays required to transition to the next stage of the tech tree, where everything kicks into high gear and you start building radio antennas and transmission towers using ropes and coconuts, unlocking the game’s lore and story mode as you do. 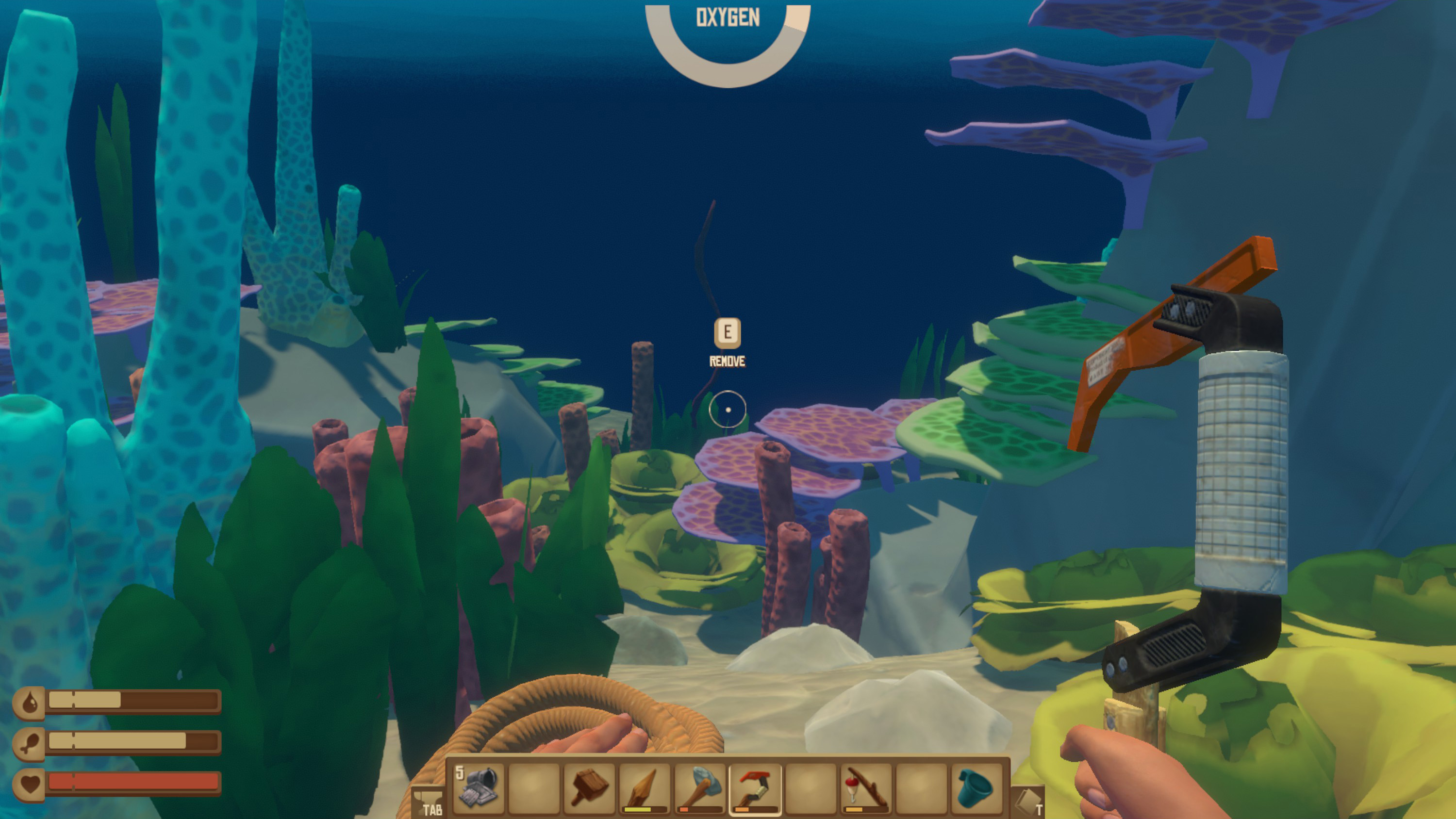 This is a more guided survival game than most. Raft not only has a literal story to uncover, revealing the reasons why the world got so wet, but it cleverly chaperones you from one discovery to the next, unfurling a quickly expanding list of researchable equipment and tools while staying focused enough to keep you from feeling utterly bewildered. Recent updates have introduced super large and sprawling islands with buildings to explore, animals to tame and bees to capture. You can stick engines and rudders to your raft and sail it any which way you want, no longer a slave to capricious winds, using radio equipment to discover and revisit any islands you’ve come across. Raft’s endless oceans feel entirely empty at first, but beyond those horizons hide great piles of stuff.

The motivation to keep moving forwards is maintained by the constant threat of a shark attack. There’s a bastard shark who follows your raft around incessantly, chewing you up if you spend too long in the water, and occasionally biting entire pieces off your boat if you don’t give her a warning jab of a spear every now and then. The shark is a marvellous example of clever game design, a persistent enemy that makes in-world sense, and whose inescapable presence engenders a mild sense of danger and urgency, without which the game would feel listless. The islands and ships silhouetted on the horizon are the pull force, the shark is the push. She is your Wilson. Your Moby Dick. The only living creature besides seabirds you’ll see for the first half of the game. I think I would like a shark to follow me around in real life, making sure I arrive places on time, and quietly threatening to gouge my torso with row upon row of sharp teeth if I forget to phone my mother. 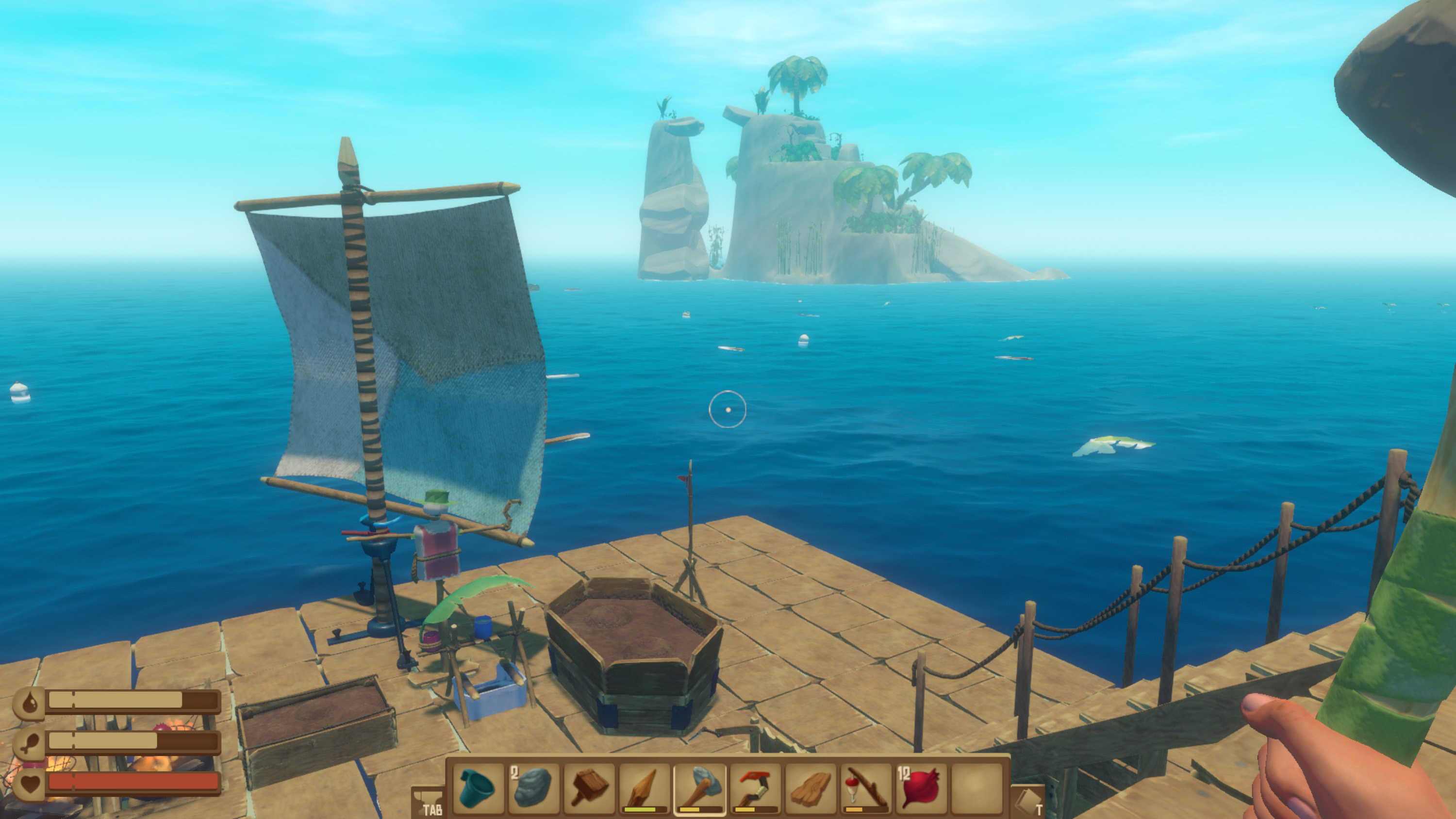 You can invite friends aboard your raft for some multiplayer sailing, which is a real selling point of this game, though I always prefer to go it alone in these kinds of survival sims. The idea of sharing my raft, and risking some idiot placing a wall somewhere I don’t like, is horrifying to me. Raft doesn’t punish the solo castaway, though you’ll progress more slowly if you refuse to open your world up to other players, simply by having more work to do by your lonesome.

Besides, placing a bunch of people on a raft has historically resulted in exceptionally strange results that have very little to do with finding new islands. In the 1970s a bizarre social experiment was carried out in which ten strangers attempted to sail across the Atlantic on a small raft, the purported aim to study the psychological effects of sharing a confined space for a long period of time. Predictably enough, the subjects of the study formed a kind of awesome hippie sex cult and mutinied against the researcher. The raft became known in the tabloid press as the Sex Raft, inventively, and is the subject of an incredible 2018 documentary called The Raft.