Hello. This is Spawn Point, a new not-quite-regular feature in which we take a genre, series or other facet of gaming culture, and try to convince you to give it a shot. It might be those hero shooters you’ve always wanted to get into, or that terrifying space game played by thousands of jerks. We’ll briefly explain the thing, followed by some ways for you to breach it.

First up, it’s... the real-time strategy.

I know what it is TELL ME HOW TO LIKE IT. All right, jeez. The most important thing to know is that you aren’t just stuck with Starcraft II or Supreme Commander. There are RTS’ about martian businessmen, digital stickmen, and cuddly Vikings.

I know, I’m just disembodied bold font. Ha ha. Anyway, Northgard is a full-on RTS in many ways, there’s lots of land-grabbing and securing resources to grow your war machine and economy. 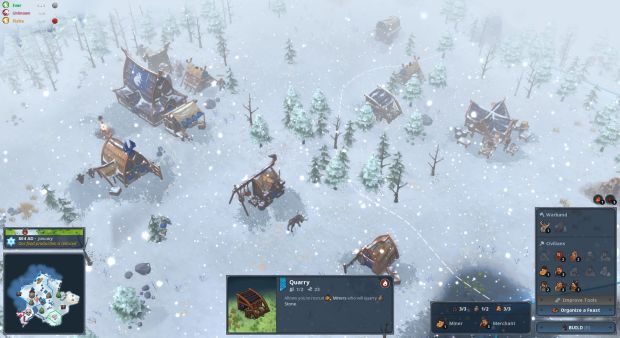 Yuck. But it’s also one of the most easy-going and newcomer-friendly strategy games around, without sacrificing the core of the RTS. There’s a lot of town-building elements to it. You can only attack territories adjacent to ones you already own, giving you plenty of time to make a home. And battles aren’t overwhelming disasters of blood but small skirmishes between a handful of raiders.

So there's still a fair bit of murder? Yes, but when the killing is done you can bring warriors back and turn them into fishermen for their retirement. And if you don’t like subjugating others by force, you can win a match just by being more prestigious than your foe, sallying forth to defeat big mythical beasts or holding sacred territory.

But what if it’s still too stressful? In that case, there’s always the lightweight option of Ultimate Epic Battle Simulator, which is more like a sandbox for silly fights. You can make a Jedi army fight penguins in that game, with no consequences. Or, if you like a simple interface but still want a little peril, you might like DEFCON. 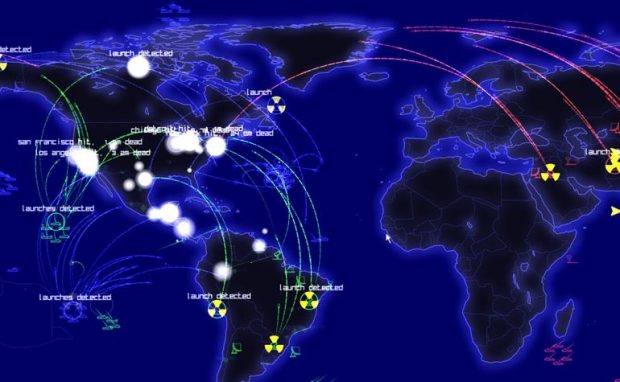 Right. Isn’t there anything with, like, fluffy woodland creatures? Yes, it’s called Tooth and Tail.

WHAT. It’s about the rats and squirrels of the proletariat overthrowing their “civilised” masters so they can eat some clever pigs.

I’m listening. It’s a little different. Instead of being an all-seeing mouse cursor, you control a single rat who rallies gangs of troops around the map. You have to lead the charge and build everything yourself. It’s far more straightforward than the 300 actions per minute of Starcraft. And if things get tough, you can burrow back to your HQ.

That sounds way better than being a Viking. Maybe so, but it does have some drawbacks. There aren’t a huge amount of players online, if you’re looking to fight others. And the single-player campaign has a few bizarre difficulty spikes.

Another revolution cut down in its infancy. I’m sorry, comrade.

Okay, let’s say I’ve mastered all these but I want more. I want a REAL RTS. Well then! There’s the whole Total War series, where you command geometrically pleasing legions of troops on a battle map but then also have to order them around on a bigger world map. Or the recent Offworld Trading Company, which is about being a capitalist on Mars and running your business more ruthlessly and efficiently than your competitors.

You know how I feel about capitalists. Oh right. If you ask me though, Company of Heroes, an RTS set in World War II, is still one of the best ever made. 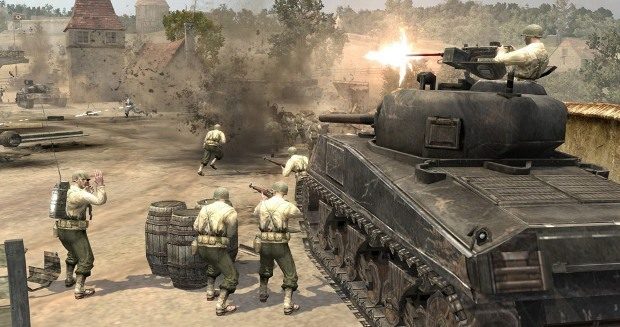 Why? Because you can lay out mines, barbed wire and machine guns and slowly turn the map into a defensive mess. Certain missions in the campaign hit harder than a sack cloth full of bricks, so be warned. But it’s a solid place to go if you don’t want to go all the way back to the old Command & Conquer games or Age of Empires II - both very well-respected among fans of the genre.

Tell me more of these Commandants & Conquerers. As games, they’re older than a wrinkly granny, but they did lay the foundation for much of the genre. And they include some of the best b-movie performances in videogames, like Tim Curry holding back the laughter as a space communist.

Space communism!? WHERE CAN I GET THIS. You can download the first Command & Conquer: Red Alert for free here.