Spider! Ah! Oh thank heavens it’s just an early access videogame. Easy mistake. The way they both scuttle out into the open, it’s very similar. But see, look closely and you’ll find that this is actually a lesser-spotted Hunt: Showdown - a multiplayer horror shooter set in the swamps and farmland of rural Louisiana, in which pairs of bounty hunters track monsters and shoot at each other. Not at all a slavering, monstrous eight-legged terror from the deepest chasms of the primordial human psyche. In fact, look at it from the side and you can see a launch trailer. That means it’s a male. The males are harmless.

That’s the schtick. You go into the swamps – five teams of two people – and hunt a big monster. Maybe you're after the bloated, leech-haired “Meathead” or something called “The Hive” or maybe just – AH! - a giant spider. If you successfully kill your quarry, other hunter teams will be able to see you using their wobbly hunter vision. And they want the trophy from your poor monster victim. So it’s part Left 4 Dead, part every other competitive multiplayer shooter. I’m simplifying things because that’s my job.

As in the battle royales of the world, death means death. Here, you lose all your gear but you’ll keep experience which you can use to buy more gear and upgrade your next hunter character. There are lots of dirty, old-fashioned monster-hunting weapons, such as this one, the Caldwell Handcannon. 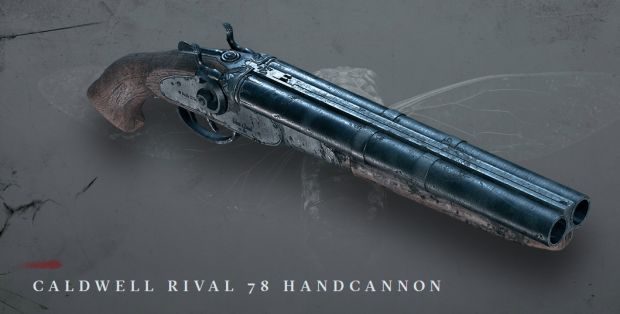 Adam had a go at Hunt: Showdown before release and spoke of it on our podcast about the best monsters in games. He was a bit disappointed that the monster-hunting had to devolve into human-hunting but he's been playing a little more and will have some thoughts soon. Maybe getting shot in the back from an unknown position by an unknown assailant with an unknown weapon will grow on him. He enjoys Plunkbat, after all.

Anyway, as you can see the game has scurried out into the Steam store for £25.99/$29.99. It’s an adorable creature when you examine it, and… wait, now that I think about it, it’s mating season. This little Hunt: Showdown must be looking for a mate. See? He’s flashing his trailer and exuding review code and -- wait. But that means… Oh no.