This is the last entry in my diary of playing The Longing, a "sad tamagotchi" game that can take over a year to play. As it turns out, however, it only took me a few months. The first entry in the diary series is here, and you can read all of it here. It has been... emotional.

You join us as Burnsy, which is what we've named the Shade creature we are caretaking, is trying to explore the very upper areas of the cave. My ultimate goal is for them to escape, leaving the caves and their slumbering master, the King, far behind. I think that it is, secretly, what Burnsy wants to do, even though it conflicts with their feeling of duty. But they are such a poetic soul, and they dream so much of the surface. I want them to achieve their dream.

I was a bit freaked out by the giant cliff Burnsy had encountered previously, so I'd left it a few days before going back to play The Longing again. Unfortunately, this means that now, I have even less time in which to help our little Shade make their escape. But Burnsy seems as implacable as ever. And while I'd rather not send them back into the dark, that's the only place left to explore. So Burnsy must be brave - and, if I'm honest, I must be brave. I'm not so much scared for myself, though, as I am scared of what might happen to the little soot creature in my guardianship.

In a move that made me very proud of myself, I did remember that pink mushrooms are little torches. So Burnsy picked one of those to hold, and the tunnel wasn't so dark as a result. 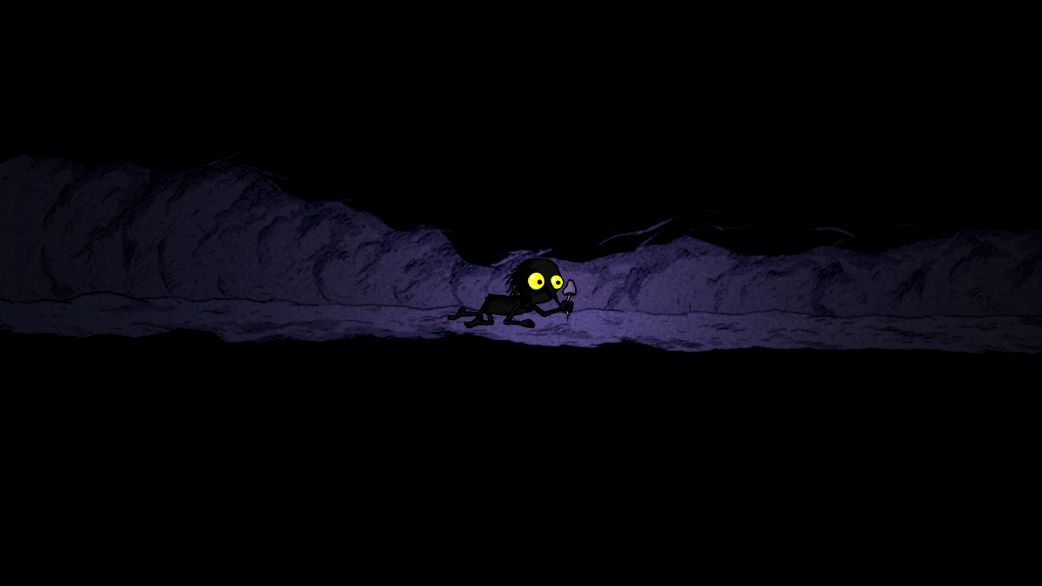 This turned out to be a blessing and a curse. The walls of the tunnel seemed to form faces with their cracks and crags, and there was a strong vibe that Burnsy wasn't supposed to be there. But I did also find a secret staircase, near the cliff. And on the reasonable assumption that anything going upwards would take Burnsy closer to the surface, up the staircase Burnsy went.

The staircase went into an even darker tunnel. The darkness here consumed even the light of the mushroom, so only Burnsy's eyes were visible.

This is why I got properly shitted up when a pair of identical eyes appeared ahead. It was fucking terrifying. When Burnsy got close to them, something said 'I CAN SEE YOU', and the eyes moved forwards. Then Burnsy blacked out, and woke up back in their home. 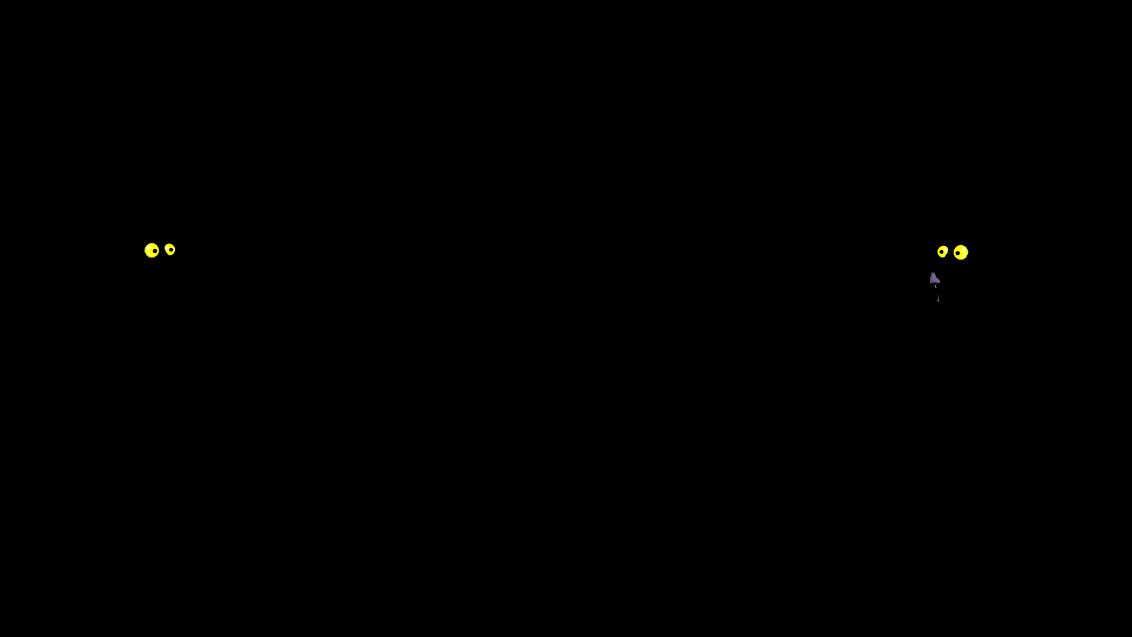 This game is too much, lads. 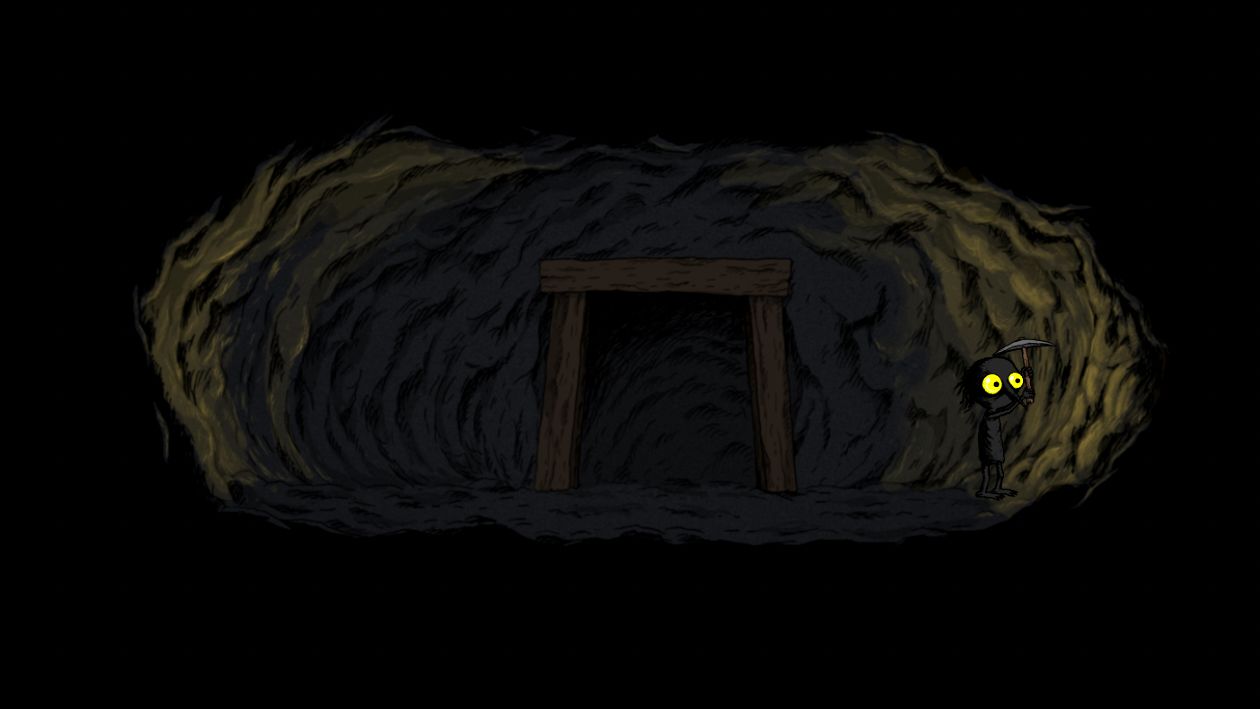 Still in a "fuck that noise" headspace, but determined to escape anyway, Burnsy tried again to get past the creepy eyes, but failed (twice!). Eventually we went back, dejected, to the deeper tunnels, to stomp about with the attitude of a moody 50s greaser kicking an empty tin can down a street. Stumped again!

After that, Burnsy spent the day visiting other areas of the kingdom that I'd been stuck on before. This did yield some surprising results! Burnsy managed, with some patience, to crash through the ceiling of the mine, and found a new mattock there. They also mined a lot of coal, and some sulfur. The sulfur, indeed, turned out to be our long lost yellow pigment! 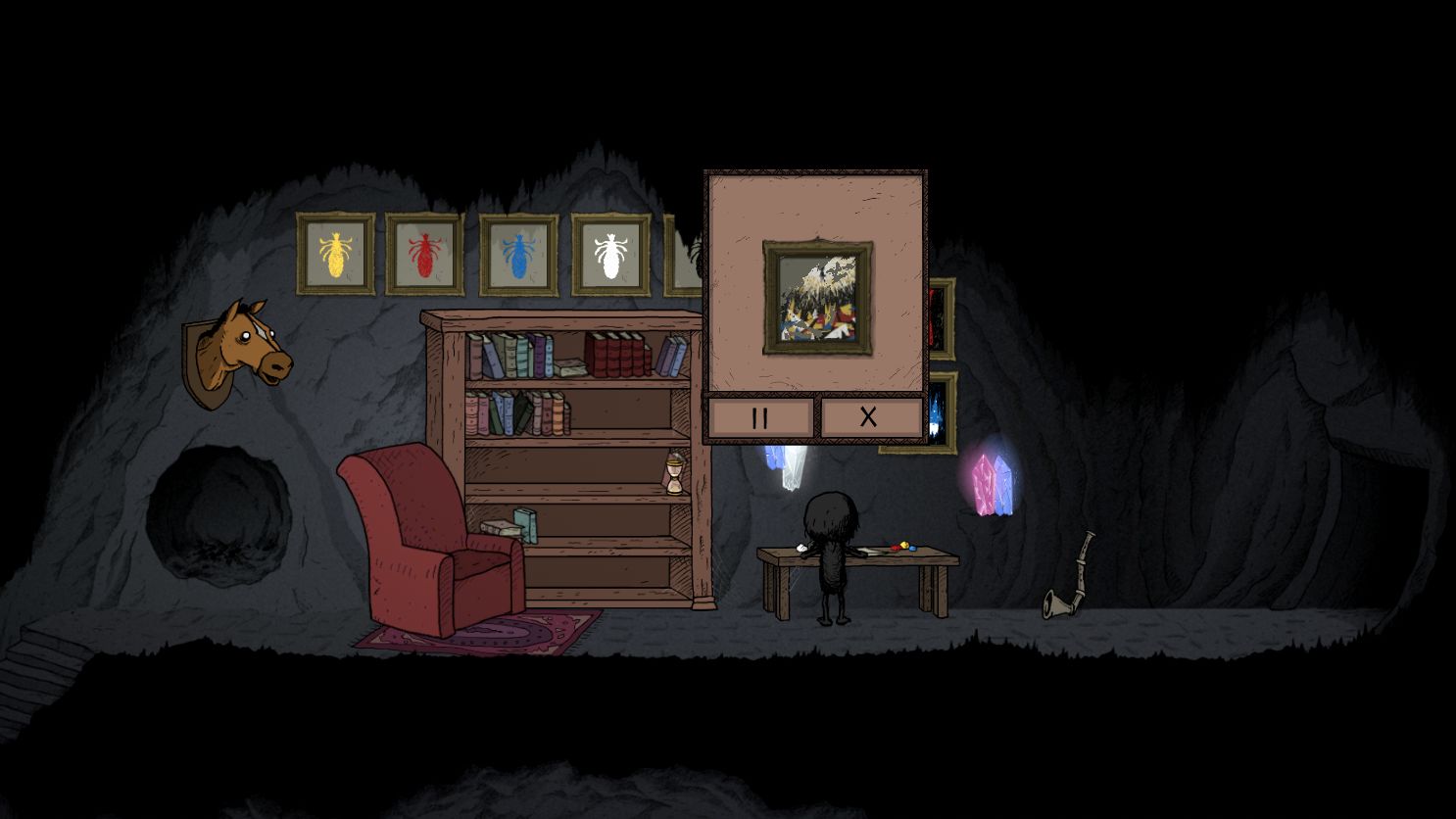 So Burnsy immediately ran home and drew a yellow louse (completing their collection of lice pictures), as well as a picture of escape. The additions made Burnsy's home comfortable enough that time began passing 10 times faster in there than in the real world. These achievements were very heartening, but didn't technically get us any closer to escape.

One other notable happenstance was that Burnsy had a conversation with themself, whilst sitting in the mushroom garden in their home. They decided that to get through the darkness, they would have to become it. So we will have to try again, I think.

Today Burnsy became the darkness. Quite literally, I think. But I think a more optimistic way to look at it would be to say that Burnsy came through the darkest experience of their life unscathed, and that while the experience is part of them now, they are still Burnsy. Ah yes - an apt metaphor, eh?

Burnsy walked for a very long time in total darkness. After a while, I started to wonder if they were still actually moving, in all honesty. But eventually: light.

In the upper reaches of the caves we found a secret tower which clearly belonged to a fucking maniac. Although it poked out past the surface, it didn't have any doors or windows through which to actually get out. There were cages holding bird skeletons, a giant crystal (which we stole, obviously), and some kind of extremely suspicious meat grinder on the top floor. Burnsy left quite quickly. 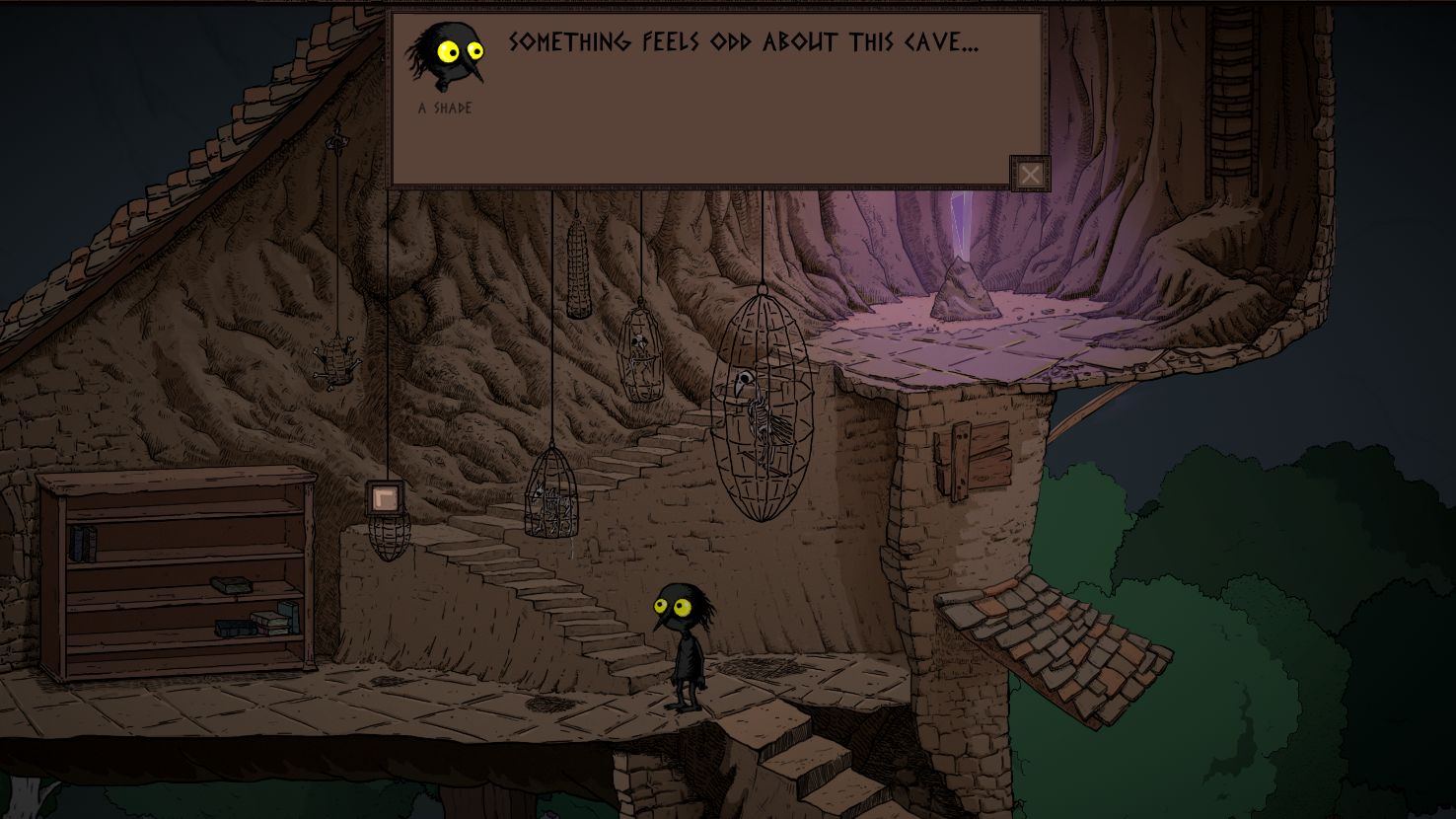 The tunnels close to the surface made their way through sandy earth instead of rock. Burnsy found a set of steps in them that lead to an opening, but it was blocked up by boulders. Who made the steps? Who blocked up the entrance? We may never know. But Burnsy also found the well. And the further they got from the King, the less royalist Burnsy seemed to become. I think I know what we have to do.

Like a tenant who knows they're not getting their deposit back, Burnsy prepared to leave. They found the last bits of wood they needed to make a bed, so spent their last comfortable night at home sleeping on a comfy, mossy pillow. The next day, they got up, smashed all their mattocks against the treasury glass (it did not break, but it cracked irreparably), and set off towards the surface.

There is about a week left for Burnsy to make their escape, and they will spend it sitting and watching, waiting for someone to use the well.

In the dream Burnsy had back in the second instalment of this diary, a child was scared of a spider jumping out of this well. And the weird face in the rock told him to wait for 'old eyes'. So the instruction is pretty clear: if Burnsy gets in the water bucket when the young boy/imp/thing is using the well, he won't escape. This is why Burnsy must sit and wait and watch, and make sure it's the old man coming to the well.

But the waiting is very saddening. Burnsy is sleeping on the floor in a tunnel, away from their books and their art. I have been checking on them every hour or so, but I don't know when the old man might arrive to use the well. I think they only come during the day, but the clock has ended up now ticking down in such a way that the sun comes up at about 5pm, and I can't stay up all night watching. I consider sending Burnsy back to their home, to try and change the time cycle a bit - but no. We left. We won't go back unless we have to.

Burnsy keeps saying that they're lonely. I feel a terrible kind of inevitability: that I will miss my chance, and Burnsy will have to stay in the caves with the King.

The past couple of days I'd seen the boy coming to get water three times. I had gotten to the point that I was making Burnsy stand up again every time they sat down, in case the standing up animation lost precious seconds and stopped them getting to the well in time, should the moment arrive.

Then, at about quarter to 5, I heard footsteps approaching, and they sounded different. They were a bit slower, a bit more of a shuffle. My heart genuinely leapt into my mouth. It was him! It was him! 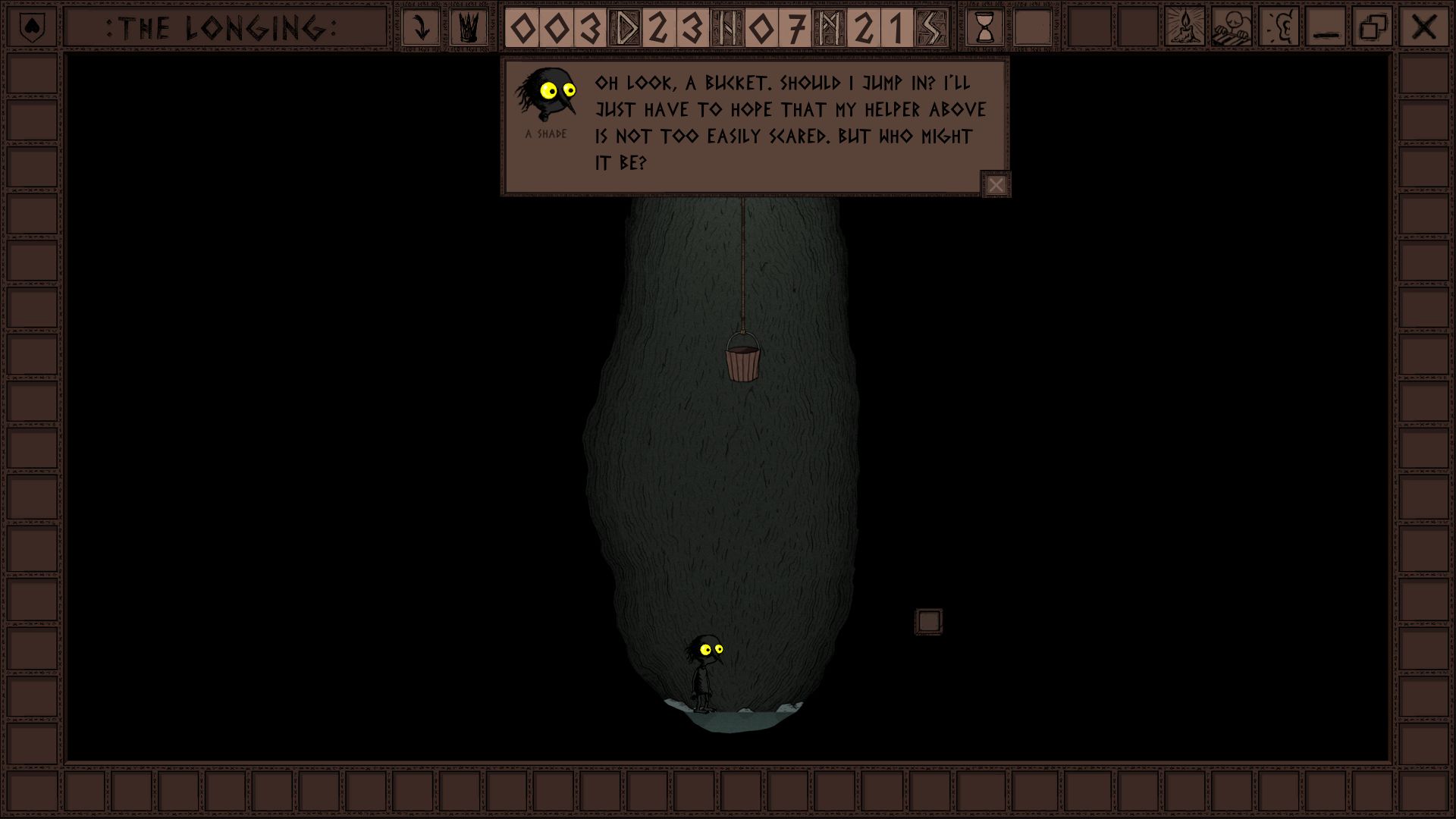 I was so afraid that I would miss the command to get Burnsy to jump into the bucket but… we did it! 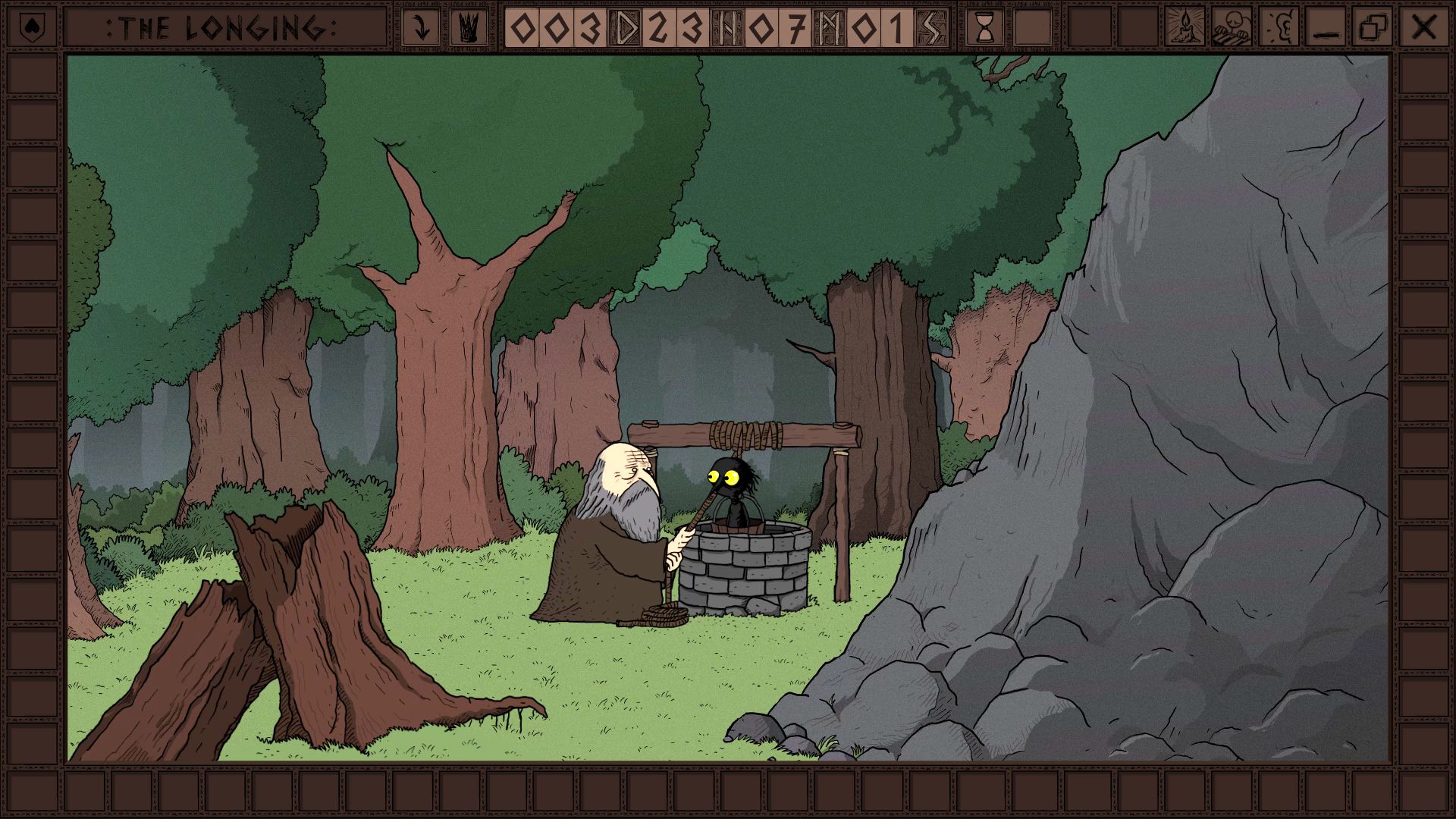 The old man seemed distinctly unruffled. I'm pretty sure he didn't even see Burnsy at all.

Burnsy went for a walk. They looked at new things, and enjoyed the feeling of grass against their feet. They were given a bath (turns out they aren't made entirely of coal!) and a tiny new suit. 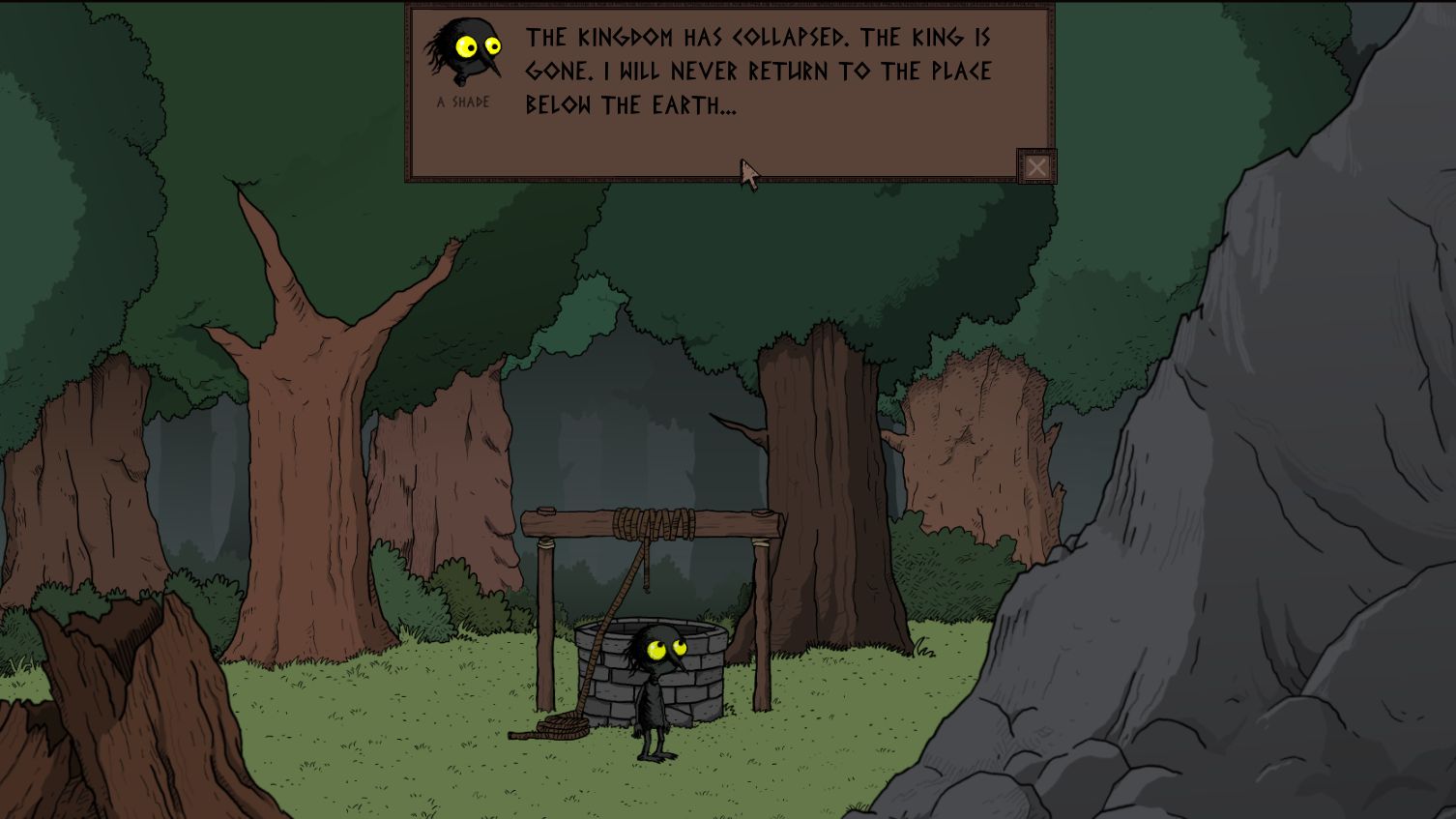 And they will be happy. The King is dead. Long die the King. The end. 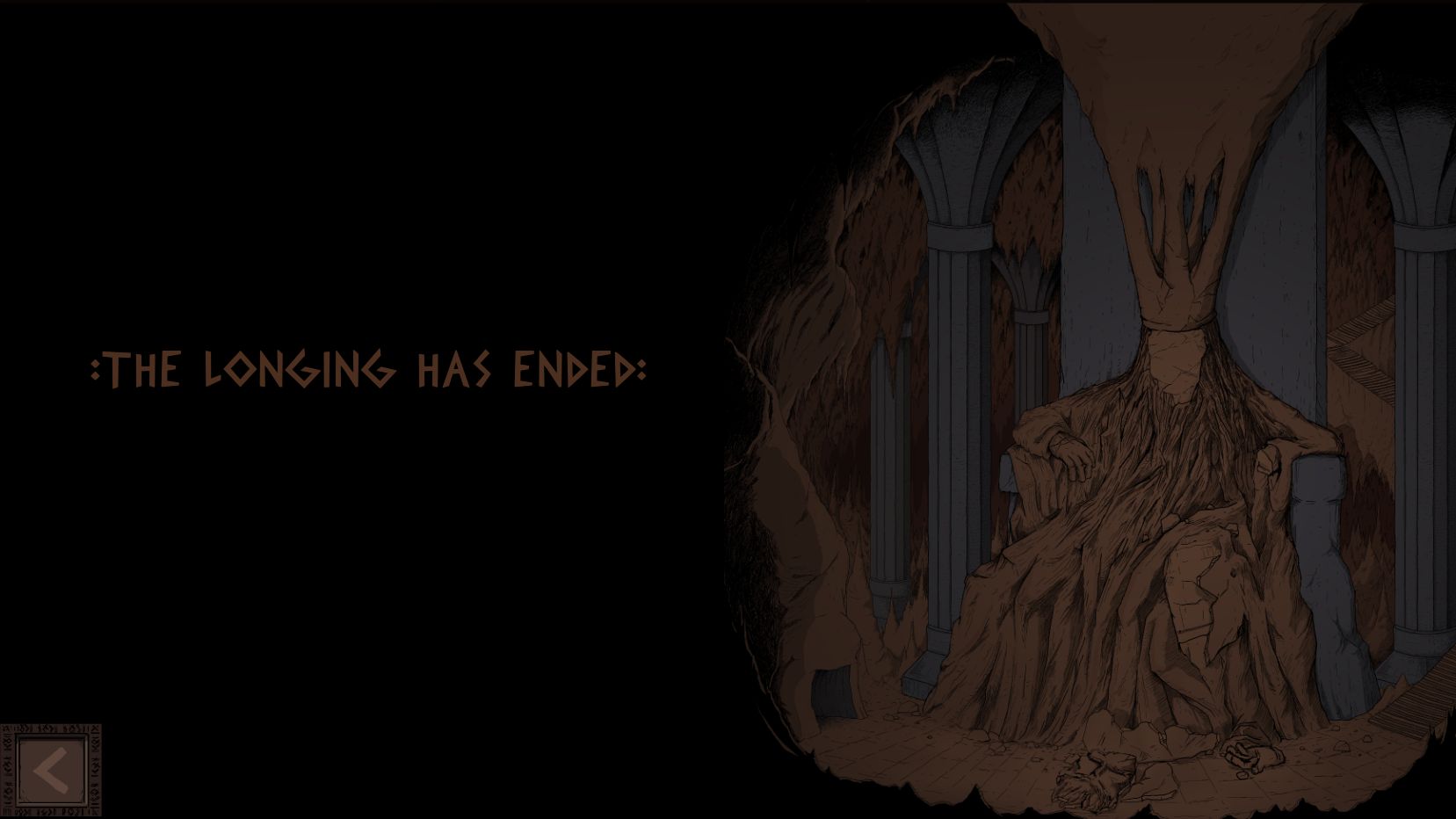 I can't adequately describe the relief I felt when Burnsy made their escape. I don't know what I would have done if they hadn't - if they'd been left in the dark. What a catastrophic failure that would have been. But they did escape, so everything is okay.

In other games, even in RPGs, when sad things happen or characters die, there's often a feeling of detachment from responsibility. The events feel much more beyond my control. But in The Longing, Burnsy was in my care, and whatever happened to them was very much my fault. It's a very clever game because I think it knows that, and it uses it.

It's very clever in how it uses sound, as well. When time doesn't matter, you have to pay attention to other things. In the dark there isn't a speed of light (if I may turn a scientific principle into a metaphor that doesn't quite scan), but there are lots of little sounds in the underground kingdom that you learn to listen out for.

I'm not going to play The Longing again. For one thing, the game itself says it's only supposed to be played once, and now The Longing has ended. But I think it's a great game. It's very obviously not for everyone. But I think, probably, that The Longing has made me care more than any other game I can remember playing. Maybe that makes it a good game to play under current circumstances, and maybe it doesn't. 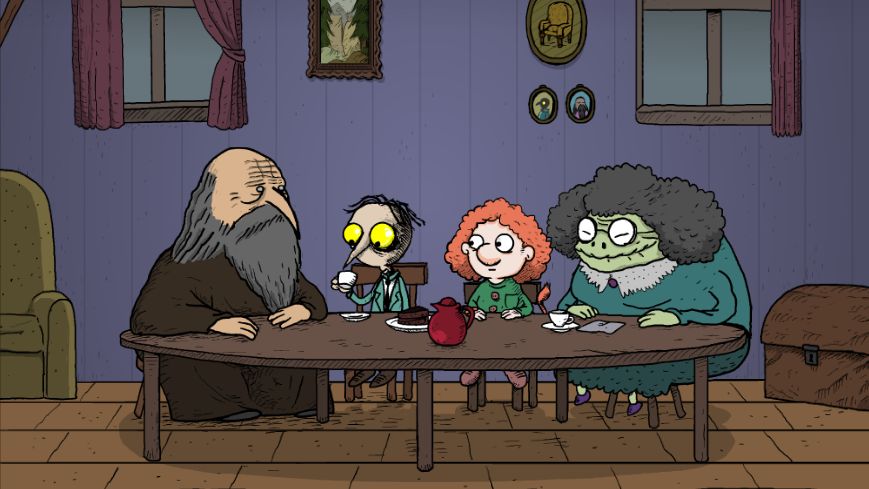