The Longing is a game that takes 400 days to play. You control A Shade, a little servant to an underground king who's taking a very long nap, and in those 400 days you can... well, you can lots of things. Explore the caves. Build a nice home. Sit and wait.

But I have been playing The Longing for about three months now, and my goal has been, and remains... to escape! I want to give our Shade, who we have named Burnsy, a better life on the surface. This has proven more difficult than I first imagined. But we are still working on our list of other goals, too. This latest chapter in Burnsy's life gets a bit grim, though. Or at least, I get a bit grim.


(We've not been doing too badly at the to-do list so far, although my concern is that a lot of the items left on it are difficult to achieve - or at least, that I have no idea how to achieve them.)

I returned from my most recent trip (which was to see Baldur's Gate 3, btw). Burnsy went back to the impassable cliff near the mushrooms again, and planted a green mushroom to see if it would grow massive like the one wot got splatted.

Oh dear, I did it again. I had to go on another trip. When I fired up The Longing again today, Burnsy was sitting happily in their armchair still. I think they know that I haven't neglected them on purpose. Today we only had time to practise playing the weird flute trumpet for a while. Burnsy is making progress at that, honking away in their cave hovel like an asthmatic goose.

Burnsy went back to the mushroom puzzle cliff today. I was well excited, expecting a big green mushroom to be there, like something out of Charlie And The Chocolate Factory. A big, grossly enlarged thing that Burnsy could trampoline around on.

The mushrooms everywhere in the upper caves are making me think of that weird meme about mushrooms from Tumblr: "you cannot kill me in a way that matters". Mushrooms are incredibly strange. But it's true! Whenever Burnsy picks up a mushroom they can just replant it somewhere else. Even if they eat the mushroom, one will regrow in the same spot, in the fullness of time. Me and my older brother both hate the taste of mushrooms. He says they "taste of the grave." 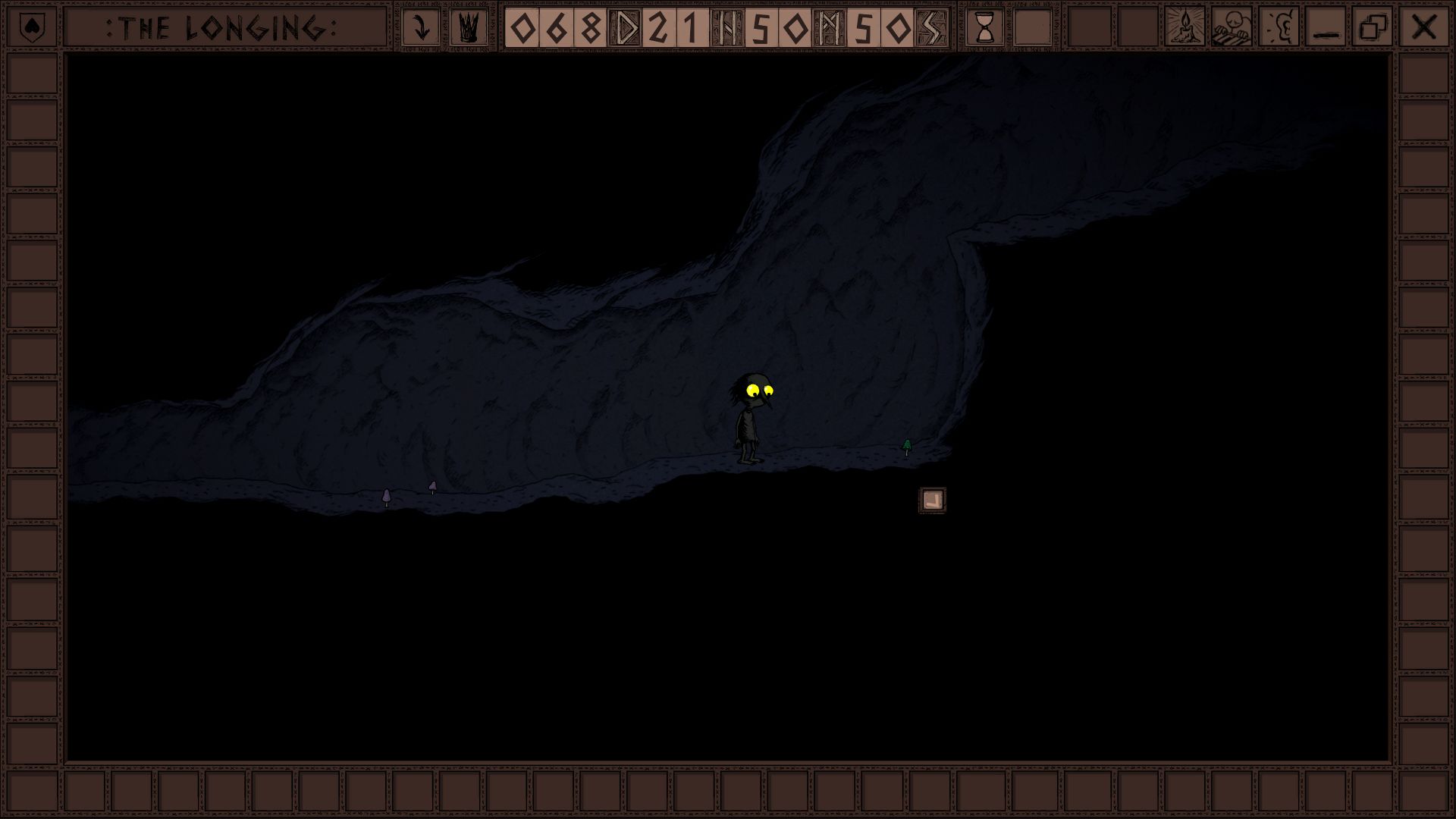 Anyway, Burnsy's arrival revealed no large mushroom. There was a regular sized one, but the cliff was still impassible. The blow when I saw this empty space, the absence of mushroom where I was convinced a giant mushroom would be, was genuinely crushing.

I have absolutely failed Burnsy, because I have no idea what to do next, and there are only 68 game days left! This poor lonely Shade, living at the feet of its weird master! And when I look at the rest of the list of ways to improve his life, it is a litany of failure as well. No bed, no idea how to get wood to build it, no yellow colour for art, not enough books still. No running water. No way into the mines.

There was genuinely a moment just then when I bowled through the urge to cry.

How strange that small things can take on such monumental importance. How outwardly counterproductive, our trait of making unreal things very real in our heads. Burnsy is just a little collection of pixels and code. They don't exist or have feelings. Except I have been told they do, so it is so! They like their armchair and they love books, and they don't like being disappointed. They're like me!. And I suspect caring about fictional things that you can't touch helps you have empathy for real life things and people, doesn't it?

So I, er, cheated, and looked up how to solve the mushroom puzzle on Steam. There is a sizeable community there who have already found everything there is to find in The Longing, and who have perfected speeding up time until it's a fine art. Hopefully by tomorrow there'll be something at the impassable cliff, because it's a very long way from Burnsy's hole in the ground.

On the way back home, Burnsy chipped off a new white crystal to use for decorating their home. That one decoration has now made time pass six times faster than usual in Burnsy's home, which means by tomorrow I'll have lost another week of the time left in which to escape. I have briefly considered leaving Burnsy out in a cold hallway in the past, in order to slow time back down, and it's more tempting than ever now. 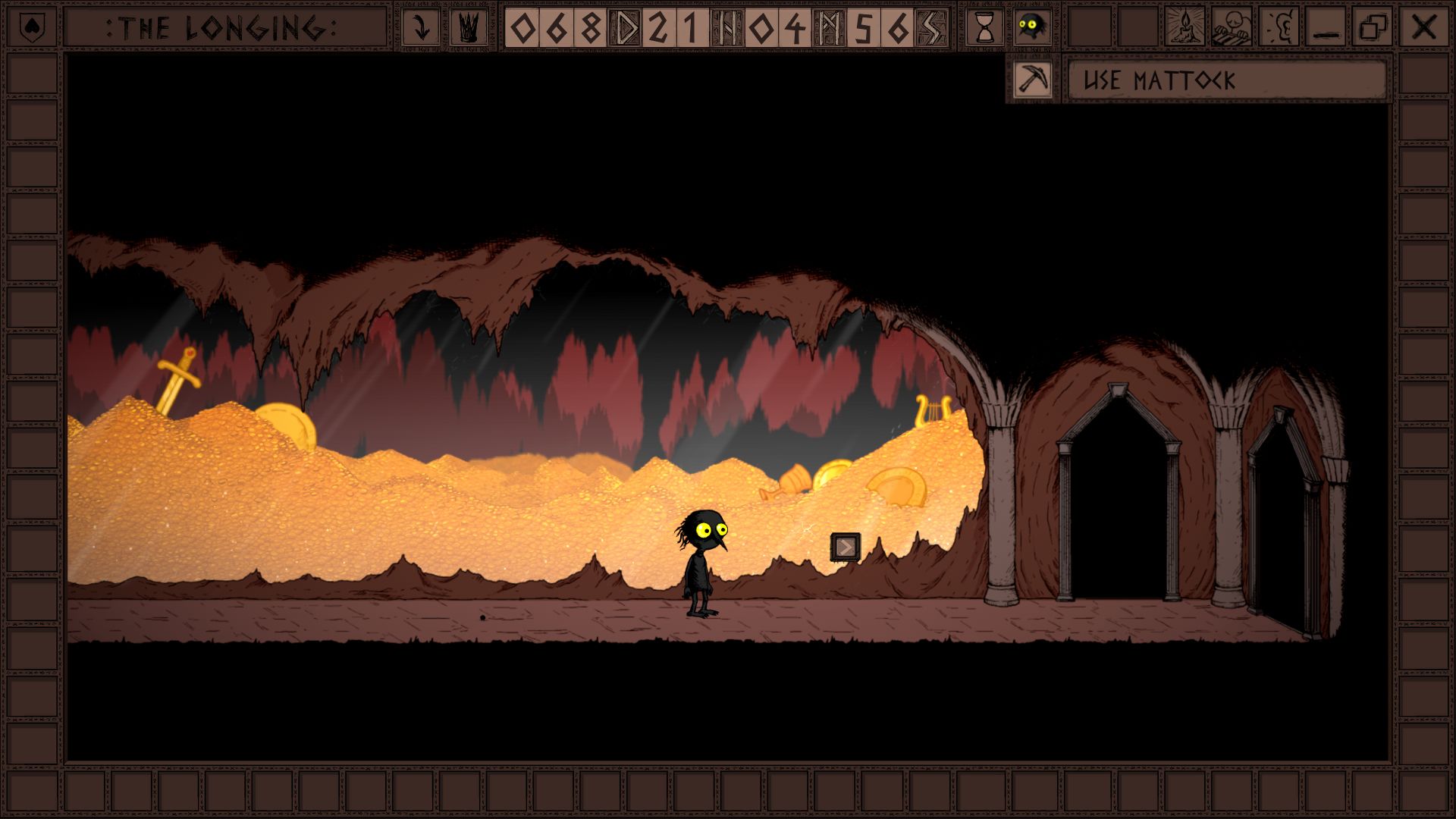 Passing the glass-walled treasure room, I made Burnsy have a whack at it with the mattock, despite the fact they previously said this was very definitely a bad idea. The mattock disintegrated. So now we need a new mattock. But there's a tiiiiiiny crack in the glass now. Progress is so slow, and costs so much!

Burnsy went back to the impassable cliff, and looking up the answer turned out to have worked! And they say cheaters never prosper. There was not just one big green mushy there, but two! 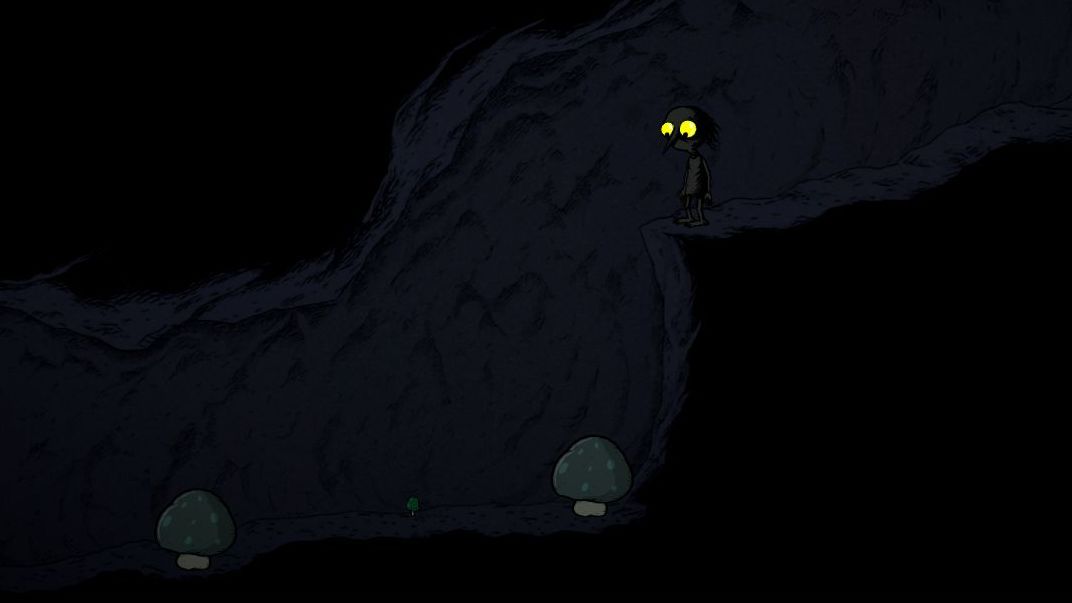 Burnsy climbed up one and found themselves in another tunnel. It got gradually darker and darker. The caves made a nose like breathing.

I imagine those caves are very hot, not like the cold damp everywhere else, because of that noise. Like being in the throat of a wolf. 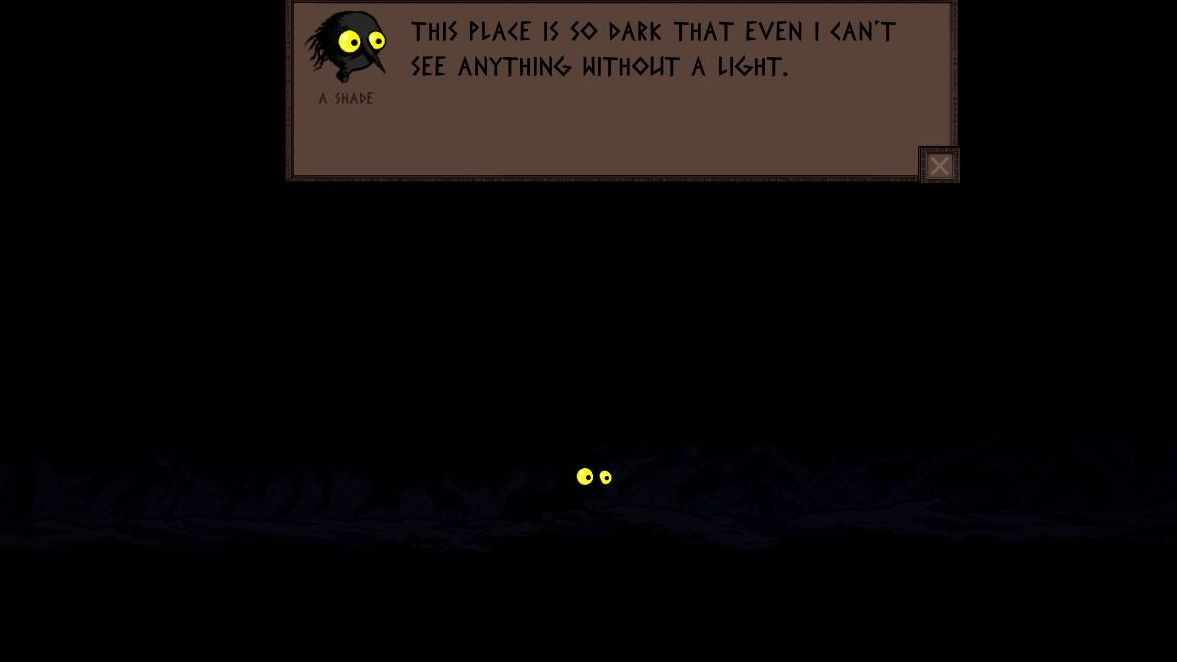 It got darker and darker still, until not even Burnsy could see anything, and they said they wanted to go home. I kept the cursor very close to Burnsy's feet.

Eventually it got a bit lighter again, so we could see the shape of the path in front of us. But Burnsy said they could feel their end approaching. And the camera zoomed out and revealed we were approaching the edge of a very tall cliff. 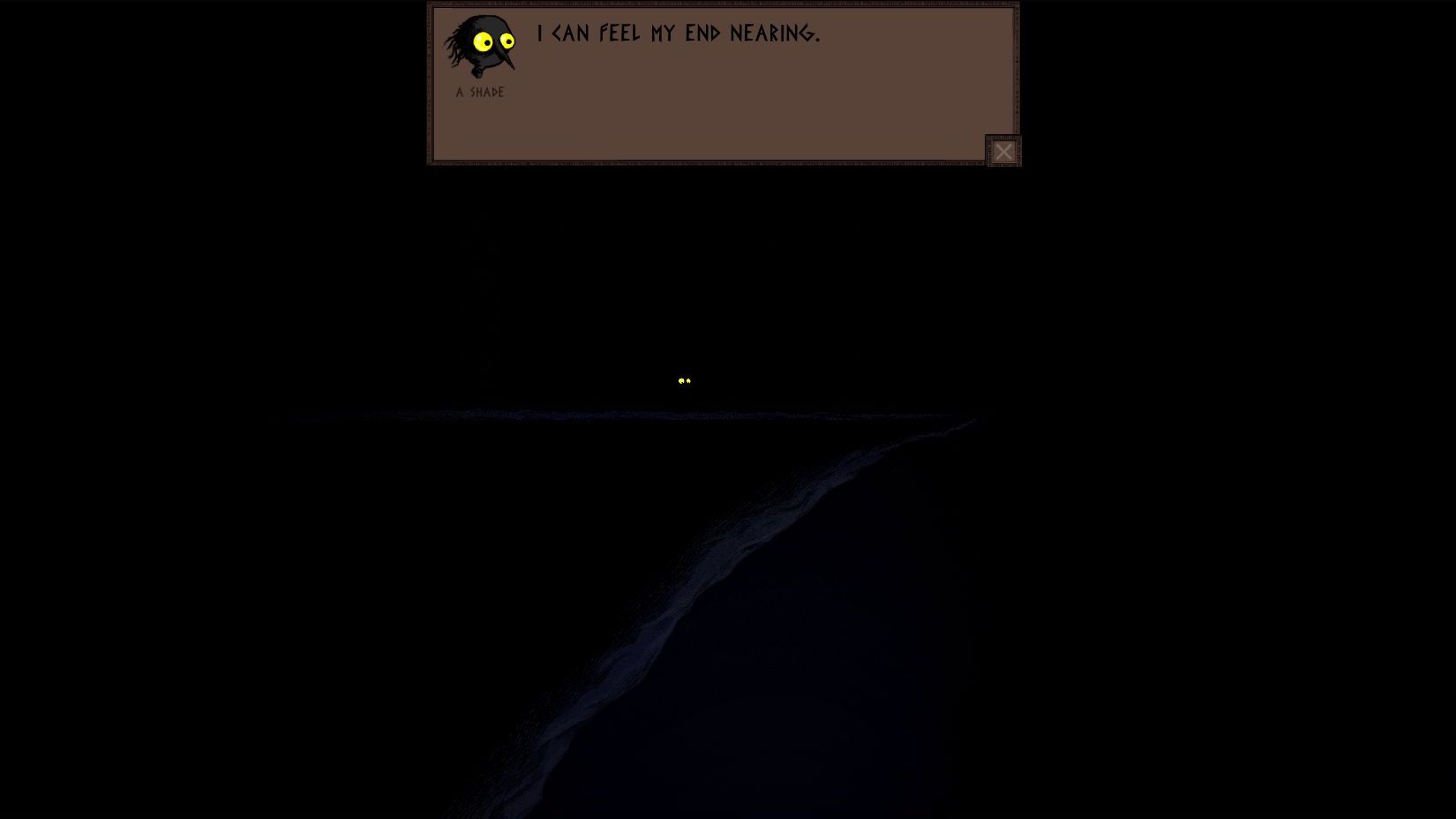 We ran back through the dark, all the way home.