Popularity poses an interesting dilemma for any piece of media, but especially for those that thrive on their secrets. Attention is the held-breath hope of most aspiring indie developers, but a large enough community will excitedly share guides, forum posts and screenshots that illuminate every last hidden corner of a game. That might well be antithetical to the intended player experience, or an artist’s ultimate goal for their work.

Who are the enthusiasts who wade into the secrets of a game on behalf of other players? What are their motivations and expectations? And how do developers feel about the short-work illumination of their years of work? To see how the dynamic between an active community and a game's developers can play out, I decided to speak to the principal creator of this year’s brilliant "sad tamagotchi" game The Longing, as well as the two creators of its most visited guides.

“The ultimate goal of the game is self-reflection and choosing the path that the player deems best out of the ones that exist,” Anselm Pyta, co-founder of Studio Seufz, tells me. The Longing is largely based on a student project of Pyta's, with game design, sound, scripting, art and animation all being handled by the creator as far back as 2014. “It's a personal and experimental game, so I was not expecting ANY success.” 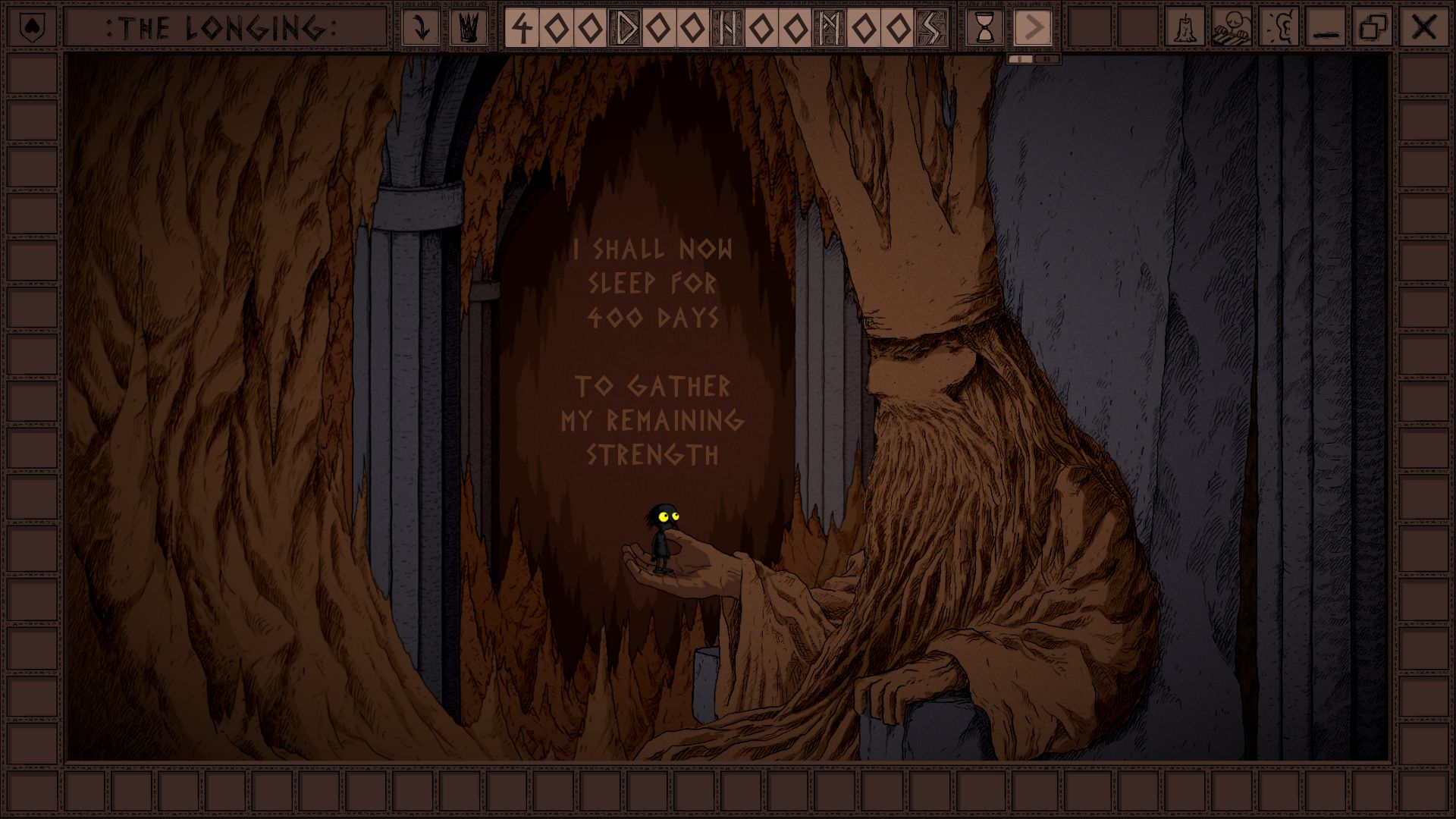 The Longing, on the face of it, seems incompatible with the concept of a community. It’s a searingly lonely game. You guide a ‘lonely Shade’ through the exploration of an underground, labyrinthine cave system as the game counts down what could be 400 real-time days before the subterranean king of that realm reawakens. The goblinesque creature can’t even count on the player for contact. It being a part-idle game, where time continues passing even when you're not playing, your monitor brings but fitful light to The Longing's caves. Yet, with a very active community on Steam, many players choose to bypass the isolation of ambient cave noise, dead-ends and the Shade’s philosophical musings for a more collaborative experience. One of untangling its mysteries together.

The Longing is demanding. It’s filled with secrets, Easter eggs, time-blocked areas that require you to wait days or weeks, and puzzles that rely on cryptic clues. It also boasts one of the slowest walking speeds in all games. It's designed for a single playthrough, too, so things like easily available guide resources and regular communication on forums would surely change how players engage with the experience.

Pyta takes a mostly positive stance on the short work made of The Longing’s mysteries. “Of course it takes away the sensations of exploration and mystery a bit. On the other hand, it's nice for a developer to see that all the stuff you put in is actually seen by people.” Since the act of choosing a path and an ending should be the most significant exercise in the player’s experience, Pyta hopes knowing the specifics of those paths shouldn’t dramatically affect that. 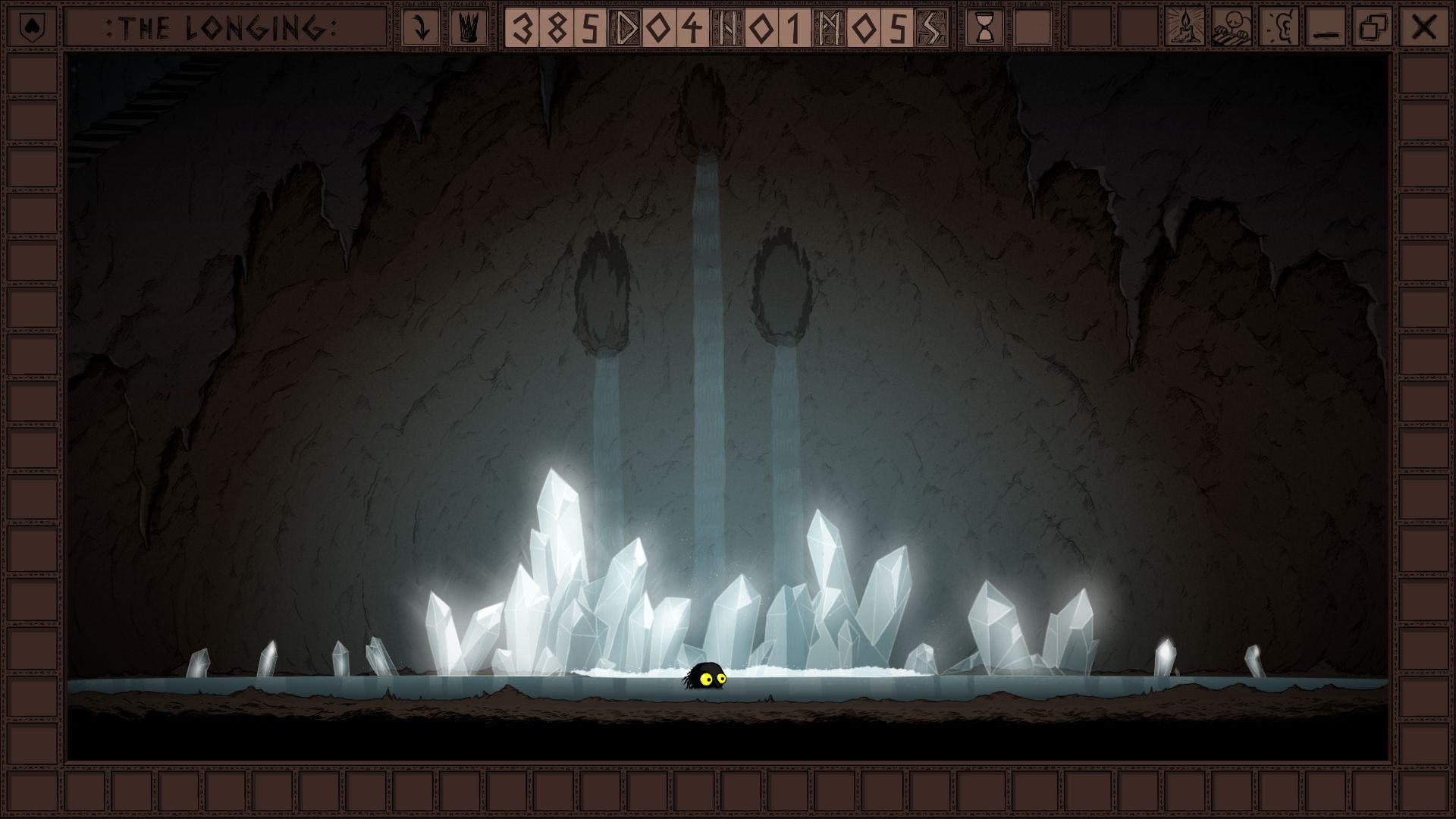 Pyta may be unperturbed in principle by guides and posts, but he was determined during development to make unravelling The Longing a challenge. Assets for special items were reused with different shaders to throw off asset rippers. Even the ultimate defence - using Steam updates to periodically add to the game - was considered. That last is an approach that’s been revisited in spirit with the significant additions in recent updates, which add the ability to weave carpets, and a way to download and upload books from and to the game.. “The effort it takes to shroud something in mystery is big and developers should probably rather focus on the 90% of players who play casually anyways.”

That keeping secrets under wraps is nigh on impossible might actually be the fun of them. A guide is just the endpoint of the best stage of the process with guide writers like Alva Majo and Kane Reynolds often sourcing pieces of information from the community. Though finished guides assure predictability for the end user, the research that goes into them is often fuelled by wild experimentation. There are often in-game warnings telling players that certain actions will be ‘useless’ or ‘foolish.’ “But this seemed to challenge players to try anyways,” Pyta told me.

“This is actually the only guide I’ve made,” admits Majo (who made a golf version of Getting Over It called Golfing Over It With Alva Majo) fame. Majo believes that, compared to Steam forum threads full of incidental spoilers, his carefully constructed guide can help players whilst maintaining the mystery and challenge of the game. His guide’s spoiler-tagged hints escalate only gradually towards explicit solutions. “I decided to make the guide I wish I had had, so that people coming after me could have a better experience with the game.” 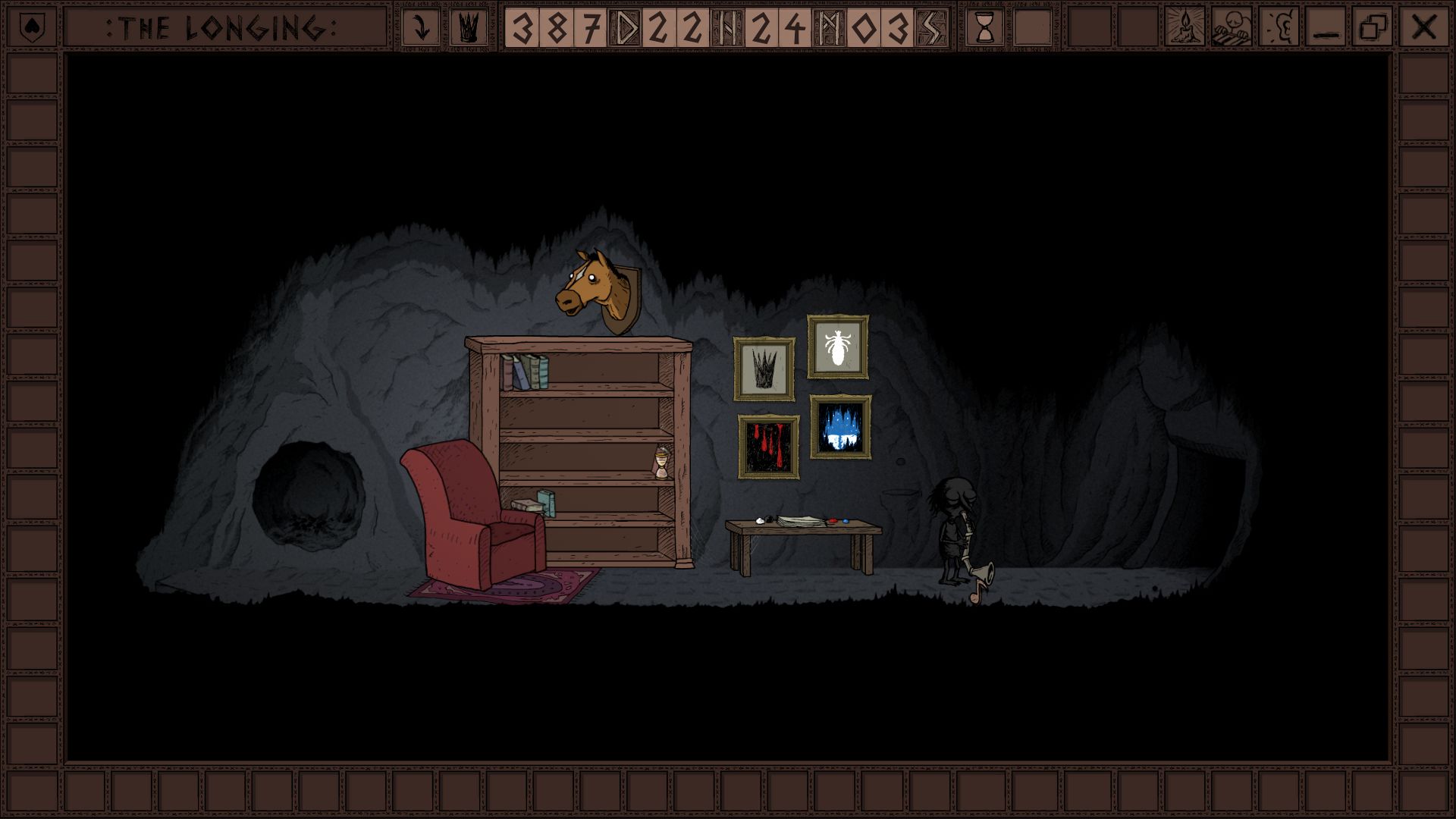 Reynolds is slightly less of a stranger to guide-making, with an eclectic list including everything from Metal Gear Solid V to Dear Esther, but took the opposite tack. “I created my guide for The Longing because I wanted new people to find something useful enough to allow them to jump right in.” With his plain, directive approach, Reynolds admits that the process of creating a guides is itself his main driver. “When I find a game that has a somewhat good following I’ll try to create a guide to help new people along.”

This kind of altruism, à la Wikipedia or any user created guide or review, is of course nothing new, but some of the underlying motivations are surprising. “I think The Longing often demands too much commitment from players, which makes for a frustrating experience if you are not willing to invest yourself that much into it,” Majo told me.“I would go as far as to say that the existence of this guide allows me to recommend the game to a friend in good conscience.”

Majo, concerned that the experience felt niche, thought most players would eventually bounce off the experience or otherwise not enjoy it, and said that this was based on his own experience. “Why not make it easier for people to get to the good parts with minimal suffering?” he suggested. Reynolds agreed. “The game is so lovely and well put together, but there are times in the game I just wanted to learn how to scale a cliff or get past a certain barrier.” 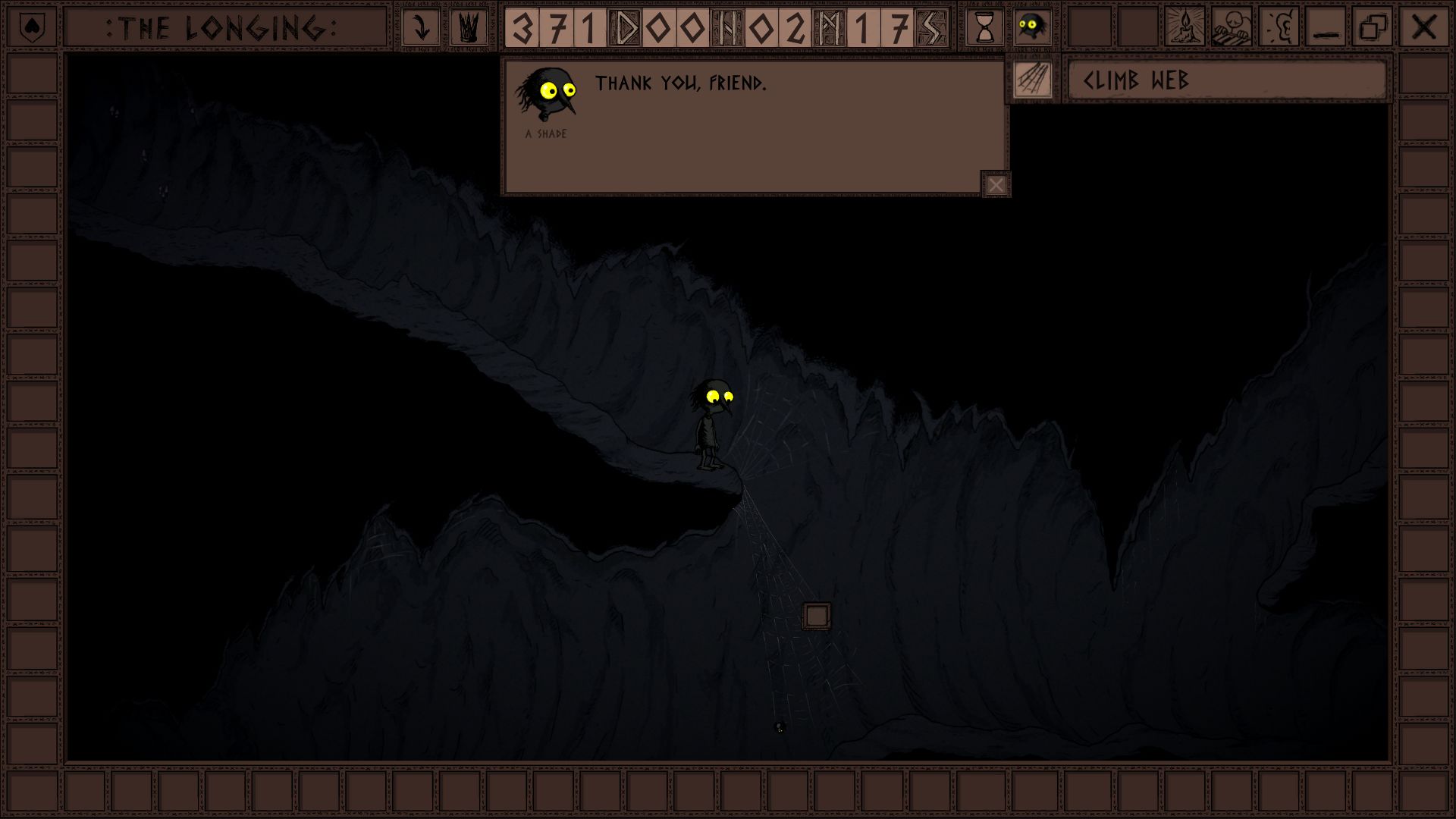 It's fascinating that both creators felt a degree of responsibility for filling a gap they perceived in the player experience. Their conviction is that the accessible sharing of a game’s secrets is an essential feature. It provides the equivalent of a fine-tuned, adaptive difficulty setting.

Despite in-game warnings provided by Pyta in the form of the Shade's comments to itself, some players tried to reach the end of an infinite hallway by walking for hours on end. Unverified comments claim they walked for hundreds of hours. A treasure chamber that can be broken into to collect golden coins saw similar obsession. Pyta confirms these coins are completely useless, but some players collected over 100,000 pieces in the hopes of making a discovery. “That was certainly unexpected," he said. "Although these meaningless endeavours really fit the mental state the game should put players in.”

The Longing’s Steam forums are currently alive with the hurried, excited sharing of findings from its latest updates; Pyta delighting in playfully taunting and lightly hinting when players ask him questions directly. Even games about isolation can’t hold back a community’s need to interact. Far from being a dynamic of opposition, games full of secrets inspire altruistic guide creators and community treasure hunts that almost become features of the game themselves. As one thread of community love for the Shade proves, though we may feel alone, we can find meaning together.