Ion Maiden Preview Campaign is, without question, brilliant. A mad-speed Build engine project that feels like it was made by present-day time travellers who went back to 1996 to make a game. It's stupid and crass and loud and gory and everything else you could hope for. And this is just the two-mission mini campaign while they finish the full game.

Quite why any game would still want to associate itself with the wretchedly dreadful Bombshell, I'm not sure, but Ion Maiden is framed as a prequel to that pile of toss. This means it shares the same protagonist, one Shelley Harrison, and the setting of an invasion of sorts in Washington DC, although almost nothing else, thank goodness.

Instead this is gloriously evocative of that mid-90s post-Doom II era of FPS games, where movement was idiotically fast, enemies were idiots, and secrets were hiding behind every other wall. The Build engine has been updated in many ways, but remains very true to its original look and feel. It runs at modern resolutions, the HUD is crisp and clear, but the world itself is clunky and boxy in all the right ways. It can now better recognise pushing around the 2.5D objects, there are physics, and some objects are even rendered in what I'm going to christen "2.8D", jumping between four or so different renditions of the sprite as you walk around them. And while Duke3D was the game that mastered verticality (after Dark Forces introduced it), there's a very modern understanding of mouse-led FPS thinking.

It's a game about screaming around at outrageous speeds, hammering the Use button on any object or wall that looks out of place just in case, and of course spreading enemy gibs about the walls and floor. It feels so fluid, so natural, and such a blessed respite from the bum-following misery-trudge that is so much of modern first-person shooting. It's ludicrous in every way, enemies aiming with ridiculous skill, and you tasked to work out how to deal with that.

The biggest and best lesson it takes from Duke3D, beyond just the concept itself, is the destructible scenery. Duke blew our minds in 1996 by having levels that could change their layout via the destruction you wrought, and it's damned revealing how fresh and original the same feels today in our current swamp of unchangeable fixed-state open worlds. It doesn't do anything groundbreaking, apart from, er, literally I suppose, but it's just so odd that scripted actions seeing the level collapse about you again feels so innovative. That and shooting fire hydrants sometimes blasts holes in the walls leading to secret areas. That's always cool. 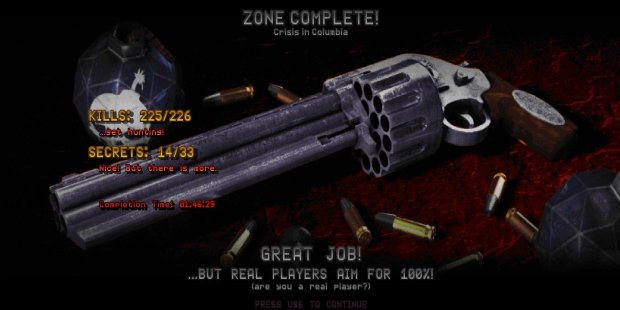 Secrets are another aspect of those Olden Days that have been splendidly embellished upon here. There are a ridiculous number of them, such that when I finished the first of the two chapters in this preview, it told me I had 19 left. Nineteen. And I'd been looking for them, and finding loads! (I only had four left in the second.) The secrets in question aren't just there to provide extra armour, ammo and health, but also add a significant extra purpose in playing. Find a bit of scenery that looks like you can just about jump onto it, then see a beam you might be able to land on, then climb up some more, here, there, and into that hole, and here's a stash! It makes the world much more interesting to pick at, rather than just being a corridor to run down. Seeing a locked off area becomes a mission, and even if all you get is an extra medpack, the sense of achievement when you find the entrance hidden in the toilet cubicle, then the secret switch on that dark wall, makes it all worthwhile.

It also adds an incentive to replay levels and try to find the ones you missed. I still have 16 to find in the first area, and good gravy, I've searched. I really want to keep plugging away at it.

It's not completely free of the sorts of puerile asides that have always festered in 3D Realms' games, and for some that will be a comfort, for others it'll draw out another eyeroll. The issue has never been they're a bit rude or whatever, but that they're just not very funny, and this is no exception. Signs mocking MTV and McDonald's feel like they too were transported from 1996, while posters advertising suicide assistance feel pointlessly crass without any attached gag. Although I'll concede I'm immature enough to have enjoyed a giant "WASHINGTONS 4 SKINS" sporting banner. And saying all that, it's hard to imagine how it would feel like a proper Build engine game if it didn't have some crappy unfunny crass jokes in it.

Fortunately Harrison is by orders of magnitude a better player character than her crushingly embarrassing outing in Bombshell. While her barks aren't brilliant, and repeat too often, I still enjoyed "Clean up on aisle your ass" the first time I heard it. "I spray, you pay," she utters as machine gun bullets fly. Thank God, in the two large levels available at this point at least, there are no gut-churning, groin-grinding attempts at faux-feminism this time out. She's just a bad-ass protagonist, without making a fuss about it, which is ideal.

More significant issues are present. The most annoying, that should be an easy fix, is Harrison's bizarre inconsistency when looking for secrets. Sometimes she'll say, "There's nothing here," more often say nothing at all, and most confusing, frequently make a noise like she's hurt. What you want, of course, is one simple innocuous noise that means "nope", so you can slide down a wall hammering E without listening to what sounds like a broken sound effects CD.

Then there's all sorts of clipping issues (I never got stuck, but I looked through a lot of walls) where the levels need a few more rounds of tidying, and I've had it freeze up, which would have been fine if it hadn't, for some reason, lost my quicksave data. But, you might say, this is early access! Well yes and no, because the sale page clearly states, "The Preview Campaign is a fully finalized and polished product, which you can all play right now." Aaaaand, no, it's not polished. 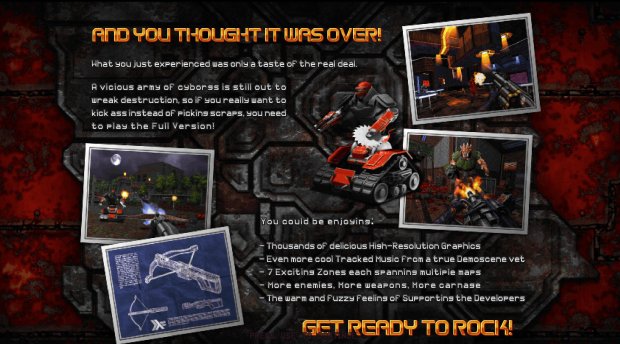 Which brings us to the final similarity, and indeed dissimilarity, between this and the games of the Apogee/3D Realms heyday: releasing a sizeable portion of the game, ending in a message encouraging you to buy the full game. The concept seems almost impossibly alien in these days when even a demo is a rare gem for a new game release, but in the early to mid '90s, it was perfectly common for games to release up to one third of themselves as "shareware". Completely free, intended to be copied, shared, and played. A huge chunk of Duke Nukem 3D was free! The first third of Doom was free! And Ion Maiden mimics this model right up to including the screen at the end thanking you for playing the preview, and encouraging you to buy the full game! It just forgets the free part.

I'd not have even thought about it if they'd not put the card in, of course, and I obviously don't begrudge their selling this splendid section presumably to bring in some cash for finishing the full game. It just seems odd to be reminded that this isn't shareware in such a glaring way!

Of course, for the £14 here you're getting the full game when it's eventually finished. And this, they say, isn't even part of that full game, which will be its own self-contained campaign. That's still six months away, with this out there as a taster for what's to come. And if it can match it, then goodness me it'll be a pleasure to have.

This isn't about nostalgia - that's really important to make clear. I mean, yes, I can't untangle myself from that entirely, but I'd contend that so much has changed in the realms of FPS gaming in the twenty-something years since that those core ideas are now maverick and refreshing. That the game boasts in its own sales pitch that it contains "no procedural generation" is very telling. Obviously the Serious Sam games' occasional appearances have kept this spirit alive, but in their own distinct broad territory. FPS hasn't felt like Ion Maiden for a ridiculously long time, and it's absolutely glorious to have it back. I cannot wait to see the full campaign later this year.