Every cloud has a silver lining, and let's be honest; isometric ARPG/shooter Bombshell was a pretty big (possibly mushroom-shaped) cloud. Originally planned as a Duke Nukem reboot, legal scuffles forced the game to re-brand, and it all turned out a bit pants anyway, leading developers Interceptor Entertainment to fold not long after.

The silver lining may be just what old-school shooter fans have been clamouring for, though. The Build-engine retro FPS now known as Ion Maiden was originally planned to be a promotional tie-in with Bombshell (and still shares a protagonist). It fell off the radar after Bombshell turned out a dud, but it seems that side-studio Voidpoint never stopped believing. Without warning, and under the (recently purchased) 3D Realms banner, Ion Maiden has launched direct to early access.

To everyone's surprise, it may actually be really good.

While Voidpoint/3D Realms have been rather remiss and forgotten to send me (our resident retro FPS nerd, after Alice, of course) a preview build, I've heard quite a lot positive about Ion Maiden on the grapevine from a folks that wouldn't be satisfied with anything short of true old-school authenticity. After watching a chunk of it being streamed live. I reckon this may well be something special.

The quality of the game isn't a massive surprise once you dig into who Voidpoint are. The team mostly consists of long-time Duke Nukem 3D mappers and modders, as well as some of the development crew from EDuke32, a popular source-port that brings hardware rendering, improved controls and a lot of bug-fixes to the occasionally wonky old Build engine. Ion Maiden runs on a variant of this engine, effectively making it a real DOS game running under emulation, of a sort.

One of the biggest departures from Duke Nukem 3D is the removal of hitscan weaponry. Bullets from enemies are fast-moving and avoidable projectiles, rather than just instantly deducting precious digits from your health pool. This isn't the first neo-retro FPS to do this either - it's a feature that's found its way into some major Doom and Quake mods such as Brutal Doom & Arcane Dimensions. 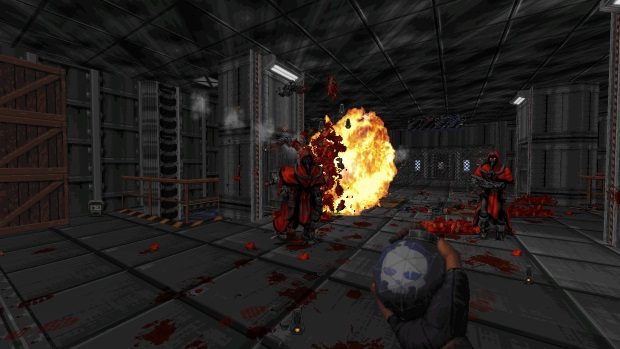 Perhaps taking a note from Blood's book, thrown explosives are used a lot more than in Duke 3D as well, appearing in the form of the Bowling Bombs. Thrown like grenades, once these projectiles land on the ground they roll for a distance, homing in slightly on any enemies in their path, meaning that trick-shots around corners are not just possible but highly encouraged. As with the best Duke 3D derivatives, there's a lot of environmental interaction and a lot of breakable objects, made all the more clear when you start playing around with things that go boom.

One other divergence from Duke Nukem standards is the absence of crude sexist humor. Everything I've seen so far seems relatively innocuous, with protagonist Shelly “Bombshell” Harrison frequently cracking wise, but not particularly at the expense of anyone beyond the expendable cyborg goons that you're chewing through. In the official art, she's even wearing practical-looking gear, including a chunky, flat breastplate that actually looks like real armor that might stop bullets. A significant improvement over her wonky design in Bombshell itself.

The current version of the game in early access is technically not a shareware-type release, but rather a standalone handful of levels designed for preview purposes, capped off with a boss fight. A glorified demo, then. While they will be updating the early access build with some new features and content over time, it won't grow that much until the full game is released in an estimated six months. The final product will include full mapping and modding tools, and Steam Workshop support from day one, or so Voidpoint promise, and the price won't be going up after release.

Ion Maiden is out on Steam Early Access now for £14/$18, and the final game is planned to release DRM-free via GOG as well.