I have long described Kingdoms Of Amular: Reckoning as one of my favourite games. It has also been a long time since I checked. And as you can see, despite its status in my gaming life, I still can't spell its name correctly. AmAlUr. Am-ah-lure.

With the very welcome recent announcement that its most recent owners, THQ Nordic, are remastering it, I thought I'd return to give them a few pointers of what needs fixing. And that does not include the troll rolling.

The answer is: surprisingly little. KoA still just damned works. It's still this utter peculiarity, a sort of solo MMO. It's made as if all traces of the single-player RPG had been lost in an apocalypse, and had to be reverse engineered based on fossil records and World Of Warcraft. And that's why I love it! It's WoW for misanthropes, a massive open world RPG with dungeons and fetch quests and level chasing without the awful bother of dreadful other people. 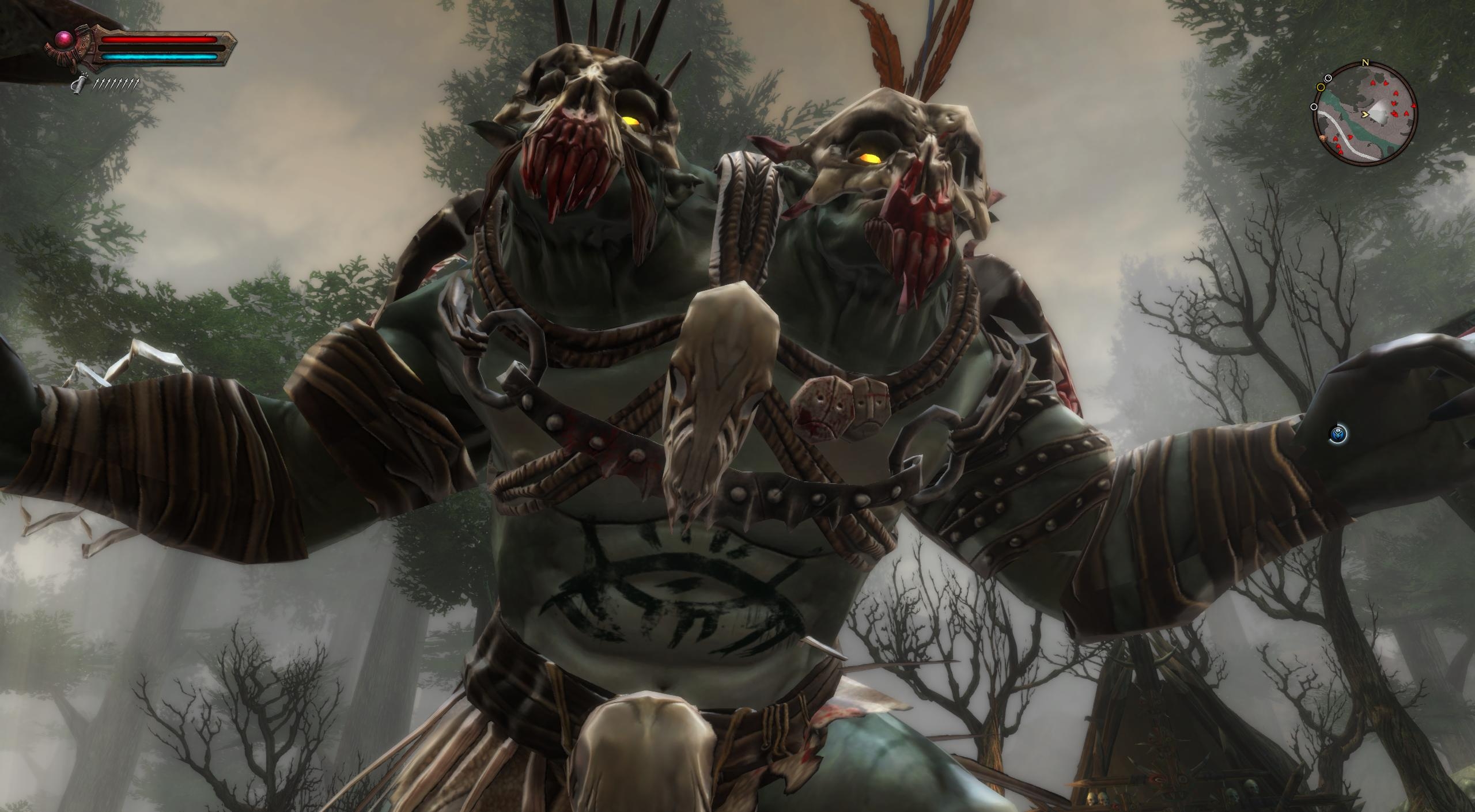 I think the origins of 2012's KoA have been retrodden enough that we don't need to go over them again in any detail. In short, a baseball thrower called Curt Schilling borrowed a stunning amount of money from Rhode Island, and then somehow lost it all in the process of his 38 Studios' making a properly good game. That they were intending to make an MMO, and that it involved a gruesome bankruptcy, hundreds of job losses just a couple of months after release, and took out Big Huge Games with it, rather sours this further. I've honestly never quite gotten my head around what happened, but none of it seems like it was good or happy, and that such a massive and playable game was produced during it all seems miraculous.

Then to rub salt and vinegar in the wound, during THQ's fire sale, no one forked out to by Amalur's license! It would be another five years before "THQ" Nordic would pick it up. (Have we forgiven them for that awful 8chan thing yet? I can never keep up.) And that 2018 news brought hope, because Not-THQ Nordic do seem to be trying to breathe new life into the franchises they're hoovering up, with some nice Darksiders remasters in the last couple of years. (Albeit with a crappy Darksiders III.) And while I can only assume that with the game they'd also have bought up the at-least-started sequel, and the half-finished MMO, I'll take a remastering, thank you kindly. 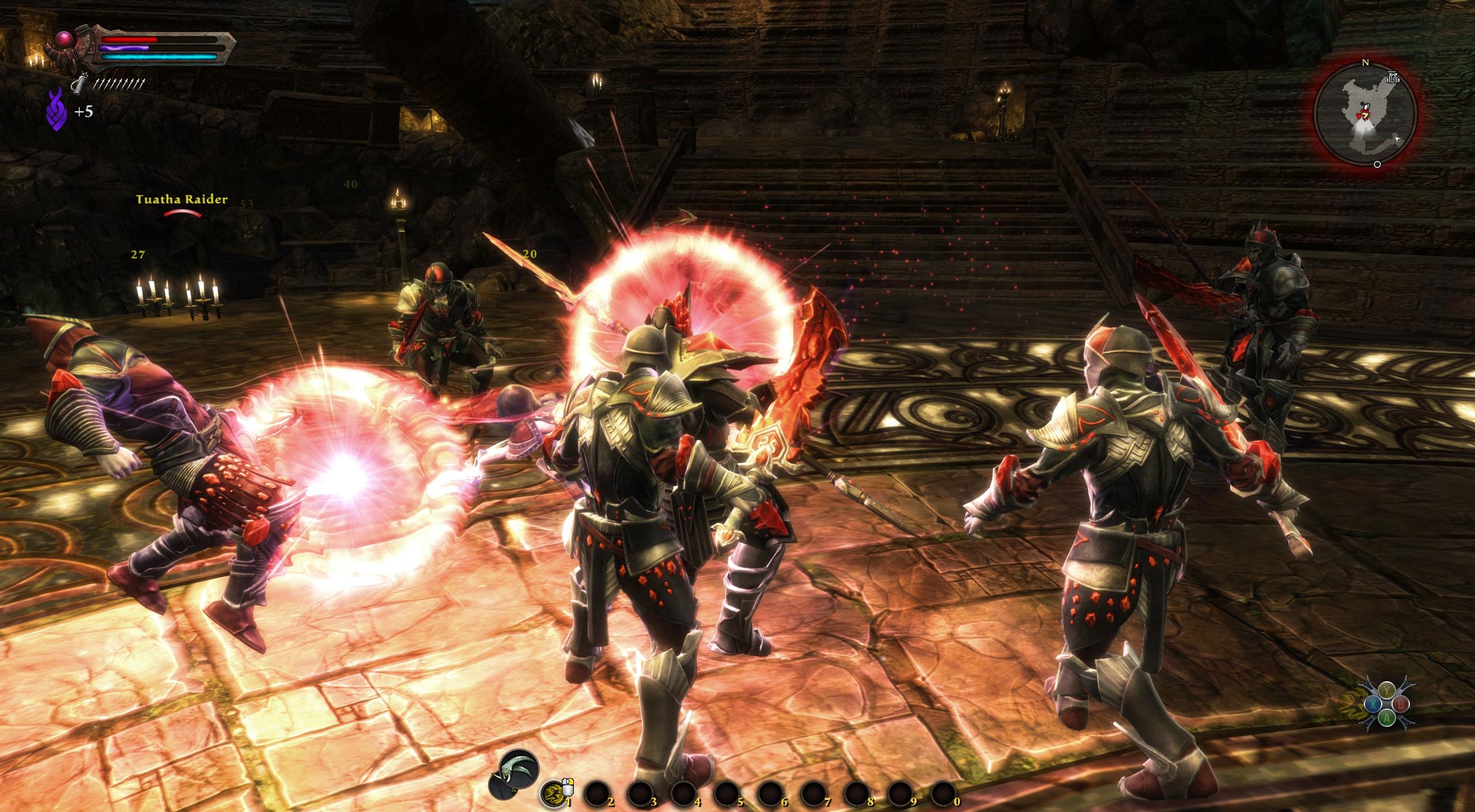 Here's the most important thing: the game barely needs changing. KoA was a third-person action game inside an RPG setting, which certainly confused a fair few on release, but holds up tremendously well. Despite some extremely silly and tiresome people pretending the graphics weren't good enough on release, the game still looks great eight years on. It'd be lovely to see some texture improvements, and certainly HD versions of the cutscenes, but honestly, it's a damned pretty game as it is. As for the action, it is a warm knife through soft butter, bursting with energy, and feeling great all the time. Too simple, yes, and gosh I'd welcome tweaking the combat to be a little more Darksidery, but it always feels splendid to bash the enemies to bits. The voice acting is almost all great (apart from some extremely dreadful "Scottish" accents here and there), and goodness me there's an awful lot of it. Too much? Yes, probably. But too much of a good thing.

What Amalur needs is fixing. 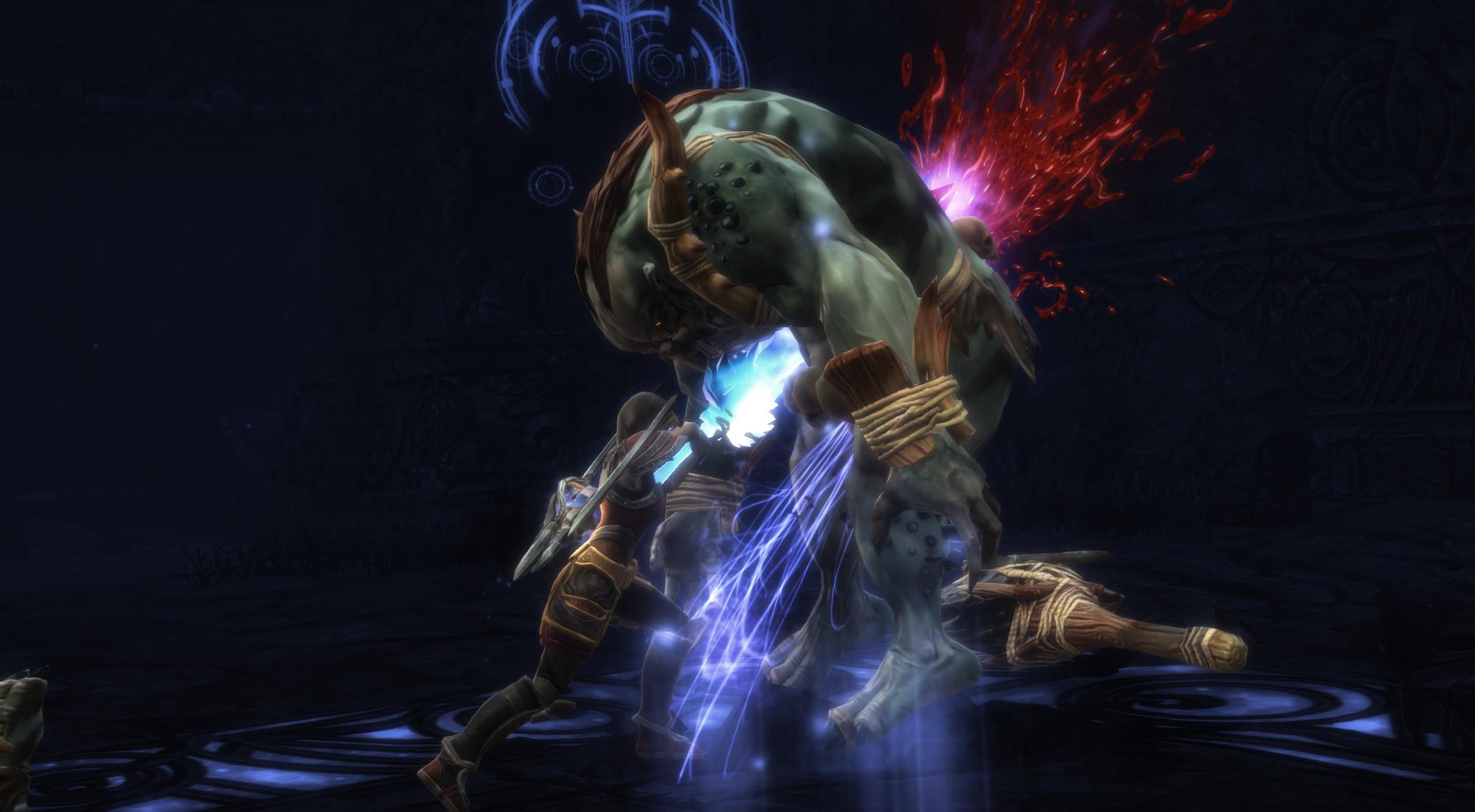 I could write them out just the tidiest list of tweaks they'd ever seen. I'd even draw in little boxes for them to tick as the fixed them. We could be a team on this. Because if you wrongly decided you didn't like KoA because it wasn't exactly the same as some other game you liked, there's no amount of fiddling that'll turn this into something you're going to let yourself enjoy. What we need here is for the giant pile of niggly irritants to be patched, so that proper decent people who already love it can return in glory, and a whole new audience of decent-minded folk will feel more immediately welcome.

For instance, creatures showing they've dropped loot needs to be instant. That sounds a tiny detail, right? But oh my, it's infuriating. Kill five creatures in one area, none of them show the loot twinkles, and you run on, only to turn around and see that now three of them are glowing. No! Who's idea was it to have a delay on that?! Instant twinkles. First item on the list.

Second is getting that quest log fixed. Something went very wrong there, and as soon as you've got more than about fifteen quests running (and you'll likely have thirty at any time), they stop displaying properly, an ever-growing number of buttons and details disappearing the more quest names that are visible in the list. It's such an odd bug, and requires collapsing the list every stinking time to be able to read any useful details about the one you're pursuing. Bonkers.

Then third is the volume levels. There are all these shrines that tell you lovely poetic details of Amalur's vast historic lore, but for some reason they're voiced so quietly you have to crank your speakers, and then make absolutely sure you don't wander near anything else that makes sounds. 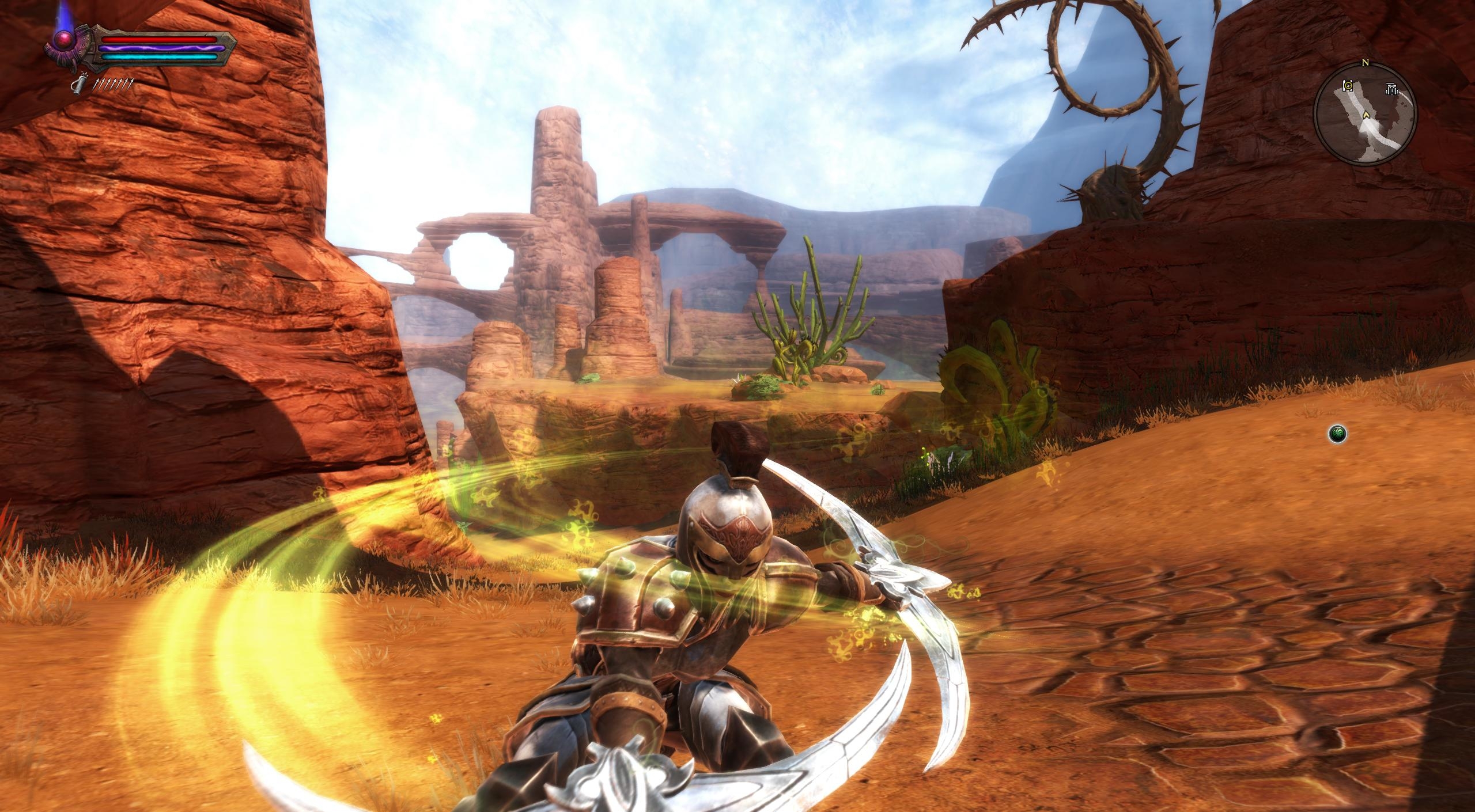 After that, I'm not so fussed, honestly. Those three things are far, far more annoying than they sound when you're playing. I mean, I suppose I could add a wish that scrolling down the list of new special moves didn't mean erasing the "new" star before you're able to see which move it was next to. That's weird and stupid, but I can cope. What I find myself worrying about far more as I replay this mammoth game is what they might wrongly change for the worse.

Because Kingdoms Of Amalur: Reckoning is assured of its stone-cold classic status based on the crate smashing alone. I cannot express how much I love the crate smashing! It is, by a country mile, the best crate smashing in any game ever, and that's against some tough crate smashing competition. Going wild with your weapons at a madcap array of wooden boxes and barrels is pure gaming joy, the sound, the speed, the destruction, all enormously gratifying. Then comes the "ching!" sound of your having discovered gold coins by doing so! And best of all, because KoA knows what it's doing, those crates re-manifest themselves while your back's turned, there to be crashed to bits all over again the next time you're nearby. Actually, Kaiko, since you're now presumably scrapping any incorrect changes you've made in accordance with this article, could you add a little bonus mode where an entire region is just covered in crates for me to smash through? Many thanks. 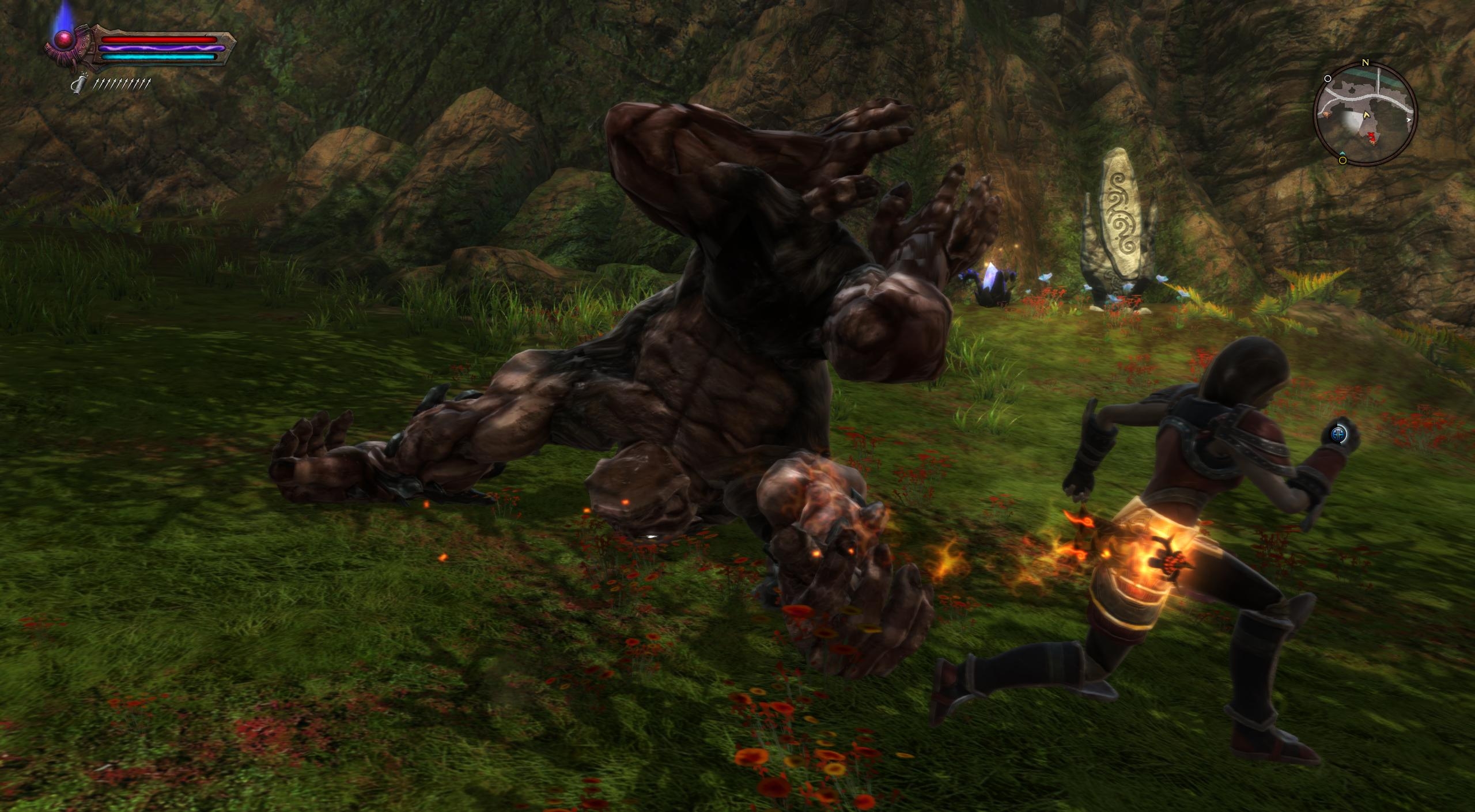 And even more important than crate smashing is troll rolling! Please, if nothing else, keep the troll rolling. There's this weird glitch in the game. Most creatures on their deaths lose their status as a physics-affected object. They freeze in place in their slumped form, and can be walked through, to prevent the player getting tied up in dead bodies during big fights. But for some reason the game's larger creatures have about ten seconds of physics grace bestowed upon their corpses, and as such can be bumped and pushed and rolled. This is fun enough on its own, rolling a troll down a hill. But it gets even better because when that few seconds is up, they freeze in whatever position they're in. So thus is born the game of trying to pose these creatures in the silliest form possible. It's not simple, either! Not knowing exactly when they'll freeze, and their being big, lumbering blobs, makes capturing the perfect moment a proper challenge. God I love it. 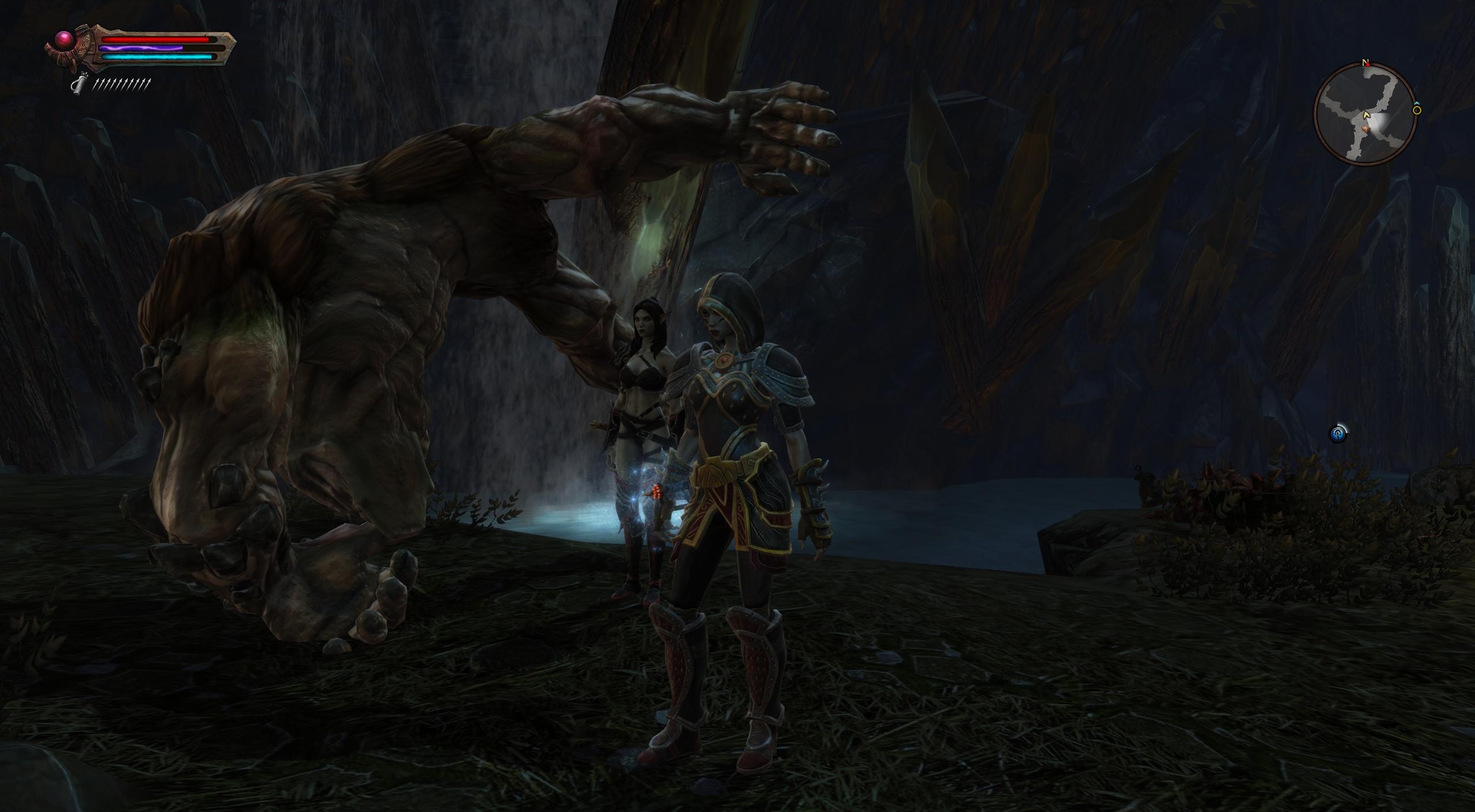 Honestly, I get why some people find the game a little average. There is far too much waffle from far too many characters, in a game that's gargantuan, and keeping up with what each individual wants is overwhelming. In fact, so similar is it to MMOs that I've found myself this time skipping past the conversations to just read the quest description. And yes, the combat is a little undercooked, really needing more complexity in its special moves, but as I say it's still just so crunchingly satisfying to execute anyway. It's a bouncy castle of an RPG, bright, colourful, and massively expanded by airy nonsense. But you know what's an enormously fun way to spend some time? Bouncing around on a bouncy castle. And that's the key here.

KoA is such an enticing timesink, in all the ways that WoW was outside of its social aspects. That endless chain of quests to complete, that constant sense of progress with levelling, new equipment, new skills, the ever-expanding world with seemingly endless new spaces to explore. It's all here. And what's not here? Ghastly people, being ghastly, ruining the game for you. I played World Of Warcraft as if it were Kingdoms Of Amalur, constantly frustrated by any element that required interaction with other human beings. So in 2012, KoA was like a gift from the gods, the MMO experience I'd craved, purged of all you terrible people. I am supposed to write this column on Monday, but it's dangerously close to the end of Tuesday as I type, so completely pulled in was I that I kept having "just one more half hour". As I write, all I want to do is go back and play some more, despite not being the least bit invested in its story of faeries and fateweaving. It's just so enormously satisfying to be playing. 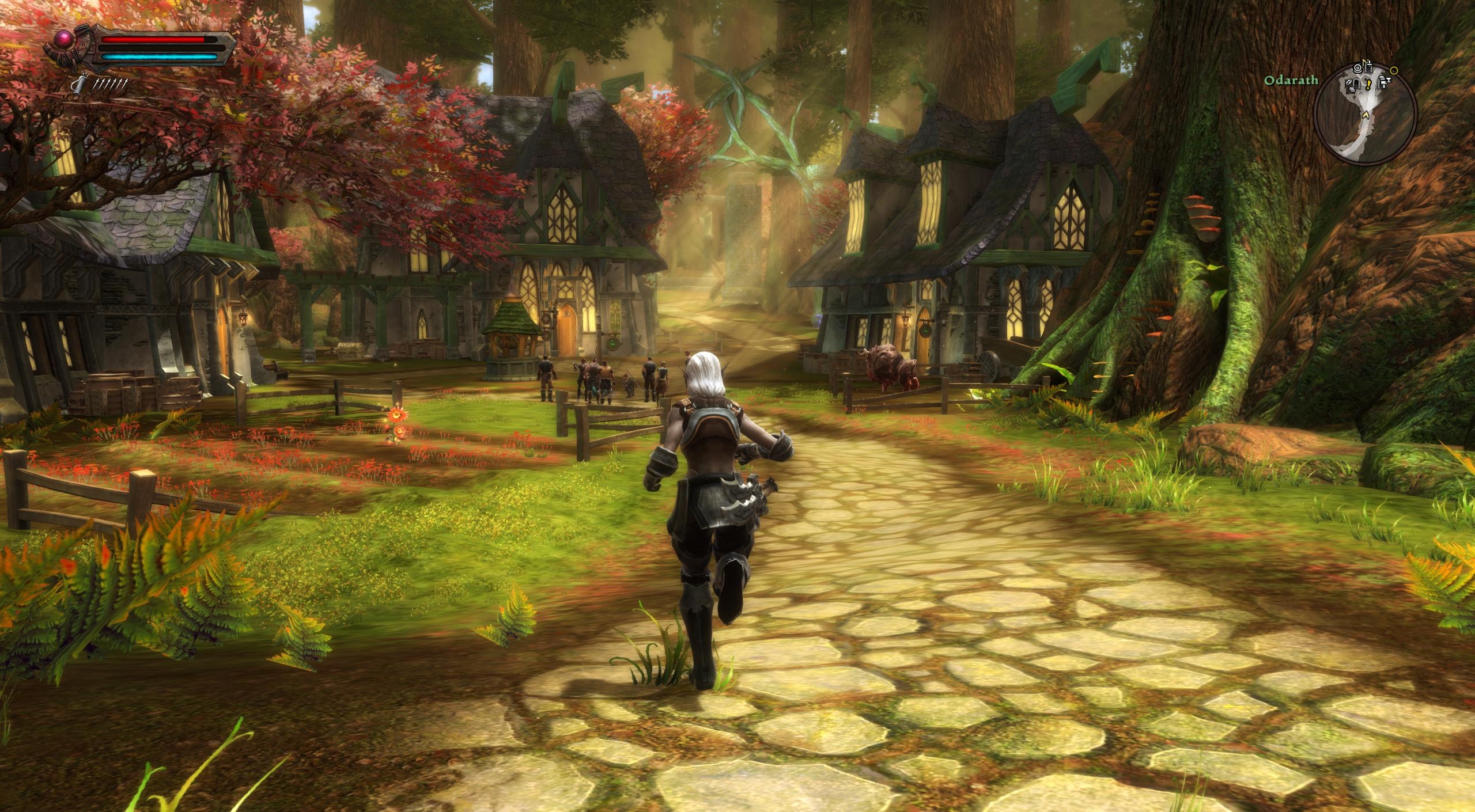 Clearly Nordic Games made a mistake trying to keep this project a secret until so late, as now Kaiko have to implement all my changes, or lack thereof, by August. But if they want my full tick-list, they just need to ask. Meantime, aside from a few irritating details,
Kingdoms Of Amalur is already perfectly playable today as is.

Can I still play Kingdoms Of Amalur: Reckoning?

Yup! Works right out of the tin, no need for patching for modern resolutions, nothing. An odd choice for remastering, you might correctly note.

Should I still play Kingdoms Of Amalur: Reckoning?

Yes! Don't be like the awful people, be like the brilliant people who can't stand the awful people! Amalur is a single-player interpretation of the MMO (albeit one that was originally intended to be an MMO), and has the best crate smashing in gaming history.