I'm never one to shy away from criticism. I am the sort of brave, intrepid fellow who takes it on the chin, and uses it to begin introspective journeys in search of clarity and truth. And it is for this reason, as you will see, that I have returned to the 1993 version of Sierra's King's Quest VI. 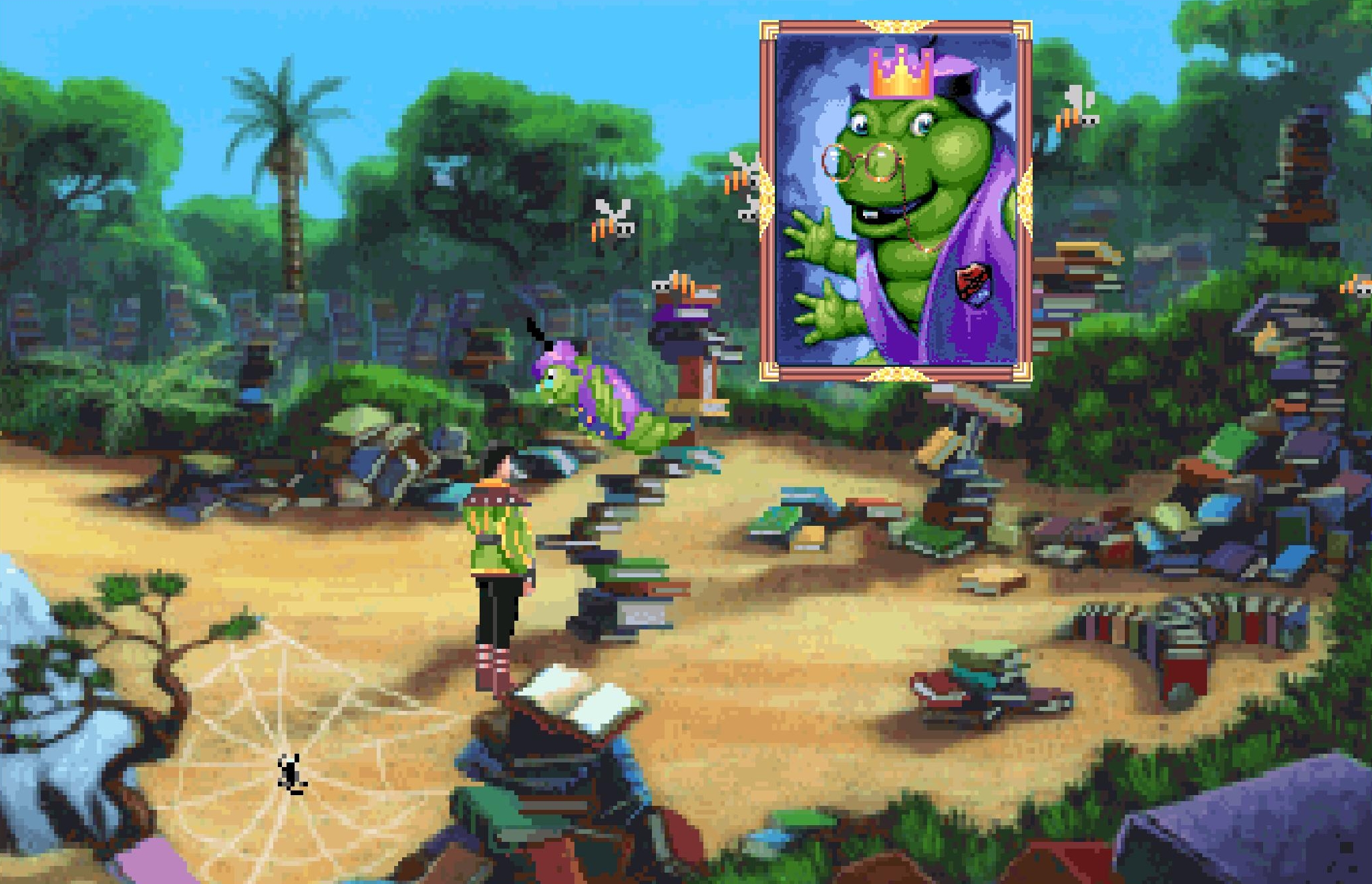 I stumbled on a thread about me. I'm not the sort to go Googling for my name, because, well, the results always tend to be a lot like this. And I always want to march in and defend myself, pointing out everyone's terrible arguments, and proving they were wrong to be horrid about me. That, of course, never works, and that's why it's best not to ever read this stuff. Except I found this one by mistake when searching for something else I'd written on RPS, and here we are. It was a furious response to my slating of that uber-terrible King's Quest reboot in 2015, and it said:

"He even makes it clear he hates Sierra games"

"Apparently he hasnt given a single legitimate review of a major video game title in his entire life. and he apparently wasnt even at destructoid for very long, because most of his reviews are at eurogamer. so, he was fired from his previous job, and now he's writing for an inferior website"

"The original series were mostly terrible, twee and poorly constructed adventure games, but it had its moments, and certainly found its place in nostalgia."

But what if time has improved them, like an old wine that people pretend tastes different from a brand new bottle of wine, despite all wine tasting like batteries? Heck, I said they had their moments, after all. And it's probably fair to say that most people consider the series' defining moment to be King's Quest VI. So I replayed King's Quest VI. 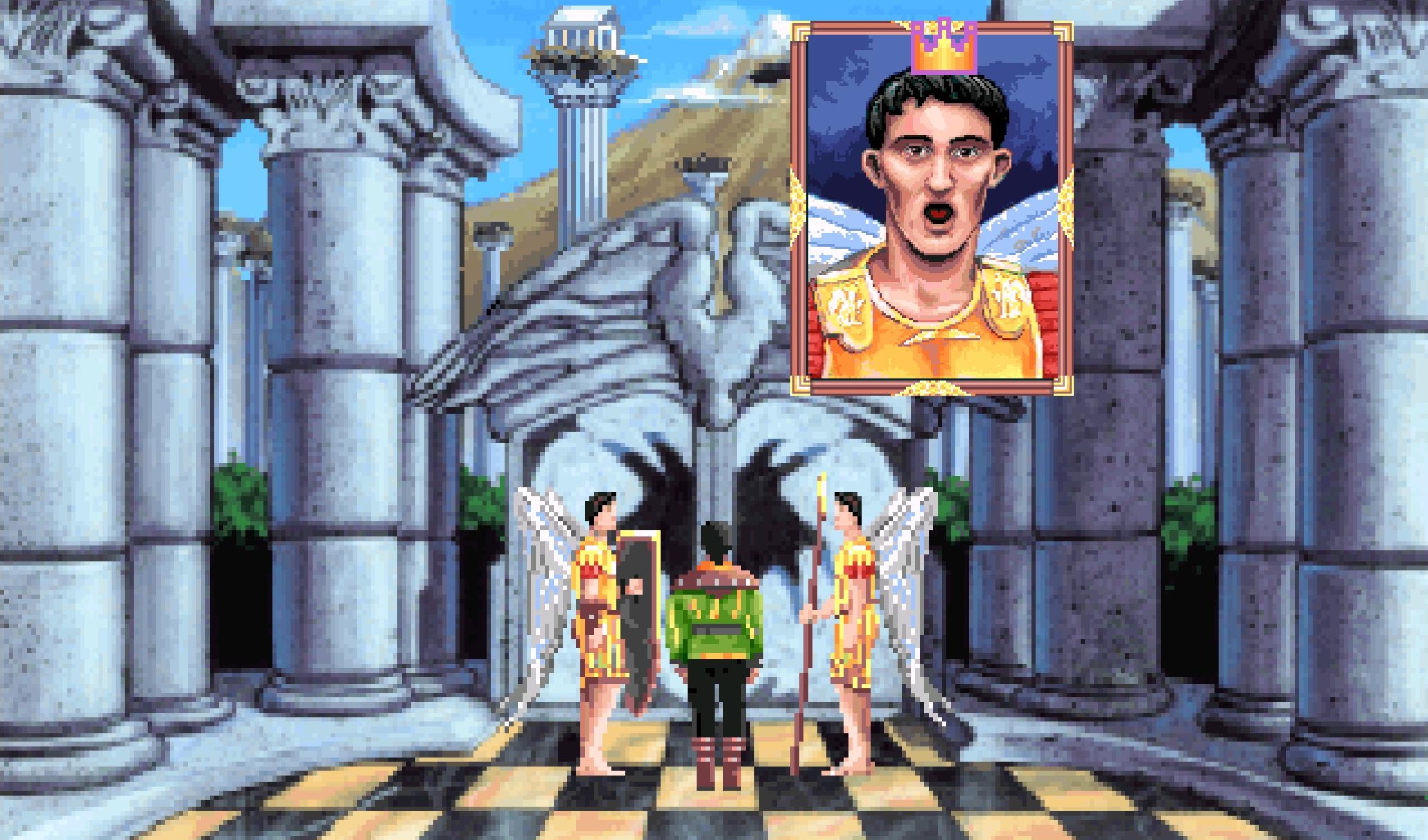 The adventure game genre peaked in 1993. That's just a science fact. While there have been many, many excellent adventure games released since, and to this day, 1993 was the year of Day Of The Tentacle, Sam & Max, and Gabriel Knight. In fact, 1993 was the greatest year for all video games ever, and I challenge anyone to prove otherwise. But was King's Quest VI truly part of that peak, and how does it hold up some 27 years later?

It immediately starts off with three big advantages. The first is that this is a game written by Jane "Gabriel Knight" Jensen, and not Roberta "Phantasmagoria" Williams (although she remained as KQ6's lead dev), which perhaps accounts for the way its plot has always been taken more seriously than those of the rest of the series. The second is the opening moment, with Prince Alexander shipwrecked on a beach, which immediately invoked such a wave of nostalgia in me that I came over all aflutter. The third is that you can do that thing where you put the crown-shaped cursor icon on people's heads during the talkie bits. 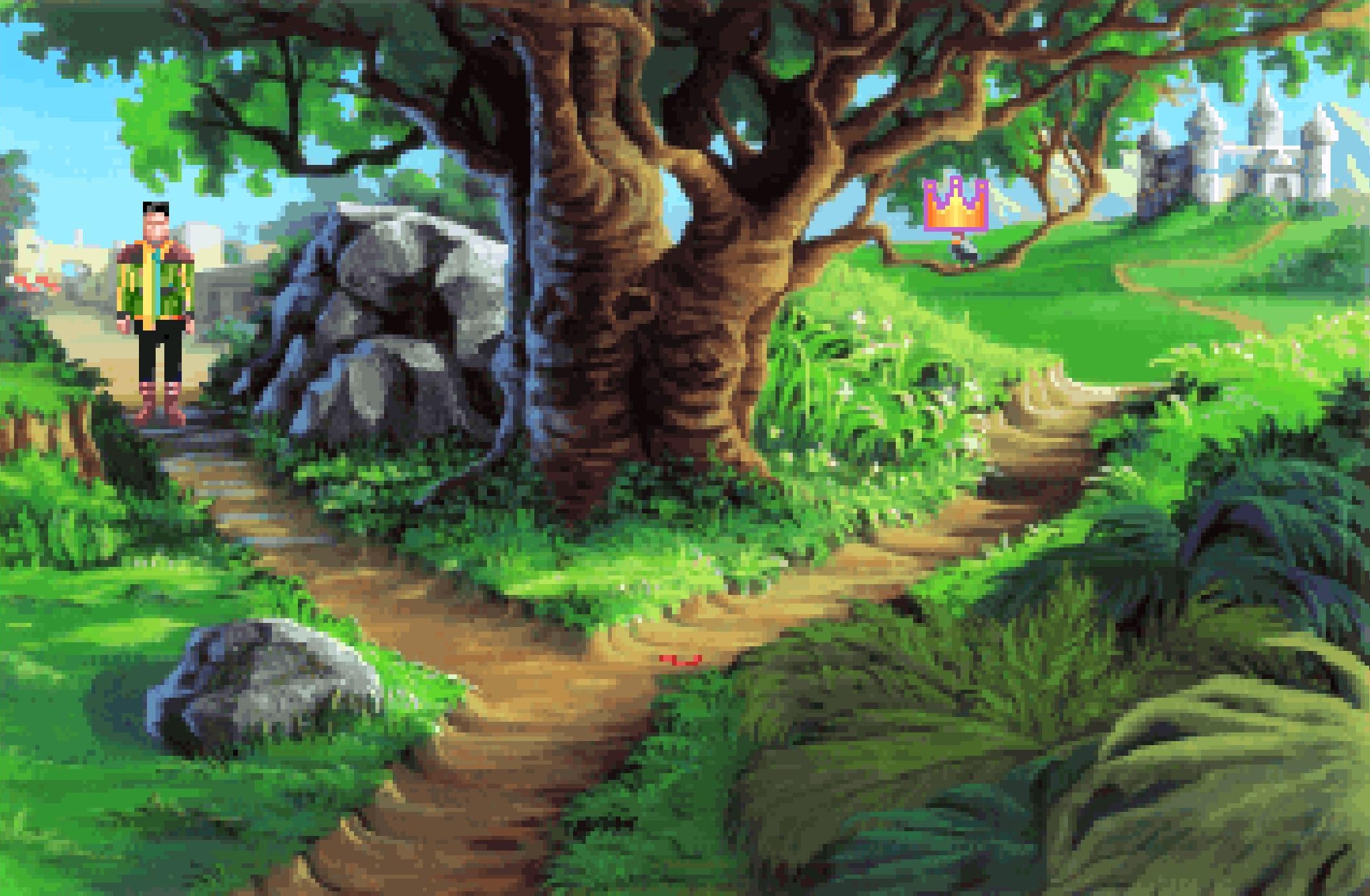 It's safe to say my aflutter state didn't last. King's Quest VI is - in between genuinely interesting scenes, a phenomenal amount of writing, and a surprisingly involved and malleable final act - everything that was wrong with Sierra games. It repeatedly kills you for ludicrously unfair or unpredictable reasons. It's monstrously wordy where it has nothing to say. And most of all, it allows you to play on and on and on (and on), into impossible scenarios. It even lets you reach the end of the game, before you discover it's impossible to continue because of some object you didn't pick up five hours previously. Oh Sierra.

All of which makes my biggest issue with the game so much more problematic: it just doesn't seem to exist for any particular reason. 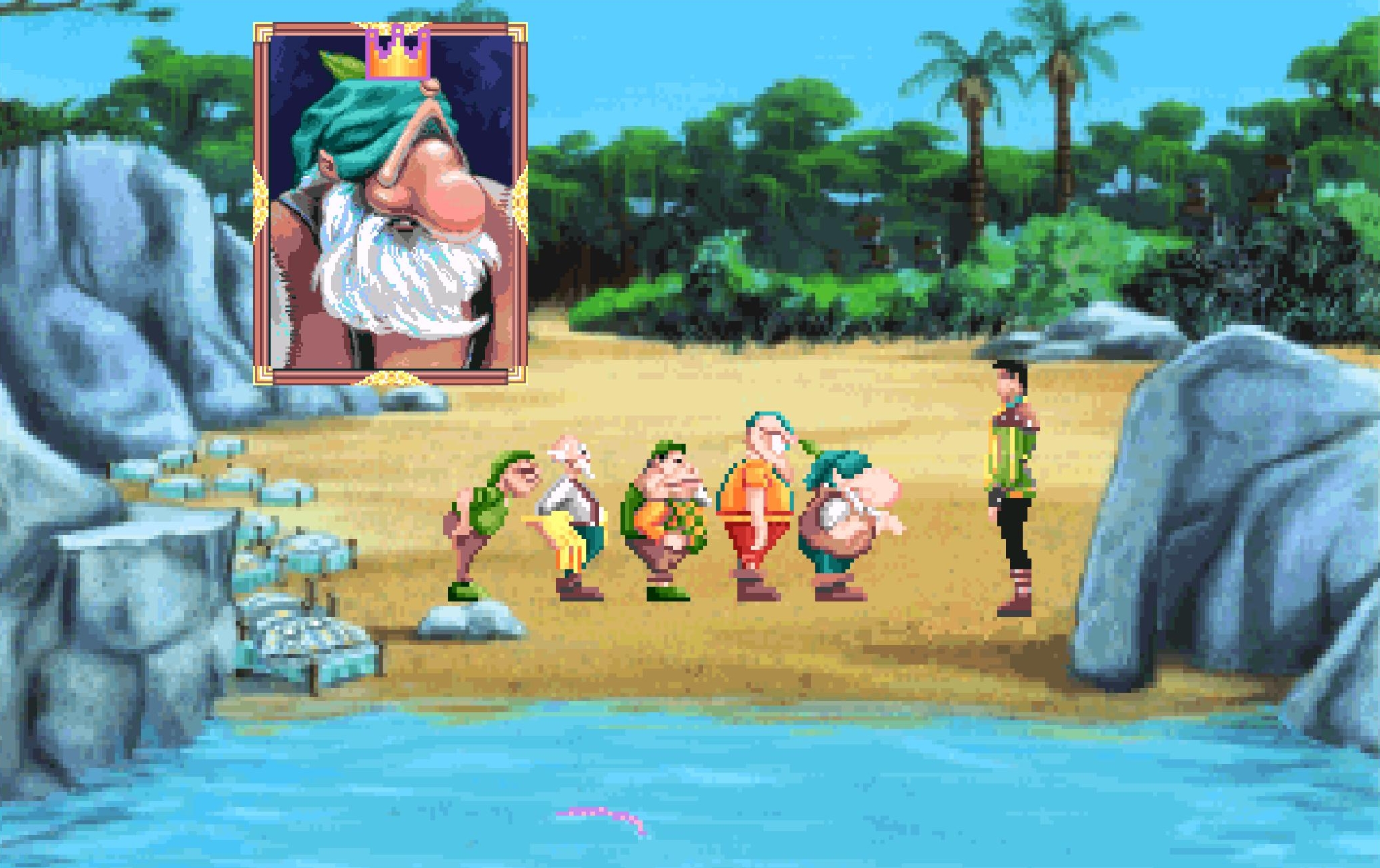 Not everything needs to have something bigger to say, nor be a social commentary. But there has to be a greater motive behind writing a story beyond, "I guess we need another one." The plot in KQ6 is that son-of-Graham Prince Alexander wants to check on a lady - Cassima - whom he fancied at the end of KQ5. So he pops to the Land of the Green Isles, only to discover her parents have been killed, and a baddie called Vizier Abdul Alhazred is going to marry Cassima. The rest of the game follows the stunningly original idea of wandering between a bunch of themed islands, in order to prove the vizier is in fact a baddie, before quite literally rescuing the princess. It then ticks all the King's Quest boxes by having each island be reminiscent of things from fairytales and myths, with a mad muddle of quest chains that are barely, tangentially, linked to the core goal.

Which is odd, considering the words Roberta Williams writes about the game in one of its many collected editions.

"I wanted to get away from just putting together a jumble of puzzles in some sort of meaningless quest."

I love this tacit admission that all the previous KQ games had indeed been a "jumble of puzzles in a meaningless quest", but it makes it seem even more of a shame to have repeated the principle in KQ6 anyway. The passage continues, "you should have a clear idea of what you're doing and why, with some emotion behind it". That's unfortunate, because A) I'm still struggling to figure out why I was climbing puzzle-based cliffs and getting Beauty and the Beast together, and B) KQ6 is the most peculiarly emotionless game. 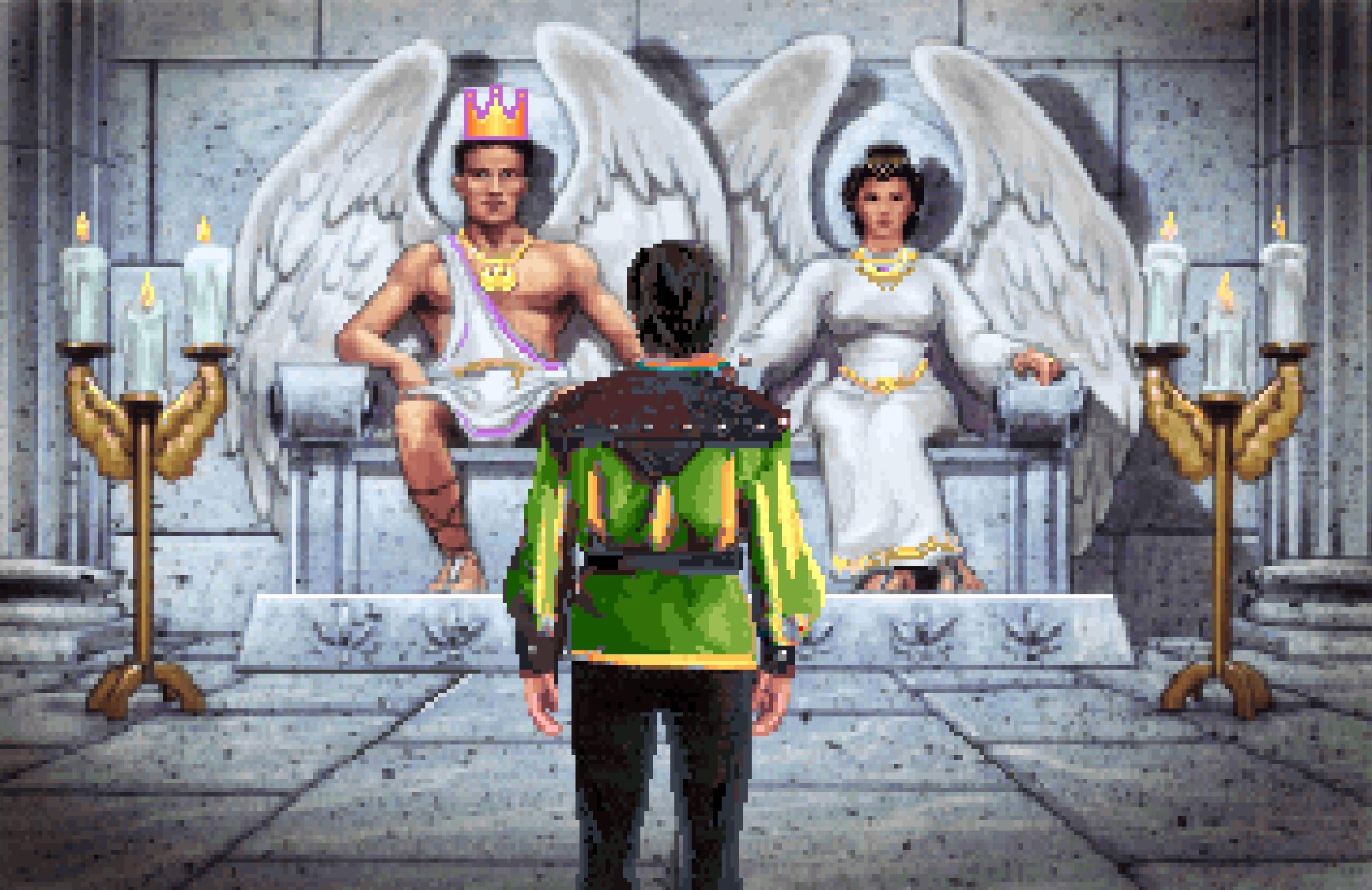 The Sierra adventure franchises were all so interestingly different from one another. There was Police Quest with its persnickety pedantry and paperwork, Larry with its lewd humour and boobs, Space Quest with its broad jokes and sci-fi spoofery, and then King's Quest with its... sincerity? Gosh, those games were so damned sincere - so po-faced. It's not a criticism, apart from most of the time when it is a criticism. Here, in KQ6, the earnestness is almost bewildering.

Where Space Quest games wrote a gag for every possible incorrect interaction with every possible object, KQ6 writes a deadpan, unironic reply for the same. So if you talk to a rock, or try to pick up the sea, it'll blankly inform you with bespoke text why Alexander isn't going to do that thing, or why the inanimate object didn't respond. An utterly astonishing amount of work has gone into ensuring every action the player could possibly think of has a written, voice-recorded, entirely impassive response.

It certainly doesn't help that Alexander is so horribly voiced. Whiny, needy, and insipid, the voice certainly matches the character, but it's a chore to listen to. He just seems so unlikable: he's that person who comes into the room, and makes everyone feel immediately tired just at the prospect of having a conversation with them. The rest of the cast is fine, if often a little pantomime-y. And you can of course switch to text-only dialogue, but sadly you can't have both text and speech at the same time, so you can't just read ahead of the worst actors and click them silent. 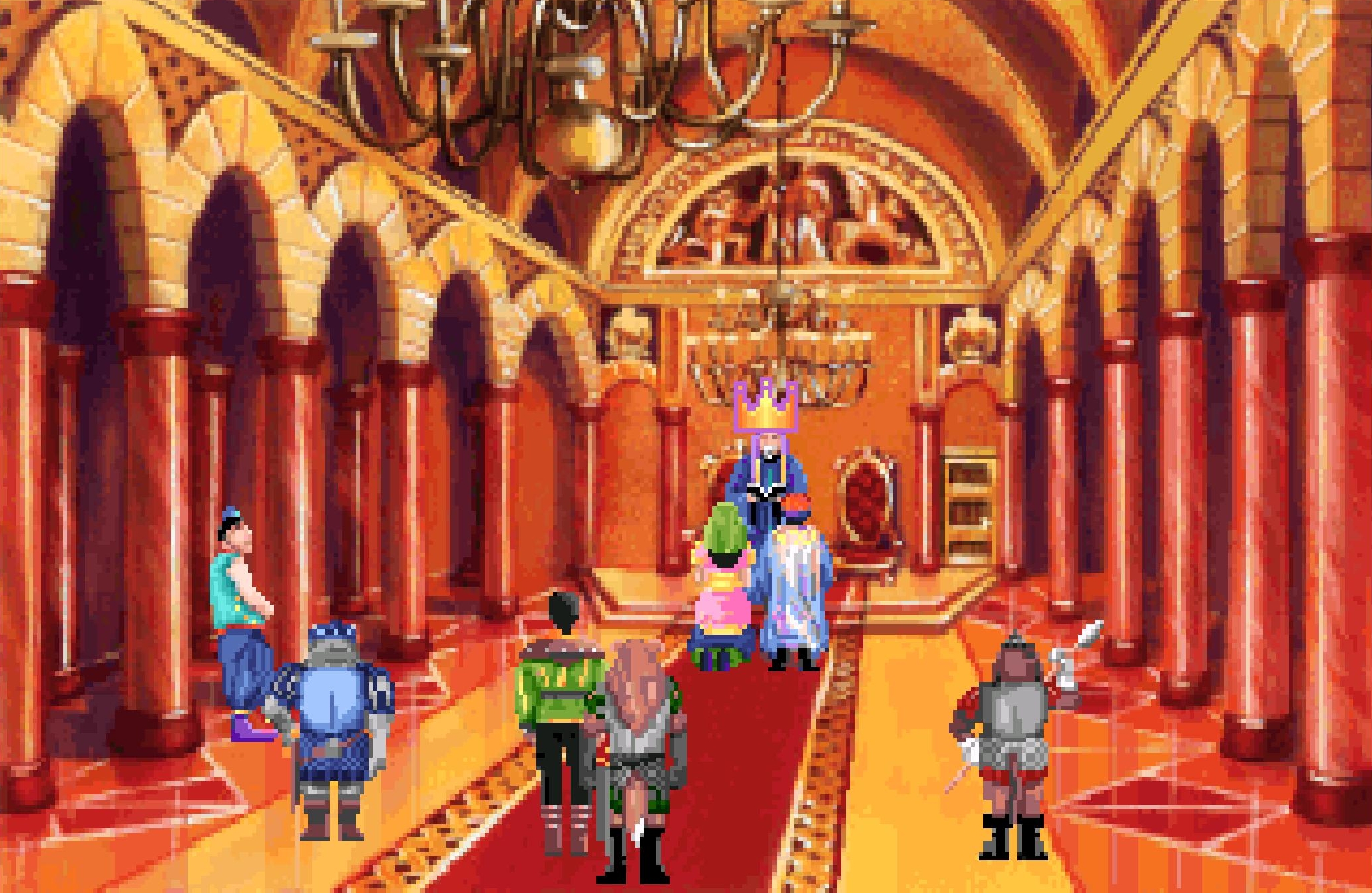 Even if none of this bothered you - even if you loved the empty, mindless story, the vacant writing, and the here-we-go-again approach to locations - there's no reasonable forgiving of KQ6's structure. At one point when playing today I had to find a walkthrough to work out what on earth I was supposed to be doing next. I was at the River Styx, and quite literally couldn't pay the ferryman. The return path was blocked. I was stuck. It turns out I was supposed to - and I promise this is true - have randomly discovered one of a dozen different dead ends in a ghastly maze level on another island that was completely unnecessary to completing the area, and noticed a tiny golden sparkle on one of the identical skeletons found in every one of the millions of rooms therein.

I mean, this sequence is appalling in itself, given it's a maze section in which the only way to discover you shouldn't take many of the exits is to take them, fall to your death, watch the sodding death animation, then reload to whenever you last saved. Now imagine doing that, but having to reload the save from floppy discs each time - that was the deliberate design of this game. And in that mess, that's where you were supposed to have stumbled on one of its wrong directions, and found the coins you needed for that level potential hours later. This is just one example. There are many others, including some that make the game literally impossible to finish, simply because you didn't pick up a leaf at one point.

And this is the game that's held up as proof of the greatness of the King's Quest series. 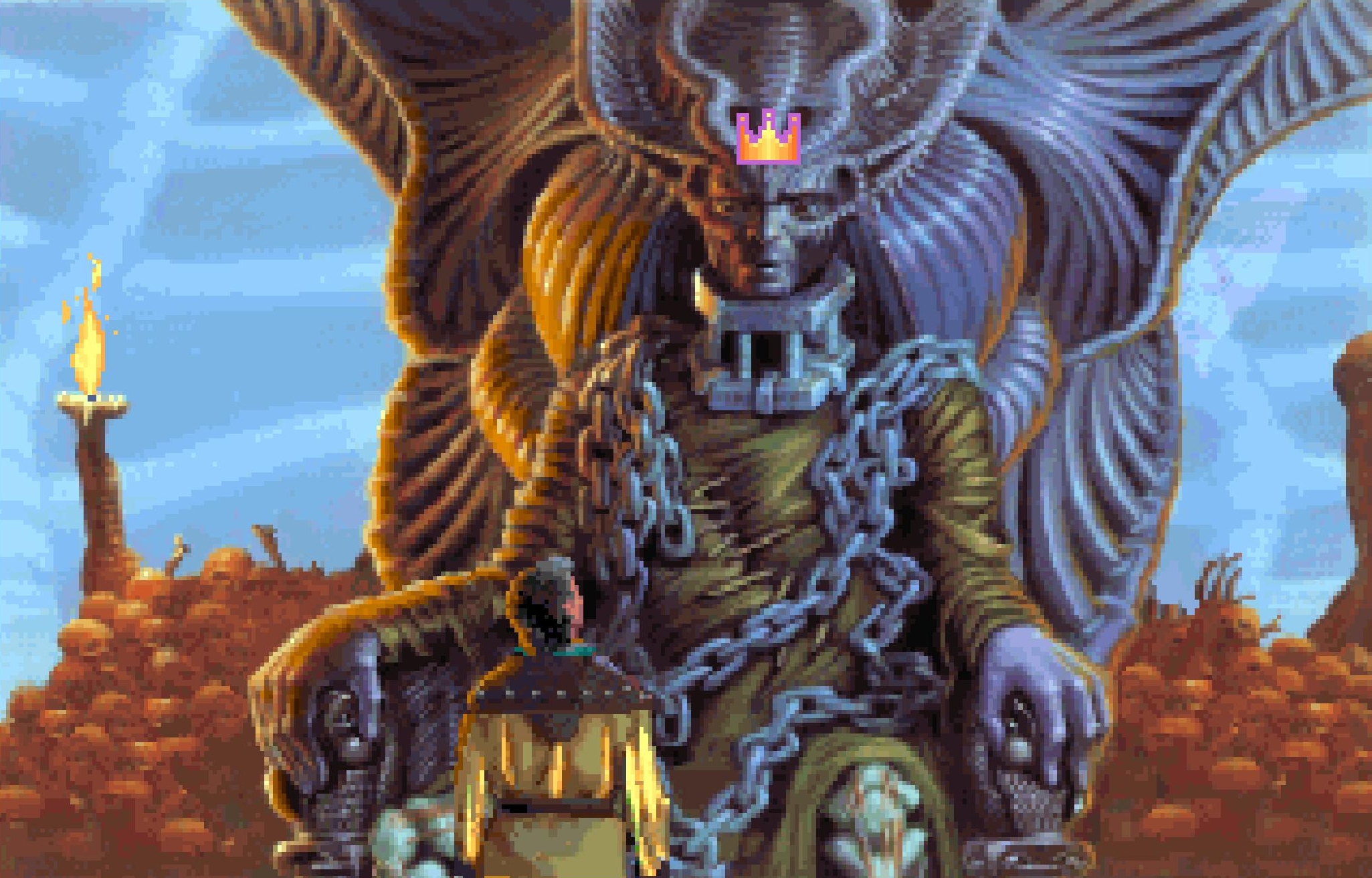 Yet, there's something distinctive about KQ6 that deserves highlighting, and I can only assume it's the influence of Jane Jensen. It's the bit where the game switches from being a hapless-go-lucky fairytale, to some Giger-esque horror movie set in the very bowels of hell.

There are two endings to King's Quest VI, you see. There's one that involves dressing Alexander up as a lady to sneak into the castle, tricking guards with a noisy toy nightingale, and defeating a genie with a mint. Or there's the one where you begin by confronting Death himself with the eternal gruelling awfulness of his own immortality, driving him to a mental breakdown. You know, one of those two.

It really is quite the thing. The tonal shift is just crazy, to the point where the banal triviality took on such a dark edge that I stopped playing it with my five-year-old in the room. There was nothing profound, nothing worthy of celebration, but just relentlessly bleak death talk. If only the game had a scrap of wit about it (puns don't count, Richard), there would at least have been a reaction from the nebbish Alexander that he wasn't in Oz any more. Instead, of course, he carries on colourlessly drooping around, until the rescued Cassima inexplicably agrees to marry him, and it all ends vapidly ever after. 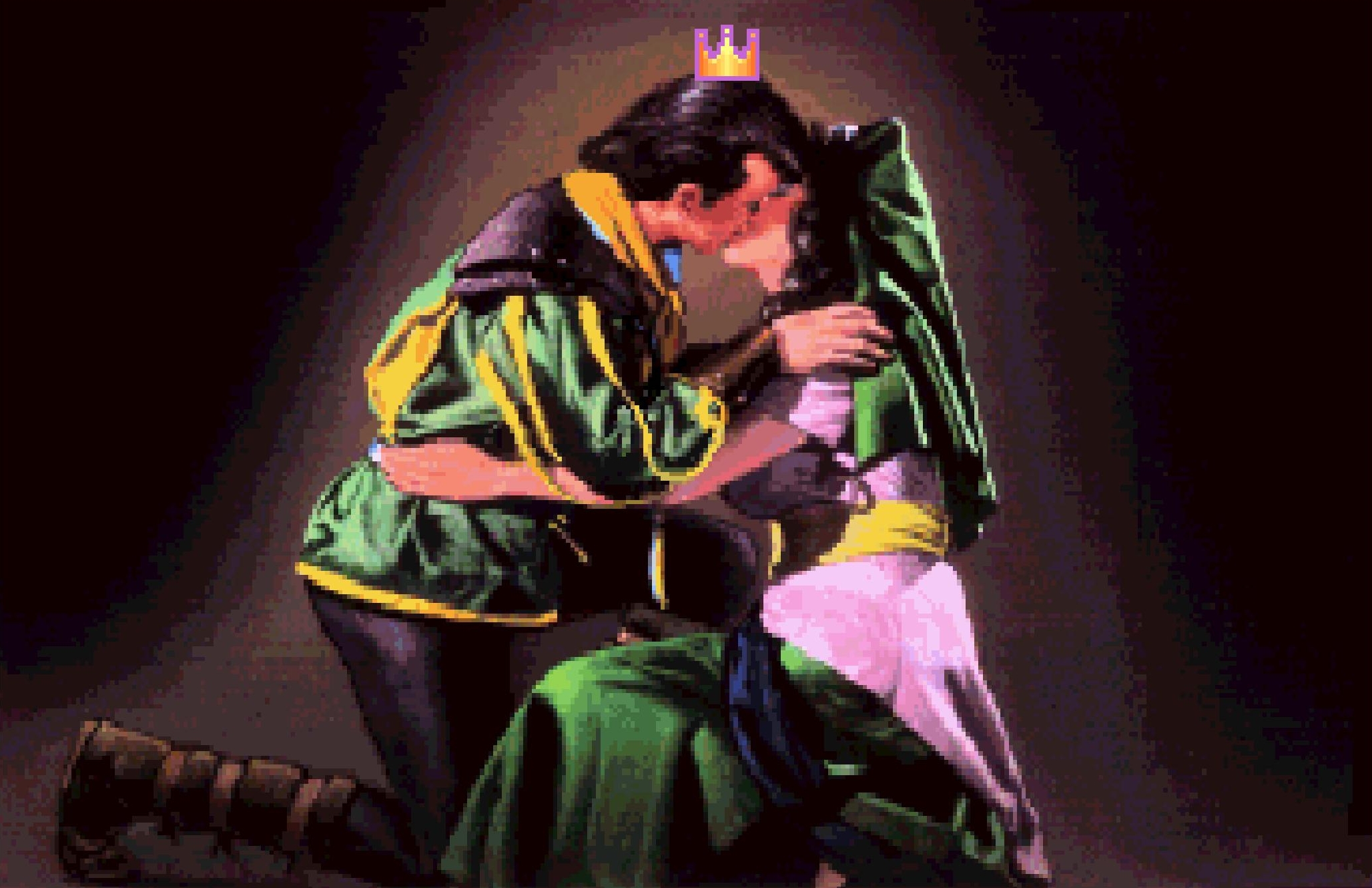 So that's your best King's Quest, is it? Well then. I'll just be here, being right. Take THAT, Steam forum people from five years ago who were mean about me.

I really don't think so. KQ6 is certainly interesting for its tonal plunge in one of the two endings, but it's a terribly constructed game. Much better to get Space Quest IV, which at least is incredibly funny while making the same mistakes.