If you click on a link and make a purchase we may receive a small commission. Read our editorial policy.
Legends Of Runeterra review
A strategy card game that's loaded with charm, even if it isn't packed with interesting decisions.

"Games are a series of interesting decisions". That Sid Meier quote has been floating around for nearly a decade, and writing it out nowadays can seem pat. "Of course they are!", you might say, or possibly "of course they're not!". Personally, I find it a helpful way of thinking about why I enjoy most of the games I play. Generally speaking, the more interesting the decisions, and the more densely they're packed together, the more I enjoy myself.

It's a bit weird, then, that I'm still enjoying Legends Of Runeterra quite a lot, despite many of my matches containing very few interesting decisions at all.

If you've played Hearthstone or Magic The Gathering, you will find Runeterra deeply familiar - and if you've played League Of Legends, you'll recognise the characters. You're playing cards with the goal of destroying your opponent's Nexus. Every turn, one person attacks while the other defends, and the defending player gets to choose which of their units they're going to block with. It's all about engineering favourable trades, through playing the right units or casting the right spells. Once you get comfortable, with the game and with your decks, those decisions are usually pretty simple.

Right. You'll have to bear with me while things get fiddly, because "simple" isn't quite the right word (except for when it is). It's also important to bear in mind that this is my perspective after playing for dozens of hours. A beginner's experience is better reflected here, though note that piece is a little out of date, as nowadays the game's much more generous with handing out cards and Expedition tokens.

What do you mean, "control" deck?

In multiplayer card games, your deck should always be built around one of three established routes to victory. Your goal is either to survive until you can overwhelm your opponent with powerful late-game effects, kill your opponent super early, or thread the middleground and knock them out in the mid-game. Varied and evolving deck matchups are a large part of why people play these type of games for a long time, and that's largely true of Runeterra.

In some games, my decks play themselves. My favourite, at the moment, is a control deck that revolves around summoning sea monsters that get much more powerful once I've burned through half my cards.

I'd say around half of my games with that deck are ones where I don't really need to think. I tend to either have a unit that can survive a few attacks, or a spell that efficiently wipes out an enemy or two. I don't need to agonise between options, because the best option is immediately apparent. 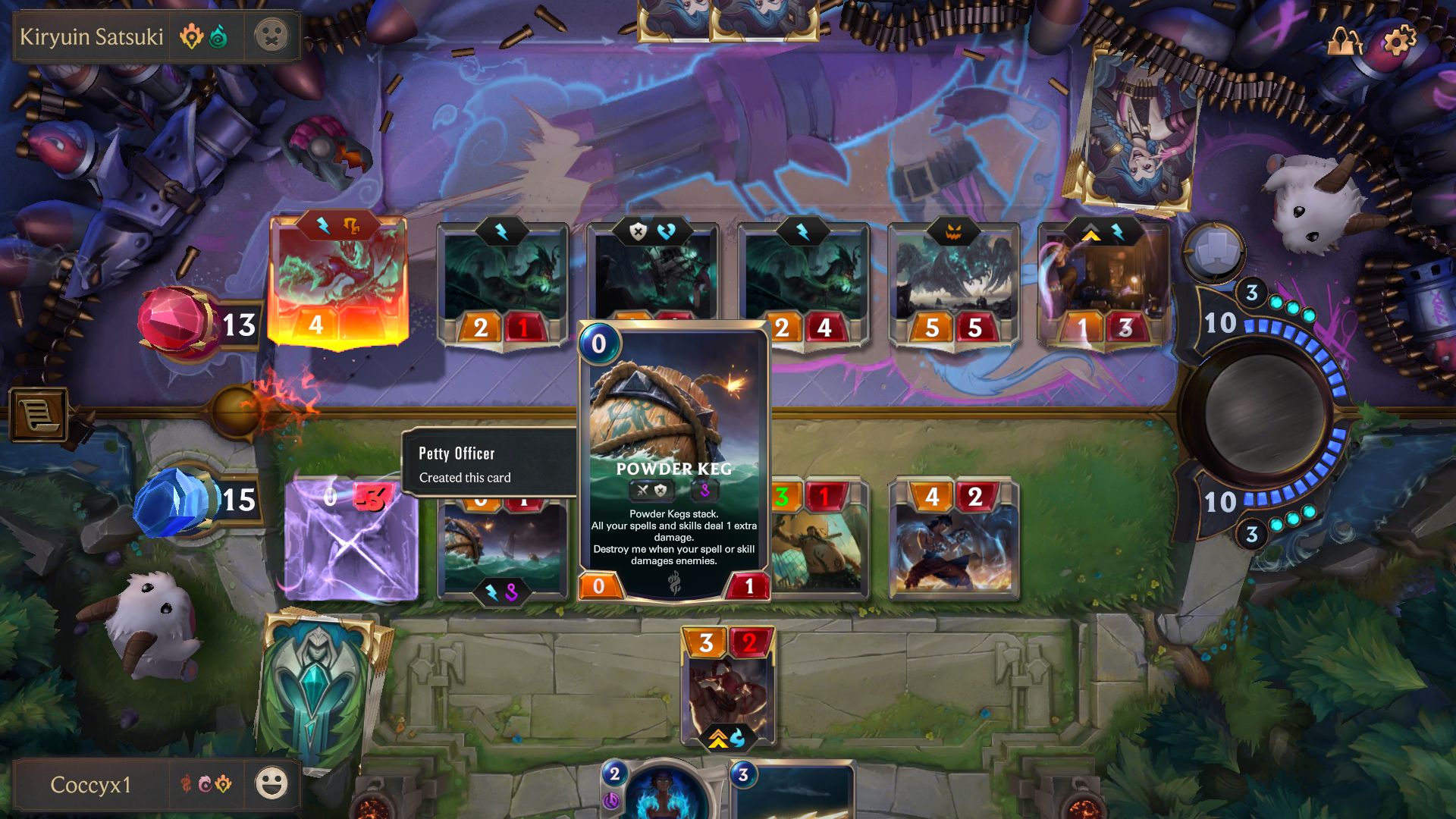 In the other half of my games, the best option isn't always obvious, but I can still arrive at it fairly easily. It's complicated in the sense that there can be a lot of variables to consider at once, but simple in the sense that once I start thinking about those variables, the right course of action is clear. I wind up having to put thought into what to do, but I don't normally wind up having to think very hard. It's like snacking on beef jerky. Those decisions might be chewy, but they're too easy to be interesting.

Example time! Take a look a this screenshot. 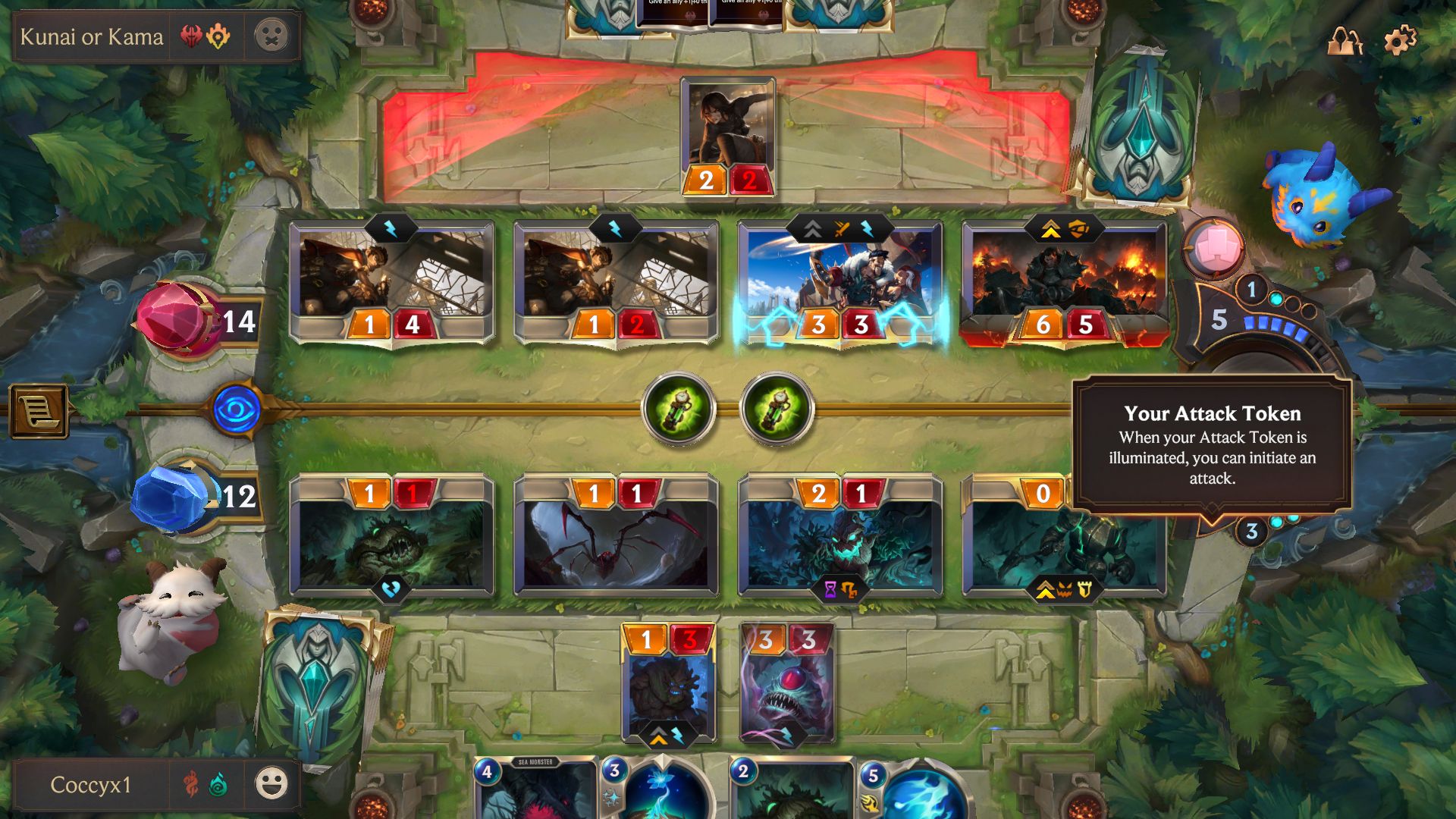 Cor, that's a lot going on. I'm being attacked, and each of my opponent's units can do something special. From left to right, two of them summon a skill that does two points of damage to my nexus, one can attack my blocker before the blocker gets to strike back, and the last one deals excess attack damage to my nexus. Fortunately, my units are even specialer.

When my Thorny Toad on the left dies, it triggers its "Last Breath" effect. This particular toad destroys two cards from my deck, which is a good thing because that trims my deck down to 15 cards, plunging me into "Deep" mode. I've got a Champion on the board, which are extra powerful cards that level up once you meet their conditions. His name is Nautilus, and you can just see him on the right. The condition for Nautilus is to enter Deep mode, so because combat happens left to right, by the time he's ready to whack that Darius he'll have 12 attack rather than 0. Hurray! 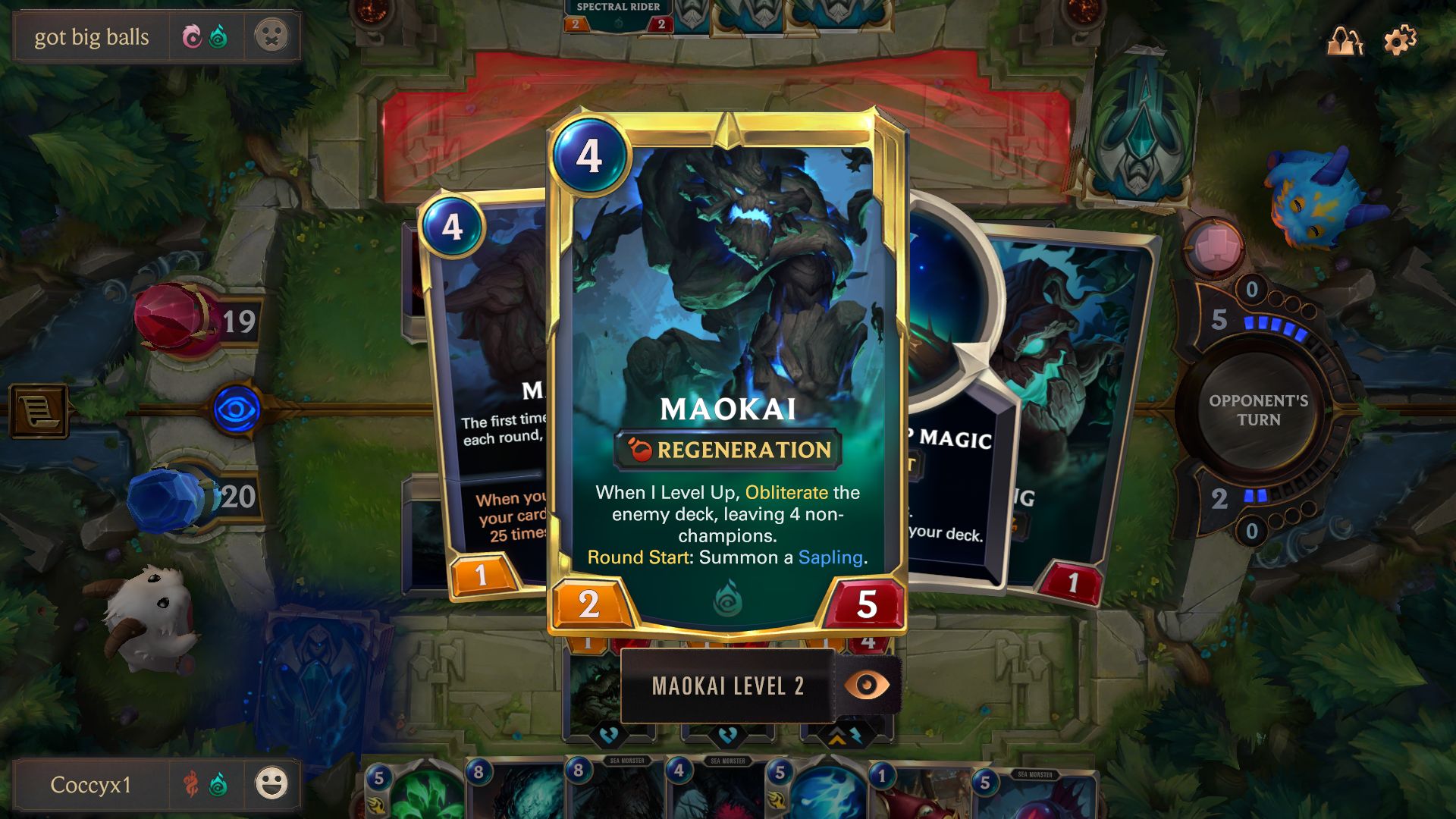 I would have won anyway, mind, because I've pinched this deck from the internet, and it is too good. Worse, even in the rare cases where a nuance like that tips the balance, I never feel especially clever. Playing well is about noticing things and doing good wizard accounting, rather than being creative or anticipating your opponent's actions. I'm more engaged when I play with less powerful decks, where I don't have so many cards that are great in almost any situation - but the problem's more fundamental than that.

At its core, Runeterra simply doesn't support the kind of mind games that make the best card 'em ups so exciting. I'm thinking about Artifact, where deploying heroes and focusing your forces in different areas creates this rich mental back and forth, where you're trying to wriggle into your opponent's plans and trump them with your own. I'm thinking about Android Netrunner, a physical card game where one player tries to lead their opponent into traps and blind alleys, while the other attempts to see through their deceptions. Runeterra is just, substantively, a very different proposition. A drier one. 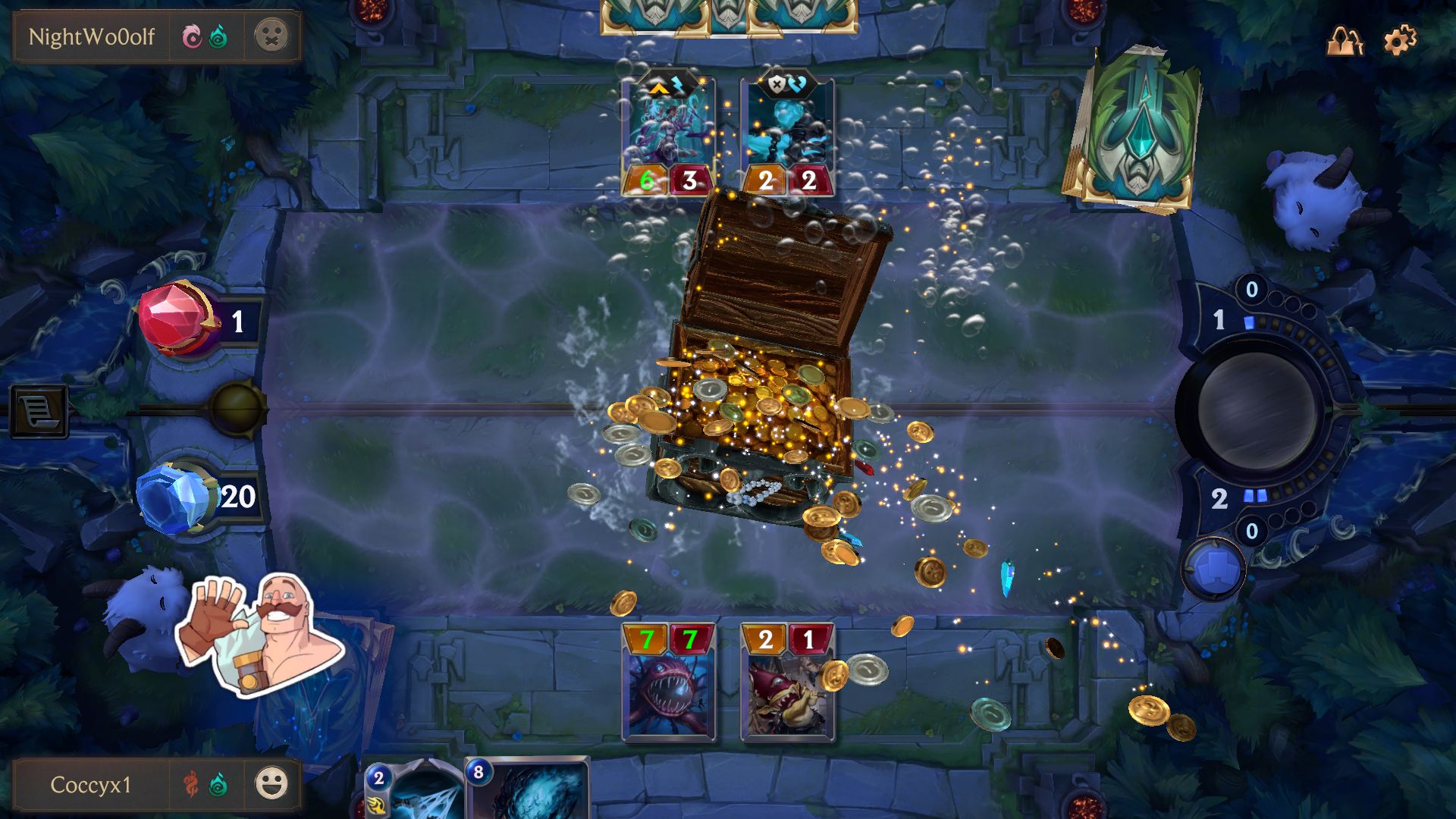 Nowadays, I treat Runeterra a bit like a multiplayer version of Slay The Spire. I get the same satisfaction from spinning my cogs, then watching them grind up against other people's. In some ways, it's more like watching a movie than playing a game. It's as if I'm not the prime participant, but I still have to be attentive. It occupies me without draining me, and it's an ideal game to play while checking out my Discover Weekly Spotify playlist.

It's got flare, which helps. Powerful abilities swamp the board in special animations, like the alligator that bombards the board with cannon shots. Or the massive sea serpent that shuffles treasure cards into my deck, then spills gold across my screen when I draw one. There are so many cards that ooze personality, with abilities that resonate with their identity. Take a card like "Chum In The Waters", which lets me target an enemy unit with a very damaging, very low-health shark. Or the Puffcap Peddler, who stuffs their opponent's deck with poisonous mushrooms that deal damage when drawn.

They're the most impressive part of Runeterra. Other card games might ask me to think more deeply, but I've never felt attached to individual cards as characters. These are vibrant, charming and inventive. They pull me out of the abstract, breathing life into the Numberwang. Getting me to treat drawing cards from my deck as a metaphor for pulling monsters out of the sea is, frankly, inspired. 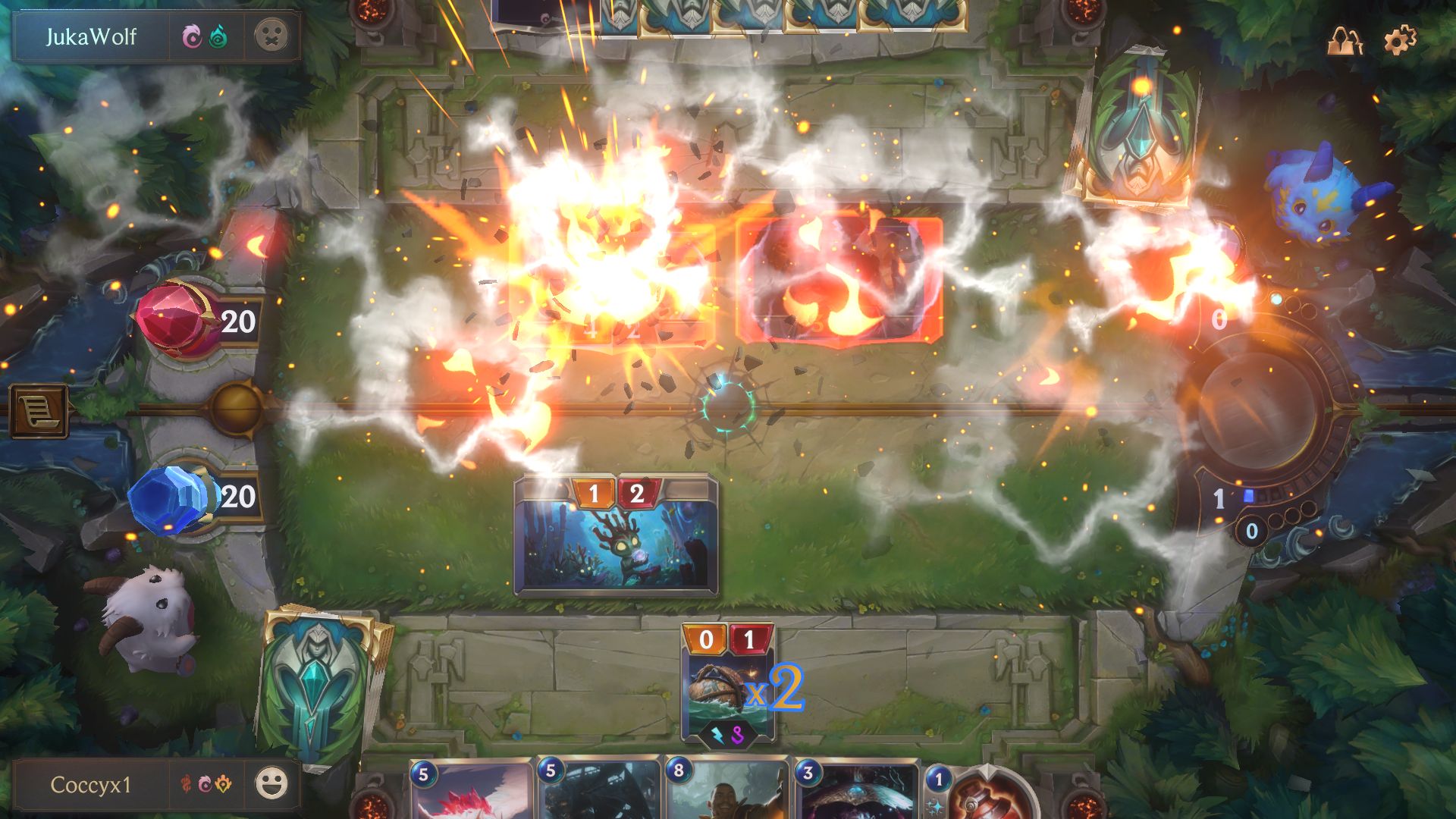 The second most impressive part of Runeterra is its generosity. I've built up a sizeable collection just by playing a couple of games a day, and I've never felt like I needed to grind for competitive cards. There are three big reasons behind that. You can choose which faction you want to unlock cards from as you play, so it's easy to work towards specific decks. Some of the rewards you get are "Wildcards", which you can use to generate any card of the appropriate rarity when deck-building. You also always get a hefty dose of new cards every week in your Weekly Vault, which dishes out more rewards the more you play.

I've mostly talked about Constructed play, where you fight with pre-prepared decks. Expedition Mode is even better, because it's not dominated by super-powerful decks that people have copied from the internet. It's similar to Hearthstone's Gauntlets, where you draft a deck from a series of choices then go up against people who've done the same. You're trying to win seven games, and get knocked out if you lose two games in a row. That's where I have to think the hardest, when I'm weighing up synergies and mana curves and strategies. 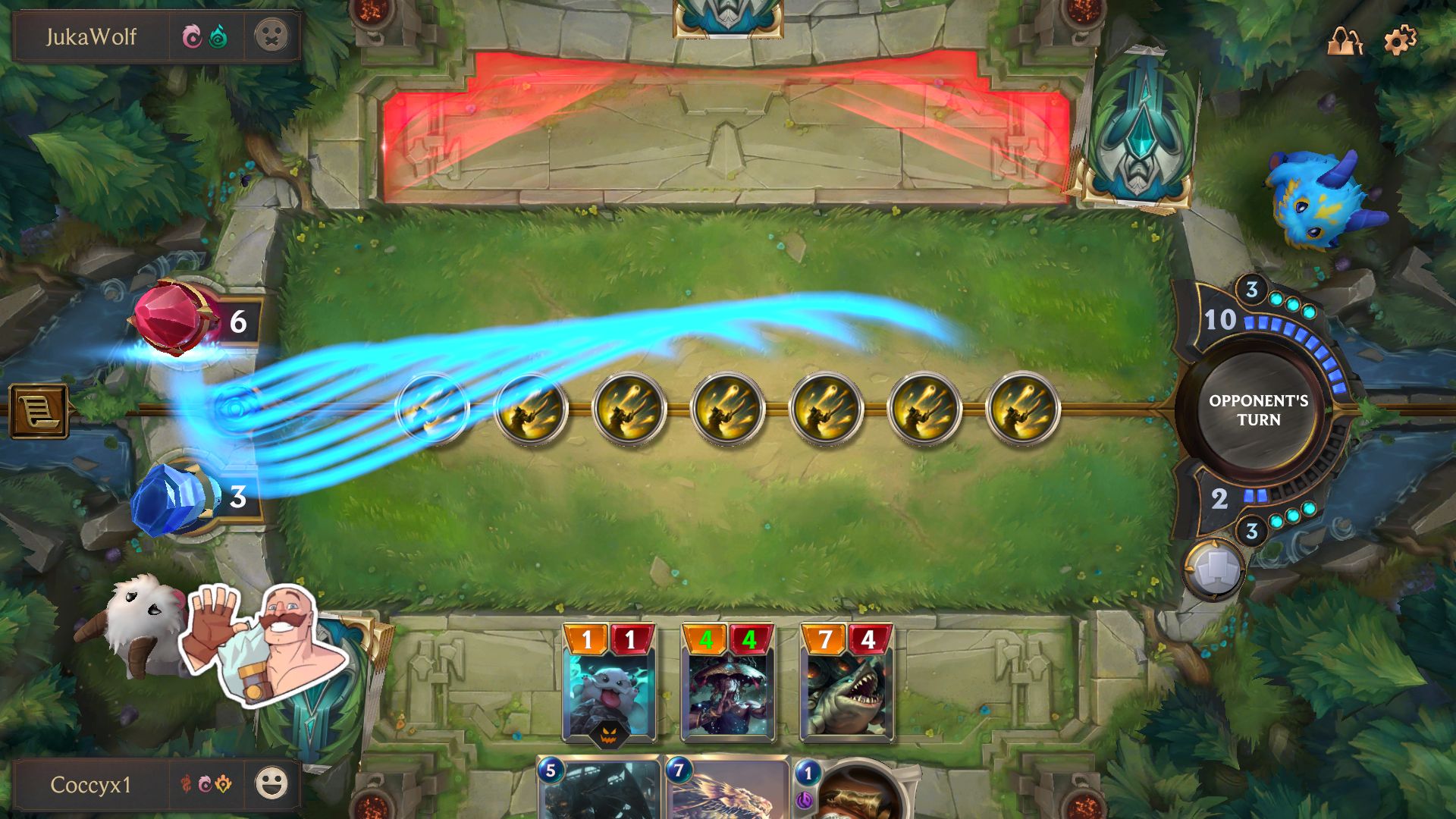 Cleverly, and unlike every equivalent mode I've seen, you get to keep refining that deck once you start playing with it. You're presented with opportunities to add new cards and swap old ones out, which get you to dig down into what's working and what isn't. Although, that said, it is a shame that some of the fruitier cards don't work very well, because they're so dependent on each other. The most solid Expedition strategies usually revolve around filling the board with simple, beefy units.

None of this is exciting. I see Runeterra as a pleasant place for my mind to wander, rather than a battlefield to be conquered. It's a game for winding down when others wind me up. My relationship with it waxes and wanes, but I know I'll be back for every significant update. Some of the best ideas came with a recent batch of new cards, which bodes well for the future.

Runeterra might not be packed with interesting decisions, but it is loaded with charm. It's nice. It's soothing. That's enough.