Been a while since we heard from Metal Gear Survive, Konami's co-op focused Metal Gear V spinoff. It was originally slated for a 2017 launch, Konami fell silent while estranged series director Hideo Kojima started his own independent studio, which I'm still half-convinced is just an excuse to hang out with Norman Reedus and Mads Mikkelsen

While perhaps a little late to cash in on the Zombie Survival Sandbox zeitgeist, Metal Gear Survive is alive and kicking, or at least slowly shambling closer. Today, Konami announced a release date for the game (February 20th - 22nd in Europe), along with a handful of perks for those bold enough to preorder. After the jump: details, and 15 minutes of (subtitled) Japanese gameplay footage.

Make sure you hit the Closed Caption button on this one, unless you speak fluent Japanese.

Set in a corny What If scenario branching off from Metal Gear Solid 5, Survive sees a bunch of Big Boss' soldiers sucked through a dimensional rift to a parallel world of crystalline zombie-things. While the core of the game seems largely unchanged from The Phantom Pain's sandbox, there are a few additional systems, such as a locational damage/healing system as in MGS 3, and basic real-time construction features to defend your camp from the NotZombies.

I must admit that I quite want to try this - Metal Gear Solid V was a great game and this seems to be a glorified co-op mod for it, recycling and re purposing most of the assets from both the offline and competitive multiplayer sides. It may not have Kojima's free-wheeling sense of fun, but the fact that Survive is built on top of such a solid game gives it a good foundation.

One thing I can't really get behind is their choice to blanket the world in thick fog. A regular source of joy in The Phantom Pain was in finding a high vantage point and planning an entire operation from there. Then again, some screenshots on the official site do show clearer environments, with view distances closer to what Phantom Pain fans are accustomed to. 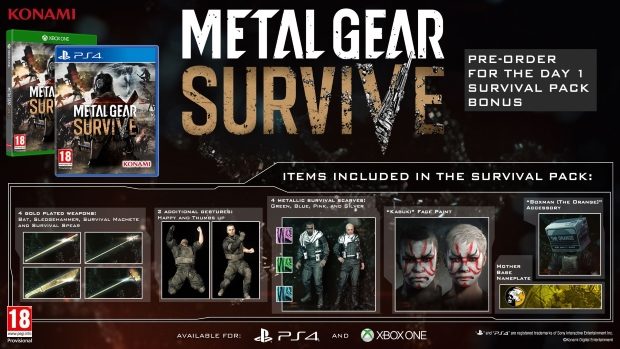 As mentioned, there are a few perks for preordering, but from the looks of it, they're minor cosmetic items; shiny golden weapons skins, a pair of emotes and a handful of character customisation options, such as kabuki face-paint and a small cardboard box to wear over your head while you hide in other, larger cardboard boxes.

Metal Gear Survive is coming to consoles and PC on February 20th. 22nd for Europe. Let's hope Konami aren't daft enough to try to enforce the region lockout on Steam. No prices have been announced.