If you click on a link and make a purchase we may receive a small commission. Read our editorial policy.
Developer: Triternion
Publisher: Triternion

I'm in love with Mordhau.

If I described it as “Chivalry, but there's a button to hold your sword wrong”, I would be both accurate and unjustly reductive. I'd also be giving it a huge compliment, because before last Monday Chivalry was the best multiplayer sword ‘em up in existence. Now Mordhau isn't just that. It's one of the best games in existence, full stop.

Oh God, what a claim. Now you'll be reading this through your “come on now” spectacles, and the best way of fighting through your very reasonable scepticism is to talk more about love. I know!

I immediately regret my decision, etc, except: I don't. I'm in love with Mordhau, despite some parts of it being absolute bullshit. That's often how loves works, and we’ll get to that. But first I'm going to wax lyrical about swords.

At its core lies a combat system that blows previous attempts at first-person brawling out of the blood-stained water. That's especially impressive considering the war elephant in the room, which yes, I realise I have already mentioned. So many of my thoughts about Mordhau follow the lines of "this is Chivalry but better". Chivalry, but more so. 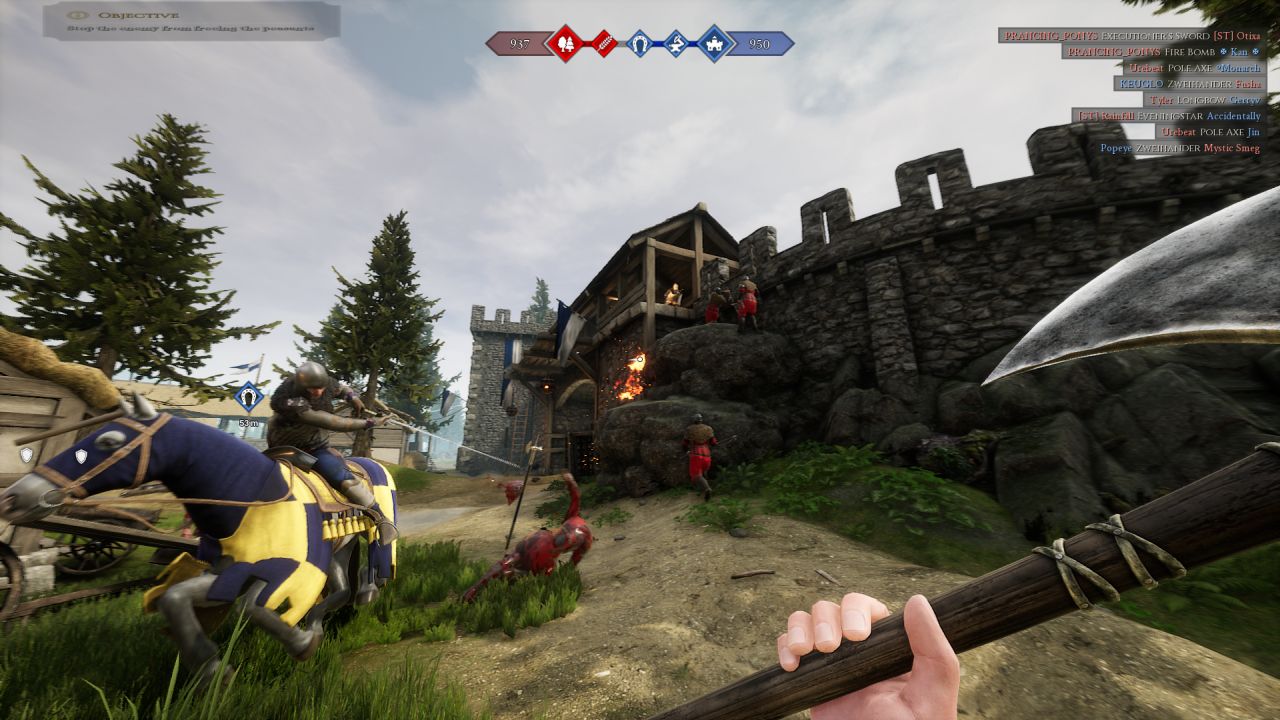 Fighting is about intricate timing, footwork, psychology. It's about remembering and mastering the dozens of different methods by which you might land a blow, then combining them in unpredictable ways. That might mean pressing right click to parry, just as an enemy swings his axe at your head. Or waiting for the foe to come close and scrolling your mouse wheel up for a sneaky thrusting stab of the spear. Or kicking them to interrupt their shield. Every move has its counter. That means thinking as much about your opponent's mind as their pointy stick.

It's why I first gravitated towards duelling, and to some extent why you should too, at least at first. While the lack of an official duelling mode is perplexing, there are plenty of deathmatch servers with duel in the name, often affixed to words like "full honor" or "bigots/assholes get the ban". From those spaces emerges behaviour I adore: frolicking and taunting and decapitated minstrels (more on those shortly). People roleplay as gnomes and referees. The first social norm I enjoyed, though, was how nobody but those assholes will attack before you use an emote to flourish your weapon. Then it's on.

You swing, you stab, you block. You take a beat, then grin as your next whack hits. Your opponent strikes back, a horizontal slash morphed into a thrust. You're ready. You mirror his attack at just the right moment, your sword sparking across his and towards his chest, a deadly deflection. Almost. He parries, dodges backwards, waits for your next move. He doesn't wait long. You start an overhead attack that you know will never land - 'cus that's the plan. It's a feint. He falls for it, then to the ground, while his head rolls off a nearby cliff. 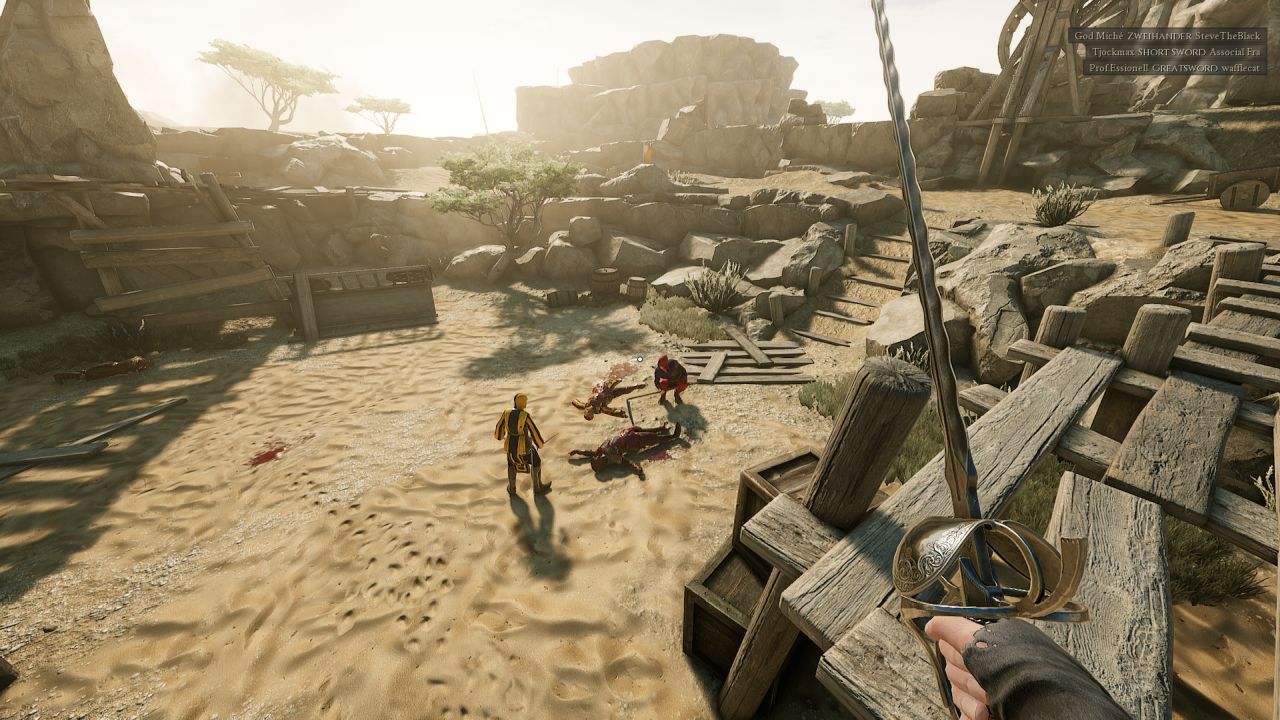 My friend Robin describes feinting as "the least satisfying clever way to kill someone". He's right, but therein lies Mordhau's beauty. It still feels fantastic. That last paragraph barely scratches the surface of moves I know, and I'd be surprised if I don't discover more. One of Mordhau's many joys, I've found, is sharing techniques with your friends. The space for playstyles and personalities to emerge covers acres, both within a fight and the battlefield more broadly. This is central to my affection: who am I to say where Mordhau's beauty lies? It contains multitudes.

By battlefields, I mean the 64-player clashes on show in the "Frontlines" mode. I kind of hated them, at first. They're slaughter zones, hellscapes where much of that intricacy gets soaked up in inevitably messy melees. You'll often just chop at people's bottoms. You'll randomly explode, by way of ballista. Maybe you'll hate it, too.

It'll grow on you. What Frontline lacks in purity, it makes up for in spectacle. There is something about seeing hordes of bellowing knights and knaves that warms the cockles of my heart, then sets it ablaze when I wade in myself. You're less helpless than you seem, you see. 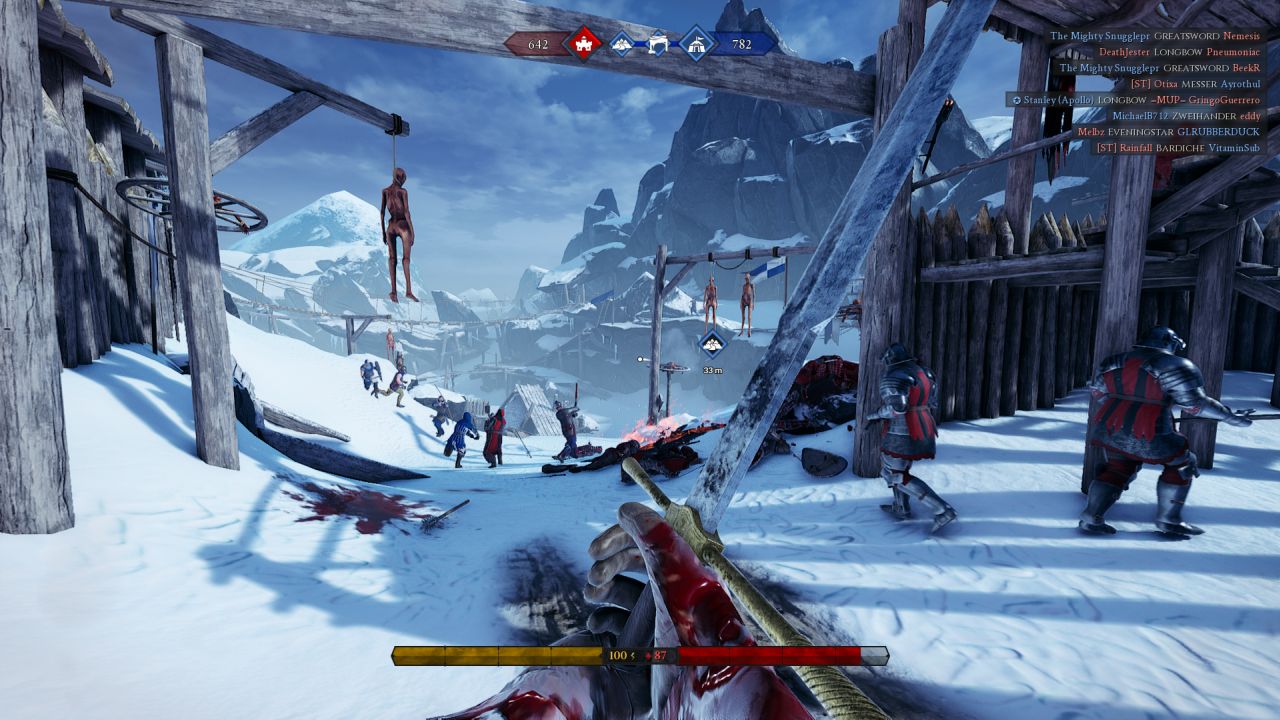 Crucially, while that spectacle brushes up against (capital B) Battlefield's, it never produces the same ennui. When I wrote about Battlefield V last year, I felt a bit smug about the (very smug) line "insignificance is an intractable part of spectacle". Mordhau has gone and proven me wrong, by letting me ride around on a horse plunging a lance into torso after torso after torso. My friends and I have independently commented on how harrowing it is to watch your buddy get beheaded by a horseman.

Even sans horse, fights where you're outnumbered are remarkably survivable. I know because at least three of my troupe have also remarked on that. It's partly because foes tend not to treat those situations as proper fights, swinging wildly, not anticipating well-timed counters. I once snuck behind enemy lines, cut down two people from behind, killed a third while fending off blows from his friends, then ran back into the stairwell I'd sprung from. They followed, and I managed to dispatch both by swapping to a shortshord while their sweeping two-handed attacks pinged against the walls. Daredevil would have been proud.

Another part of the reason I can (sometimes) pull stunts like that is because I've come from Chivalry. You can tell who has: they're the ones dragging their mouse about in fiendish ways that delay their swings. But I know Brendy has also enjoyed great success with a shield, indisputably contributing by keeping three enemies busy at once. That's nice, because Brendy usually likes to (more disputably) contribute by coating as much of the battlefield as possible in fire. 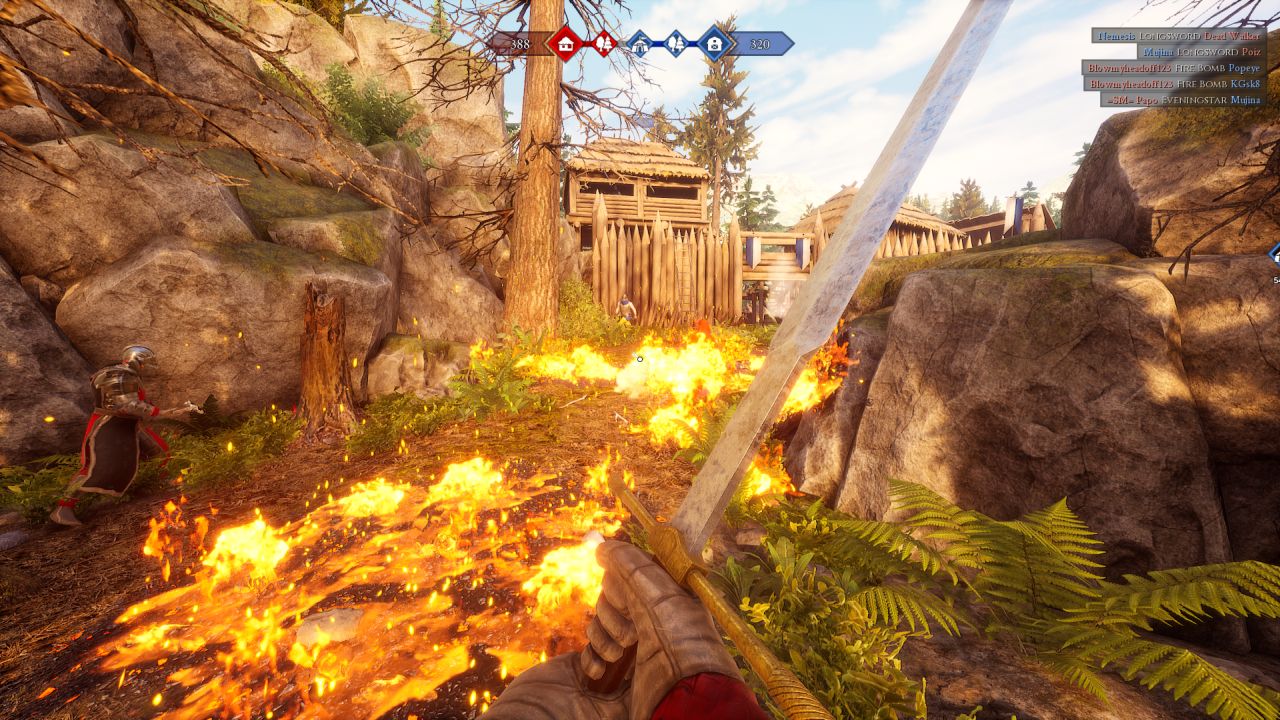 I don't hold it against him. I mentioned how personalities emerge, and key to that is the array of toys Mordhau pushes into your hands. There's a deep customisation system that, while woefully never explained, lets you charge into battle with any combination of perks, armour, weapons and tools that take your fancy, so long as you don't spend more than 16 points. They're weighted based on impact: a dagger costs one, the Zweihander ten. Me and Robin have taken to spending all our points on powerful perks, primarily a dash-type-dodge we now both find indispensable, and a perk that heals with each kill.

That means we can only start with widdle swords, but that's fine because bigger ones can be picked up from slain combatants. We also scavenge for spears, halberds, axes and bows. Yes, there are bows. Yes, they are infuriating and if you use them you are a bad person. 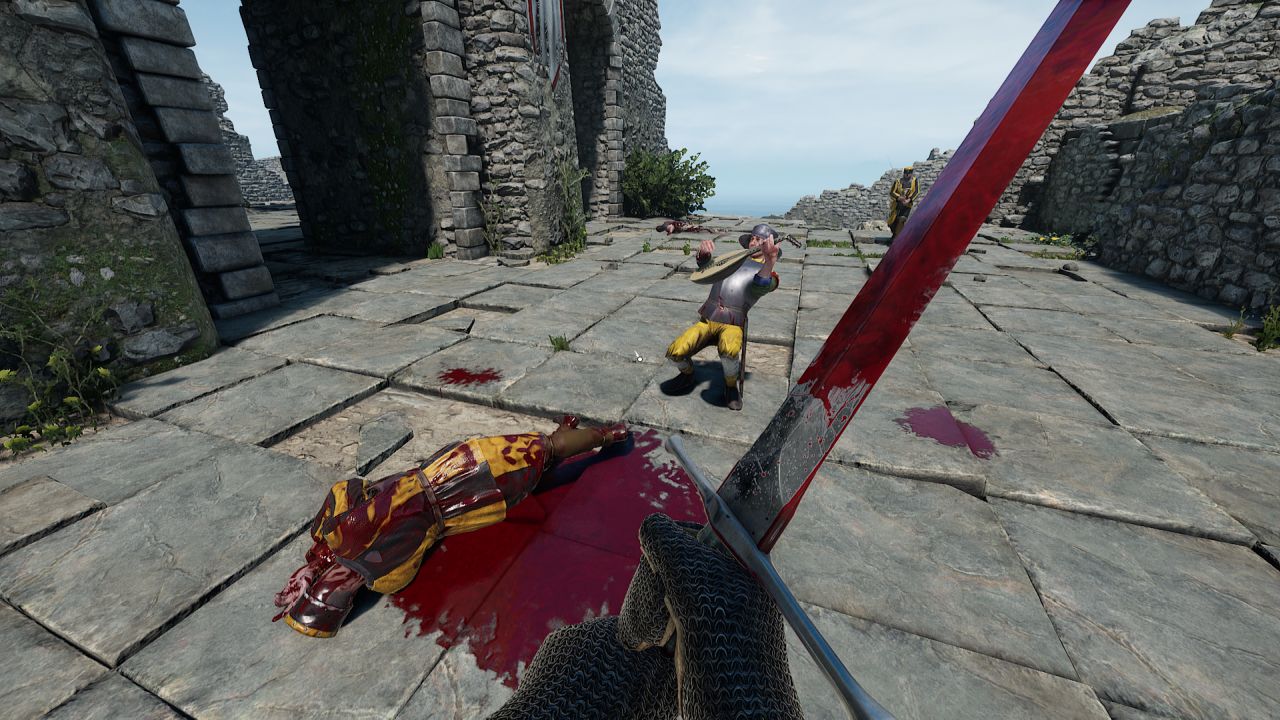 Robin also takes great pleasure in prancing around as a bard, luring people away with his lute like the Pied Piper of gruesome medieval war. He's convinced that enough enemies stop fighting and use emotes to dance around him that it's a genuinely effective battle tactic. I love that he is probably right. Again.

Another friend, Dan, sometimes chooses to eschew weapons entirely. He slaps on the toughest armour and the biggest shield, then specialises in protection. He dislikes duels to the point where he'll run away from them, instead running after allies who would otherwise die. "It feels wholesome", he told us. A second later, a random teammate kicked him into a ravine.

I haven't mentioned that it's hilarious. Even on my own, I find myself chuckling aloud every few minutes, and grinning almost constantly. It is perfect slapstick. I've howled as a cornered man's corpse went ragdolling out of a window, and cackled as the closely timed sword swings of two people first decapitated a foe, then sent his head hurtling into a river. On one occasion, after a panicked retreat from six burly boys who backed me into a corner, they all abandoned their swords and started kicking me. I have never laughed for as long or as hard at a videogame.

I should mention, briefly, that Mordhau's other modes haven't captured my attention in the same way. The battle royale mode sounded great on parchment: a slower, measured last knight standing arena that does provide a tension the other modes lack. I can see some great "and then I killed the last guy with a rusty spade" type stories coming out of it, but it's a tad too unfair and the maps are a bit too big for it to be worth bothering with, for now. I haven't played much of the co-op vs AI "Horde" mode, after dipping in to see people using cheeky rock positions to chop through their assailants with ease. It probably wouldn't be my bag anyway, to be honest.

Let's get back to the good stuff.

What do you do, as a reviewer, when a game facilitates friendship? In the broad, important ways, at least. On a more literal front, the game is in dire, dire need of something that marks your Steam buddies out from the riff raff during its busy battles.

I'm lucky enough to have a group that approaches Mordhau with an ideal combination of creative whimsy and determination. You might not, and the sheer fact that I've brought them up so much demonstrates how integral they are to reaching those peaks of unbridled joy. They're a large part of why I'm so keen to climb more.

This is probably one of those times when it's best to just hold your hands up and go “look at those hands, I am but flesh”. I honestly don’t know to what extent I can untangle my love for the game with my fondness for my friends. I can tell you some more facts, though. 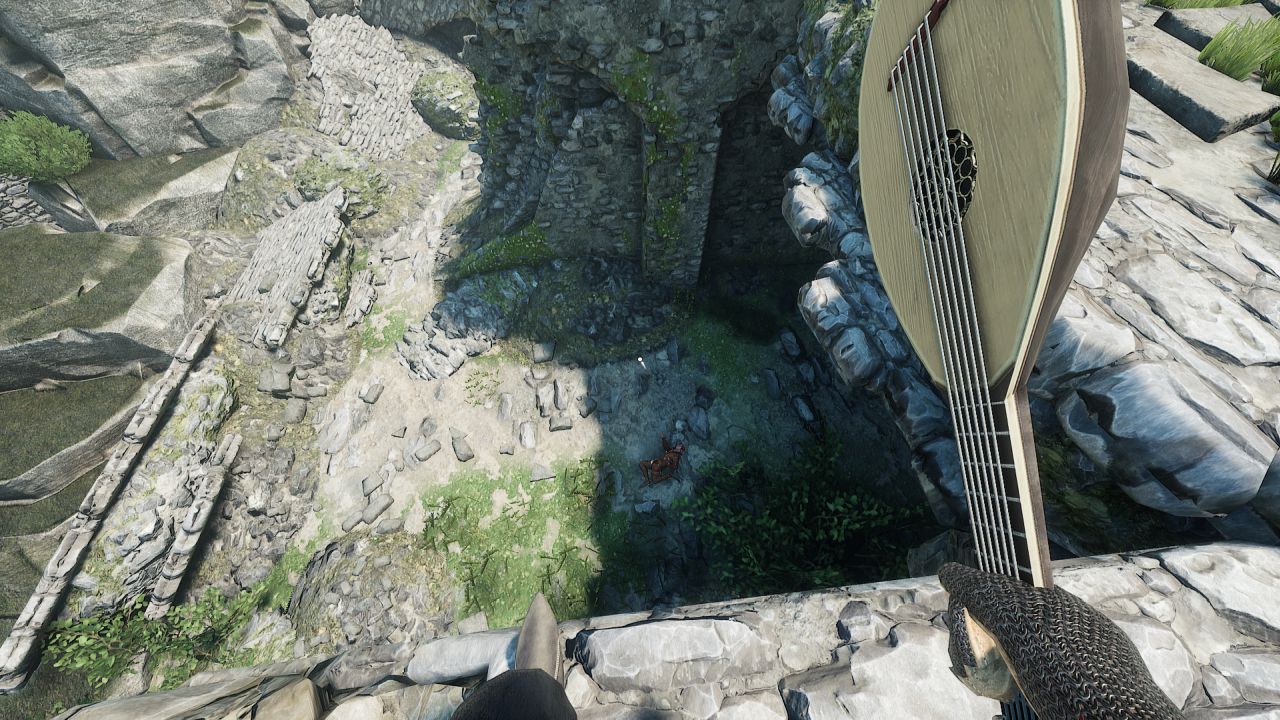 I wrote part of this review in my bed at 5am in the morning, because I couldn't stop thinking about it. Love can be unhealthy. I also dreamed about it, but then again I also recently had a dream where I was fighting Horace the Endless Bear, so maybe let's not read too much into what dreams mean.

Sometimes love means accepting flaws, while still hoping the subject of your affection does their best to improve. It's one of those words you want to be careful with, as a critic and a human. You don't want to dilute its power.

I'm in love with Mordhau.