If you click on a link and make a purchase we may receive a small commission. Read our editorial policy.
Developer: Square Enix, Acquire Corp.
Publisher: Square Enix

As I climbed the steps toward the final, final boss of Octopath Traveler, I knew I was done for. Over the past 80-odd hours, I'd battled my way through this exquisite 3D pixel diorama the only way I knew how: with my three favourite and strongest characters doing most of the heavy-lifting. The fourth and final character in my party was whoever out of the eight-strong cast of do-gooders I happened to be pursuing the story of at that particular moment. Sure, it meant I had a 30-odd level gap between my best and worst fighters, but anything else would have required an excessive, and I really do mean excessive, amount of grinding.

But having endured each of its eight separate character stories, I'd assumed that three Lv.65 warriors and one Lv.50-ish bloke would probably be enough to finally put this game to bed. Then it asked the impossible, bringing everyone into the mix in a way that utterly destroyed any chance I ever had of emerging victorious. And it was at that moment that I thought, "Stuff it. You can have this world, evil menace. I am done."

It wasn't for want of trying, either. I know that grinding up the level ladder is, to an extent, part and parcel of the JRPG's DNA. But Octopath Traveller suffers from such a debilitating mid-to-late game slump that, even if I did have the time to put in another 30-40-odd hours to even stand a chance against that last boss, the foundations that hold up its core levelling system just simply don't run deep enough to support it for that length of time. And I love Octopath Traveller's battle system. I really do. Just not enough to do what it's clearly asking of me.

Even worse, the actual end-game events were entirely of my own making. For Octopath Traveler isn't like your traditional JRPG, where you're constantly working toward defeating an evil, all-consuming power about to take over the world. Oh no. Unless you go looking for it down a particular rabbit hole of sidequests, Octopath Traveler is largely content to amuse itself with just the individual stories of its eight assorted party members - hence the 'octo' bit in the game's title.

They're all pretty typical JRPG characters. You've got: your warrior who's trying to find a reason to wield his sword again after failing to protect his king; a thief who gets his hands caught in the cookie jar and must atone for his crimes; a wholesome cleric who must undergo a pilgrimage and bring hope to the people; a dancer plotting revenge against the men that ruined her life; and an apothecary who sets off to heal the world while searching for the man who saved his life as a child. Then there's the hunter who goes on a quest to save her master, the merchant who dreams of travelling to far-flung places and selling their most exotic treasures, and finally there's the mage-like scholar who uses his Holmesian detective skills to bring down an evil death cult. All right, maybe that last one isn't quite your average JRPG stereotype, but you get the idea.

You can pick whose story you tackle first, too. I went with Olberic the warrior to make sure I always had a good tank at my disposal, but after I'd completed the first of his four story chapters, I was then free to wander around the map at my leisure and go and recruit the rest in any order I liked - and for a good 30 hours or so I was really rather enjoying what the game had to offer. 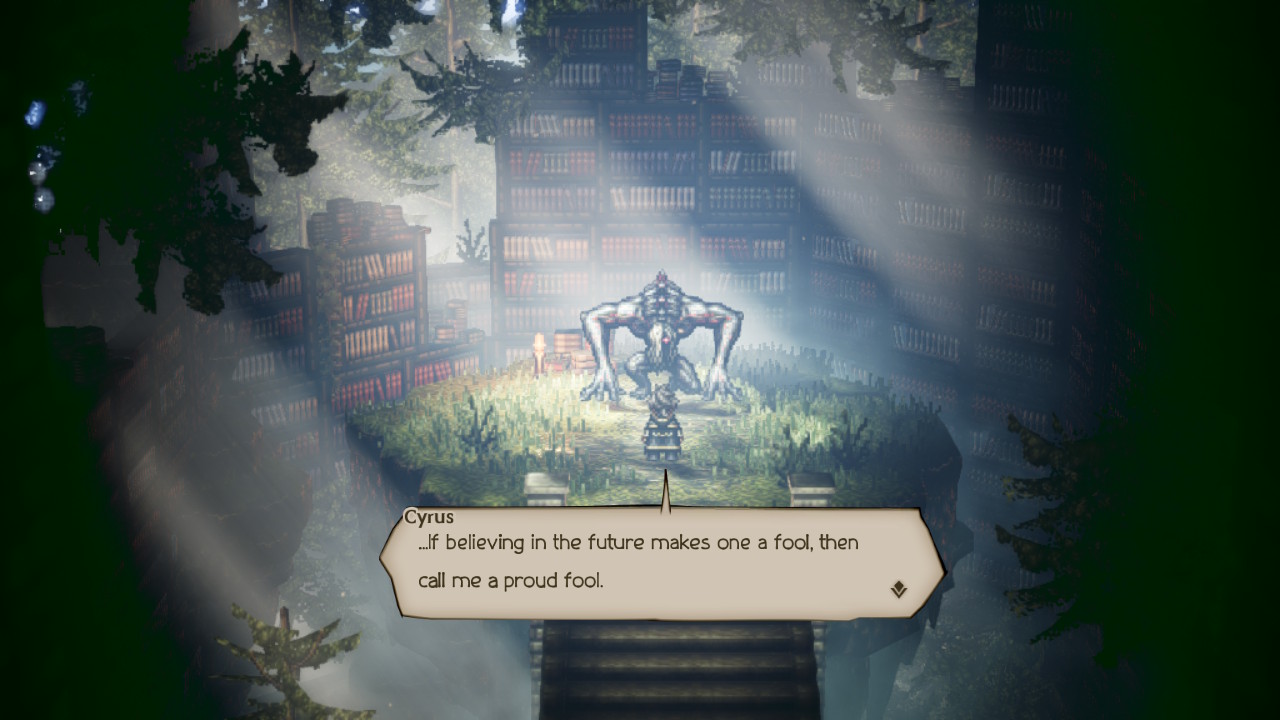 A big part of that is down to its brilliant battle system. Man alive, I love it so much. The music alone deserves chef kiss tier levels of worship, but the way you dance between "breaking" an enemy's defences and "boosting" the number or power of your own attacks to really stick the boot in when they're down has such a satisfying rhythm to it that each encounter is like a living, breathing puzzle.

You see, every enemy is vulnerable to a different clutch of weapons and magic attacks, indicated by a string of tiny little question marks beneath their beautifully detailed sprites. Strike at one of them correctly and the question mark will be filled in, lowering the number on their shield defences by however many times you manage to hit them. Break an enemy completely and they won't be able to attack again for the rest of the turn, or the one after, presenting you with the perfect opportunity to really layer up your boost attacks and hammer these suckers with a truck ton of damage.

Managing your boost points is another part of the puzzle, much like it was in Square Enix's equally excellent Bravely Default series on the Nintendo 3DS, which Octopath's producers worked on previously. There, you could save up turns to use all at once by "defaulting" (i.e: defending) for a bit, or you could "brave" it by dipping into a kind of turn-based overdraft at the expense of not being able to attack again until your BP bar got back in the black.

Here, it's about making sure you build up enough boost points to coincide with when you're about to break your enemy's defences, which I found often meant actually delaying the whole breaking business for a turn so I could max out my golden BP bloops to really lay it on thick in the next one. After all, there's no point breaking an enemy at the very end of a turn once they've already done their attacks, as you'll only get the benefit of their dazed state for a single turn. Break them before they crop up in that turn's battle order, on the other hand, and you'll effectively have the benefit of two free goes to really show them who's boss.

I loved the process of figuring out their weaknesses, too. The question marks always appear in the same order, for example (swords, then spears, then daggers etc), and as you gradually start filling them in it becomes its own kind of sudoku puzzle -- especially when some of the end chapter bosses can change all of their vulnerabilities mid-fight. There's nothing more pleasing than correctly guessing that last line of defence that wins you a life-saving break, and it's one of the few JRPG battle systems where I'd felt like I'd truly mastered each of its individual components.

It makes for some genuinely thrilling combat, but it's a shame that sense of variety doesn't manifest itself in the same way anywhere else. Each character chapter, for instance, begins by arriving at a town. In said town, you'll talk to some key NPCs for a bit, getting your latest bit of exposition dump that sets up that chapter's big boss battle, and then you go to the adjoining dungeon area, be it a forest, mansion, sewer or cave (it's always one of the four) to do some fighting. Beat the boss and the chapter ends. Rinse and repeat four times for all eight characters.

This is the sum total of everything you'll be doing in Octopath Traveler, and a big reason why its mid-to-late-game slump feels so lethargic. No matter which character you're following, every chapter feels like you're spinning the same old wheels again and again, and if you're not really that fussed about the story in question, it can feel doubly tiresome. I couldn't care less about Tressa's yearning to find the perfect merchant ethos, for example, and Primrose's quest for revenge against the men that killed her father felt like a story I'd heard a dozen times before.

Scholar man Cyrus added a bit of spice to the story with his weird death cult plot, even if he himself was so achingly posh that I sort of hated him at the same time, and the holier-than-thou Ophelia and her pilgrimage to rekindle the world's sacred flame was sweet in places but also ended up falling a bit flat for me.

Olberic and Therion had some pretty good yarns, the former channelling an all too familiar 'what the hell am I going to do with my life?' kind of energy, while the latter ends up using his thieving skills for good in order to learn some valuable life lessons. I was also very onboard with happy-go-lucky Alfyn's philosophy of just adding a bit of extra kindness to the world, and hunting down a legendary beast with H'aanit felt like one of those early first acts from a Final Fantasy game -- although you'll probably want to switch to the Japanese voiceover for her bits because honestly just look at the state of this ye olde dialogue she's been given:

Even if you end up liking more stories than I did, though, there's a deeper problem with Octopath Traveler than just mere repetition. Every chapter has a recommended level attached to it, you see, which is roughly in line with the ferocity of its accompanying monsters. That would be fine if a) all your characters stuck on your bench levelled up alongside the ones in your main party and b) its plentiful supply of sidequests rewarded you with extra experience points to help make up any shortfall.

But neither of those things happen in Octopath Traveler. Sidequests only reward you with money and inventory items (some, admittedly, do involve a few fights, but the vast majority are all extended fetch quests), and the only way I was ever able to hit the recommended level cap without resorting to endless, mind-numbing grinding was by adopting the strategy I outlined at the start: stick with three mains and rotate the fourth. It would take literal years to try and keep everyone at the same level. You can't even remove the very first character you chose at the start until you've finished their entire storyline.

It's so frustrating, because there are so many things I love about Octopath Traveler in spite of its many, and really quite crippling flaws. The music is just divine, the battle system is up there with the very best of the genre, and I'm both bemused and astounded by the level of detail Square Enix and fellow developers Acquire have put into all the backstories of the NPCs. It's nuts! Half the time they're more interesting than the main heroes.

I just wish it was better structured to deliver that conclusion without collapsing on itself at the last hurdle. Because there are hints of something wider at play here. It just does a terrible job of pulling it all together, which can leave Octopath Traveler feeling like a big old anticlimax. I both love it and hate it in equal measure, although I must say the PC version's gorgeous 60fps is absolutely to die for after chugging through it on the Switch. It makes me all the more inclined to give it a sort of sneaky thumbs up, but in the end I think even JRPG die hards will find this a bit of a slog. It's definitely a different and interesting take on the genre, but ultimately I fear this will be a path less travelled by those after a stone cold JRPG classic.