I'm still struggling with what, exactly, Humble Originals are meant to be, and I think Humble might be as well. They're only available through Humble's monthly subscription service, and the official gubbins says they're "brand new games" that are "a little risky, a little experimental, and a lot of fun!" In practice, results seem to vary. Sometimes you get solid, polished things, like Wilmot's Warehouse (even though it was significantly different to the version that was released in August), or Hitchhiker. Other times you get a fragment of a hacking game, where people keep their computer passwords on post-it notes in the lavs.

Operator is the latter. I did actually really enjoy Operator -- or rather, I enjoyed the concept of Operator. I think it could be really good, but only if they make it really good.

You're a hacker (and, if the live action bits of the trailer are to be believed, you're one with a really cool beanie hat) who can select jobs from a jobs board. It looks like the idea is for you to be able to take on different jobs as you get a better reputation. For now, Operator is just the one mission, about half an hour's worth of work, where you steal a file from an office computer.

This is all done remotely, of course, and although I don't think Operator is breaking any hacker game moulds, it did proper make me feel like I was Boris off of GoldenEye, a lot of the time. You see, much like in September's Nauticrawl, you're not given any instructions at all. Typing "help" into your command screen will show you a list of all the things you can try out -- but that's it. As such, discovering how to do anything makes you feel like a genuine computer genius. Scanning the area for networks, copying files, cracking into phones. Gathering passwords and usernames. I clackety-clacked my way into security cameras and private emails. The fools, they had no idea!

There are a clutch of buggy eggs laid among the hacking haybales, though. Theoretically, for example, you can have loads of screens open at once. But if you do, you can't type commands properly in your hackerbox, and typing starts moving the map around.

The bigger problem, however, is that not a lot of Operator made sense. I recognise that this is a hacker game where typing "phreak" and then a phone number will give me access to someone's voicemails (which, incidentally, contain a nice amount of character building for what Operator is. You learn about marital troubles and sandwiches being stolen). But things like this don't make sense in the real world ways they need to.

This is why I was affronted by the post-it note in the lavs. Like, yes, loads of people keep login reminders on post-it notes. Classic move. Literally everyone in the office in Operator does it. But what possible collision of circumstances would mean one of them gets stuck on the inside of a toilet stall door? 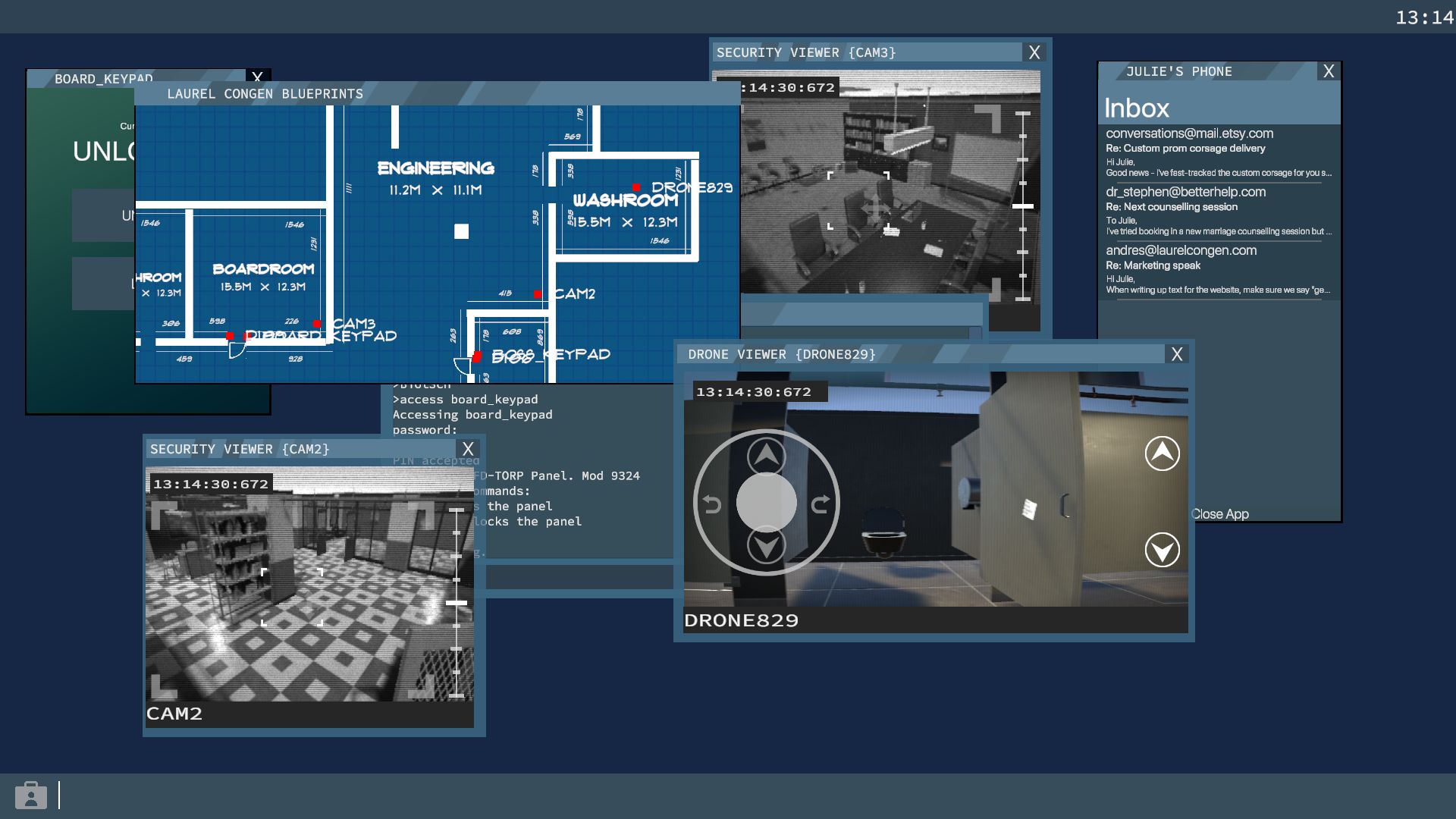 There he goes, look: Harold Bigboy the bossman. He's just been given his new login details by Steve in IT. Steve wrote 'em on a post-it because he knows Harold doesn't like sensitive info being sent on the emails. Harold is about to crumple up the offending white, sticky square like yesterday's workplace harassment memo, when suddenly -- a call of nature! Of the most urgent kind!

He rushes to the next door toilet, frantically scrabbling to get his red chinos down in time. Phew, just made it, Harrers! What a bloody hero. So after some contemplative minutes on the porcelain throne, Mr. Bigboy goes for the all important wipe, when he realises he's still holding the post it note! He whammoes it on the door for safekeeping while he finishes up and pretends to wash his hands -- but he only bloody forgets it when he leaves!

Can't credit it, can you?

Also, for some reason, the office is in possession of a drone, which they keep locked in the boardroom but -- curiously -- switched on at all times (total Harrers move). This drone is necessary because only about 50% of the employees leave their phone number writ large on A4 paper in full view of the security cameras. The rest of the phone numbers you need to spy out by zooming around the place. The drone controls are quite wibbly, though. It drives like a kids' RC car, but one that can fly into walls.

Fortunately, it cannot fly into the ceiling, because there isn't one.

I mean, it is quite funny. And again, I do think Operator could be good, if it stops getting in the way of itself. Less random post-its, more logic that makes me feel smart, please.