The last time I played sunset-hued, post-apocalyptic survival-strategy affair Overland in earnest, back in the pre-apocalypse of 2016, I liked it a lot. In the mid-apocalypse of 2019, I only like it a little. Something's changed - and it's not Overland.

It's not me either, though I'll admit to a certain amount of frenzied shrieking about the passage the time once I realised how long it'd been. What's changed is that Into The Breach came out.

Overland's seen regular updates to its 'first access' build on Itch.io, which these days is open to anyone with $20 to spare (keys used to be limited). The most recent one arrived a few weeks back, and brought a revised UI and some extra presentation fanciness alongside the usual spit'n'polishing. It's a good-looking game, with its Kentucky Route Zero-esque Americana-infused low-poly models and bold colourisation, while 'procedurally-generated survival XCOM from the folk behind Canabalt is still a phrase to make me sit up and pay attention after years of XCOMbuts.

The spell's rather broken for me now, though. Look, while comparing apples to previously-released apples is an inescapable part of this business, I strive where possible to talk about a game on its own merits, as opposed to how rosy-cheeked and sparkly-eyed it seems in comparison to an older love. I'm going to flout that vague rule in the case of Overland v Into The Breach, for a couple of reasons.

First of those is that, basically, both I and Adam (RIP) have talked about Overland on its own merits extensively already - I liked it, he wasn't a fan, and though some things have changed (and improved) since the last time RPS checked in on it, the essential nature of this pretty but brutal, turn-based bug-splatting/evading jaunt has not. 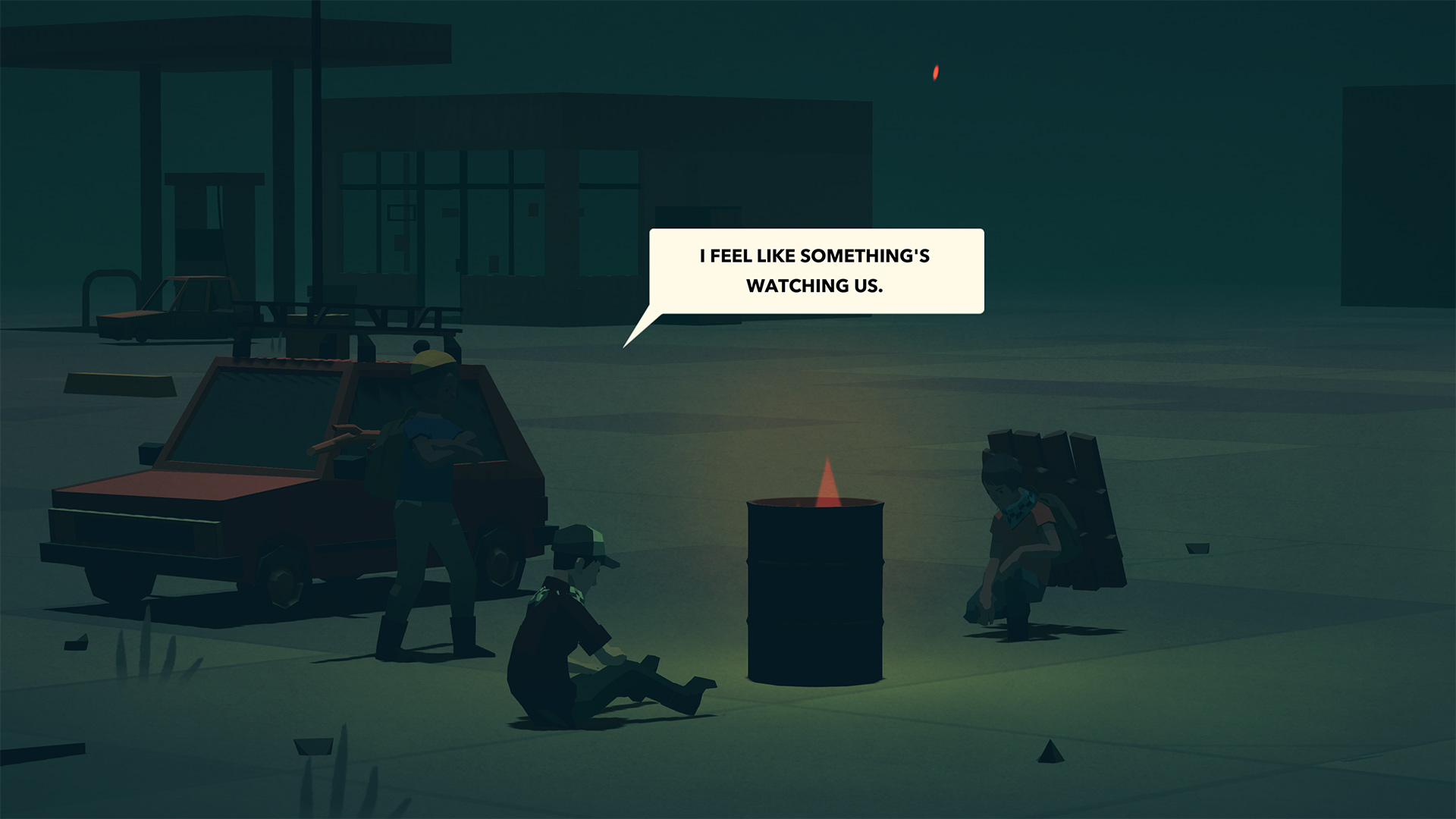 (Which is to say, you try to drag a handful of random survivors across vignette slices of a post-disaster America, scouring for fuel, meds and weapons as crystalline bugs pursue you. It's unforgiving, and it's much more about making difficult decisions about where to go, what to take and who to help than the actual act of twatting monsters).

The second of those is that there are more eerie similarities between Overland and Into The Breach than there are between certain presidents and certain plates of cold meat. This is no-one's fault: it's simply an Armageddon/Deep Impact situation. But, well, let's go over it.

Earth is screwed; monstrous bugs which tunnel from beneath the surface are to blame; a handful of survivors seek to keep perma-death at bay via two action points per turn each; everyone's as fragile as a kitten in a tumble drier; success is more about unit pathing and placement than damage dealt. 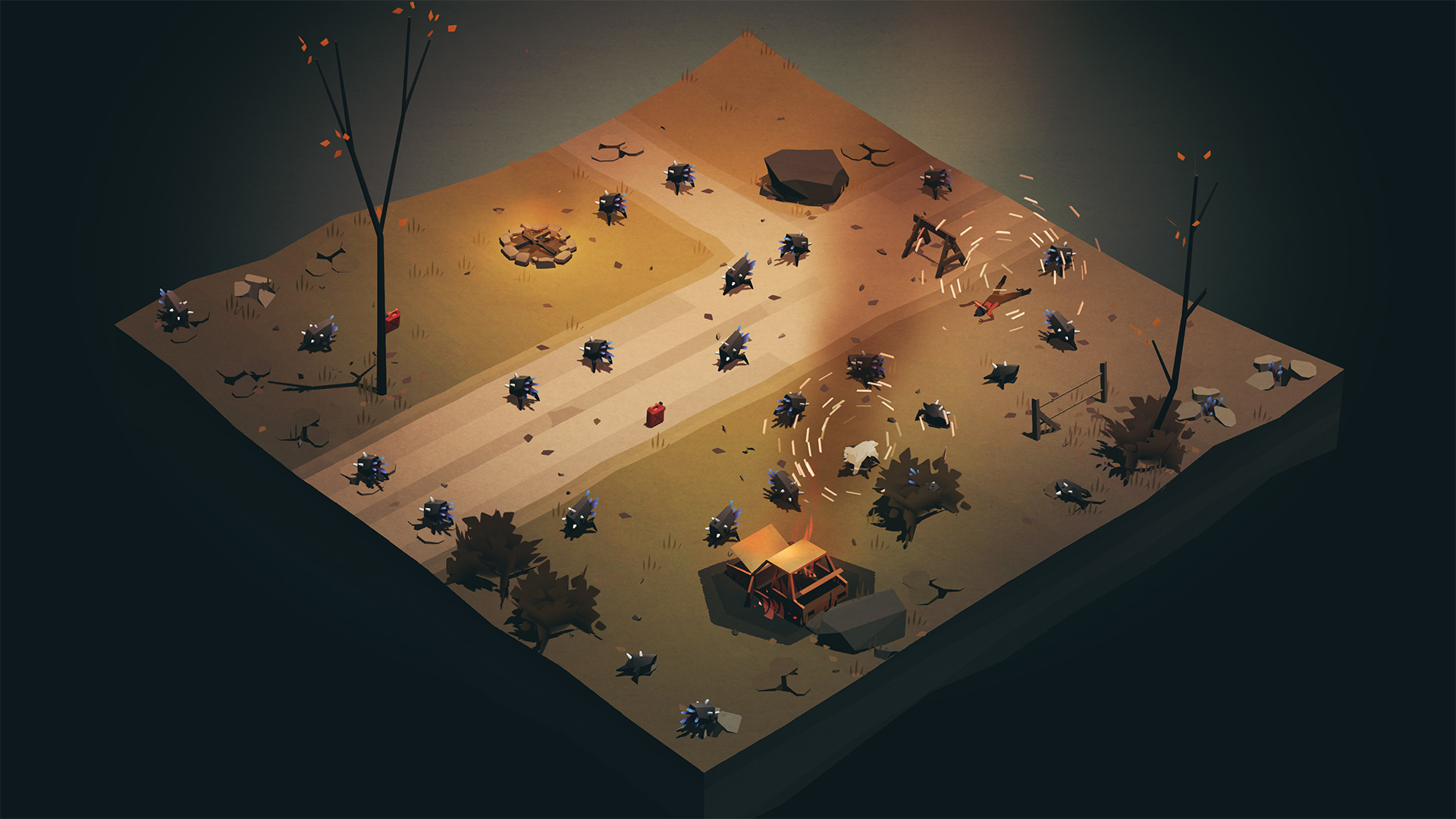 It's Into The Breach, without a shadow of a doubt, and the reason for that is elegance. ITB has trimmed not just fat, but even skin, hair and fingernails in pursuit of an absolute leanness. Though Overland also pursues a certain dream of minimalism, in the light of its unintended rival it feels like it's made from heavily-chewed Duplo blocks rather than pure muscle.

Here's what it comes down to, for me: so many actions, even entire turns taken in Overland are not meaningful, whereas every. single. move in Breach is. Overland's moves are so often but vague steps towards the larger goal of escape, be it shuffling slightly across the map, picking up a single, rarely exciting item, pushing a bin out of the way, climbing in or out of a car or even introducing Mr Bug to Mr Steel Pipe - because, in most cases, the noise of squishing an enemy summons more of the blighters, thus making the attack feel futile. (A lovely idea on paper, in terms of making this survival, not assault - but in practice I now find myself sighing). 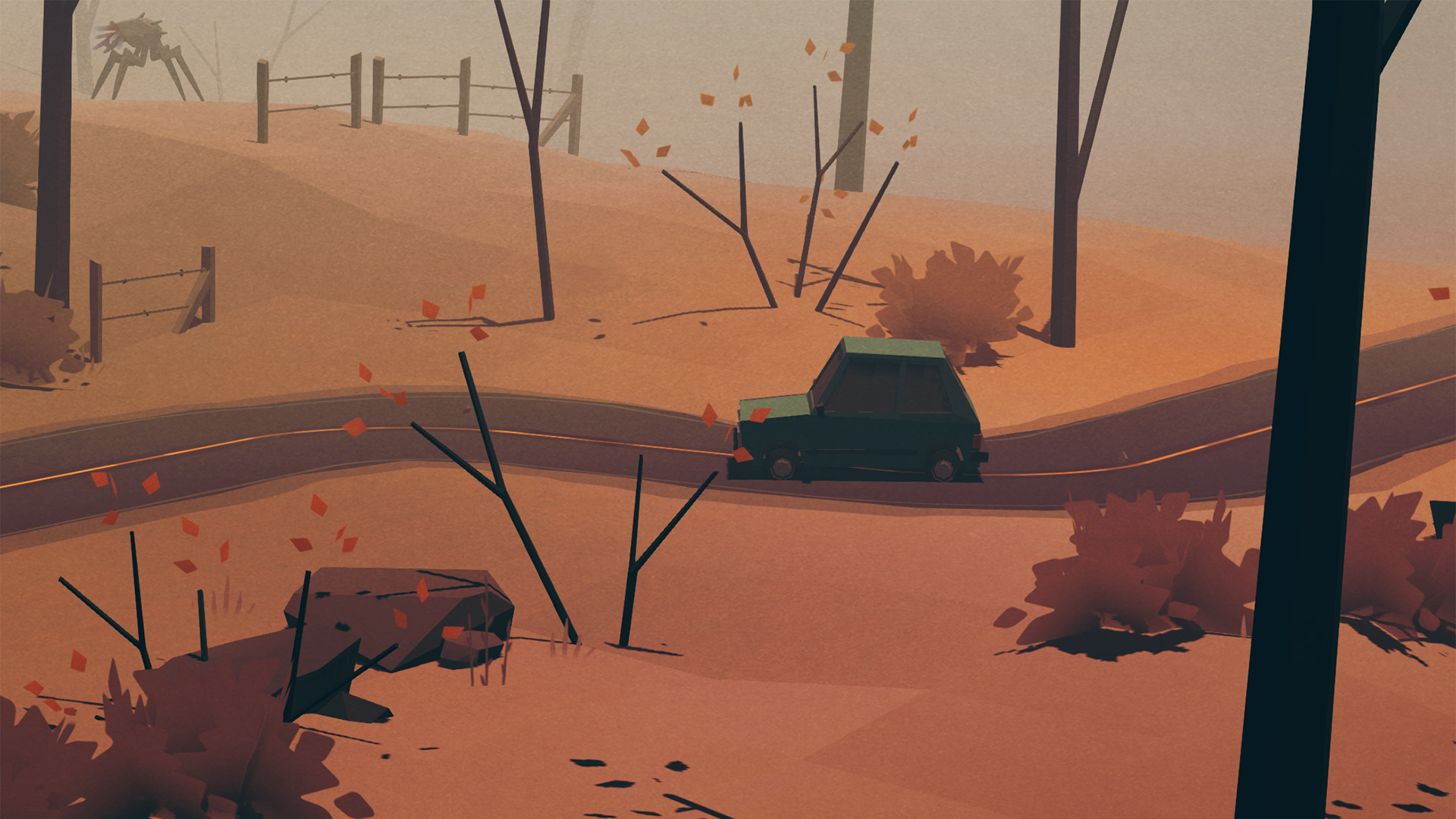 Most of all, though, there's carrying items back and forth, a consequence of Overland's much-debated 'people can only carry one thing at a time, despite the art clearly showing them having two whole hands' mechanic. (If they have a backpack, they can carry one more thing. A car boot, meanwhile, can store just one stick, health pack, bottle or whatever. It's a small, small world). In 2016, I didn't particularly mind that humans in the Overlandverse were apparently incapable of holding two sticks at the same time, or that cars which clearly had a full-width back seat only had room for three people (thus necessitating some powerfully painful decisions about who to leave behind in the event your group grows to four). Hard choices = tension.

Now, well, it's not just that it's so very arbitrary (maybe there is a sleeping giant turtle on that car's back seat? Maybe the great calamity gave everyone a frozen left hand?), it's that it means so much dead air. Dropping your pipe to pick up a gas can, walking the gas can to your car, filling the tank, walking back to the pipe - the entire process takes maybe four turns.

Sure, there's tension in that you're often doing it while side-stepping unearthly horrors or spreading flames, but it often so passive, the moments of achievement so comparatively few. The operative verb here is 'carry', and, well, ultimately there's only so much inherent drama in whether to pick up a bottle or a branch. 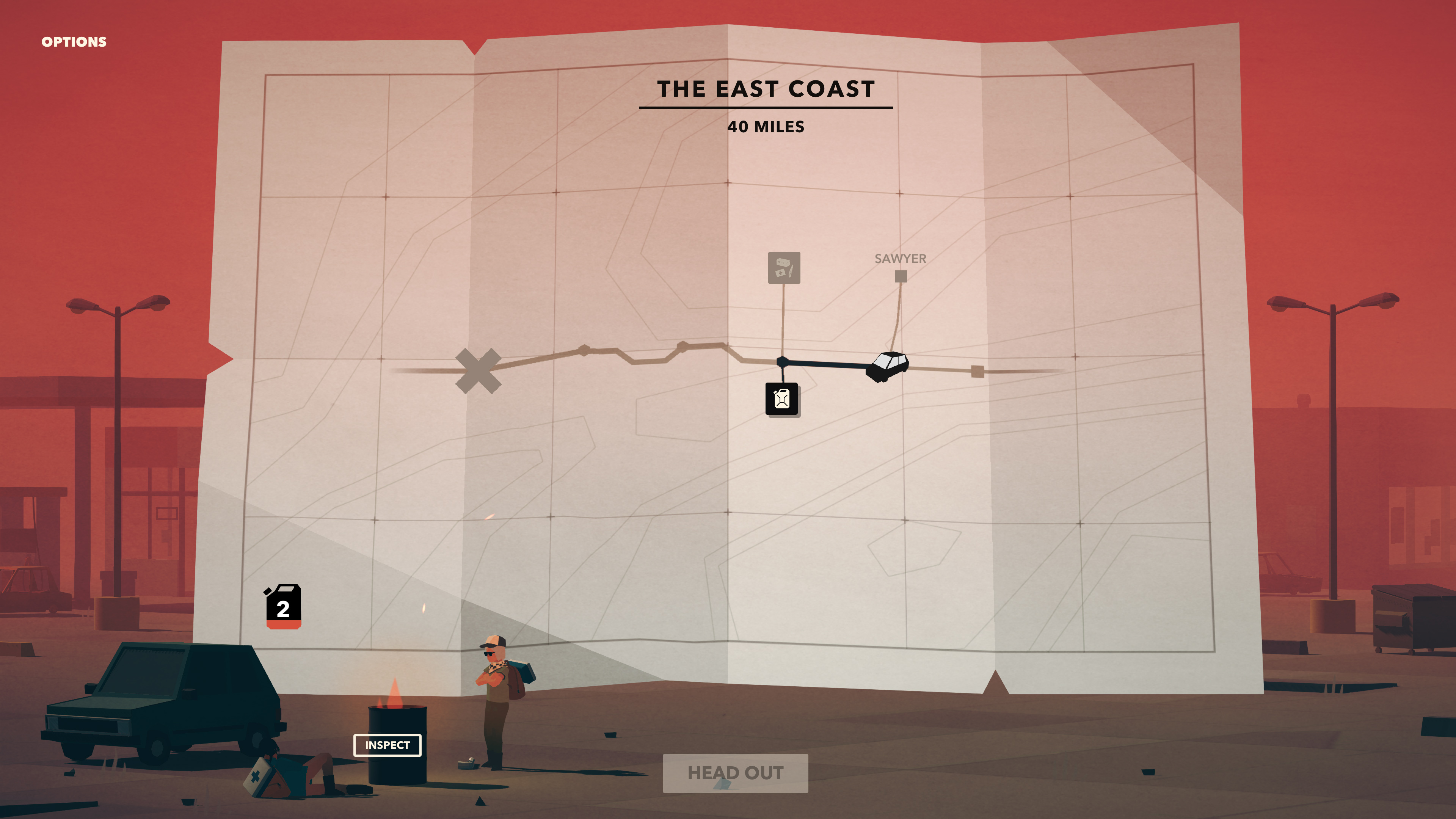 This is, it should be said, intrinsic to Overland's nature, rather than any kind of accident. Overland is all about painstaking setup to escape a little later, whereas Breach is all about taking the shot, right here, right now. What it does do better than most of its ilk is heartbreak. A character dying is one thing, but choosing to leave someone (or, worse, some dog) to be mandibled to death because there's no space in the car (damn you, giant turtle) is something else entirely.

Particularly when your sometime friend then turns up at the next area you stop in, now unreachable in their thirst for vengeance. Because then you have to choose whether to kill them or not. Choosing between medikit or car repair kit is not chilling and thrilling; choosing between people's lives is. That's the stuff I want Overland to double down on.

The newest build makes some strides there outside of battle - there are now more opportunities to hear your gang speak their minds while they lick their wounds, but this doesn't really address the sense within a battle that everyone's really just a walking inventory slot. It's upped the prettiness and the approachability, with more variance in environments, some truly lovely new pre/post-mission art and an interface that makes a lot more sense than before (though some issues with character-switching remain). But any gains in how present and precious your people feel remain hamstrung by the heavy focus on unrewarding item-juggling.

My mind turns - another comparison, I'm afraid - to Below, another absurdly-long-in-development game born in the half-a-decade-ago 'indie' moneyboom that promised a beautiful dream of decently-budgeted creativity, unfettered by conventional commercial concerns. Games to sell t-shirts and soundtracks and courier bags and badges. 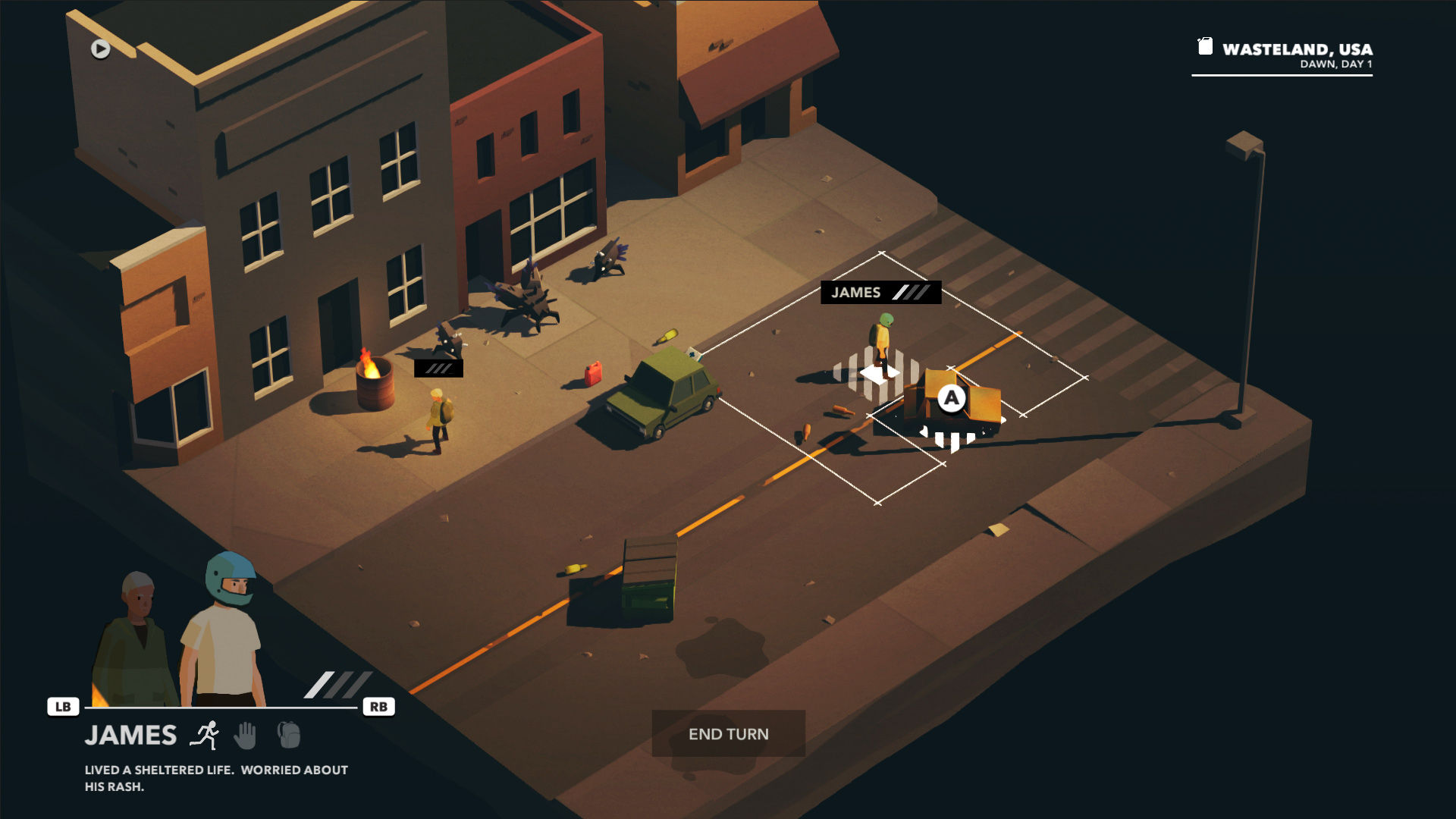 In practice, as Alice Bee also found in our Below review, there's a sense that its striking art and world remained tethered to early, even rudimentary mechanics with a misjudged sense of hard graft vs accomplishment. A sense that, perhaps, both games have clung doggedly to aggressively punitive ideas that never quite blossomed into some unique brilliance, but which they needed to prop up the attention-grabbing aesthetic.

I like Overland a lot more than I (sadly) do Below, because at least each new journey is a new journey rather than a repetition, but in a post-Into The Breach world, what once felt like noble toil now feels like time-wasting grind.

It's not at all Overland's fault that the world changed around it last year. It's not too late, either, but if it's to feel fresh in this brave new world, it's got some very difficult decisions of its own to make.

Overland's current build is available now as early first access, via Itch.io, for $20 (or more, if you wish to).