Path of Exile is an excellent ARPG built on top of an unusual economy, where every item - even the most throwaway of identification scrolls - has intrinsic value in both usage and trade. There's no gold or even premium currency used in-game at all, and to top it all off, there is no auction house. The only way to exchange gear is direct; player to player.

For the longest time, Path of Exile's trade system has been a jury-rigged and unusual thing, routed through third-party sites tapping into an official API which allows item stashes to be shared online and prices posted, although the trade itself always has to happen face-to-face in-game. This week, Grinding Gear Games cut out at least half of a middle-man, launching their own trade network site, currently in beta.

Trading in Path of Exile is a thorny issue. Initially, there was no easy way to find other players to trade with outside of an overcrowded trade-chat channel. While it would be relatively easy for the studio to implement an auction-house style system to allow players to rapidly swap possessions, they have actively chosen not to, feeling it would dilute the essence of what they feel makes Path of Exile work; scavenging for gear, customising what you have and adapting the growth of your character around the items that you find.  Don't just take my word for it - read the developer's own manifesto on the subject. 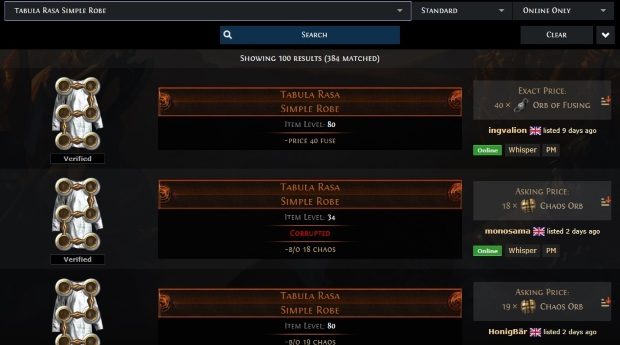 Still, player demand for easier trading systems persisted, and Grinding Gear implemented their official trade API, allowing the community to handle the heavy lifting from then on. With the (beta) launch of the official trade network, almost all of this can be done from the game's own official site, although there is no effort being made to shut down community-run trade hubs either. The API itself has been upgraded somewhat, displaying whether a seller is online, AFK or otherwise, which should help smooth out the process, although the final trade must still happen face-to-face in-game.

While trade is now becoming easier than ever, some players still want the thrill of improvising and adapting on the fly, and the bragging rights inherent in surviving against the brutally hard endgame this way. Grinding Gear Games implemented an optional 'solo self-found' playmode with its own leaderboards in run-up to the Fall of Oriath expansion. In this mode players cannot form parties or trade with others at all and so your position on the ranking is entirely dependent on that ever-compelling blend of luck and adaptability that ARPG fans hold in such high regard - ideal for the hardcore crowd.

It'll be interesting to see whether this new trading setup significantly affects the price of certain unique items being traded, or if it becomes standard for Path of Exile in the long-term. It could be the first step towards a more traditional market system as seen in most MMOs, but I don't think so, especially after seeing Diablo 3's own market faceplant so completely. Either way, for those who would rather roll the dice and take whatever the game chooses to dole out, there is at least Solo Self-found mode.