If you click on a link and make a purchase we may receive a small commission. Read our editorial policy.
Developer: Owlcat Games
Publisher: Deep Silver

Starting a new tabletop RPG campaign is a bit like joining an complicated polyamorous relationship. You have to make sure you like your companions, but most importantly, you and the Dungeon Master must share the same vision. ANYWAY, my point is that in a game of Dungeons & Dragons, some DMs like to follow the rules by the book, others just use rules as a frame to tell a story. Some focus on combat, and some enjoy drama. Some have a very strict plotline to follow, while others start with vague ideas and let the players wander around. There isn’t a right or wrong way of playing. It’s just a matter of finding a group of people who like the same things you like.

Booting up Pathfinder: Kingmaker feels like starting a new tabletop campaign with strangers. After all, the game is a close adaptation of a renowned D&D campaign. But while I have a passing acquaintance with this ruleset, I don’t know what kind of storyteller will guide me through my adventure. What kind of Dungeon Master is it? 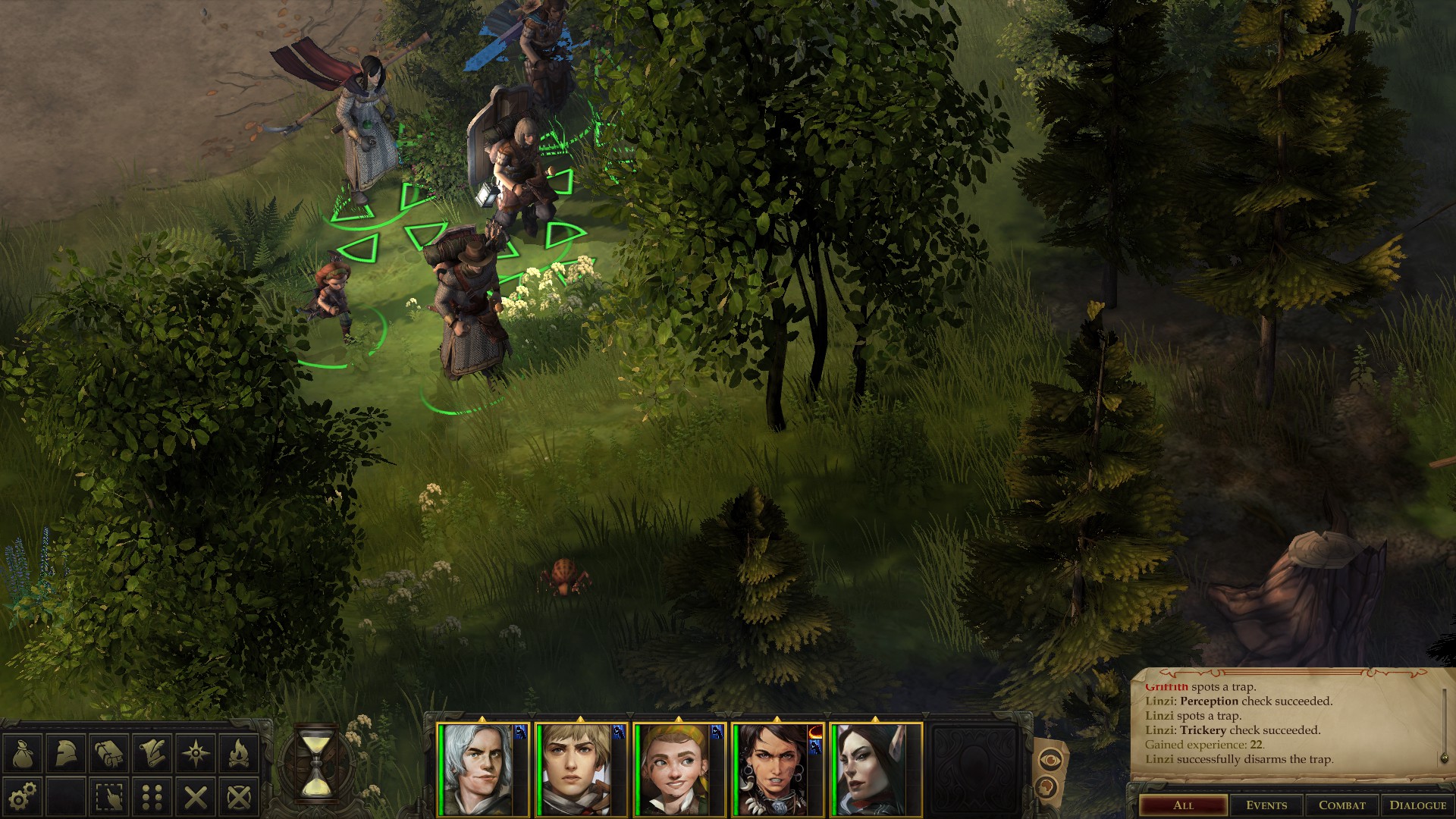 I sit at the table, eager to start. The game immediately lends me a character sheet and tells me to make a character. One thing is certain: this DM is not good at dealing with newcomers. It’s not a matter of maliciousness. They are simply so enmeshed in the Pathfinder world, so familiar with its rules, they can’t see why concepts that feel natural to them could also be confusing for new players. It tries to answer my questions, but every new tooltip is as dense as a brick. I’m glad I played a bit of D&D before, or I would be utterly lost. Still, the game feels overwhelming, and this feeling never truly goes away. Dazzled by too many possibilities, I decided to model my character after Griffith from the Berserk manga. I am going to get my own kingdom, after all. 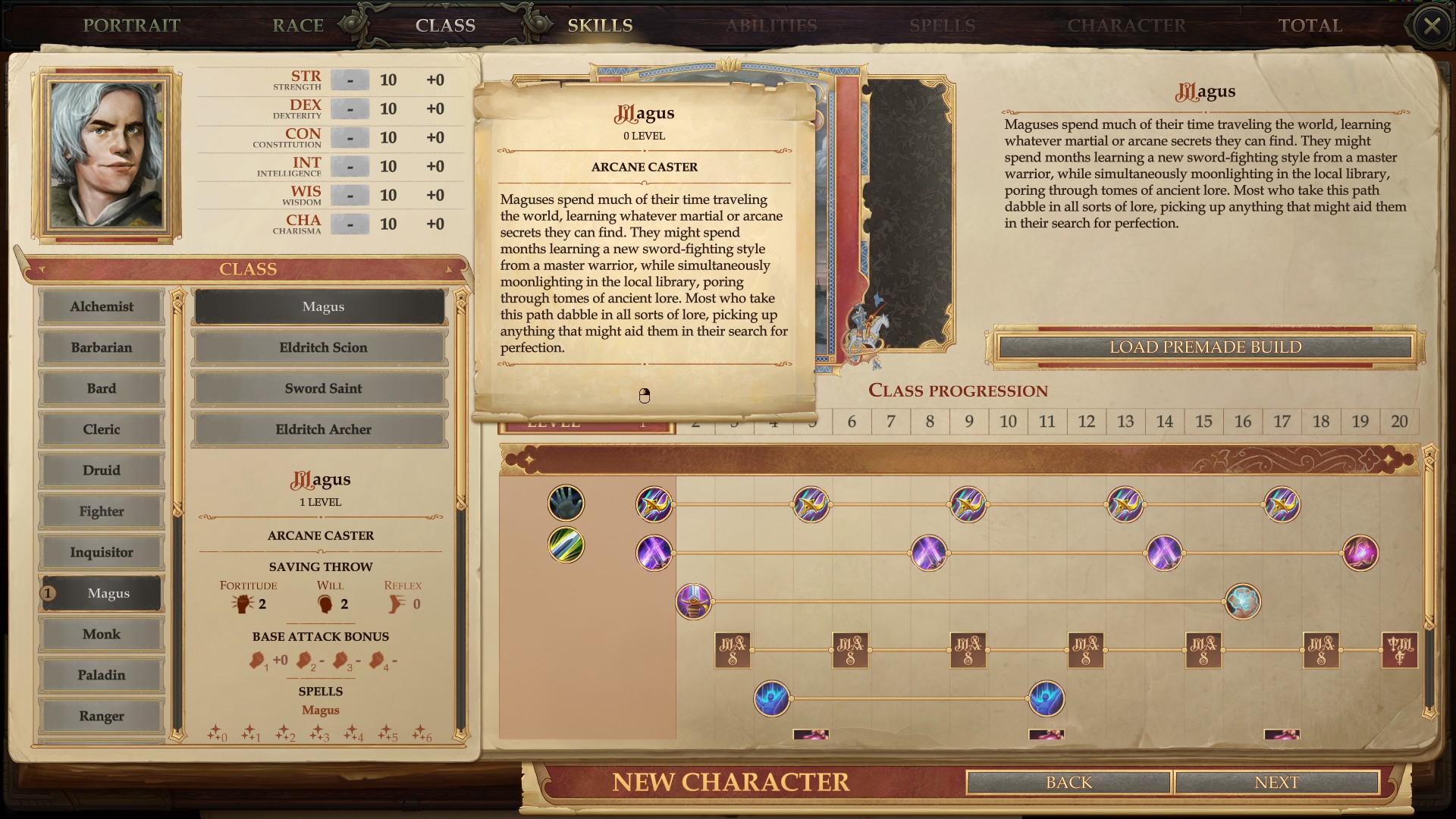 The main appeal of the Pathfinder campaign is the opportunity to rule your own little kingdom. Before ruling the lands, though, I have to reclaim them from ancient curses and vicious bandits. The tutorial leaves me with a ragtag team of classic fantasy tropes, a list of villains to kick, and a large time limit (this is an RPG where many quests are given a countdown, with negative consequences if you fail to finish them in time, rather than allowing you to ignore impending doom in favour of fishing).

Battles occur in real time, but at any point I can pause the game to give orders to my party. The initial fights aren’t difficult, but as my party grows larger and the fights more intense, it becomes harder to understand if the fight is going badly because my strategy is wrong, or because of some unlucky rolls. Virtual dice rolls govern every action I take, and the results get quickly buried in the combat log. 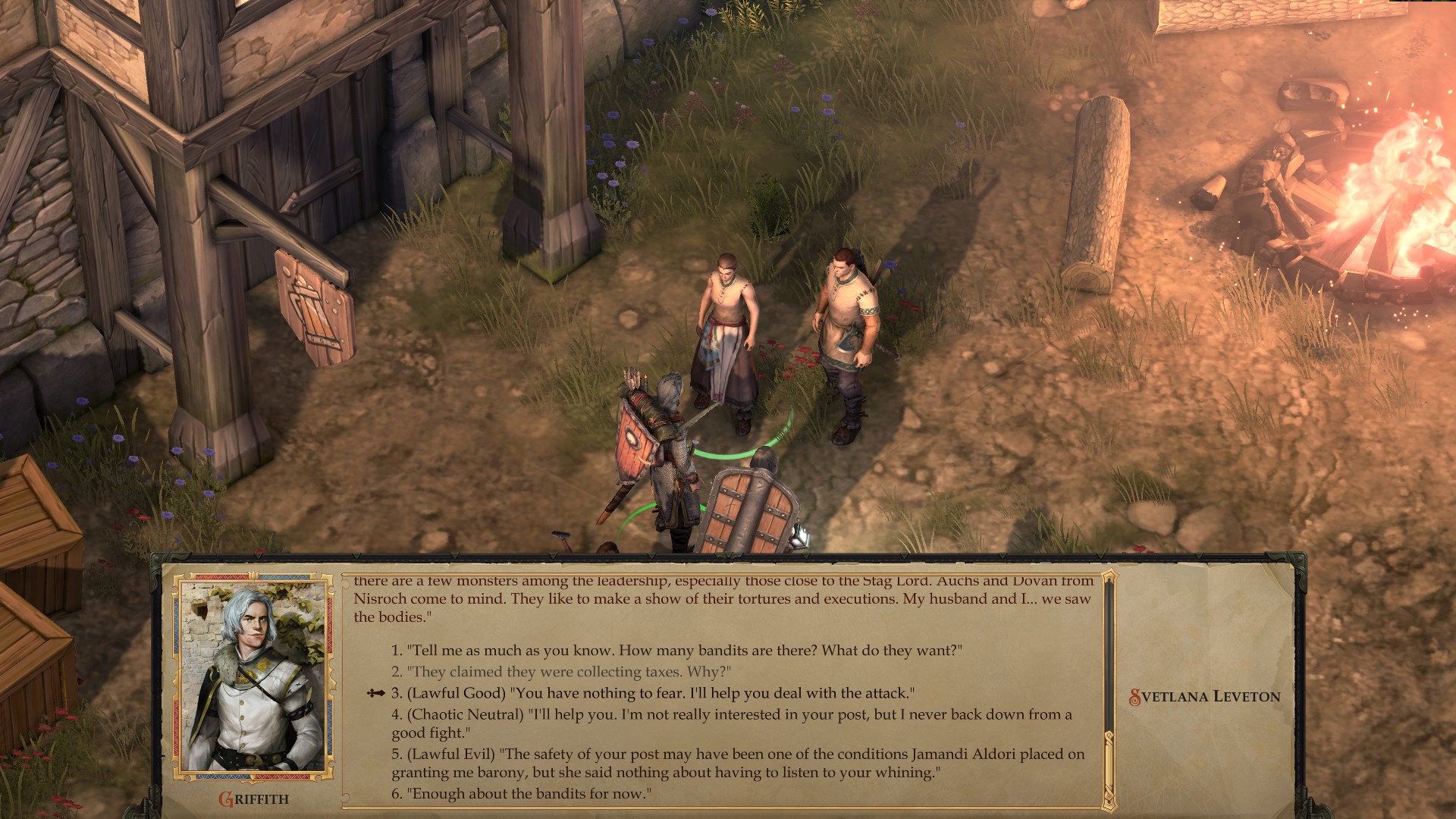 In a tabletop campaign, DMs use their storytelling skills as much as their rulebooks. They are able to assess in real time whether throwing another casual encounter, or killing that limping party member, would be a fun challenge or just an act of cruelty. But the spirit that governs Pathfinder: Kingmaker is incapable of showing such mercy.

Unless we count the options menu as part of the DM’s duties, in which case they are a generous being. They let me tweak various rules, such as deciding how strong the enemies will be (anything over “normal” is an exercise in masochism), choosing how often the game will auto-pause, and even allowing me to disable death. Even the more technical parts of the game, like levelling up the characters, can be fully automated. 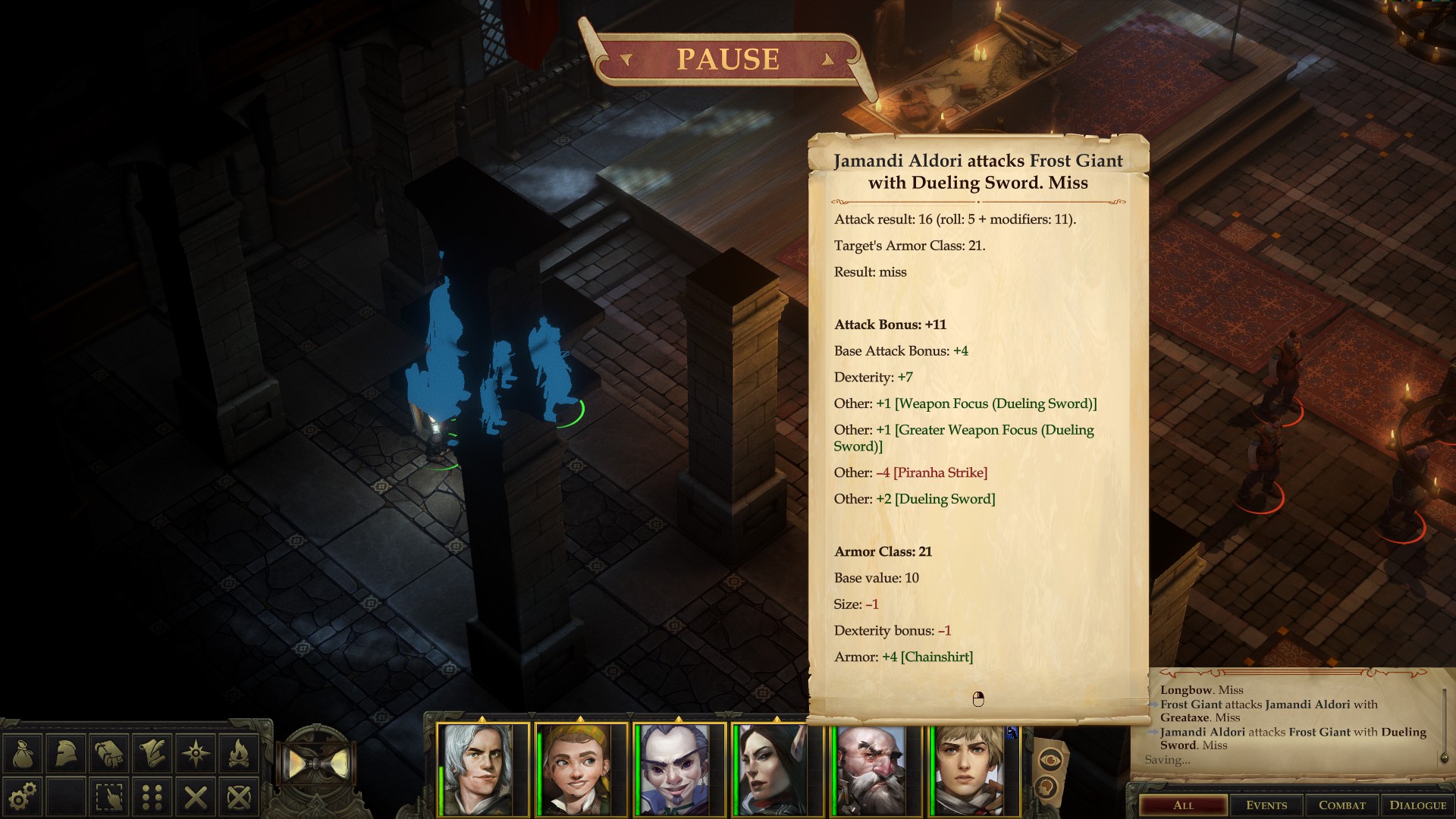 A part of me is grateful. Another part feels like the DM is treating me like a child, telling me “this is too complex for you” instead of properly explaining how to play. I can play without dying too much, but I know I’m missing half of the fun.

Because I am having fun, after all. I like travelling the world map, discovering new routes and trying to avoid the random events. I like to explore pretty locations while trying to not think too hard about the time limit hanging over my head. In this early part of the story, I need to reclaim the place before rival mercenaries do it first. The time limit is generous, but it gives me anxiety nevertheless, and I sadly try to limit my detours. The world is pleasant enough to explore (I love the number of critters hanging around) and it’s nice for once to be just a random fantasy adventurer instead of a hero. 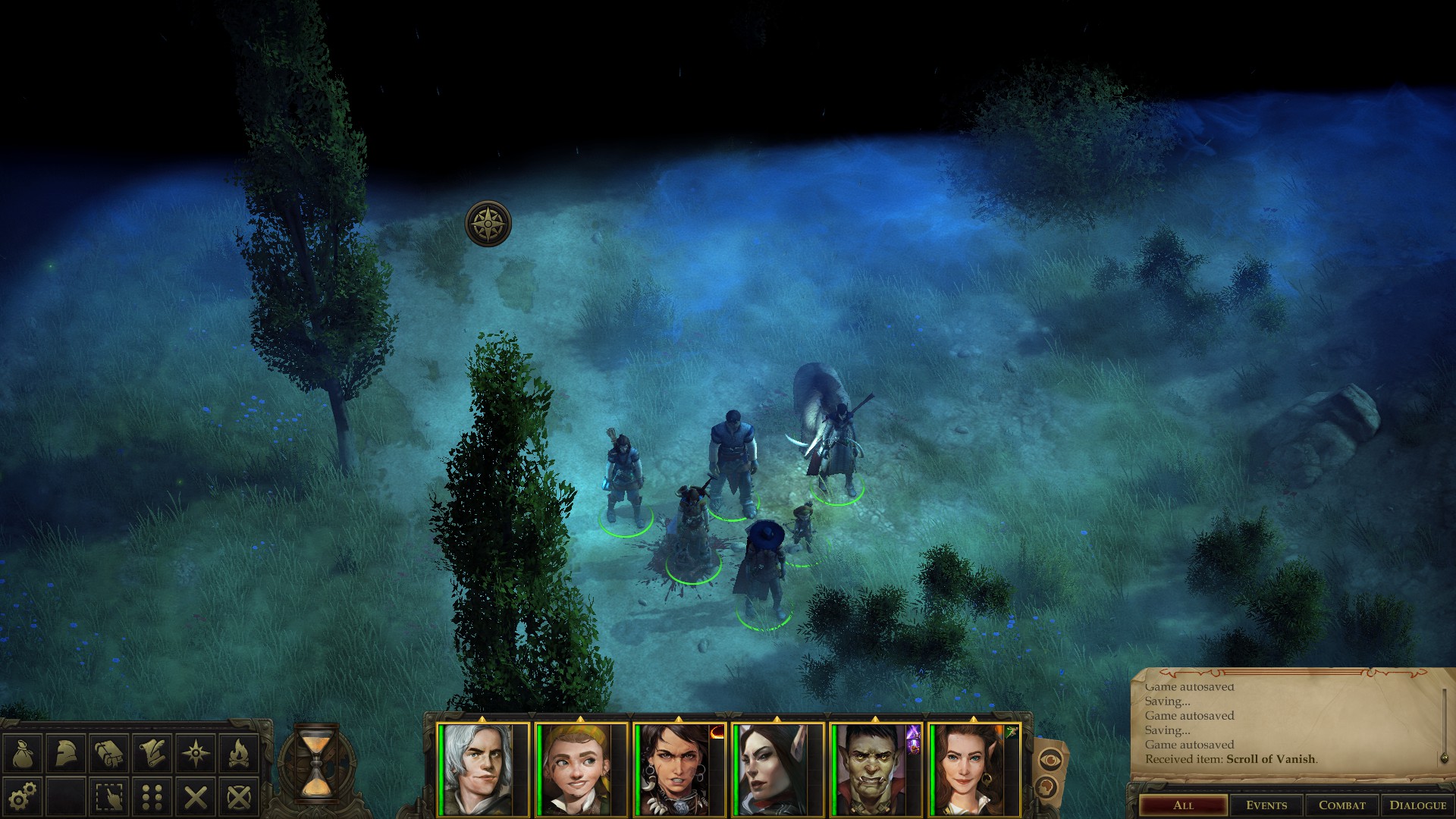 But all too often, the DM interrupts my wanderings with new draconian rules. Want to level up? You need to choose which class to level up, select new powers, and distribute stat points. But does your build even make sense? Who knows. Want to rest? Here is a new fiddly menu. I keep playing, but I can’t stop thinking of another RPG I played not long ago, the one with the funny DM that let me do anything as long as it was amusing enough, incredibly stupid, or both.

Divinity: Original Sin 2 has spoiled me. 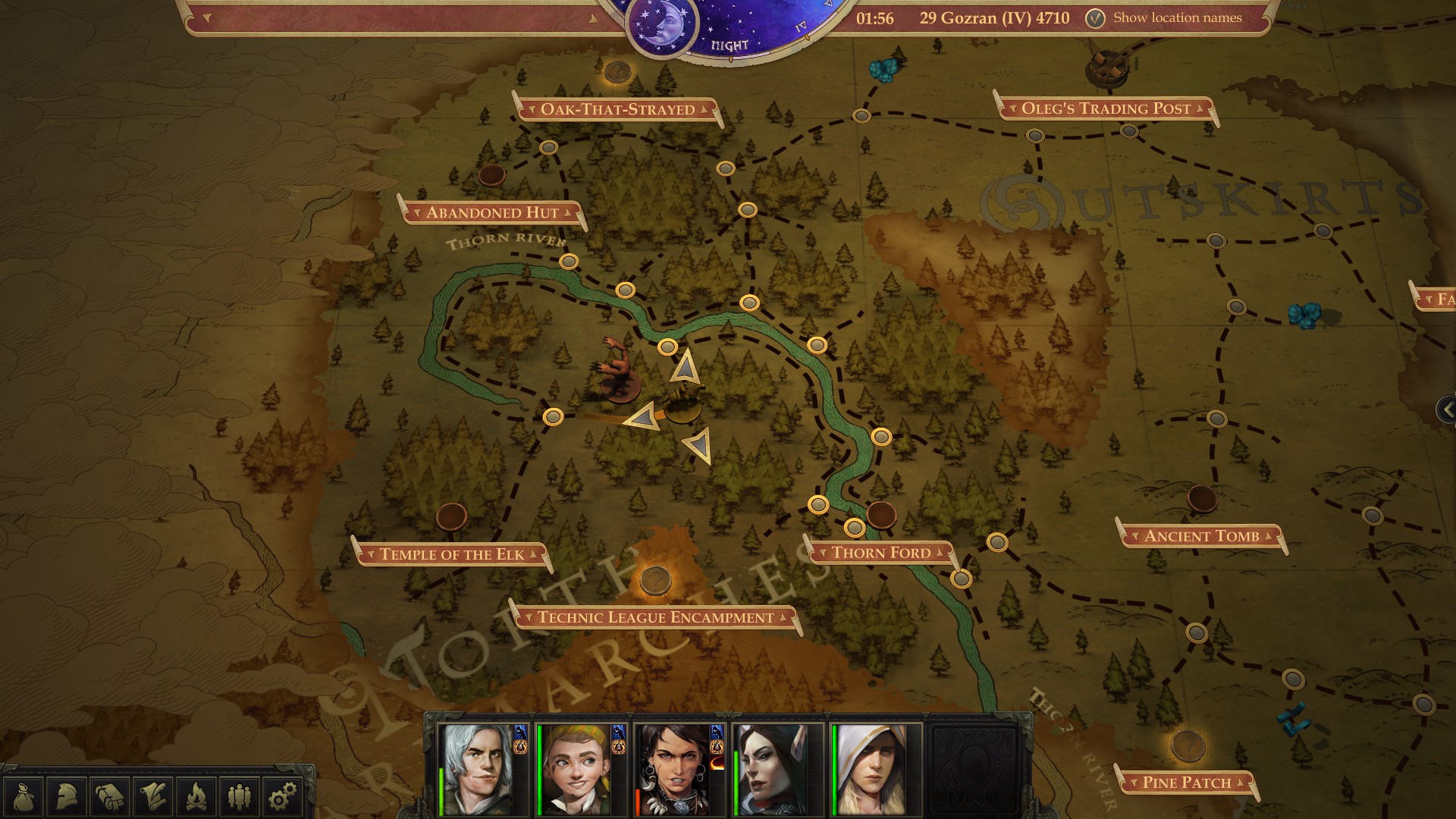 After clearing the first act and reclaiming the Stolen Lands (it took me a dozen hours), my character levels up from simple fantasy dude to Baron. With the new role comes new responsibilities, in the form of a management game.

I reclaim more land, establish new outposts, embellish my city with new buildings. I share the spotlight with my party members, appointing them as advisors so they can give my kingdom various bonuses and solve problems in my stead. It’s a game within a game, and while it doesn’t have the complexities of a true management sim, I’m not complaining. I find my kingdom easier to manage than my own party. 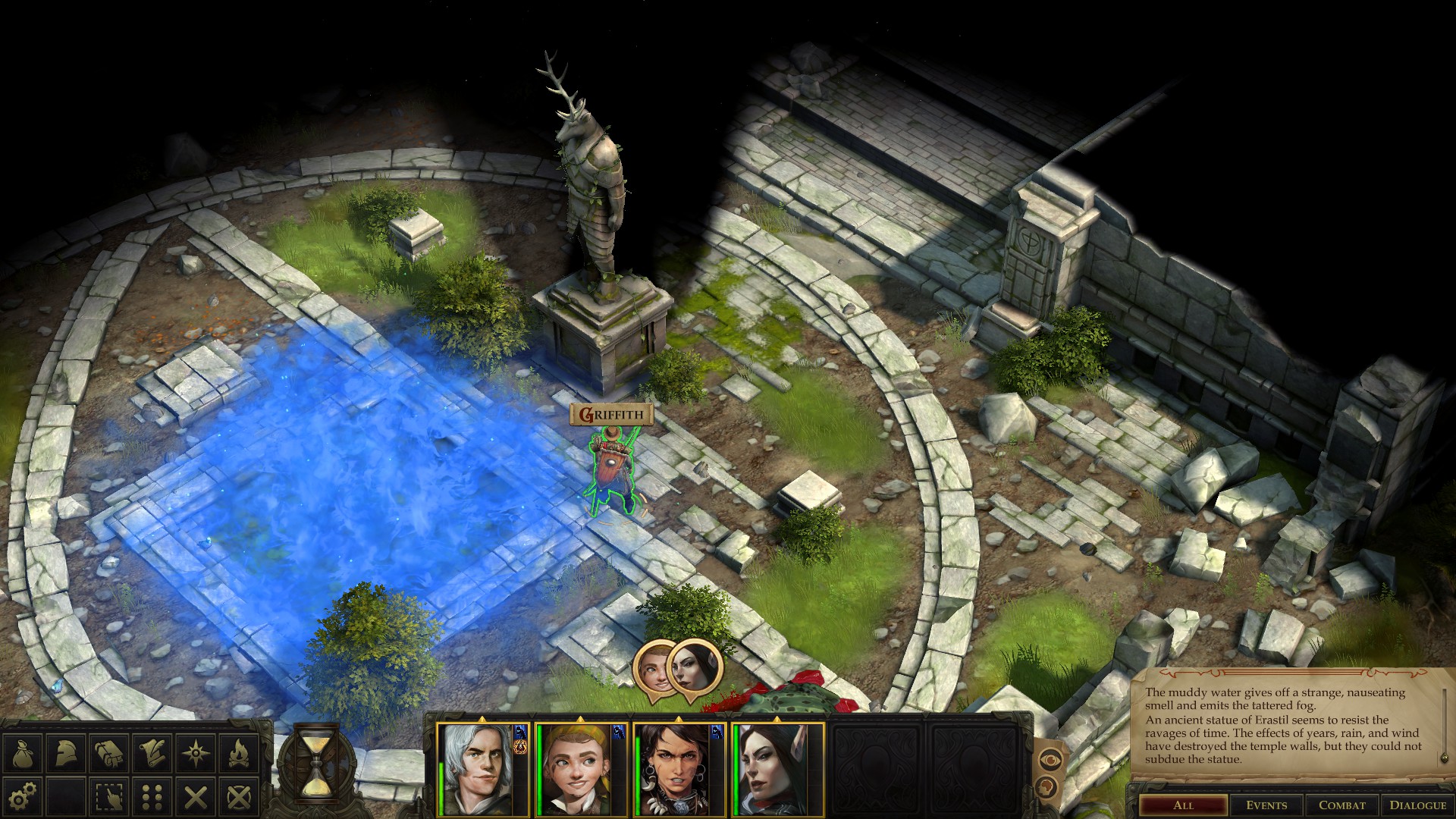 My new routine is pretty varied. I explore new locations, and as days pass, new problems arise. Some can be solved with a flick of my fingers and the intervention of an advisor, while others, like horrible monsters and assorted calamities, require a first-hand approach. I am half ruler, half fighter, and I have plenty to do. I only have one issue with all of this: the game seems way more interested in telling its own story than in telling mine. 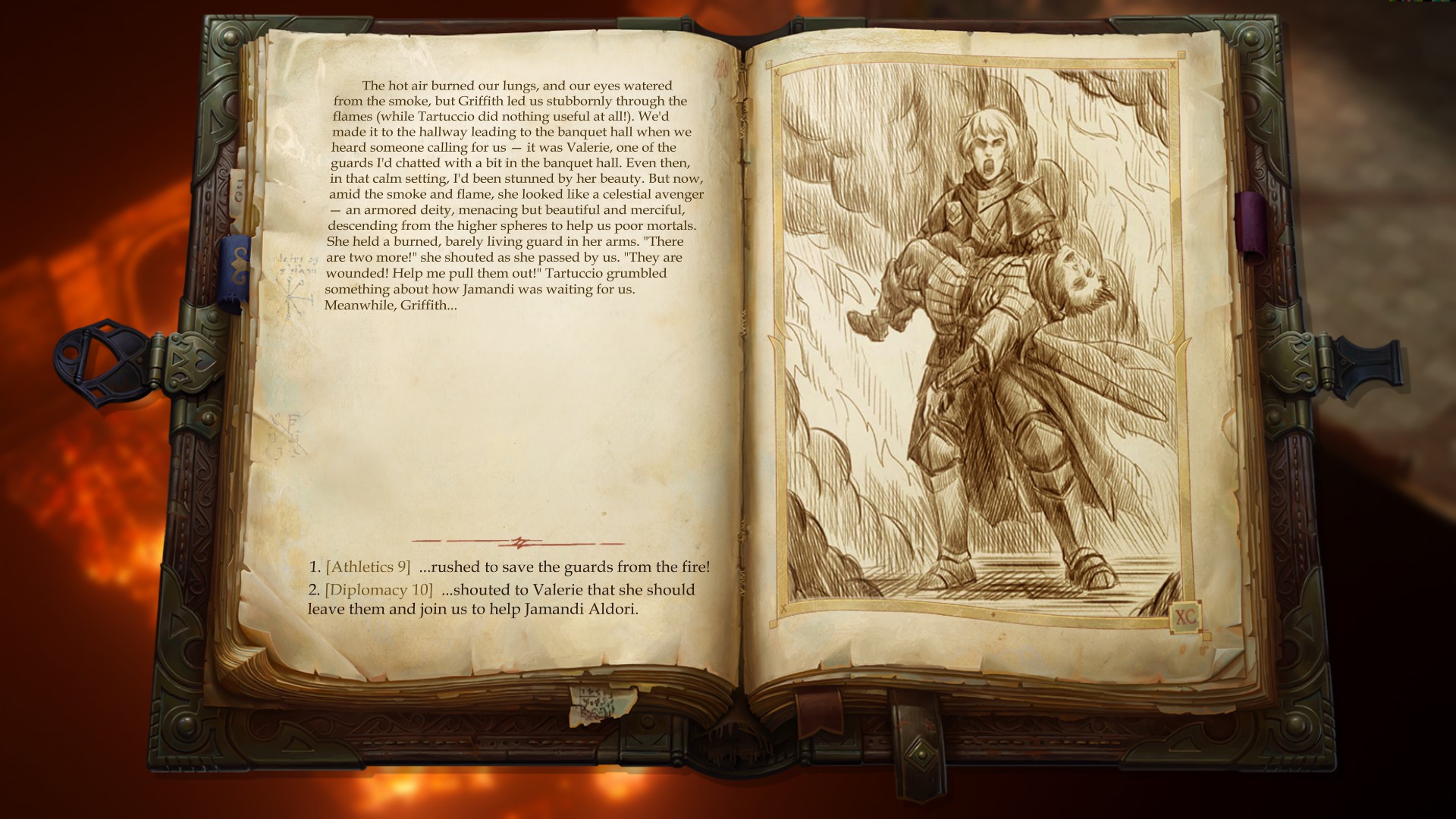 The writing is so dry. Dialogues are endless lists of names and territories, accompanied by informative windows. Newly acquired companions reveal their sad background stories as soon as I meet them. And I am struggling to roleplay as my character, because the few dialogue choices often don’t fit with the stoic, charming guy I want to be.

One example that made me groan is a random event where some slavers attacked my party, demanding I consign them one of my men. It would have been a tense scene, if not for the option to casually ask them for more information about their enslavement company. Sure, I want to threaten you, says the DM. But also, here is a lore dump. 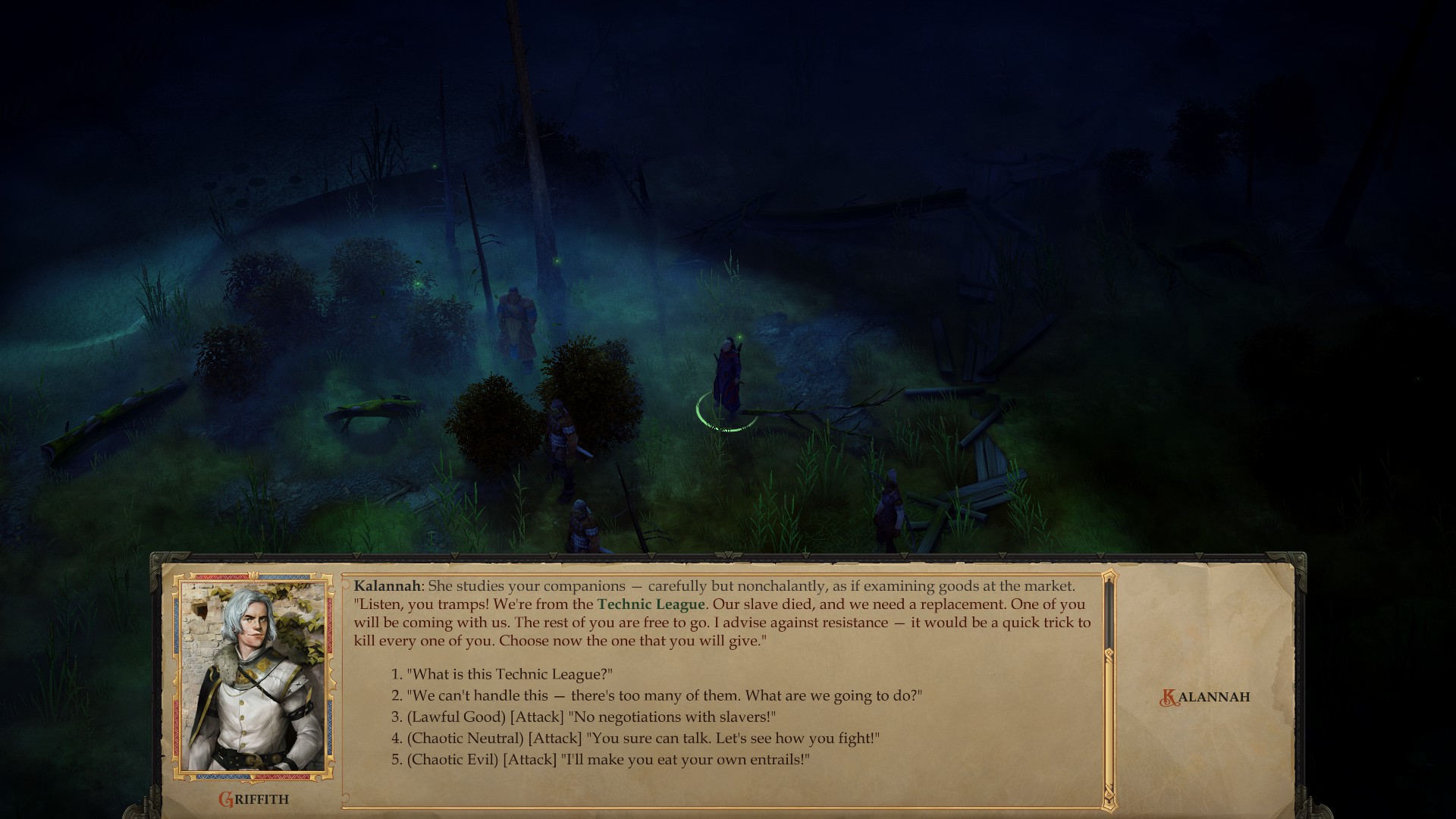 I’ve dealt with this kind of DM before. It’s the kind of person who spent so much time creating their perfect fantasy world, drawing maps and crunching numbers, they forgot what makes a role-playing game fun: the drama between the party members, the uneffective solutions, the silly shenanigans. At least, that’s what makes D&D fun for me.

I know there are people who love this kind of DM. They will admire the focus on battles and numbers, the variety in characters and builds, the merciless attention to detail. For players who grew up loving games like Baldur’s Gate and Neverwinter Nights, Pathfinder: Kingmaker might feel like sitting around a table with old friends. But I can’t stand DMs who prioritize the rules over the joy of telling a story.