This is Playstyle Royale, where I head into Playerunknown’s Battlegrounds and try to win my chicken dinner while adhering to arbitrary rules. It’s been a while and the desert map hasn’t yet received the Playstyle treatment, so I thought it’d be nice to kick off this year with some sightseeing.

As a sightseer, each round I’ll try to visit four locations I’ve deemed touristy enough to deserve my attention, and I'm forbidden to loot anywhere else. As usual, I’ve got five attempts before I have to call it quits.

I’m all set to venture out as a solo traveller, but a wild Paul Dean appears and I manage to rope him into my road trip. He's usually spotted over at board game site Shut Up & Sit Down these days, but he's not above a spot of Battle Royale. Once he’s up to speed on the desert-trotting plan, I suggest we drop down into the picturesque eastern islands for our first round. They turn out to be far spicier than I expected, and we're both killed in the first minute of the chaos. My mistake was to pick somewhere directly under the flight path: I’d forgotten how swarms of fellow travellers can ruin even the most exotic attractions.

For our second game, we parachute down into… the junkyard. 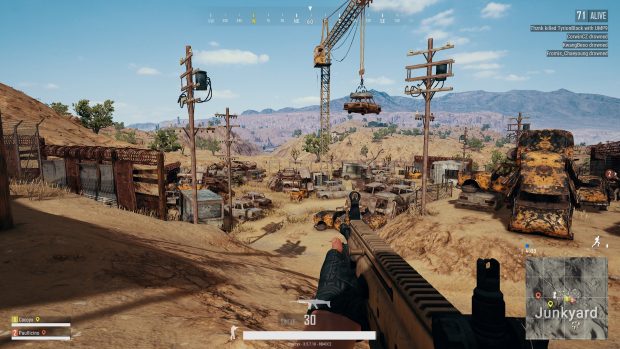 Ok, so it’s not the most scenic or decadent of locales - truth be told, at this point I was plotting routes based on places I thought might look interesting rather than those where a tourist might choose to roam. I was hoping for towers of crushed cars and rolling hills of debris though, and on those counts the junkyard lived up to my wildest expectations. Paul is concerned about the lack of good loot held in the junkyard confines, but I remind him that we’re tourists first and shooty men second.

It quickly becomes apparent that we should have prioritised finding a car, with the next spot on my list - the charming and touristy sounding Cruz de Valle - too far to reach by foot before the circle of death reaches us. I improvise, and take us over to the graveyard that’s a little ways to the west. Visiting cemeteries on holiday is a thing, right? It has to be, there’s a Wikipedia page about it. 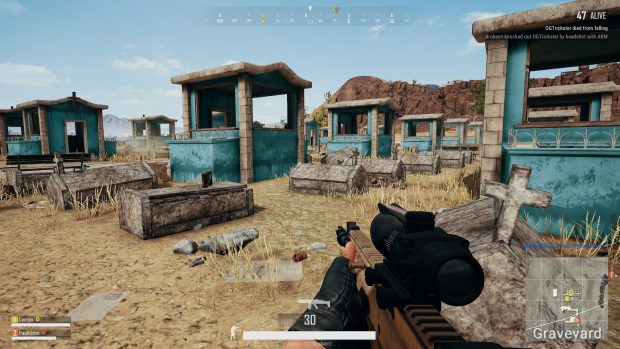 The circle has contracted three times by now, and everywhere on my list seems unreachable. Screw it, I say, and direct us towards a water treatment plant in the north. We can be… educational tourists? We find a buggy, but by this point it’s too late to head out to anywhere more interesting. We do spot a villa on the drive up though, and our wheels give us enough time for a quick stop-off. Paul poses in an archway, and I begin to think this sightseeing tour might not be a bust after all. 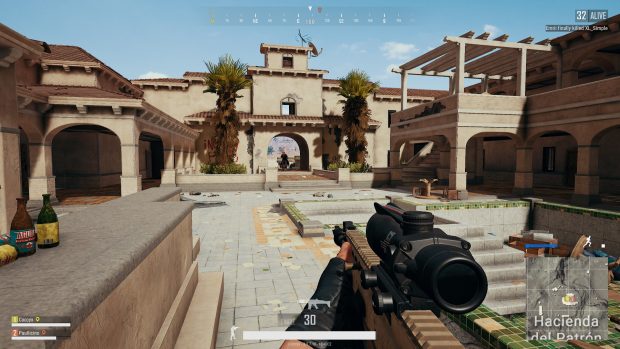 A few minutes later, an impressive Kar98 headshot knocks me out of the car and down to my knees. Paul manages to pick me up and we take cover behind a nearby rock, but our assailant swoops in and downs us both with an AKM.

For our third round, I take us to what I thought was the enticingly named coastal town of Puerto Paradiso - which I only realise doesn’t actually have a ‘d’ in it until much later. It’s… not great. 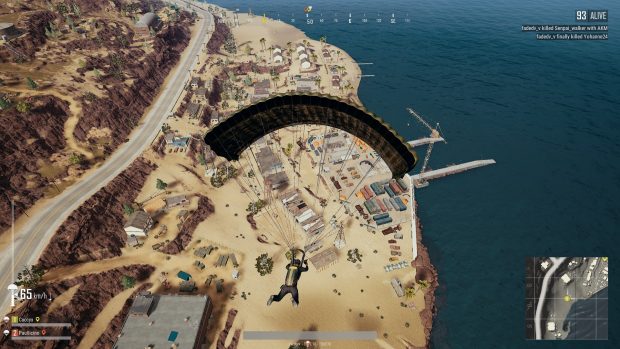 I land some distance away from Paul, so I have to fend for myself against someone who’s been fortuitous enough to find a gun before me. In this case, ‘fending for myself’ means running away until I find a pistol, which I use to take out my pursuer after Paul’s weakened him with a few well placed shots from afar. My celebration is short lived, as his squadmate promptly turns up to kill me and then Paul with an auto-shotgun.

We start the next round by dropping into a prison, tucked away on an island in the far south-west. Now, I know people don’t often visit abandoned prisons on holiday, but there are palm trees nearby and to my English mind, palm trees are capable of transforming anywhere into a tourist hotspot. We see two people land with us, but they vanish and mysteriously never appear again. 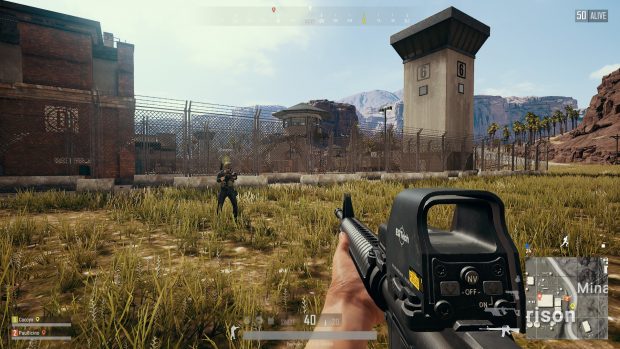 The circle has not been kind, and nor have the vehicle spawns. We need to get to the east side of the map, and it turns out my sightseeing plans have been somewhat scuppered by Miramar lacking the high-chance vehicle spawn spots the are dotted around Erangel. We’re instead reliant on the merely ‘possible’ spawns labeled on the interactive map I’ve got up on my second screen. We walk past five of them with no luck, like revellers stumbling past taxi ranks on a Saturday night. I was hoping the one water vehicle spawn would cough up a jet-ski to save the day, but it fails to materialise.

When we do find a car, it’s not even marked on my map. We’re in the blue by this point, so there’s very little time - but I’m not the kind of traveller that lets concepts like ‘time’ and ‘death zones’ stop me from getting the most out of my holidays. I decide we can do a quick drive by of Minas del Valle, which I reckon will be a charming little village on top of a nearby mountain.

I immediately take the wrong turning, and make up for it by driving us off a cliff that severely injures the two of us. We’re both near death as the blue zone savages away at our health bars, but I manage to use a first aid kit just in time to save myself and Paul bandages himself up. He drives us inside the circle, and we both jump out of the car so we can patch ourselves up further - only to watch it start rolling down the hill we just ascended and back into the death field. Paul, less debilitated by laughter than I am, retrieves the car and drives up to level ground.

Despite some more questionable driving on my part we make it up to Minas, which perhaps unsurprisingly turns out to be a shithole. (I thought I'd taken a screenshot, but apparently I didn't - don't worry, you're not missing anything. Let's say my finger was obscuring the lens for the complete tourist experience.) I’m not bothered too much, because now it’s time for my secret ulterior motive for coming up here: extreme sports. I drive us over the mountain top, which perturbs Paul after our earlier antics - but we reach the bottom with our health bars and vehicle intact. 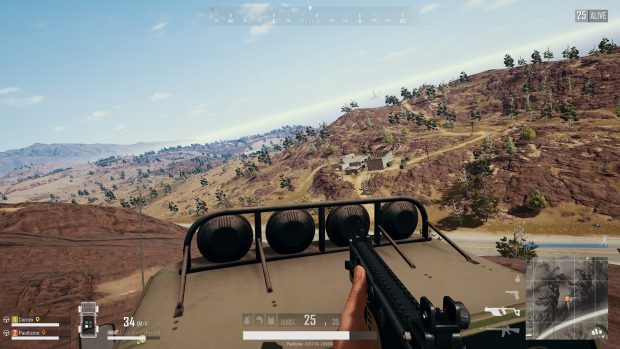 By this point there isn’t even a named location within the circle, but we ditch our car and run up a nearby hill so we can at least get a nice view of some scenic desert valleys. Also, there’s a sniper I reckon we can sneak up on.

Another duo drives their bike up to the bottom of the hill, and seems to have had the same idea. They start heading our way, but we’ve got the drop on them. Embarrassingly though, I forget to take my AKM off of single fire mode and land two shots on one of them before he turns round and tears through me with his SCAR. Paul falls a couple of seconds later.

We’ve got one more attempt, so I want to make the most of it. The plane has started in the north-west, which is as close as we’re ever going to get to the far western ruins that have been near the top of my bucket list. I decide that we should drop pretty hastily, but Paul seems to think that means he should drop straight down rather than gliding over to the ruins.

Not wanting to split up, I land close to him and start looking for a car. It’s a long time before I find one - there are only two vehicle spawn-points marked on my map; which I’m still using despite it having proved unreliable. I pick Paul up, and we speed off to the ruins despite that entailing a likely dip into the encroaching blue. 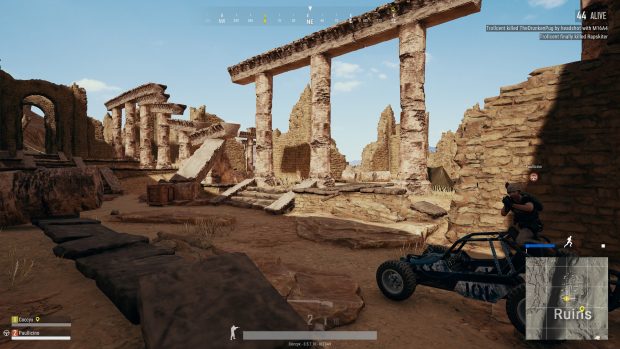 We actually make it with time to spare, and even manage to grab a little loot. At last, a sight worth seeing!

Once we’re back in the circle, I spot a crate falling from the sky and decide that it counts as an interesting local event that we can justify visiting. Let's pretend it's a festival. We’ve nearly reached it when Paul says he’s spotted an approaching car. I’m wary of trying to contest the crate because we’re so under-geared, though I do like the idea of trying to run them over.

My indecision results in me driving us in a circle a couple of times and then crashing, by which point it really is too late to do anything but leave. It’s only after we’ve driven away that Paul begins to doubt whether he actually saw a car at all, and only then that I realise I never actually heard an engine. Scared away by a trick of the light.

Going back really does seem silly at this point, so I instead take us on a driving tour through the nearby town of El Pozo.

As we roll down the main road, I remark that this place has seen better days. This prompts an angry local to start shooting at us, leaving me on a sliver of health. I drive on and it looks like we’ve escaped, but a smooth and stylish handbrake turn ploughs us into a telegraph pole. We’re finished off by the shooter’s teammate, who the killcam reveals had run up to the road to cut us off. 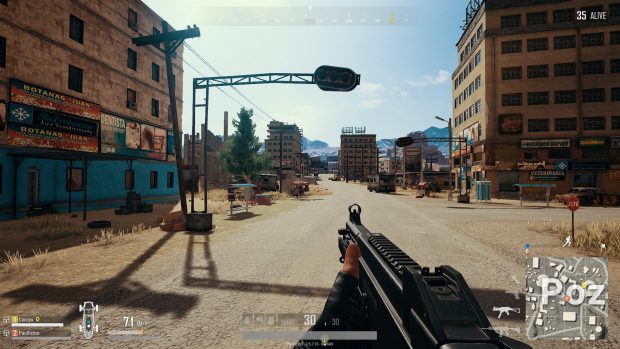 Well, that wasn’t the most impressive Playstyle Royale I’ve ever done. With one exception we died to the first people we saw every single round, my driving was atrocious and we barely made a dent in the places I wanted to visit - apart from the literal dents in the places I crashed into. It turns out that vacationing somewhere that has a constricting field of death and where everyone wants to kill you might not be the best idea after all.

If you’ve got a suggestion for the next article, pop it in the comments below.

Thanks for the screenshots, Paul!