What do you call a bunch of sixteen-year-olds skiving off school to play a tactical team-based shooter? G Siege-ees.

Wait, come back. I need to tell you about how the Rainbow Six Siege devs are invading Australia with Operation Burnt Horizon, the first event of Year Four. Early next month, you'll be running around a new map called Outback with two new aussie operators.

Ubisoft Montreal have also revealed how they're handling their next year of #content. As well as the expected eight new operators, we'll see three map redesigns, a newcomer queue to help ease in fresh players, and an anti-teamkilling system that makes would-be arseholes actually off themselves.

Outback will launch alongside two Aussie operators. One of them is an attacker that fires clusters of nasty looking spike traps, and the other is a defender packing creepy spider robots that can hack the attacker's drones. Here, listen to this man who knows far more about how they work than I do.

At yesterday's Invitational tournament, the devs mentioned that the test servers should go live today - so you should be able to to try them and Outback out pretty soon.

After Outback, those map redesigns will be spaced out through the three remaining seasons. It seems a shame that Siegers only get the one map that's completely fresh, but the little overhaul previews in the vid below do look drastic.

The devs are also adding reverse friendly fire, where bullets fired at a friendly teammate do damage to yourself. That activates after a player's first teamkill. It's a karmic approach to dealing with the problem that I'm surprised I haven't encountered before.

All of that sounds snazzy, but the newcomer playlist might be the best upcoming feature. With so many operators and maps to worry about after people have spent years getting good at Siege, a queue that's solely for people under level 50 sounds like a great idea. It'll only have three maps and one game mode, too, so hopefully won't be too overwhelming.

Most of the new info about the rest of the year can be found in the dev vid below, where people in an office walk about grinning at each other along to overly dramatic music. I haven't covered everything they do, so do have a gander if you want all the sweet sweet deets.

Here, have a handy little roadmap, too. Click to embiggen. 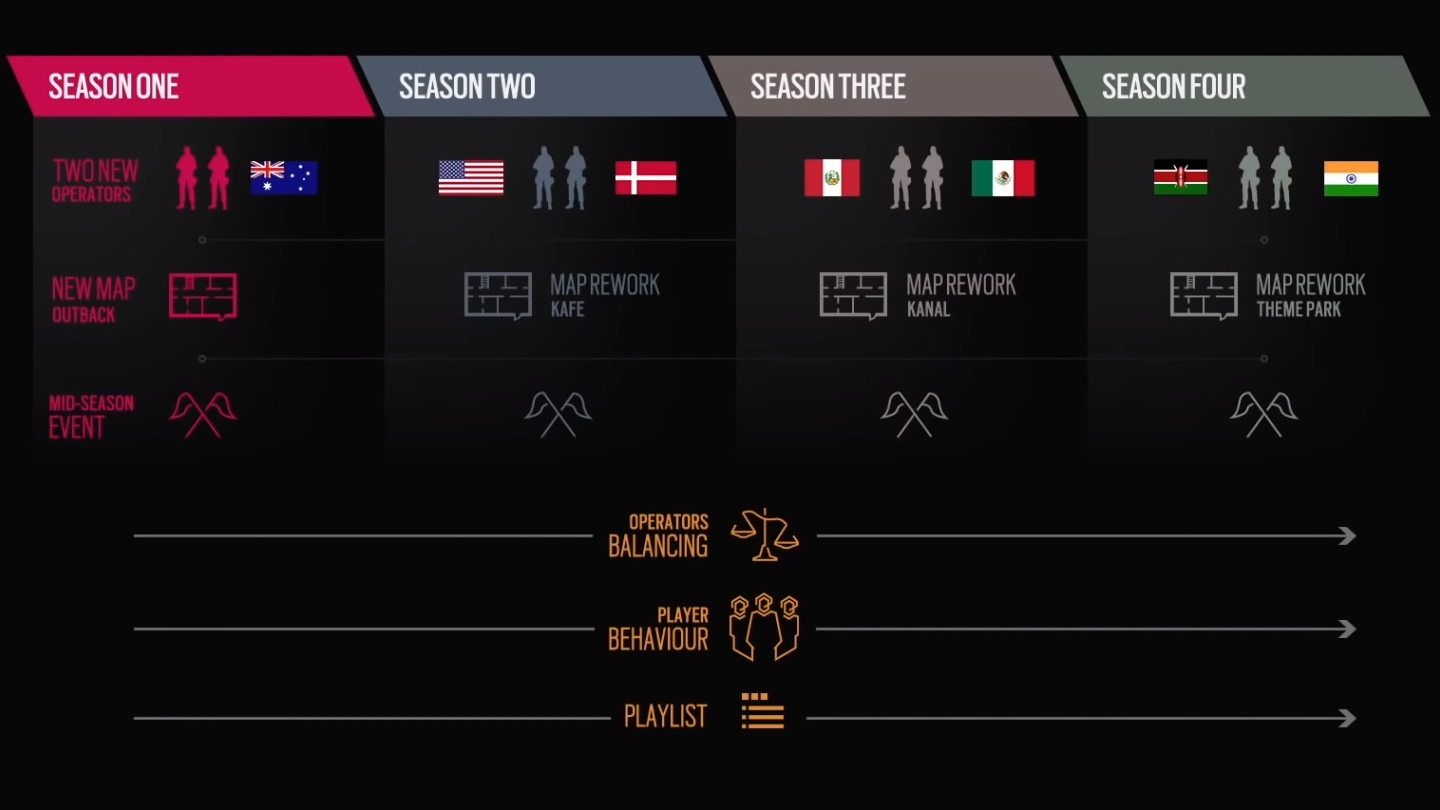 For a more complete picture, see this Reddit poster's recap of everything we learned in yesterday's livestream.

The timeframe for the features at the bottom of that roadmap is ambiguous, but if Ubisoft Montreal stick to their usual pattern then season one will kick off early next month.