If you click on a link and make a purchase we may receive a small commission. Read our editorial policy.
Developer: NetherRealm Studios, Qloc, Shiver
Publisher: Warner Bros.

It’s got blood and you punch people. There, review over.

I sometimes wish this job was as straightforward as that. Mortal Kombat 11 is a biff ‘em up of brutal strength and quick reflexes. It has a bin lorry’s worth of microtransaction trash heaped on top of it, the PC version is lagging behind the console version as regards patches, and it was made at a studio recently criticised for its poor working conditions. There’s also an excellent fighting game underneath all that. And knowing all this, I’m supposed to tell you whether its worth spending your paypacket on it, so you can pester other humans with fireballs from the far end of a fighting pit. I’m supposed to do that, from inside this laundry drum of hot takes and player anger. But all I can hear is my mother’s old adage, whispering to me from across the years. “Brendan,” she said. “There is no ethical konsumption under kapitalism.”

Okay, my mum never said that. She hated Ks and refused to use them. Let’s talk about the videogame.

It feels good to punch and kick. As a Tekken boy, I’m more used to side-stepping into the background to avoid mighty uppercuts, and leisurely holding back to block incoming high heels. A 2D fighter like Mortal Kombat is less complicated (in terms of giving you a much shorter list of moves to learn) but requires a mastery of spacing and timing that normally causes me to struggle. It’s full of the fighting game bollards that make these brutish games so intimidating, not to mention the jargon of the genre. There are jump-ins, breakaways, cancels, frame traps, damage scaling, amplifying, hits that are “safe on block” or “easily punished”. And while all of this comes naturally to the smiling bloodied and bruised, there is still that unavoidable fighting game climb for newcomers, or slow-knuckled wannabes like myself. 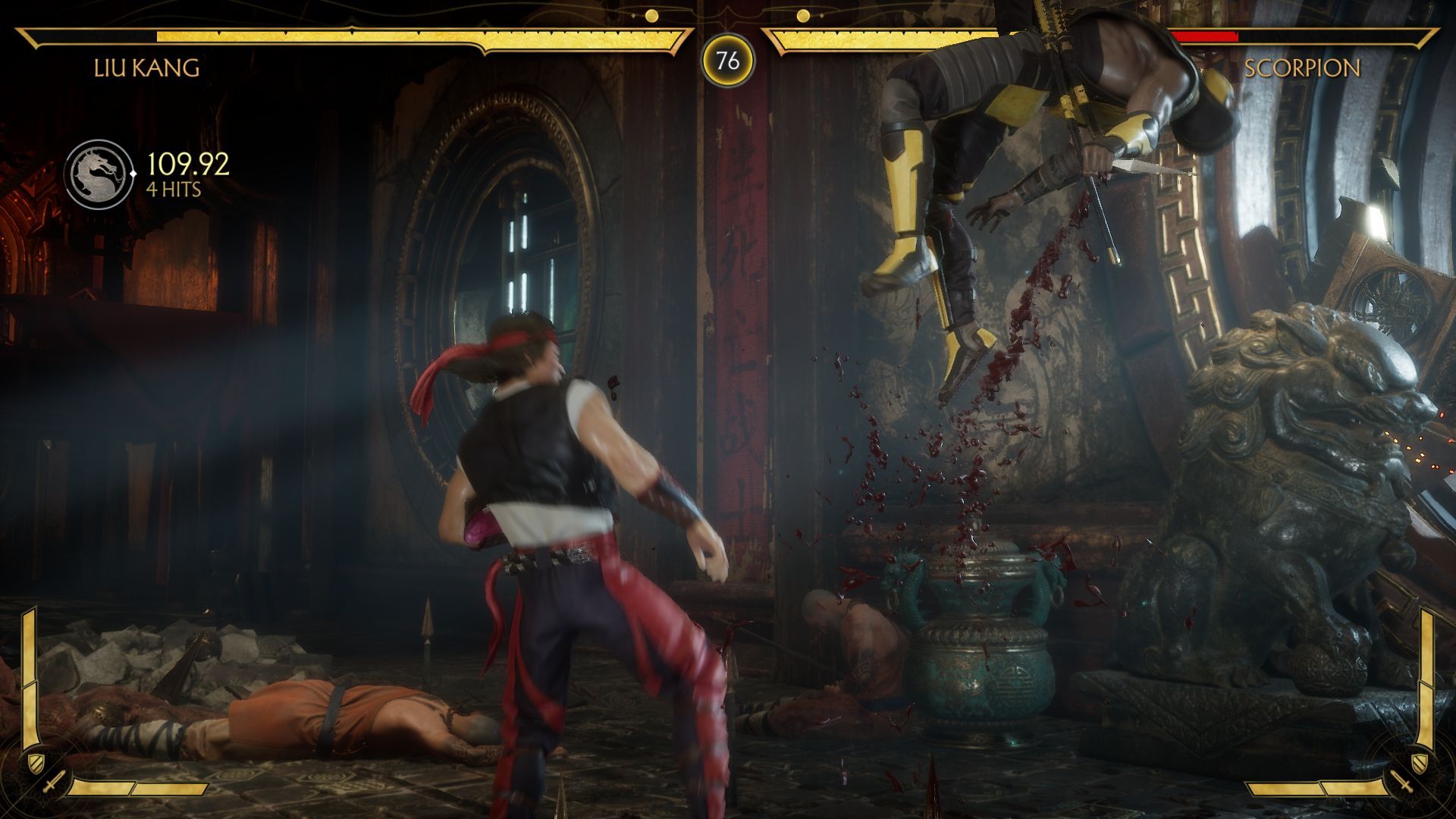 Which makes the big, chunky tutorial very helpful. It goes through everything, leaving no micro-quirk untouched. I will never be able to understand frames well enough to perform endless combos with panache, but it is nice that the game tries its best to explain these things. Each character has their own mini-tutorial, explaining the strengths of this floating deity or that lightning god in a way that even chumps can grasp. Although, there are a few lessons in the later tutorials that require scarily precise timing. It took me about 40 attempts to perform a “flawless block”, which involves hitting the block button in the exact millisecond your foe strikes. 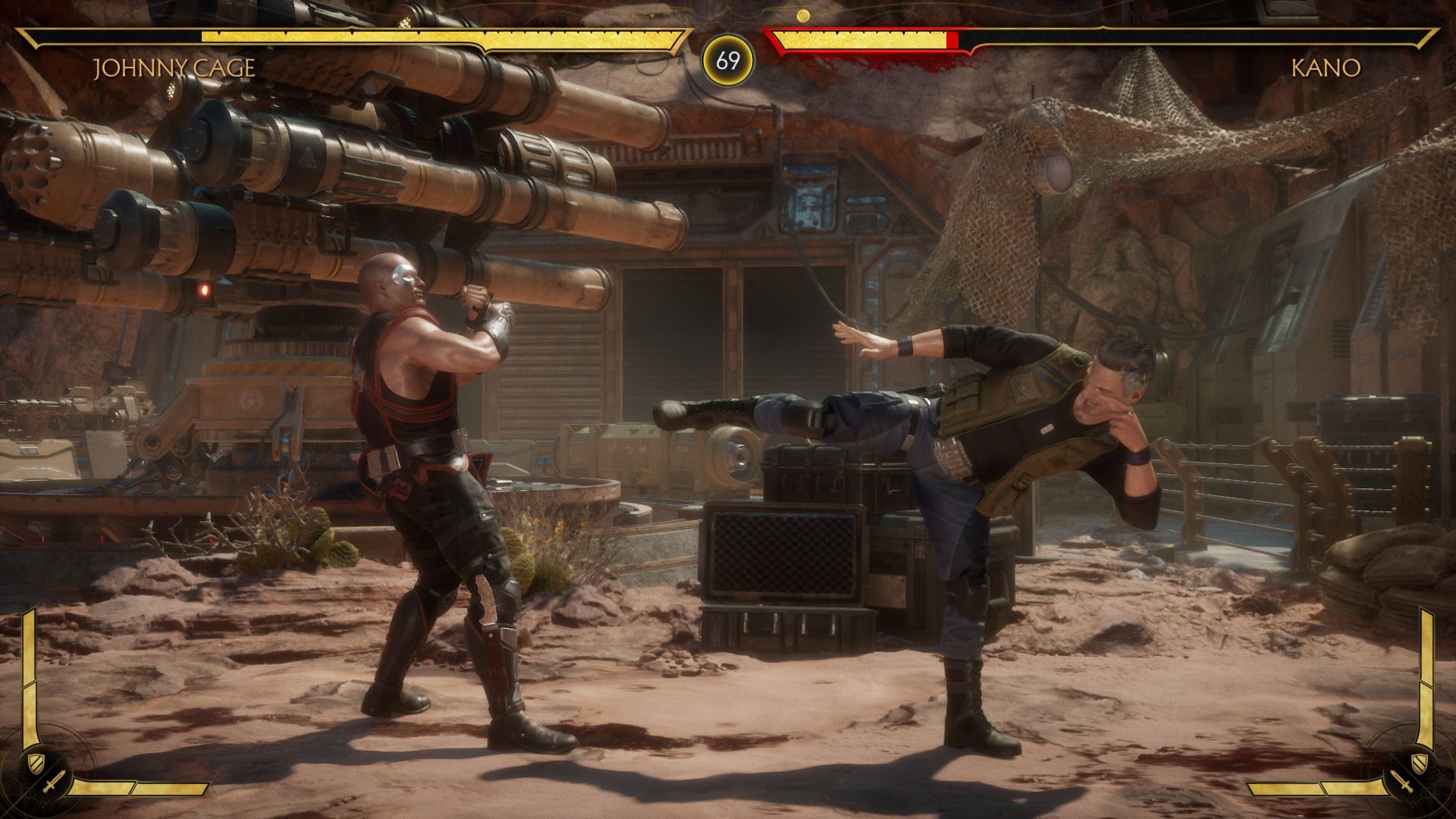 Those teaching aids and a willingness to learn (or re-learn) the ways of the 2D fighter means that the world of deadly fisticuffs will open up to even slow-witted Miguel players. The fighting is classic stuff: low kicks, high haymakers, projectile knives, jumping kicks, vicious grabs. That sacred temple of punch-thinking that requires you to anticipate more than react. Fighting random opponents online is the bilious viscera of the game, and the greatest satisfaction comes from finding a well-matched scrapper and finally understanding their tactics well enough to floor them round after round. Those times when you intuit that the cyber-eyed Kano in front of you will jump in for another airborne kick, and you pluck him out of the air with D’vorah’s insect ovipositors. Or snatch him from the sky with Raiden’s lightning stranglehold. These are the competitive highlights. Moments when you think “Gotcha!” and smirk like the cartoon character your hands are currently controlling. 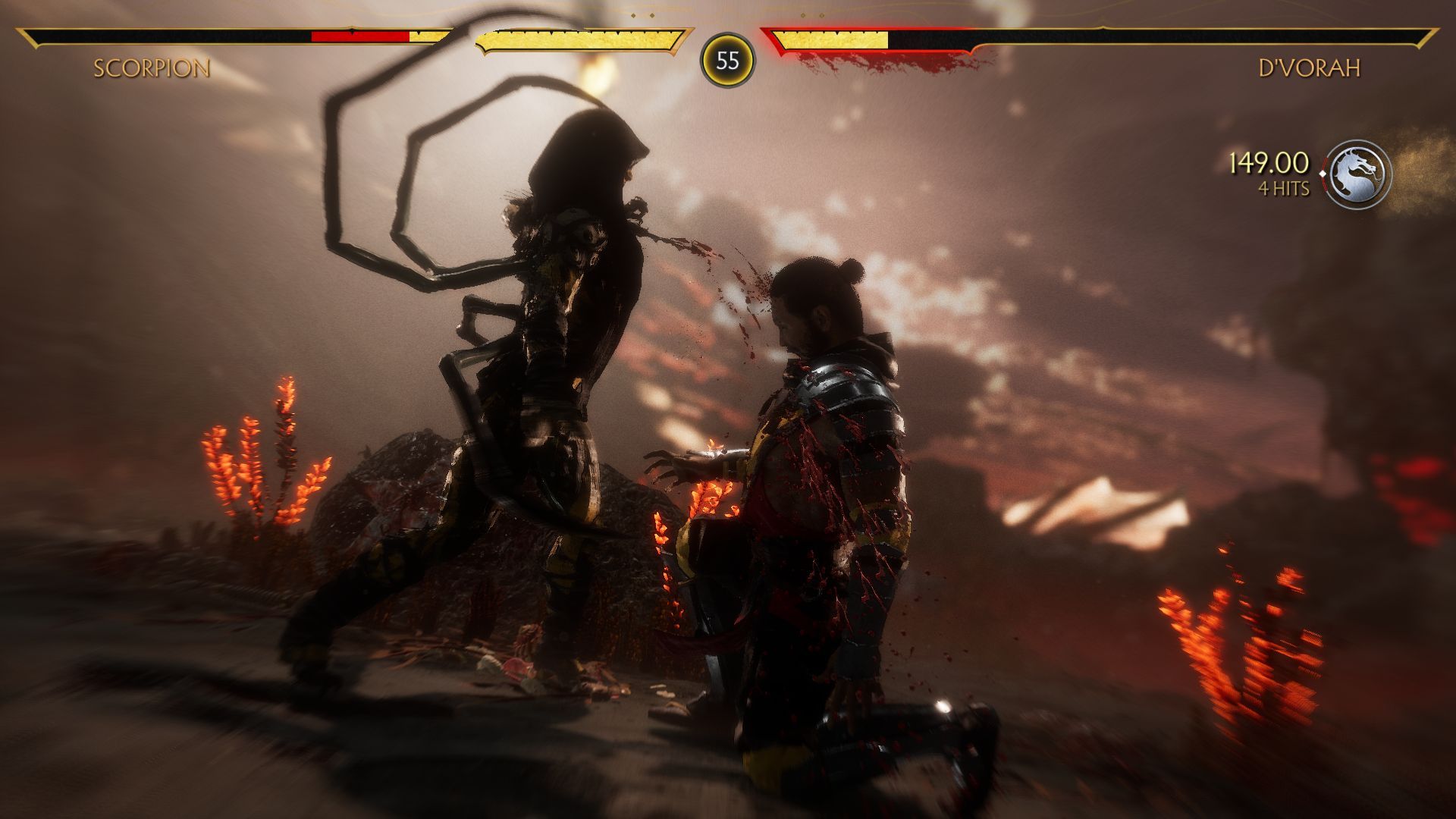 And they are cartoons. The story mode of this knuckledust ‘em up may be impeccably animated and packed with impressively choreographed fight scenes (surprisingly long cinematics between matches) but it is a stupid kung-fu fantasy, not a drama. It is mostly a story about time-travel. A big bad lady has brought the “past” versions of the heroes and villains into the present. It's full of idiotic dialogue that assumes knowledge of the whole Mortal Kombat saga while simultaneously trying to force-feed you as much exposition as possible. A lore-feast for fans and an indecipherable rollercoaster of name-dropping for lapsed or new players.

Those cinematics between fights at least have enough action movie dumbassery to elicit frequent snorts of laughter. And there is the rare moment of scripted comedy, such as in the confrontation between an older, wiser Johnny Cage and his toxic, numbskull younger self. But more often the comedy is unintentional, embedded in dialogue that I am unfortunately required to describe as korny with a K. “Empress!" shouts one brawler. "The Earthrealmers have captured the bone temple!” Another exclaims with disbelief when they see a revived enemy: “But you were killed! Swallowed in a storm of souls!” 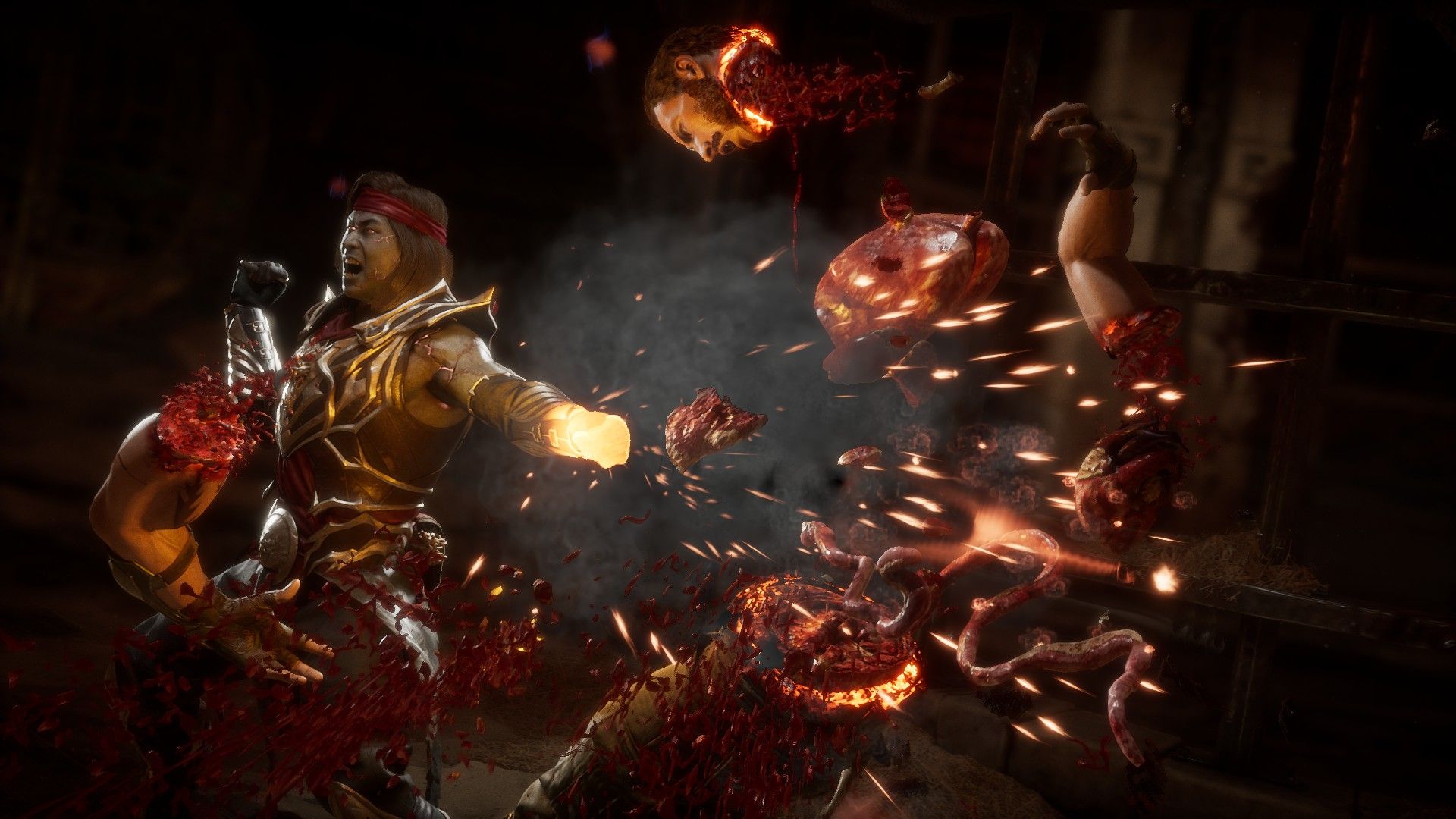 Silly lines like this can redeem anything that is honest about its own stupid nature. Just as I am happy to be called a lowly ephemeral speck by a giant ice eel in Final Fantasy XV, so am I content to hear a robotic pantomime villain of the Kombatverse shout: “We require additional candidates for Cyberization!”

But it's not exactly artful storytelling. The script of this fighting game is what would result if you let twenty WWE wrestlers write the next Marvel movie. That summary will probably signal whether you’ll enjoy it for the big dumb spectacle it manages to be through sheer force of its own imbecility, or whether you'll dismiss it for the derivative idiot theatre it is. A conflict between a regretful present-day Jax and the gung-ho Jax of the past is the only thing resembling character development in this throwaway story of mirror matches. But even that is reduced in the end to some anime side-switching. 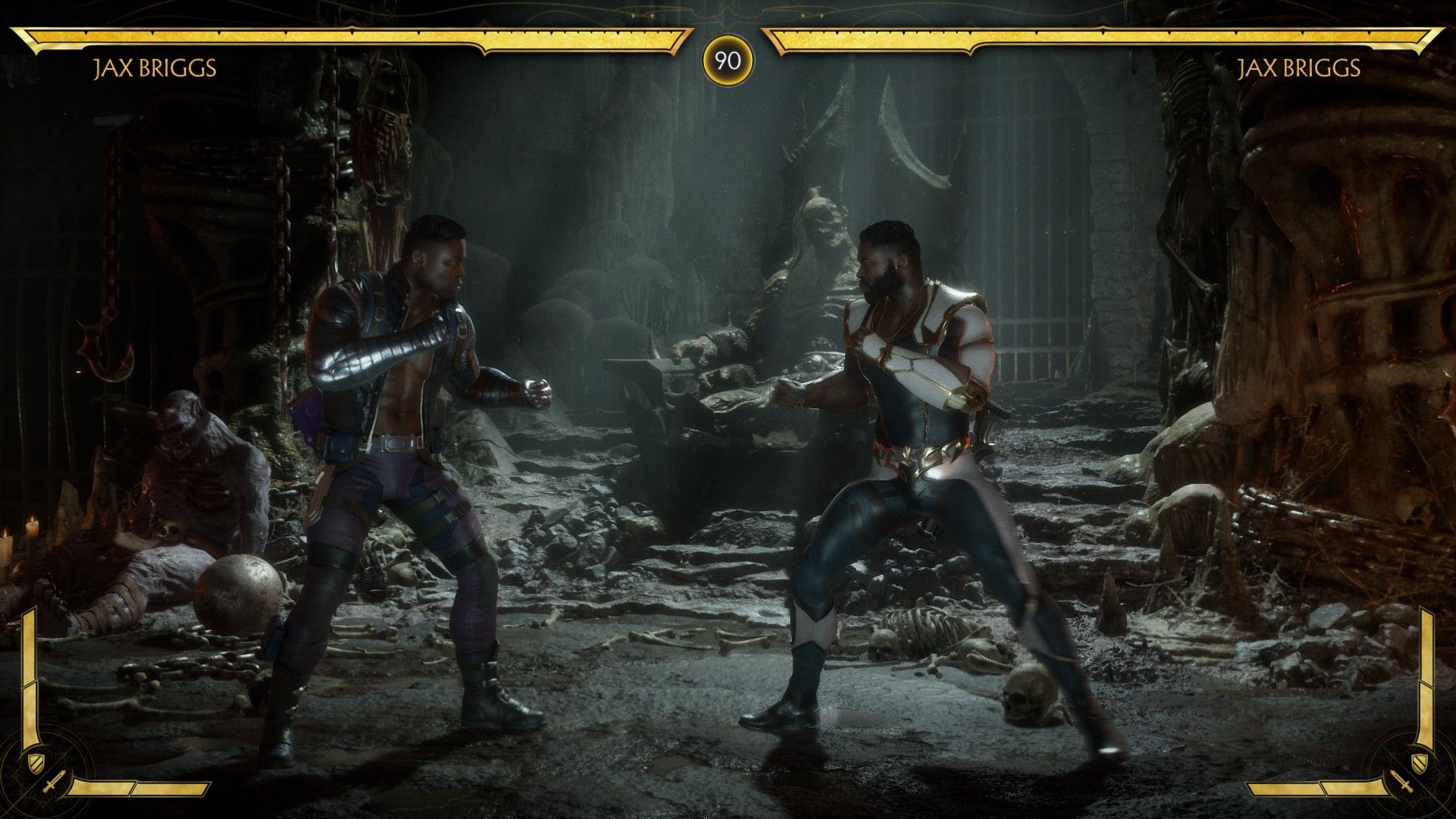 And that’s it really, it’s hard to care about anybody else. Where some might see an epic story of betrayal, I see a tale no more complex than two children playing with their action figures, squabbling with all the dramatic irony of an episode of Beast Wars. At the end of every fight, the heroes dust themselves off and leave their murderous opponents knocked out, yet alive. For a game so drenched in gore, so steadfast in the visual motif of murder, this reluctance to truly kill its characters renders the whole adventure laughably pointless. It’s a bad superhero movie without the popcorn.

Maybe I’m being too harsh. This is about fighting, and the fight is mostly online. In any case, history has taught us that a rejected Avengers plot is about as much as we should hope for in a game that is about pressing Y, Y, X + A before your opponent can press down, left, X. And for all my snootiness, the story mode is definitely one of the biffer’s least aggravating features. I’m not talking about Mortal Kombat's habit of stuffing its menu screens with more Ks than a Basque roadsign. No. The true enemy comes in the form of that dreaded elder god: Mikrotransactions. 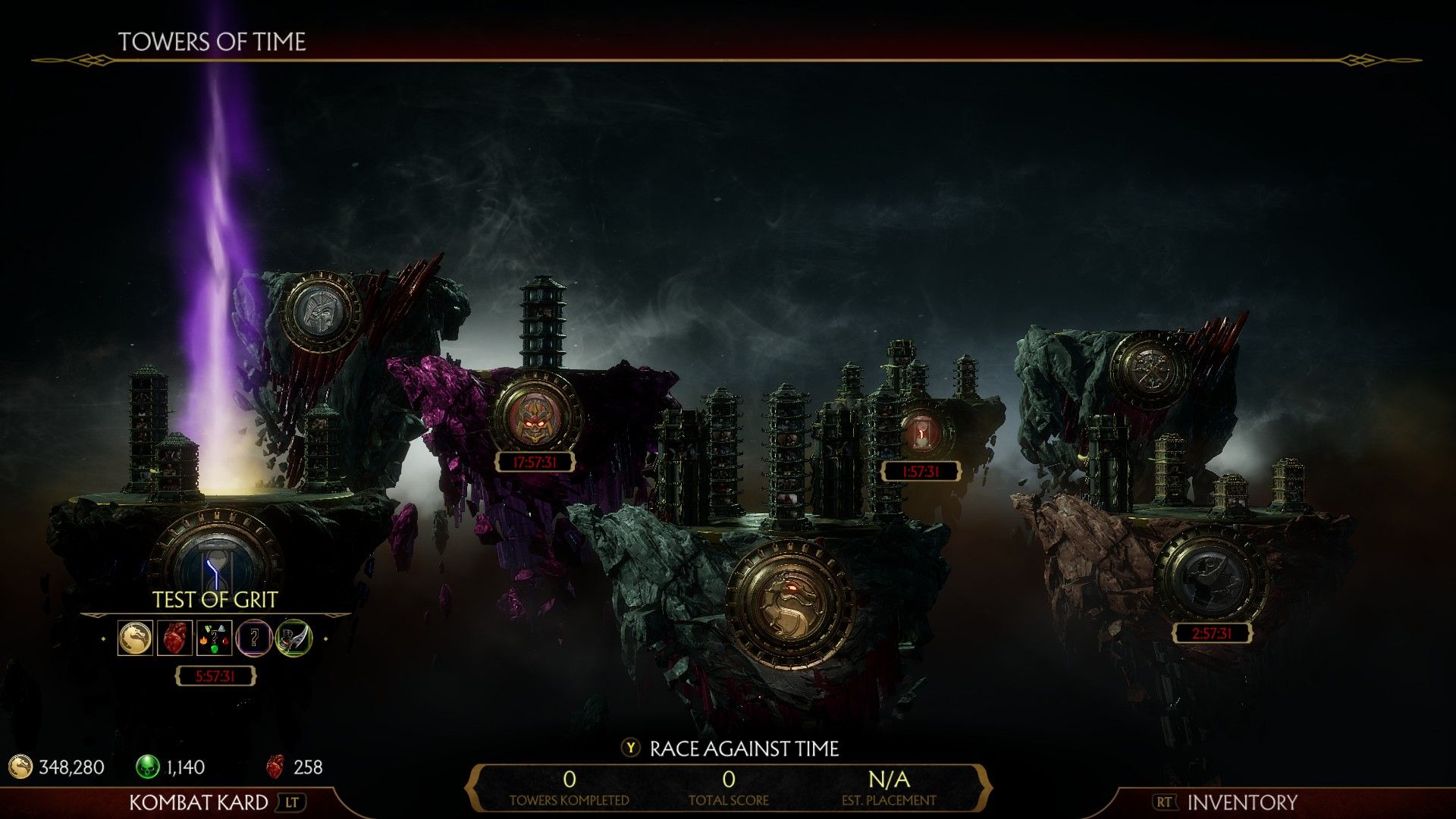 You’ve got all the usual offenders here. A vom bucket full of multi-coloured currencies. A Scrooge-like hesitance to reward the player with anything worth having. And a stingy, petty Towers of Time arcade mode that turns the good idea of a “daily challenge” into grindy buffoonery. Many of the cosmetic skins for your favourite fighters are unlocked by playing this mode (essentially a bunch of fights in a row). But it is a chore, filled with “modifiers” that turn what would be great fights into irksome scraps that feel unfair. One of the most annoying recurrences are the blood missiles. These are projectiles that appear out of the walls and interrupt your moves, but don’t affect your computer-controlled opponent. You’re encouraged to use “konsumables” to even the odds, effectively introducing yet another form of currency which must be slowly earned and deployed mid-battle. NetherRealm have basically invented a fighting tax. 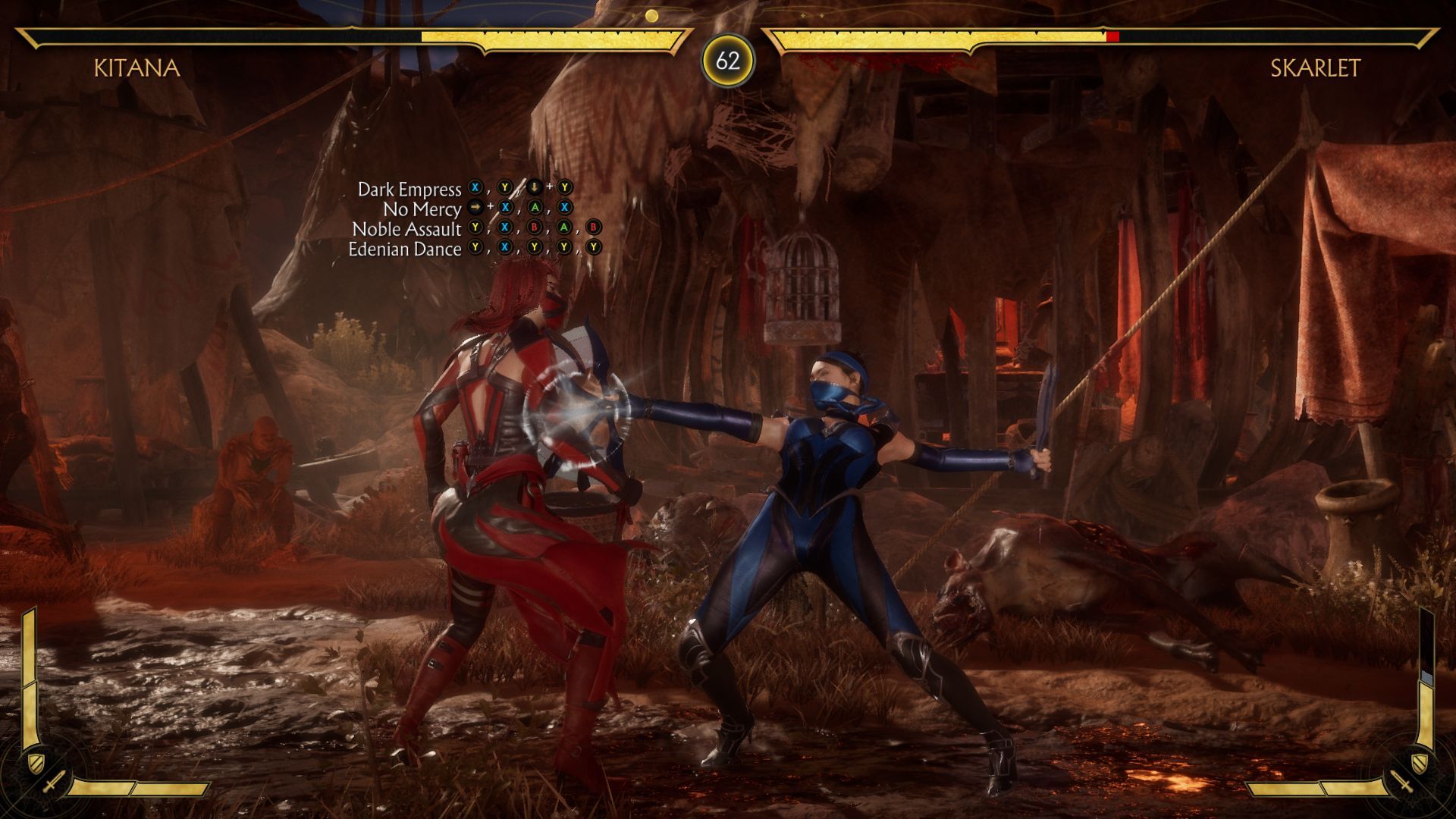 The studio has promised adjustments to this mode (some may have already been patched in by the time you read this). But I’ve yet to feel the benefit. That sense of dissatisfaction leaves a reviewer in that old laundry drum of morality. I should probably be out on the cyber-streets demanding improvements. What do we want? More costume unlocks! When do we want them? After you nerf the Towers! But that means yet more work for the developers, and then I’d have to face the other problem of Mortal Kombat 11: the recent reports that its studio is a harsh place to work, a place of unhealthy working practices and months of unhealthy overtime. Crunch, in other words. But they'd probably spell it "Krunch". 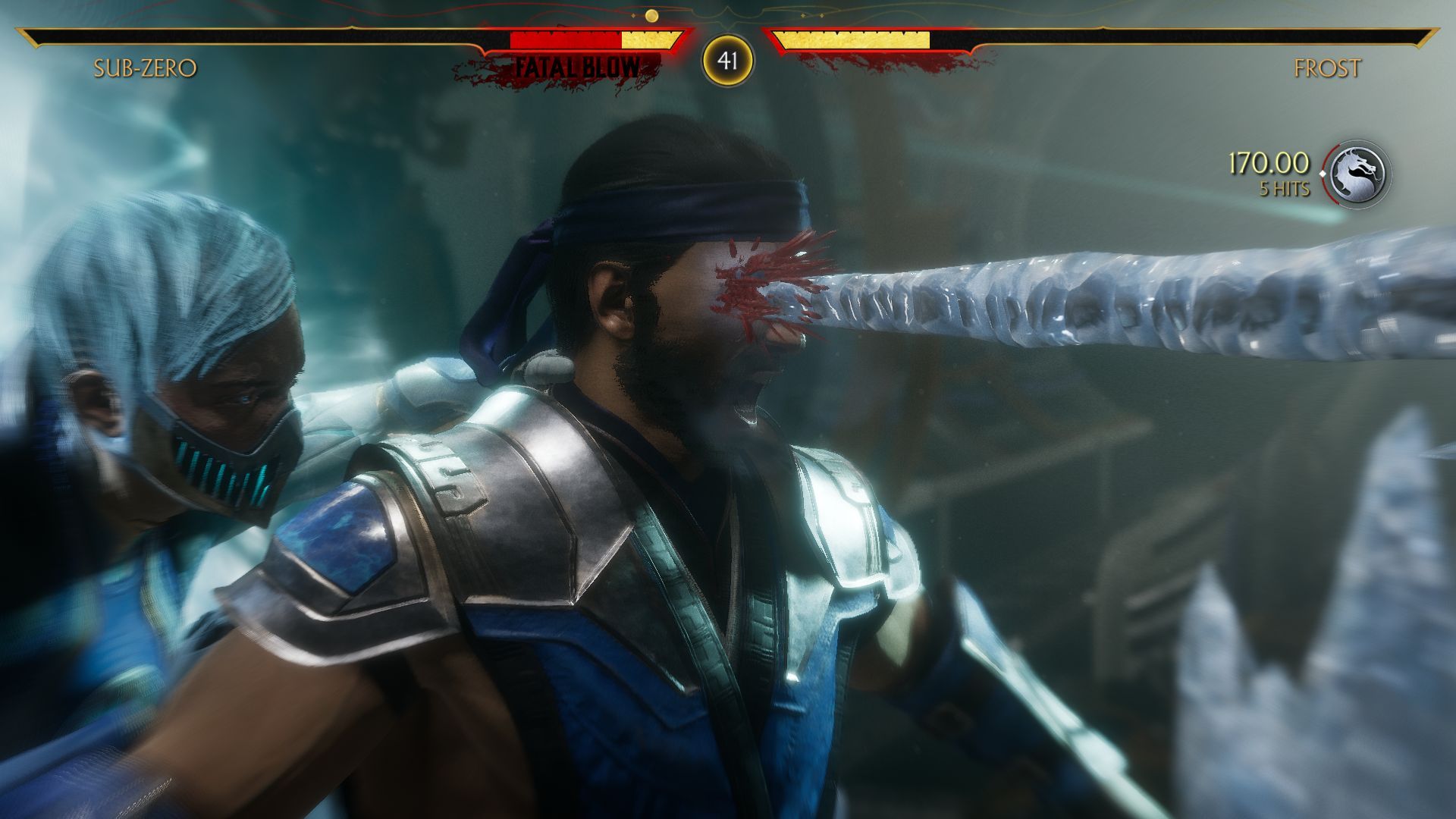 And that’s my laundry drum. I could recommend this game, suspecting it was likely made under those same conditions. But then I might be called a scab, or an idiot with no idea of solidarity. I could also say “I don’t recommend this game”. At which point I’m being dishonest, because despite the hokey story and the tight-arsed rewards, I thoroughly enjoy all the fist-fighting and flaming dragons and insect swarms and bicycle kicks. I get a thrill from shattering the jaw of an online rival, and a weird happiness from having that unknown rival play 10 more matches with me because we’re somehow on the same level. This is a remarkably good fighting game, and it feels like a disservice to the craftsmanship of its creators not to acknowledge that. Mortal Kombat 11: it’s got blood and you punch things. Review over, right?

Well, sort of. I’ve got no more words to write. I only want to repeat that we reviewers often can’t function as a buyer’s guide, even for games as straightforward as a fist to the face. I can only tell you what I know, and what I think. Buy this game if you want. Hell, you probably already have. I’m just here to nitpick and dropkick. It’s like my mum used to say. “Be a kritic, Brendy, not a konsumer guide.”