If you click on a link and make a purchase we may receive a small commission. Read our editorial policy.
Romancing The Code is a regular series (although it's been a while) where Alice Bee writes about the different ways games make us fall in love, without the actual sex bit.

A couple of weeks ago I was at GDC, surrounded by hundreds of people talking about the present and future of games. So it made sense, in my mind, to play Leisure Suit Larry 1 (aka Leisure Suit Larry In The Land Of The Lounge Lizards). I’ve wanted to do this for some time because people, people writing for this very website, no less, have done a lot of work to defend the fact that they like it. Like, I don't care, you can just like it. But protest too much, perhaps?

It’s an adult sex comedy adventure game from the 80s, but Larry’s games are “comedies about sex”. Or possibly they’re not even really about sex at all, but about the search for something more meaningful. Forget what your kneejerk reaction is! The original Leisure Suit Larry trilogy is about finding true love!

The evidence cited for this is usually the ‘hooker’ scene. Go on, then. Convince me. 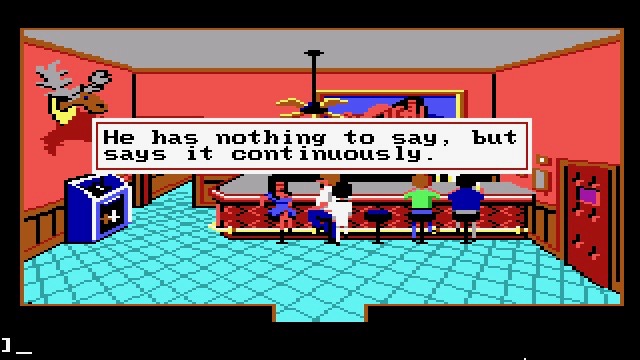 When you begin you’re led to believe that Larry, who is 38, desires nothing more in his blocky, pixely heart than to get his end away. I booted up the original version rather than the Kickstarted ‘Reloaded’ one, to get that pure, unadulterated Larry experience. On one level I understand what people found interesting about it. I got run over immediately by walking into the street without realising, because when you press an arrow key, Larry will keep walking in that direction until he hits something, or you pick another direction. Or a car hits you. When Larry dies there’s a pretty cool scene where a behind-the-scenes Sierra crew have to put together a new version of him from a production line. Heh.

To my modern sensibilities figuring out text-based controls are kind of a puzzle in themselves. I spent ages trying to open the door because I thought ‘open door’ would be somehow too complicated as an instruction. Text commands give you more freedom to experiment, in some ways. You can put stuff in for shits and gigs to see if the developers anticipated different kinds of smartassery. 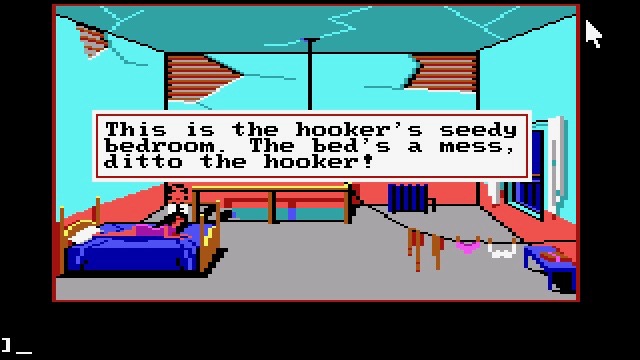 I agree that Leisure Suit Larry is not about sex, because almost immediately I started looking at it as a series of blocks I was pushing around. Not because it’s made of squares, but because that’s what the game amounts to. OPEN DOOR. LOOK AT TABLE. PICK UP ROSE. USE JUKEBOX. It’s mechanical. It’s Tetris. From what I understand, this is how the depressed peacocks that call themselves "pick-up artists" think of it as well.

I was very pleased with myself when I figured out CALL TAXI. I tried to go home, because it struck me that this would be the best thing Larry could do. Go home, watch Queer Eye, eat some Monster Munch. Just chill out mate. Learn to love yourself. But that instruction just deposited Larry in the Sierra factory again. The poor bastard has no escape.

Back at Lefty’s it is, then. A dive bar with four rooms and a sex worker living over it. Lefty must know she’s there. Does he take a cut, as well as her pimp? The peculiar logic of adventure games makes everyone in here weird. A woman at the bar is going out with the drunk dude collapsed outside the bathroom. He has the remote control that works the pimp’s TV. Is it a universal remote that he carries around with him? Because if it isn’t, it must mean that he’s been to the back room, right? Dude, your girlfriend is right there. 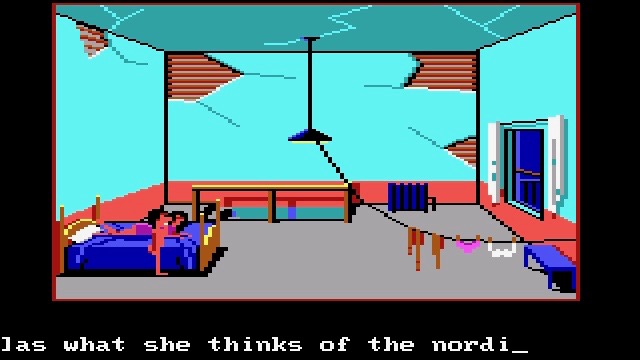 You can sneak past the pimp really easily and go upstairs. This is, apparently, where the sex worker lives. Her underwear is on a washing line strung across the room. I tried to talk to her, but she didn’t want to have conversation. I don't really want to type HAVE SEX, and I kind of hope it doesn't work, but it does. Ah yes, of course.

After finishing, Larry has the revelation that fucking a sex worker in the secret upstairs room of a bar was a shallow experience. He wanted something meaningful, godammit! So I left out of the window. But before I got very far, Larry’s crotch started flashing like a traffic light, and I was informed that I’d gotten more than I’d bargained for from the sex worker. Larry decided that life ‘wasn’t worth living’ at this point. Back to the Sierra factory again. In a way, Larry is a victim here.

I looked up a walkthrough, because frankly I couldn’t be arsed with this, and found out I had to go to the shop to buy a condom. The shop was… a trip. 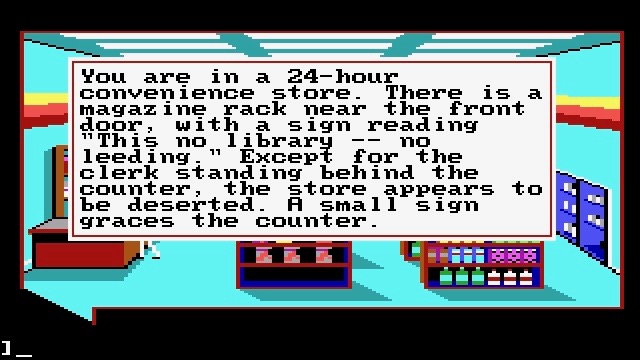 I discovered that the game forced me to pay the cab driver after he dropped me off anywhere. I visited the sex worker again and, being careful to use a condom this time, and having read the same revelation about wanting real love, tried paying her afterwards. Apparently this was something that Al Lowe hadn’t expected anyone to try.

Forgive me, but I don’t see this interaction as evidence that Larry isn’t just a gross sex comedy. It does not make Larry a more sympathetic character to me. It does not make me think that this game could be about romance and love. I can’t talk to the sex worker. I can’t ask her about things that might be interesting to her. I can’t even pay her for doing her actual job. But I have to pay the cab driver. 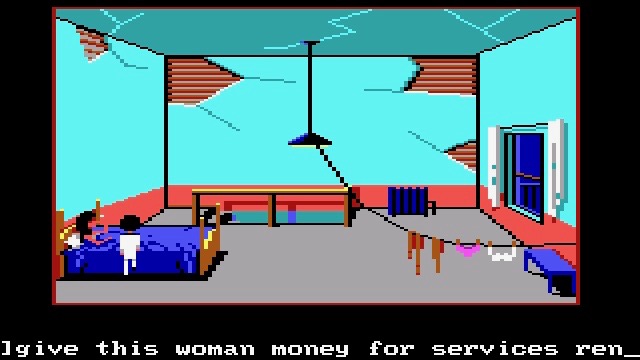 Ah yes, Larry is about love because... why again? There’s some candy in the sex worker's room that the player can just take. Afterwards, I accidentally got Larry run over by a car again. Then I turned it off.