I’ve been alive for about 2 minutes, and the first player I’ve met in Rust has just chucked a pair of severed human arms at my feet.

“I found them on a corpse just over there. I...may have killed him. But then I wasn’t hungry, so you can have them. Here’s some animal fat too.”

Rust is a strange game.

It’s a multiplayer survive’em up where you spawn on a beach with nothing but a rock and a torch to your name. Once you’ve gathered the right materials and built up a base, you can eventually craft guns, traps and explosives with which to torment your fellow Rusters - about 250 of them, if you play on the standard-sized servers.

You probably already knew most of that, because we’ve been writing about Rust for almost half a decade, but now that it has finally launched for realsies I'm here to tell you wot we really think. The transition to a full release wasn’t marked by a particularly big update - as this blog post explains in greater detail, Rust may no longer be 'officially' an early access game and has gained a bigger price tag, but development continues “as usual”. The main feature of the launch day update was a visual overhaul, along with a starting task list that provides some direction when you first spawn in.

Rust is good at generating strange anecdotes, as well as thought-provoking articles about the nature of society and morality. But just as a game, as something that’s meant to be fun to sit down and play… well, your mileage may vary.

I’ve spent most of my time in Rust dealing not with other people, but with survival mechanics. Managing hunger and thirst meters while gathering mundane materials might have enticed me once, but in 2018 I can’t help but balk at the prospect of hitting a tree with a rock until wood falls out. 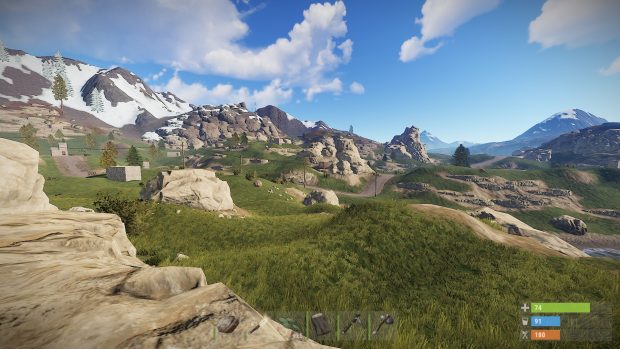 I spent most of my first few hours with Rust (though I did play a bit several years ago) roaming the island until I died from hunger, or at the hands of fellow survivors who I risked approaching just in case they’d feed me. Sometimes I would find a wild animal to slaughter - but they’re rare, and often ended up slaughtering me instead. When I did manage to avoid starvation and gather enough materials for a base, I’d get shot in the back of the head and have to start over from scratch.

I said the other day that Rust is a game that’s defined by its harshness, and I stand by that. The thing is, it’s that harshness that makes eventual success rewarding. It’s a similar deal to the one everyone makes with Playerunknown’s Battlegrounds. Much of the time, you’re going to be screwed over by factors that are outside of your control. As bitter as that can be, it means that overcoming the odds generates a sense of achievement that wouldn’t otherwise be possible. 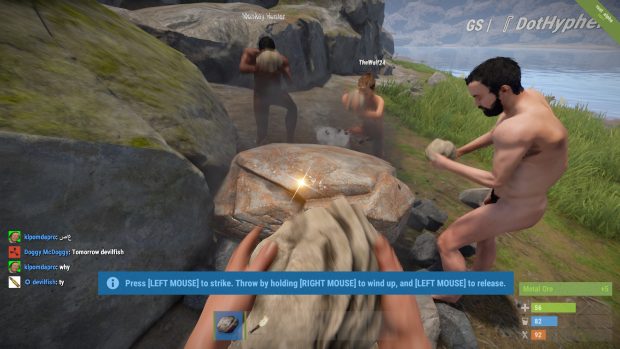 Let’s be clear though: the Rust deal is not as good as the one that Plunkbat offers. In an attempt to make chopping down trees and smashing up rocks a little more interesting, there are markers that you can aim at to accelerate the process. Those markers definitely help, but there’s no escaping the fact that gathering mundane resources is a fundamentally boring task. In the wake of Subnautica, which has you collecting strange alien flora and fauna while keeping an eye out for predators, how could collecting piles of wood by pummeling trees with a rock not feel lacking?

There are predators in Rust too of, course, only here they’re usually bipedal, naked, and shouting insults about your mum.

Not everyone is like that, sure, though you will meet a lot of children - both the literal sort, and adults that behave like them. Yet as unpleasant as some of those encounters will be, they’re part of what make Rust worth playing. Usually, people will just kill you on sight, but not always. Sometimes you can steer your attacker off their murderous path, and the joy of playing that game, the social one, goes a long way towards making up for the monotony of the resource gathering one. 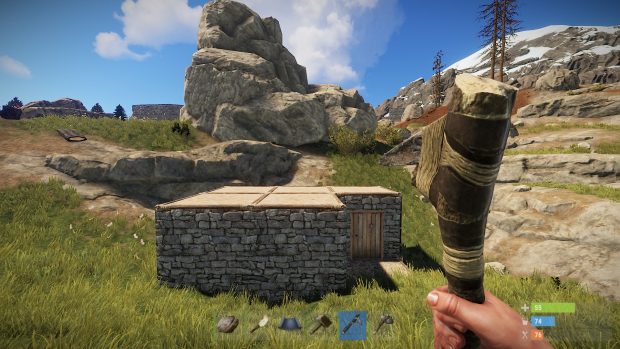 Playing the “how to convince this person not to kill me” game is great, because 1) observing people’s behaviour can be super interesting and 2) thinking up ways to manipulate that behaviour can be even more so. Bear with me on this, but I’m reminded of Opus Magnum, a puzzle game about using programming-like logic to build alchemical gizmos. What makes Opus Magnum a great game is how you have to invent your own solution to each problem, and come away feeling creative and clever.

Rust is, a little bit, like playing Opus Magnum with people. Something that the best board games recognise, but rarely video games, is that the humans playing them are their most interesting components. When you’re interacting with a person rather than a lifeless system, you can be inventive in ways that transcend typical puzzle solving.

I mean, this is a game where singing “Why Can’t We Be Friends” can be a useful defense mechanism. Employing that tactic, I’ve made people laugh and stop trying to shoot me - or at least help me back to feet after they have shot me. One bloke didn’t stop stabbing me, but he did start singing “Another One Bites the Dust” in retaliation.

Another time, while I lay bleeding on the ground, I launched into an am-dram soliloquy about the cruel earth and the murderous foes that stalk upon it. My attacker came over and said sorry, helped me to my feet, then gave me a pistol by ways of apology.

I don’t particularly enjoy the hassle of base building, but I do like how setting up in an area affects the dynamic between you and your new neighbours. I convinced an aggressive player to stop attacking me after I pointed out that we lived next to each other, and shouldn’t get into a feud. I had no weapons with which to fuel such feuding, but he didn’t know that. 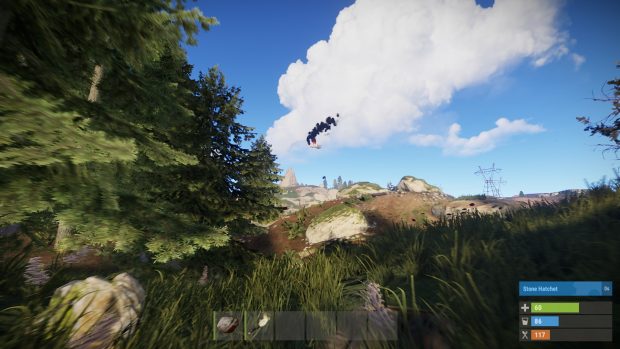 It’s those relationships that have got me invested in the bases I’ve built, over and above the attachment gleaned from simply putting effort into something. I’ve taken to making friends with my neighbours whenever possible, though I always grow my cloth-producing hemp under my house so they’re less likely to nab it. Lord knows I steal enough of theirs - I don’t typically attack people, but I’ll happily nick their stuff.

In one game though, that changed. I’d progressed to the point where I needed to build a furnace, and to craft it I needed an ungodly amount of animal fat. Furnaces allow you to smelt metal ore, and metal is a component of most advanced blueprints. Given the rarity of wild animals, I realised I’d have to turn to another source for my fat.

The first person I killed had just given me some mushrooms, an act of generosity that didn’t help with the guilt at all. The others that I slew were silent, all busy gathering resources when my spear slid through their backs.

It’s made me wonder if the amount of fat you need for a furnace has been set deliberately high, so that once you’ve been playing for a while you’ve got an extra incentive to be murderous. Again, there’s that harshness: you either become a misery to other players, or take a much longer route to acquiring the stuff you want. 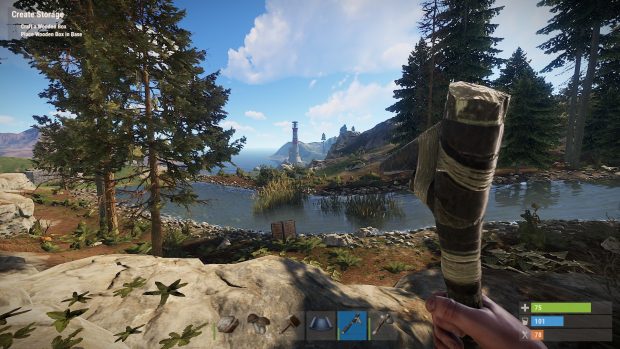 Player hunting offers a shortcut past boring gathering, and if I look at that through the right lens the dullness almost becomes part of the game’s appeal. The more obstacles that are in the way of cooperation, the more tempting it is to stab someone in the back, and the more meaningful it is when two players manage to restrain themselves.

Except that doesn’t really work, because playing aggressively still involves a lot of chopping up trees and smashing up rocks - just with opportunistic killing sprinkled in. At the end of the day, I only have the patience to put up with that grind for a certain length of time. I can marvel at the fortresses other survivors spend hour upon hour toiling away at, but I can’t face the hassle of building one myself.

I should also emphasise that for every memorable interaction you’ll have with another player, there’ll be many where you’re just killed. Rust is a strange, harsh game that’s worth exploring - but only certain parts of it, and only for so long. I’ll never commit to constructing my own fortress, but I’ll happily knock on the door of one belonging to another player.

Maybe I can convince them to let me in.

Rust is out now and available for Windows, Mac and Linux via Steam for £27.79.