Political games are picking up traction, with Papers Please and Beholder being among my favorite indies from the last couple years. A new game published by Mike Rose's No More Robots (Descenders, Hypnospace Outlaw) combines those influences with some bit-art and the current political hellscape into a Brexit simulator. I'm exceptionally excited for the impending release of Not Tonight because I love when video games hurt me.

In Not Tonight, you play a "bouncer" in an alternative (ish) post-Brexit Britain where some very bad people have come into power. In a gig-based economy, you travel between various, pubs, clubs, and festivals in order to help determine who is allowed in. As a bouncer, you'll be responsible for checking IDs and following any other rules the location has regarding who is let in and who is not. Following the rules and doing a good job allows you to upgrade your life and even your body. And that personal success probably comes at the expense of the people around you and the future of the country itself.

Also, you might notice that Brexit was a bad dumb idea and it will doom us all. That's just some bonus facts.

Via the game's Steam page, a recent update reveals that the beta test period resulted in four or five star reviews from 85% of the players, so the game is clearly on the right track. Here's the results of what the team took away from player feedback and what they're focusing on before the final release: 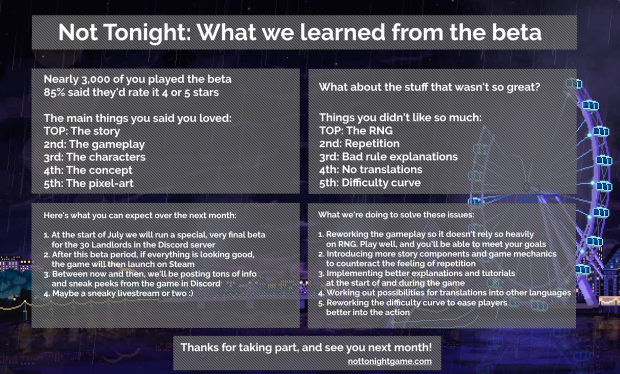 We need a name for the genre of games where you sell out the people around you to an oppressive government in order to further your own self-interest? Paperslikes? Whatever. This looks like a bleak time albeit a bleak time I'm going to replay a bunch of different ways. This is also the second near future gig-economy game I've written about today, and I love that games right now are being made by people who have had to suffer through freelance work their entire life and are as bitter about it as we should be bitter about it.

I'm also looking forward to the inevitable sequel Not Tomorrow Either about what we messed up in America where you wind up working atop a large, stupid fence. Like a more racist version of Game of Throne's Night Watch. With more cheap red hats that were made in China.

Check out the trailer here:

Again, the Steam page is here, and the game is headed for release as early as next month.

There's also an official Discord server you can join by clicking here which has exclusive information and content about the game's development. That Discord looks... fun.

Over the last 24 hours, the Not Tonight community has been trying to work out which of them were spies sent to steal government secrets. Building this Discord server has been some of the most fun I have had working in video games https://t.co/pdrdiOnOF7 pic.twitter.com/iHQu38PtIl