What happens to the gig economy once capitalism destroys us all? Well, that's what Neo Cab sets out to answer. You play as one of the last Uber drivers is a shiny dystopia where you've got to keep your feelings from exploding while you engage in a quest to save someone close to you. Managing the emotional needs of your passengers along the way, and becoming invested in their lives, are the parts of the gig that you probably won't be compensated for. Outside of your in-app star rating. (Which, let's be clear, gives me enough stress in the current dystopian world. How bad does someone have to be before I give them less than five stars? To we have to have a head-on collision? What is my star rating less than 5.0? Who did I murder?)

We've got an E3 trailer for Neo Cab to share with you.

This is one of those titles I keep checking in on because, even though it is in early development, it just looks like everything I want from a game. And the art style keeps developing to match.

Neo Cab is an emotional survival game about staying human in a world disrupted by automation. You play as Lina, the last human driver on the neon-drenched streets of Los Ojos. When your friend and only lifeline mysteriously vanishes, you'll need to use wits and empathy to survive. Choose your passengers— and your words— wisely. If you can balance your cash, star rating and emotional health, you might just keep your job long enough to find her. 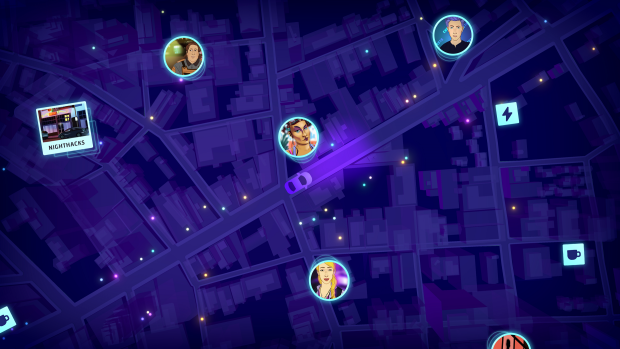 There's a diverse cast of characters and unique mechanics including branching stories, an in-game economy, and an emotion system that promises to be completely original. The city is procedurally generated, and contains plenty of random encounters and discoverable items. Obfusc (Monument Valley) did the soundtrack, and the noir arcs were created and written by Leigh Alexander, Kim Belair, Bruno Dias, Duncan Fyfe, Paula Rogers & Robin Sloan.

What a cool visual way to engage in a story driven adventure. I want it now. If anyone from the Chance Agency would like to come pick me up, I'd love to talk about this at length while riding in the back of your car.

Disclosure: Former RPS contributor Leigh Alexander is one of the writers on Neo Cab.