Survival in games has become synonymous with simplistic managing of resources in order to stave off the entropic forces that come for all of us. Neo Cab, from Californian studio Chance Agency looks to put a much more human and relatable spin on the concept.

Neo Cab is a game about being one of the last cab drivers. In the not-too-distant future, you play as Lina, one of the last human members of a business long since taken over by AI in the city of Los Ojos. Players are tasked with balancing money, reputation and emotional health, while navigating both the streets of the city, and the conversations that the job brings.

Neo Cab strikes a personal chord, in my case. Before finally finding regular work writing, I made ends meet as a night-shift cab driver. While hardly a threatened industry in my quiet Welsh neck of the woods, there was this ever-present sense that the writing was on the wall. If it wasn't ride-sharing companies moving in from the cities, it would be automation, and turnover was already high, in part from dealing with the increasingly drunk, despondent and desperate locals. 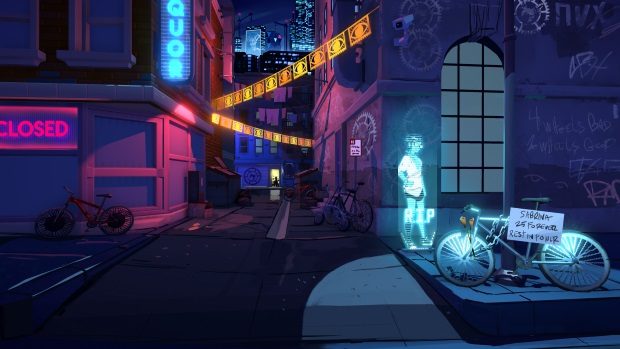 While Neo Cab will undoubtedly be telling a vastly different story from mine, I can't help but be deeply curious as to what kind of tales will be told both by the protagonist and their long, nightly procession of fares. It's also the latest in what seems to be a growing genre exploring the more mundane, human side of neon-slaked cyberpunk; games such as VA-11 Hall-A, The Red Strings Club, and 2064: Read Only Memories.

The crew behind Neo Cab have some seriously impressive credentials between them, especially regarding non-standard, narrative-driven designs. Among the team are writers Leigh Alexander (Reigns: Her Majesty) and Patrick Ewing (Firewatch). Art director Vincent Perea from Where's My Water and The Misadventures of P.B. Winterbottom, and sound designer Joe Burke was composer on mobile puzzle hit Monument Valley.

Neo Cab will eventually be available via Itch.io and Steam, and you can get on the mailing list here, to be informed of changes in development.

Disclosure: Former RPS contributor Leigh Alexander is one of the lead writers on Neo Cab.