If you click on a link and make a purchase we may receive a small commission. Read our editorial policy.
Developer: Chance Agency
Publisher: Fellow Traveller

We're having a bit of a cyberpunk moment. I've seen and played and received emails about loads of games that include the word somewhere. Lots of dystopian megacorp skyscrapers. But I can't remember seeing a game that's set in the liminal stage before, the time between the now and when the mass surveillance, holograms and AR implants take root.

Neo Cab is set in that time. It's a story-heavy adventure where you play one of the last human gig drivers, in a San Francisco-inspired city in the near future called Los Ojos. In Los Ojos, most cars are driverless, advertising is personalised, and beautiful clean streets are awash in purple and blue light. It's also clearly a complex, nightmarish time and place to live.

You play Lina, who has driven hundreds of miles to move in with their best friend Savy. Savy and Lina were briefly estranged, but Lina is happy and excited to see her again, and start a new life. Except, after a brief meet up, Savy almost immediately flakes, and Lina has to make a living, find places to sleep, and try to unravel what Savy has gotten them both into. 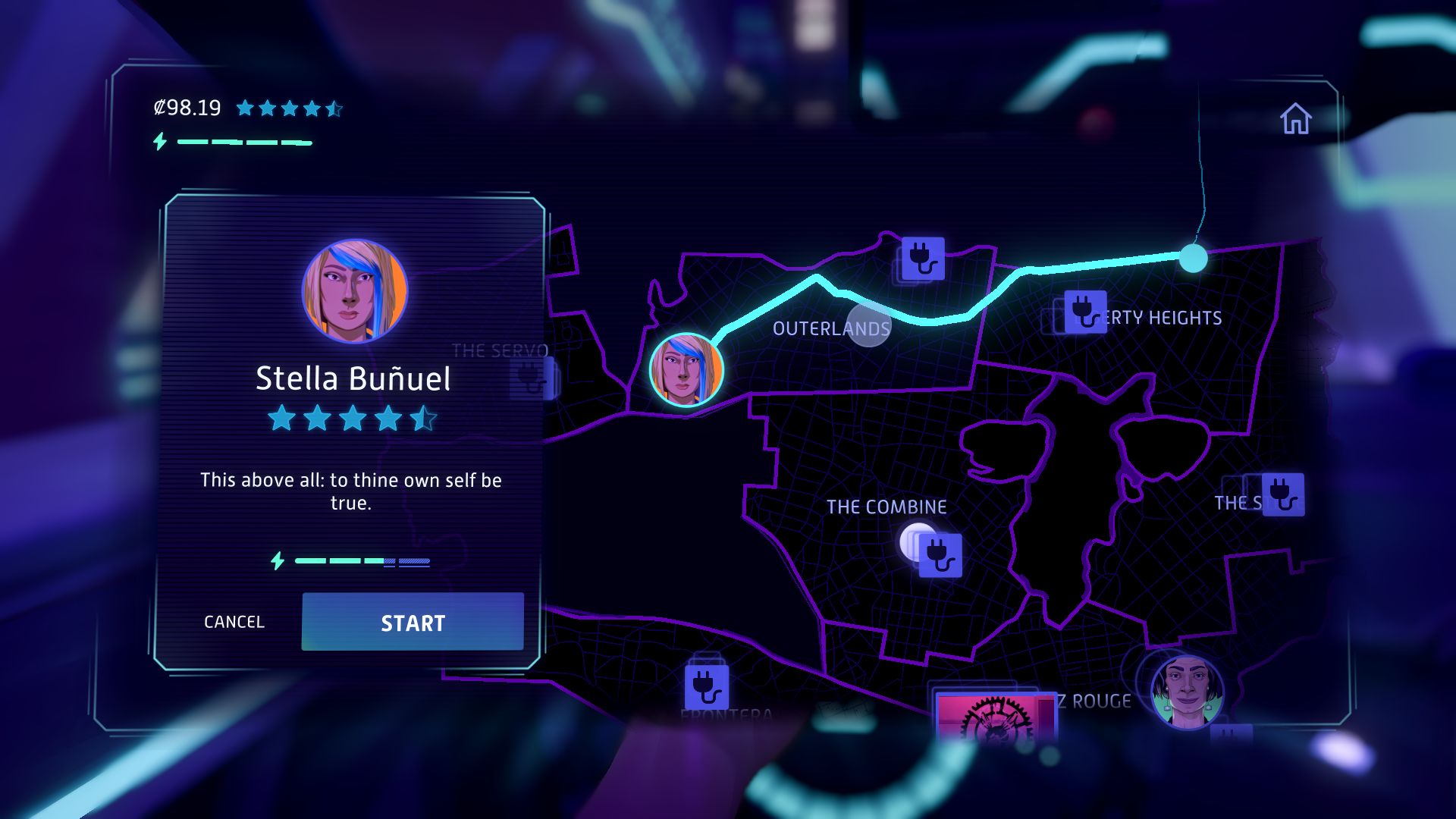 I'll cut to the end and tell you that what she's gotten you both into is fairly predictable, though it made me extremely protective of -- and angry for -- Lina. Tracking Savy down serves as the main story, but is probably the weakest part of Neo Cab as a whole, and the choices aren't as diverging as they appear the first time you experience them. I did, however, greatly appreciate it as a jumping off point for meeting some interesting people.

Los Ojos is host to Capra, a huge corporation that own almost every other corporation, and the power behind the driverless cars. They fudge their safety record statistics, hire gig economy works to wear full body surveillance suits, and work closely with (although do not yet outright control) the LOPD. After a ballet dancer was killed by a car with a driver, Capra are pushing through Sophie's Law, which would ban all but their driverless cars in the city. It is a tense time, and often reflected in your passengers.

As with passingly similar gig economy simulator Night Call, the best and most clever things about Neo Cab are the customers -- or 'pax' -- that you pick up. Each interaction can be a surprise, a delight, a frustration, and though some veer into having the subtlety of an episode of Black Mirror or a Banksy exhibition about mobile phones, most are good. They also almost all expose the weirdness of living in a world between now and then. 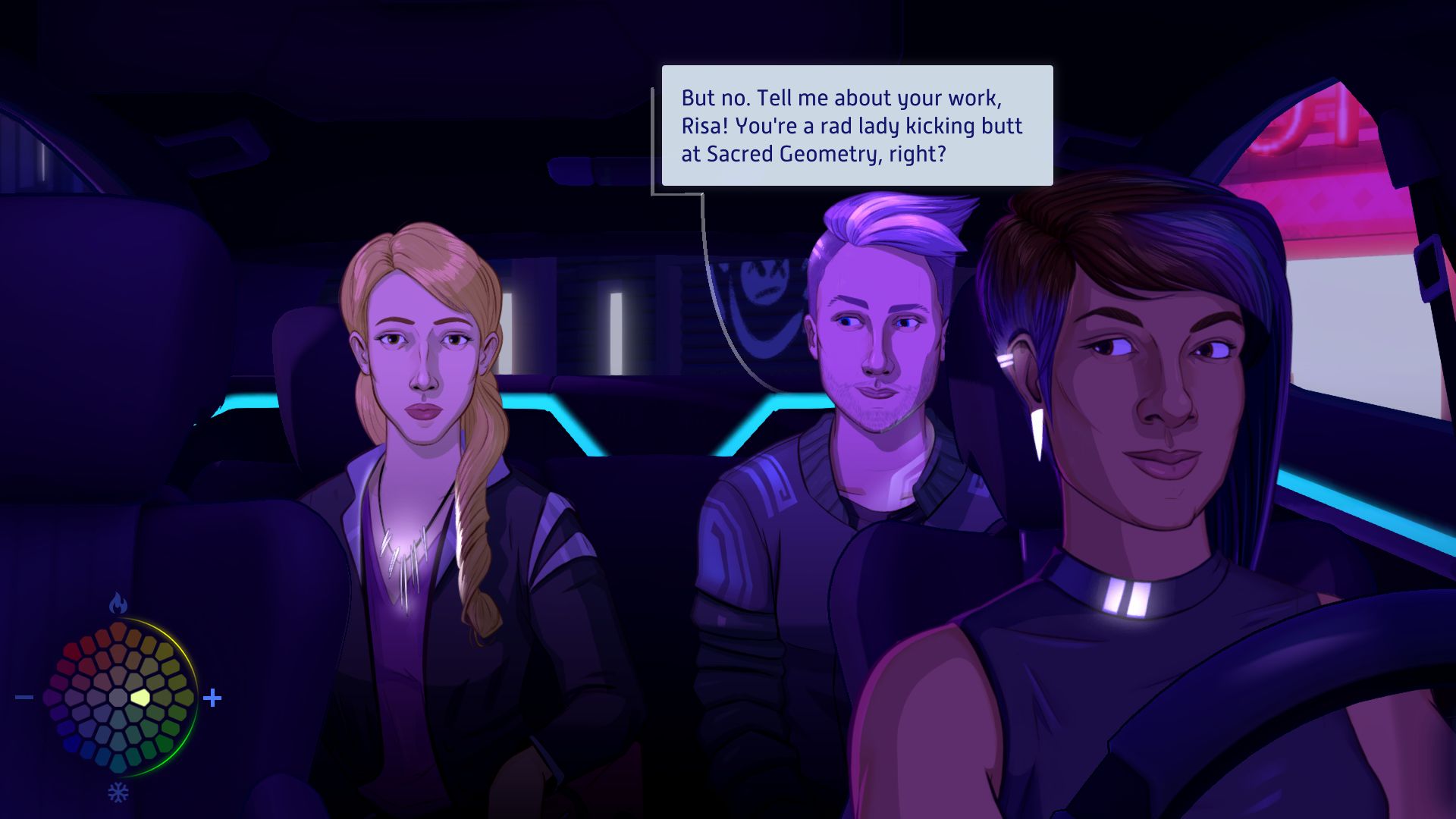 One pax has just got out of prison after over a decade, and finds himself a tourist in his own home town. Another is heading out on a first date, and is fretting over her technologically enhanced makeup. A pair of German tourists tried to find out if Lina was an advanced robot, and concluded they may in fact just be a substandard human. Their expressions, and Lina's, are beautifully animated, their outfits detailed, and their personalities unique.

It's a level of attention that you can find everywhere else in Neo Cab, too. Once, when I made a choice that meant Lina took their eyes off the road, I heard a horn as another car rolled past. Oncoming lights strafe into your cab sometimes. When you zoom in on the map, you can see topography where tall sky scrapers cluster in the city centre. And on that map, where the ride requests pop up, you can read your paxs' very funny, very well observed customer profiles.

You can pick up the same customer multiple times, and learn a little more with each ride, so you begin to get favourites. Friends, even. And while Neo Cab is short enough to play multiple times, clocking in around three or four hours, I'm really not sure I can be arsed going through Savy's storyline again. I'd dearly love Neo Cab to have a sort of free-play mode, where I could just keep picking pax up until I'd seen all their little stories. 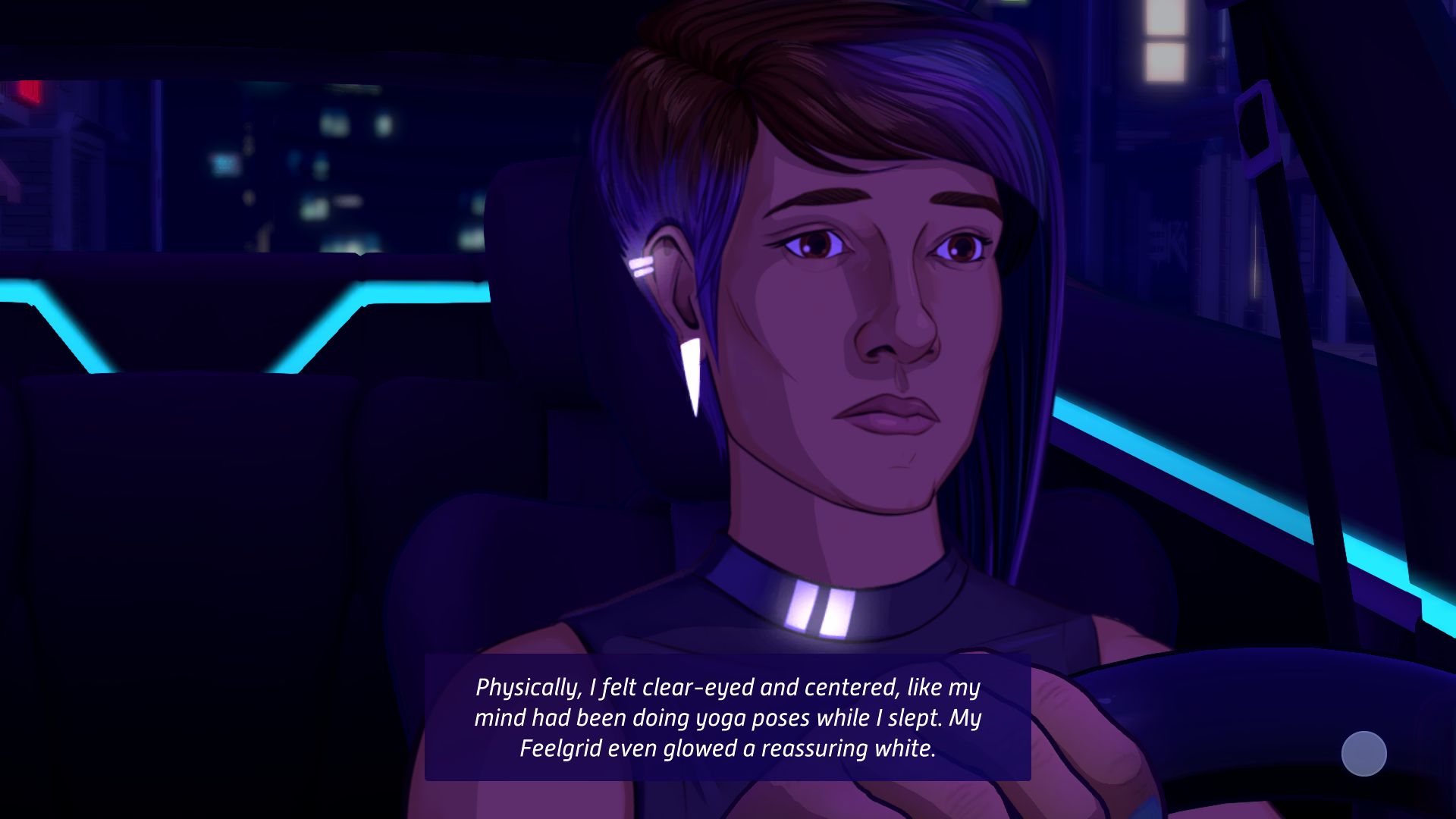 Conversations with them are affected by Lina's new Feelgrid, a bracelet that can read and display their emotions with a handy colour code. Emotional states can open dialogue choices or lock some off. Once, a pax noticed Lina's emotional state themselves, and dialled back what they were doing.

It is, at times, frustrating, because conversations and thoughts are the chief interaction you have in Neo Cab, and you feel them being taken away -- but it's frustrating in a good way. It made me more aware of Lina's mood, of how conversations can be, basically, emotional mind games, and made conversations seem more realistic. And it gave actual weight and utility to the Feelgrid, which otherwise would have been a makes u think MacGuffin. And Lina has a well defined personality, so you quickly learn what makes them happy, sad or angry.

Lina's other needs, for money and sleep, didn't become as tough to balance as I'd expected. I always had time to fill a company enforced ride quota every night, and even push on for an extra one. This wasn't jarring, because I'd rather experience the characters and writing without stressing over need meters, except perhaps in the case of income. A couple of choices seemed to be predicated on money being tight, but while I was selective where I refilled my battery or paid for a room, Lina ended the week more flush for cash than I am. 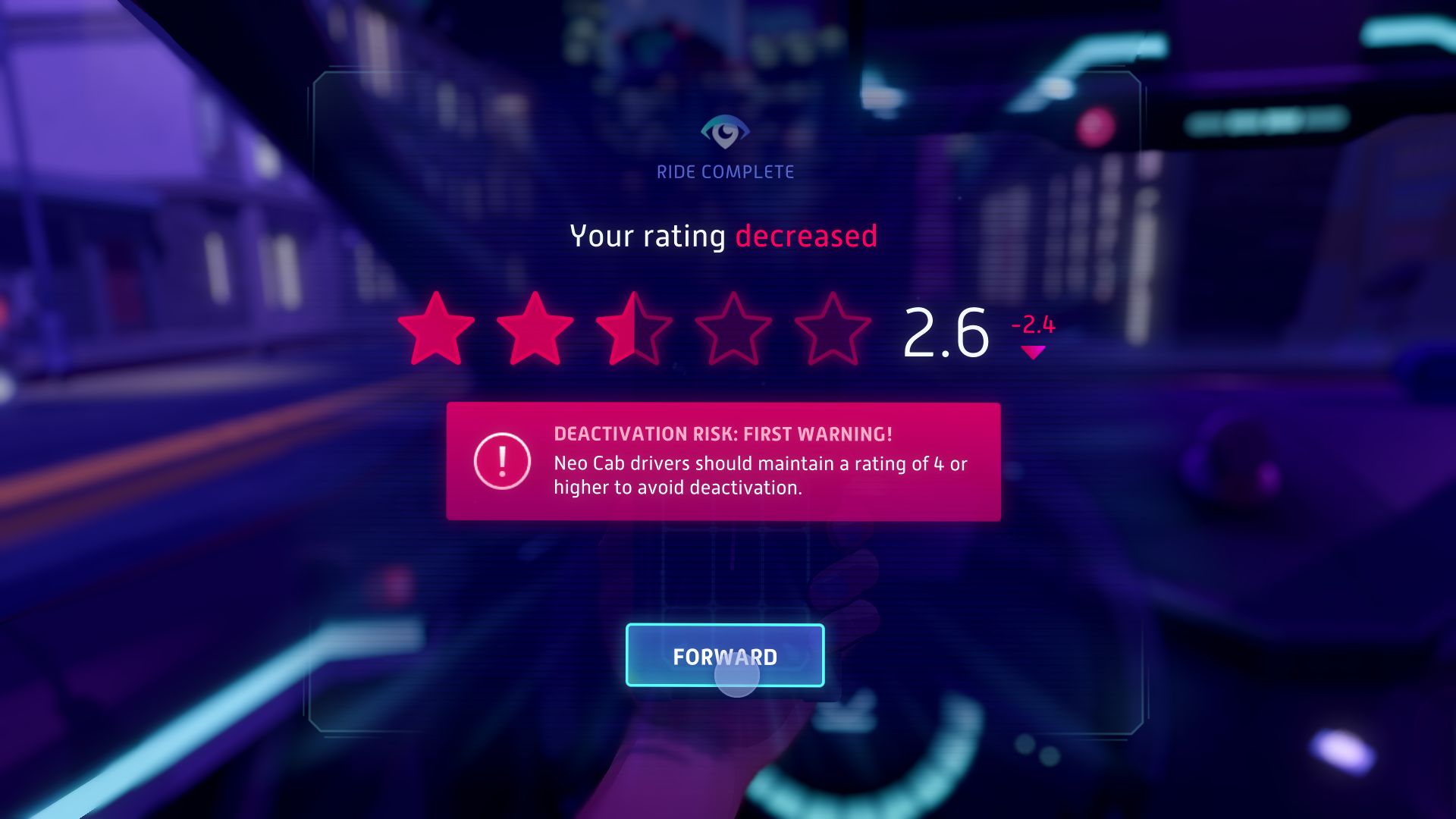 The Star Rating, though, I took very seriously. Neo Cab (the business) requires drivers to keep theirs above four, at all times, or be terminated from the service. I started to panic when I got a bad rating, and would avoid pax who had low ones themselves. I can only imagine what flavour of oddness it would be for a gig economy driver to play Neo Cab.

When I talked to Patrick Ewing, from developers Chance Agency, we spoke a little about the idea of 'no ethical consumption under capitalism', which he said he said makes him uncomfortable, as it logically leads to nihilism, whereas we can still just try and make things incrementally better. Neo Cab is certainly strongly anti-corporate. I already agree with that, so I don't know if Neo Cab has the power to change minds. But it does excel at capturing how messy things are becoming. How it can be difficult to know what the right thing to do even is. How some people have more breathing room to be 'good' than others.

In one ride I watched a drunk Capra executive be duped into donating for a fake charitable foundation. I asked how much he was donating, and he said "Why? You going to match it?" I'd given the same guy a ride a few nights before, and he'd thrown up in my cab and pretended he hadn't. Gave me a one star rating. So I didn't say anything else.

Disclosure: Bruno Dias has written for RPS, and also this game, although I have no idea which bits of Neo Cab he dun.