Neo Cab is that game you’ve seen about being an Uber or Lyft style gig-economy driver, set in a dystopian sci-fi future. It has been described as “neon-drenched” because that is the only way we have thought of to describe “thing that is cyberpunk” so far.

“We don’t actually self-identify as cyberpunk,” said Patrick Ewing, creative director of the developers Chance Agency, and not a retired basketball player. “We call ourselves ‘nowpunk’.” Neo Cab is, he explains, about a world where we just continue on our current trajectory. “I do think that's the job of dystopian sci fi, is to warn you of something while there's still a chance of changing it.”

Ewing was watching me play through a newer preview build of Neo Cab, which is out later this year. You play as Lina, a driver for Neo Cab. She’s one of the last human drivers in a city dominated by Capra, a corporation that has almost fully automated cabs. Lina is worried about her friend Savy, who’s gone missing, but also has to keep going to work to, you know, live. As a player you can decide how to talk to the passengers (known as “pax”) but have to weigh up the reward of making good money and keeping your customer review rating high against the satisfaction of snapping at a rude entitled ass. Often, keeping quiet seems like the safest answer. Sometimes Lina sleeps in her car. 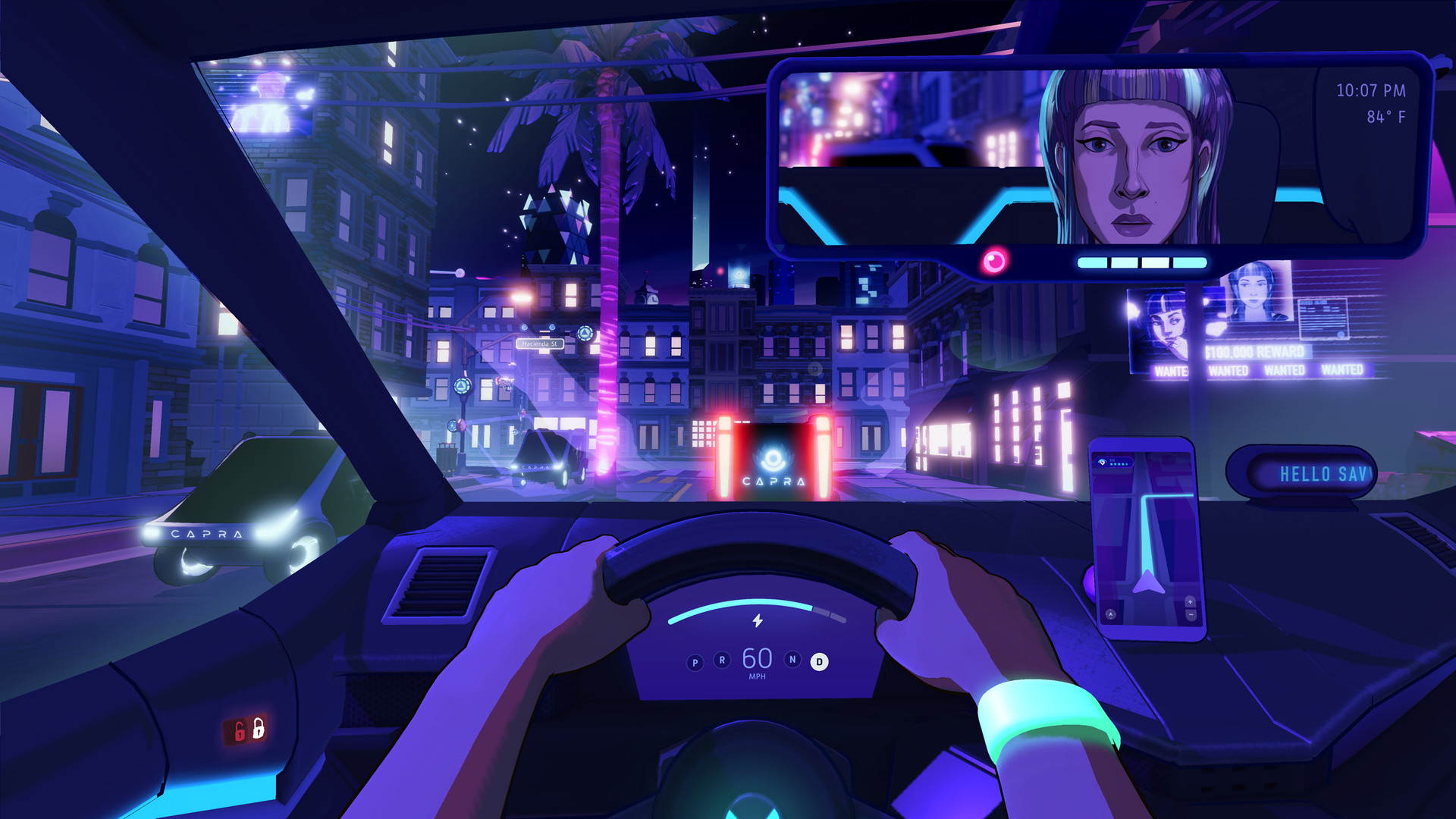 Ewing told me that they interviewed a lot of drivers as part of the process of making Neo Cab. Some, he said, were students who wanted to save up to travel in the summer -- “‘I do a shitton of Uber at the weekends to get enough cash to go to China.’” Another common story was people who couldn’t afford to live in the Bay Area driving an hour and a half into San Francisco, sometimes sleeping in their car over the weekend so they could pull 12 hour shifts. “The scary thing, of course, is that Uber and Lyft are in a death race to the bottom, right?” Ewing said, referencing that Uber recently cut it’s wage to 60c on the mile, only 2c more than the cost of running the car. Nowpunk seems appropriate enough, then.

Lina’s car swept around the purple streets, the view cutting between different angles that made me think of fixed dash cams in reality TV shows: her face, with the passenger and the city moving in reverse behind; her eyes in the rear view mirror, seen from the back seat; her hands on the steering wheel and the passenger in the mirror instead. I’ve picked up Gideon, the daughter of one of the wealthiest families in the city. Her mother is sponsoring Sophie’s Law, a proposal to ban all human drivers. Flash forward 30 years from now, Ewing suggested, and owning a car could be as unusual as it is owning a gun in some parts of the world today, seen as dangerous or socially unacceptable.

Neo Cab, to me, doesn’t seem to be shying away from what the internet broadly describes as politics (as in “The musical Hamilton is entertainment, and it shouldn’t be about politics.”). But despite what he twice referred to as “Trump’s wall” being visible if you drive close to the border, or examine it closely on the map, Ewing told me Neo Cab doesn’t really take a strong position of any issue of our time today, other than being anti-corporate. 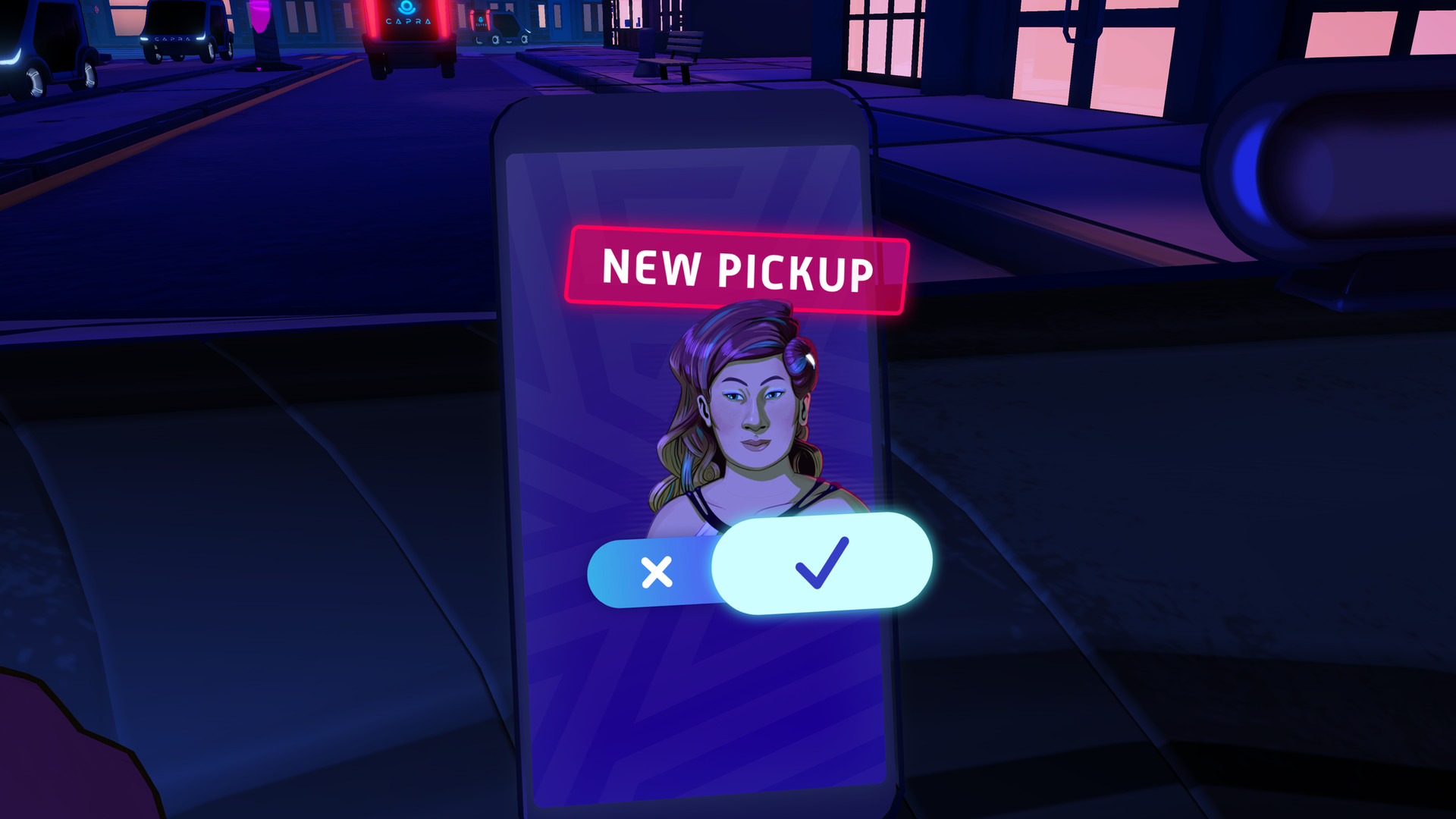 “I think the biggest thing that makes our game political is that it's not a power fantasy,” he said. “You're playing somebody who needs to work to live, and that brings up tensions in these rides. We're not going to knock you over the head with the message, but I see people get uncomfortable.”

I did, on a couple of levels. I, who consider myself a nice left-wing socialist, use rideshare apps sometimes. Being in San Francisco and playing a game about rideshare gig companies being shitehawks made me embarrassed, like I’d just weed myself a bit and didn’t want anyone to see the back of my jeans. (Ewing said that the idea that it’s impossible to exist ethically under capitalism troubles him, because that way leads logically to nihilism, whereas trying to make things incrementally better still counts.)

The other part is the many dynamics in play. I have only experienced the dynamic from the point of view of the passenger, where the most awkward thing that has happened to me so far is that the driver will e.g. go on a rant about Brexit being amazing. How much weirder is it when your passenger is the one behaving in a way that makes you uncomfortable, but you may not even have the option of saying something because you desperately need the money or positive review. And drivers have that interaction multiple times every day! Being confronted with the position of power you might hold in everyday life is uncomfortable, especially when the majority of the game is about trying to have meaningful conversations with the pax in Lina’s cab. 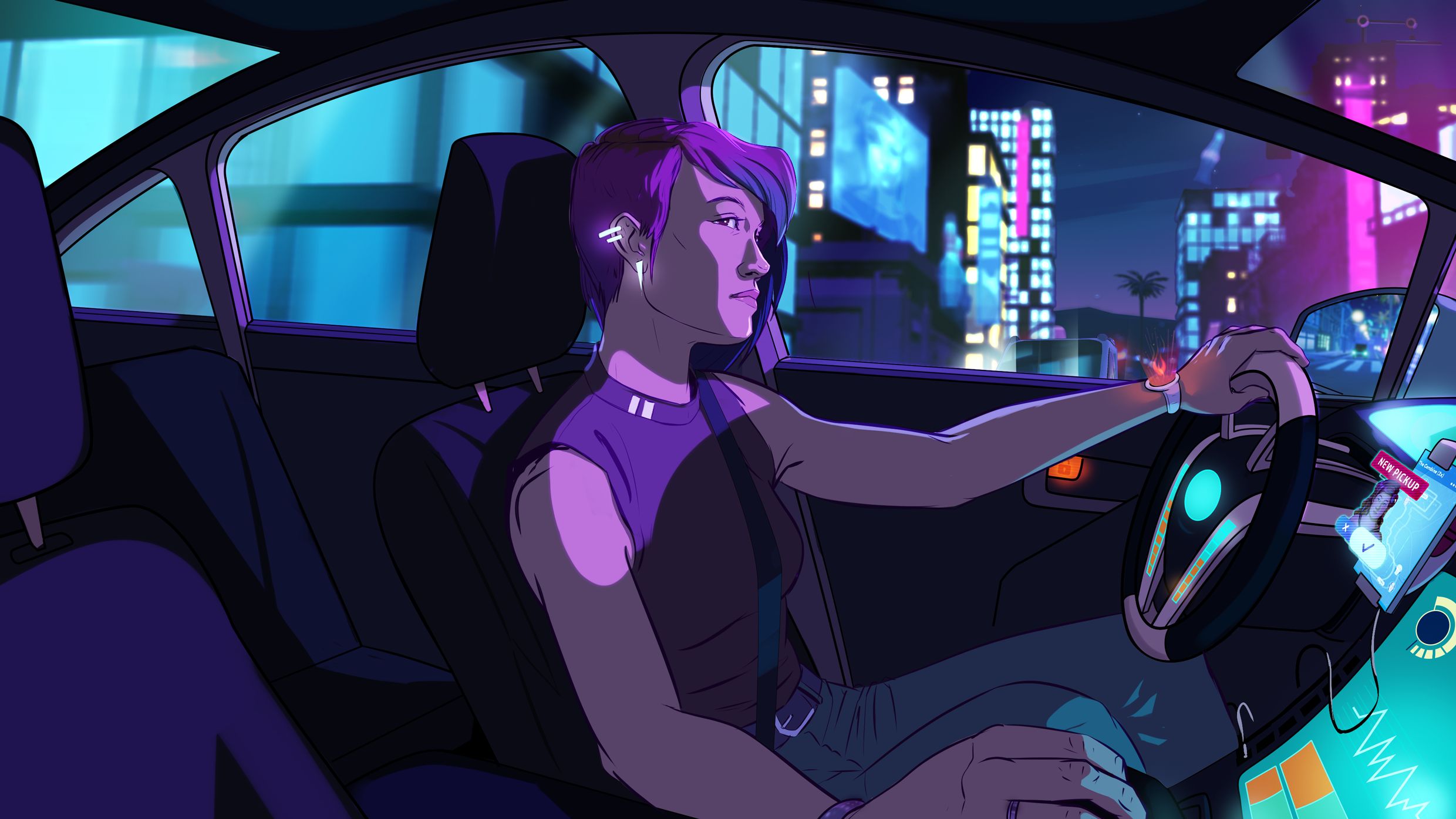 The team used consultants and a diverse pool of writers when creating the passengers, and checking the tone of the game, and Ewing said there are a few rides that really bring out the complex layers of tension that can arise. One in particular is the “privileged enlightened woke white dude” Anthony on a first date with a “very bougie” woman, who are both trying to engage with Lina and make her part of their date, but she’s just… at work. At the same time, Anthony is being obnoxious to the two women. “It's that 'the personal is the political’ thing,” Ewing explained. “The unspoken truth in the car is these two people built the whole system that drives Lina's entire life, and they want to be on equal footing with her, but [they] can't be.”

Similarly Gideon, who I gave a ride home, is a naive antifascist born to incredible wealth who wants to run away from her family, and depending how your conversations go her viewpoint can change. “It’s kind of a political education for her. You can try to just throw away your privilege, and pretend you don't have it, but you can't do that. Your mom is always going to be your mom,” Ewing said. “Maybe what you should really do is use your privilege for something you believe in.” By contrast, one character is a gig worker for the competing company Capra, and will never give Lina less than a five star rating, no matter how their conversation goes.

I had to refuel my cab to keep working, spending some of the precious money I’d earned giving Gideon a lift, and someone called Azul jumped into my car without warning. They’d been hit by a Capra cab and wanted to flee the scene, so I obliged. Azul is still fighting for a public city, against the corporations. They’re also one of several characters who essentially become locations in the game, always available to pick up. Then I picked up two German tourists who were convinced Lina was a very advanced robot rather than a human being. It was a mood change, an up and down and up, a bit unbalancing, but in a good way. How many people must Lina meet, and never see again? 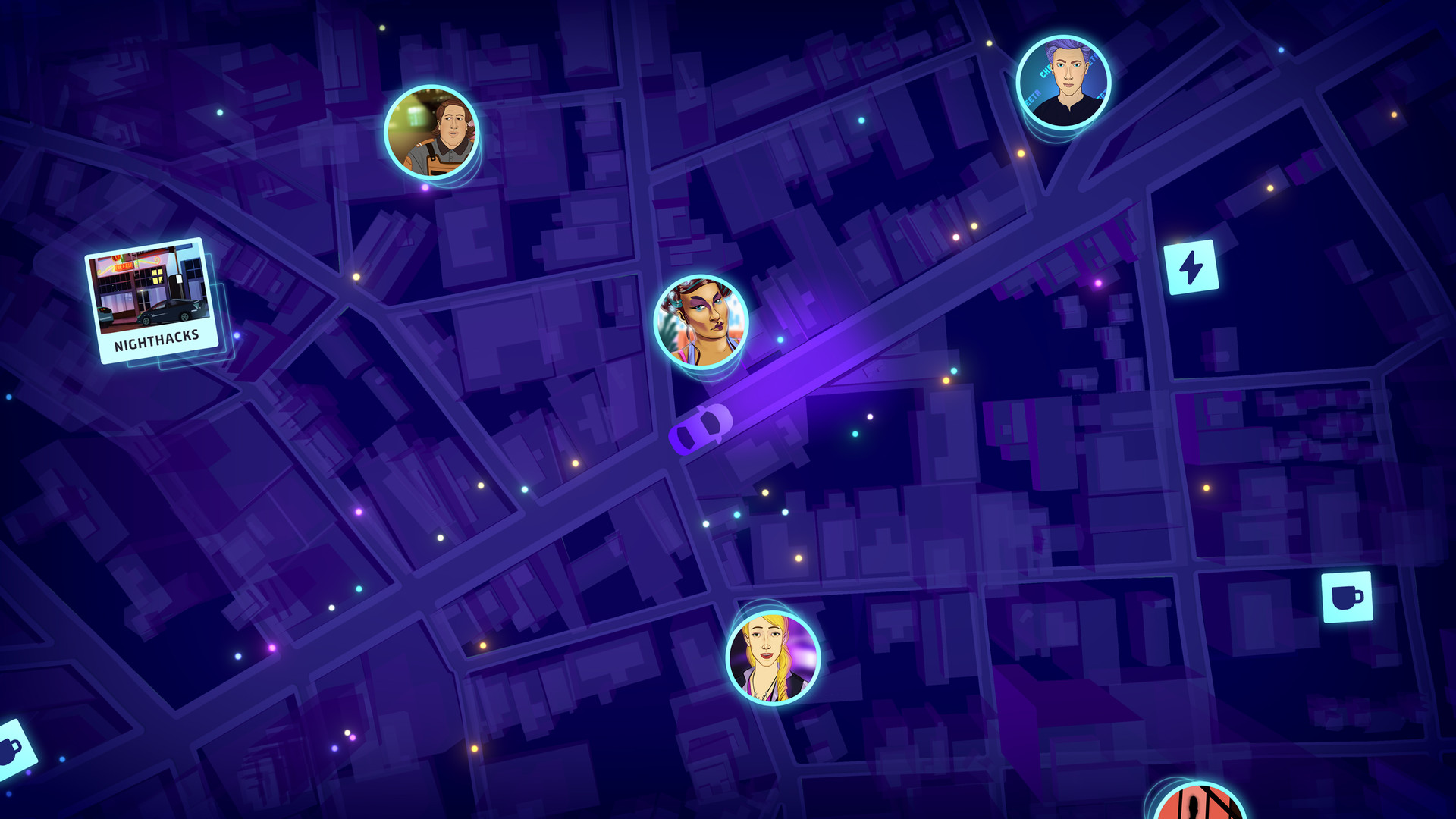 In this new build, the Feelgrid has been added, a wristband which tracks Lina’s emotions across a honeycomb of different colours. Gideon made me feel angry or agitated -- a high energy negative. Some dialogue options will only unlock if Lina is in a particular emotional state at the time. You can also make emotional trade offs; making fun of a pax might make Lina happier, but will obviously upset them. If Lina gets too tired or unhappy, you can’t continue playing. I managed to get the Feelgrid back to centre, neutral, balanced. Ewing approved. But balance isn’t everything. “Another belief we have is that there's no such thing as a bad emotion”, he said. “Sometimes it can be really good to get angry.” It’s important that Lina is able to stand up for herself sometimes.

It sounds complicated, but playing it wasn’t. It all made sense, because “nowpunk” is "now" enough for you to recognise how everything works. Navigating the in-game app to find a new passenger felt like second nature. Talking to the pax felt like talking.

“One of our sayings on the team is that every passenger is a puzzle. Like you're trying to figure out their deal,” Ewing said. “In a world where they could be efficiently whisked around in an empty automated car, this person chose a human driver tonight. Why is that? Figuring that out first is the key to figuring out how to form a bond with them.” This is a trick I think we’re all still figuring out in real life. Neo Cab does it in beautiful sweatbox of potential discomfort, and I am very excited to play more.