If you click on a link and make a purchase we may receive a small commission. Read our editorial policy.
Developer: Bandai Namco Studios
Publisher: Bandai Namco Entertainment

This is Hooves. He loves to stab and parry and slash and speak in an alien tongue about how good he is at all of those things. Hooves also enjoys setting folks on fire, and paralysing people with frightening runes, which has led some observers (me) to dub him “Horse Geralt” after the hero of The Witcher 3. Unbeknownst to Hooves, he is a clone of the Witcher. That’s right, poor horsey doesn’t even know who daddy is.

Although this backstory of Hooves' is my own dumb invention, it’s no more fanciful than any of the other tales in fighting game Soulcalibur VI, a rampant, fun-loving arena of swordplay and silliness.

To get something out of the way: I’m a fighting games dabbler. An angry wee toad, not a champion. I wouldn’t swear on a copy of Street Fighter II in court, but I enjoy the odd bust-up in Tekken 7 or For Honor or Absolver. There is a tense satisfaction in memorising the right button-slaps for a vaulting deathkick or a flurry of needle-like pokes. And even more satisfaction in surprising yourself, and carrying out these dance-like combos in the middle of sloppy fight against some nervy skeleton in a big dress. But more on the odd warriors of this particular fighting game in a moment. First, we must consider the fidelity of its stabbing. That’s very important. 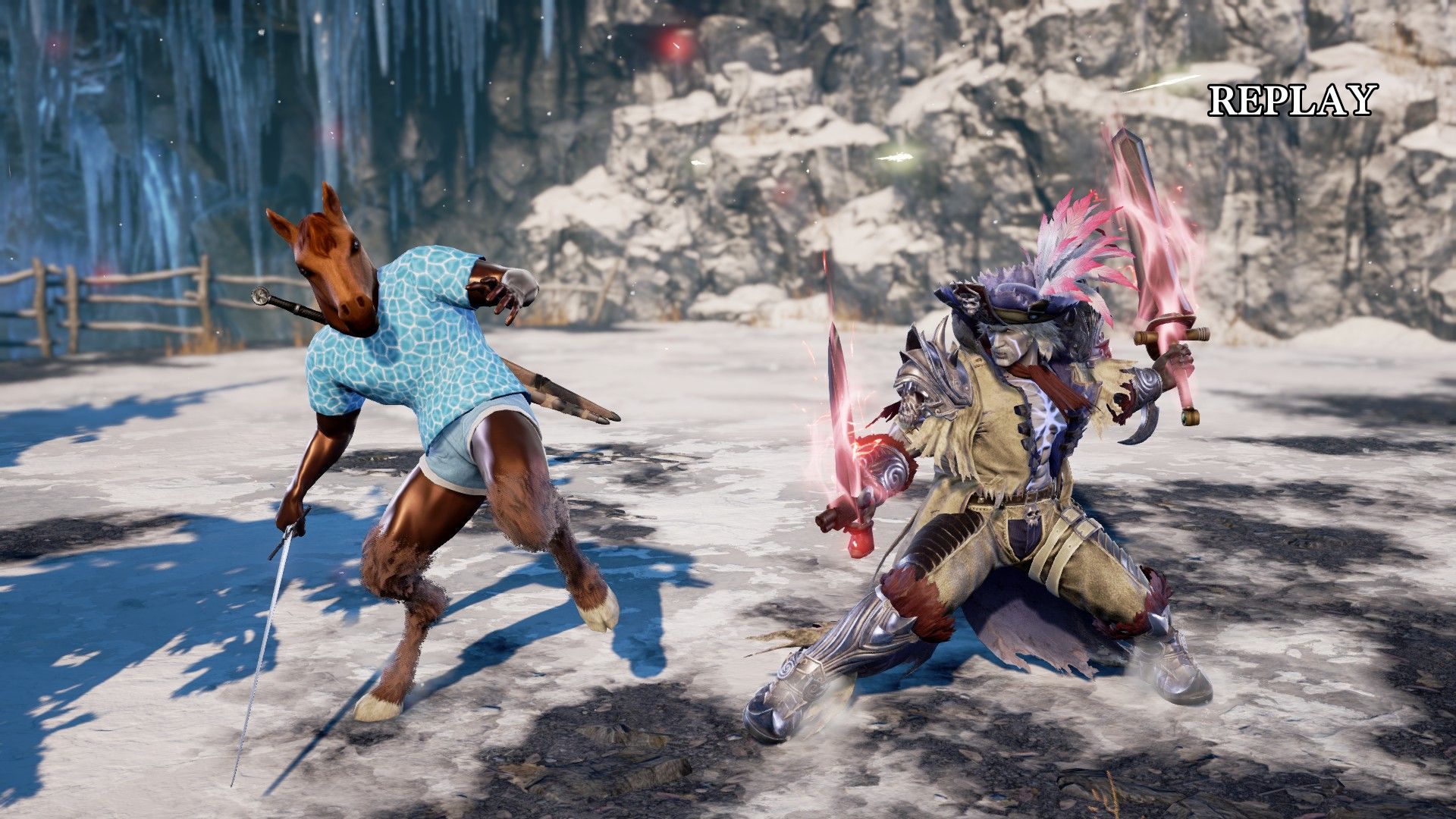 The basics are simple enough. There are horizontal attacks, vertical attacks, kicks and a guard button. It's straightforward stuff, mostly. Each character’s movelist is divided into different pages. A single page gives you all their main attacks: the slashes and lunges and heelstomps you’ll find most useful. It’s a solid introduction to each swordsperson. Maxi is a dandy who likes to hit people with nunchaku, for example, and then he does a somersault, probably from joy. Xianghua is a girl with a wobbly sword. She is blood type B, and likes to perform the following moves: murdering you.

There’s also a decent tutorial built into the “Libra of Soul” mode. This is a sort-of-RPG in which you travel around a map fighting computer enemies for points. It's mostly good for learning the basics by fighting an AI sensei early in the adventure, who tells you how to parry properly. All these teaching methods and training modes make the game feel like a good place to shuffle into the Soulcalibur world, and for a Tekken boy like me, that’s mostly true. But being a Tekken boy, I am also immunised against a certain flaw of 3D fighters: awful storytelling. 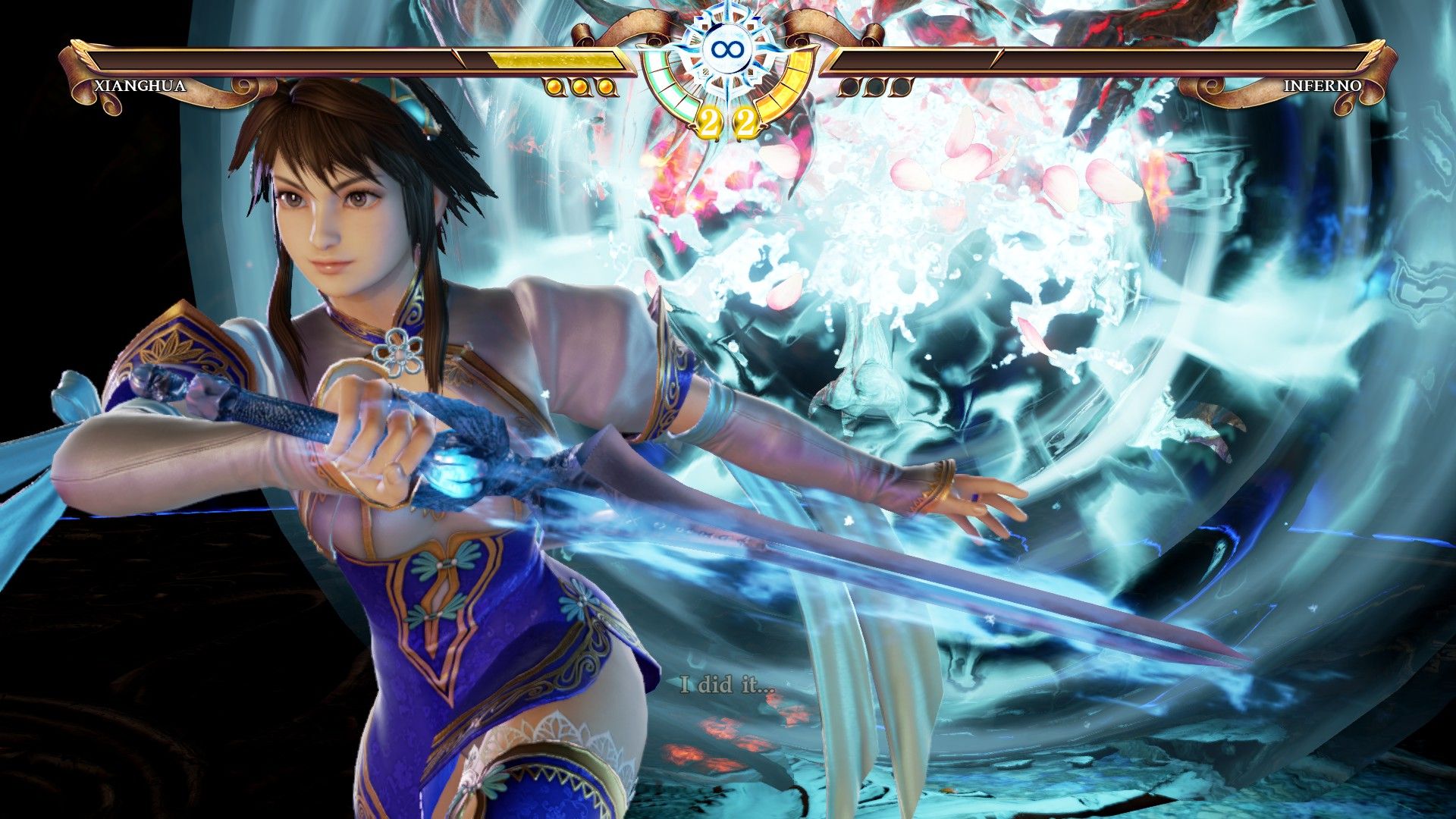 The story mode here is a bad anime folded upon itself multiple times, like a soggy origami crane. Each character gets their own paper sculpture of cringey dialogue and scatterbrained plot on top of the vanilla campaign. For loreheads, maybe there is something in these tales, but there wasn’t for me. And I’m guessing even fans care little about Xianghua’s quest for the sword of legend, or Kilik’s quest for the sword of legend, or Taki’s quest for the-- you get the idea. The real thrill is in the sidestep, the parry, the launcher.

Here’s where it gets complex. Coming from Tekken or Street Fighter, the hidden game of rock-paper-scissors-guard-throw-break-parry-reversal-counter leaves me a bit feverish. In multiplayer, the game throws all its weight at you soon enough. Trying to deal with the onslaught, I delved deeper into the training modes, and soon lumps of jargon were sticking to my eyelids like gore. Lethal hits, guard impacts, reversal edge, run counters, soul charge, reverse impacts. Razzle dazzle fighting game terminology. It’s nothing a diehard biffer won’t be able to swallow in a single gulp, but a slowpoke such as I needs a bit of time to sup. 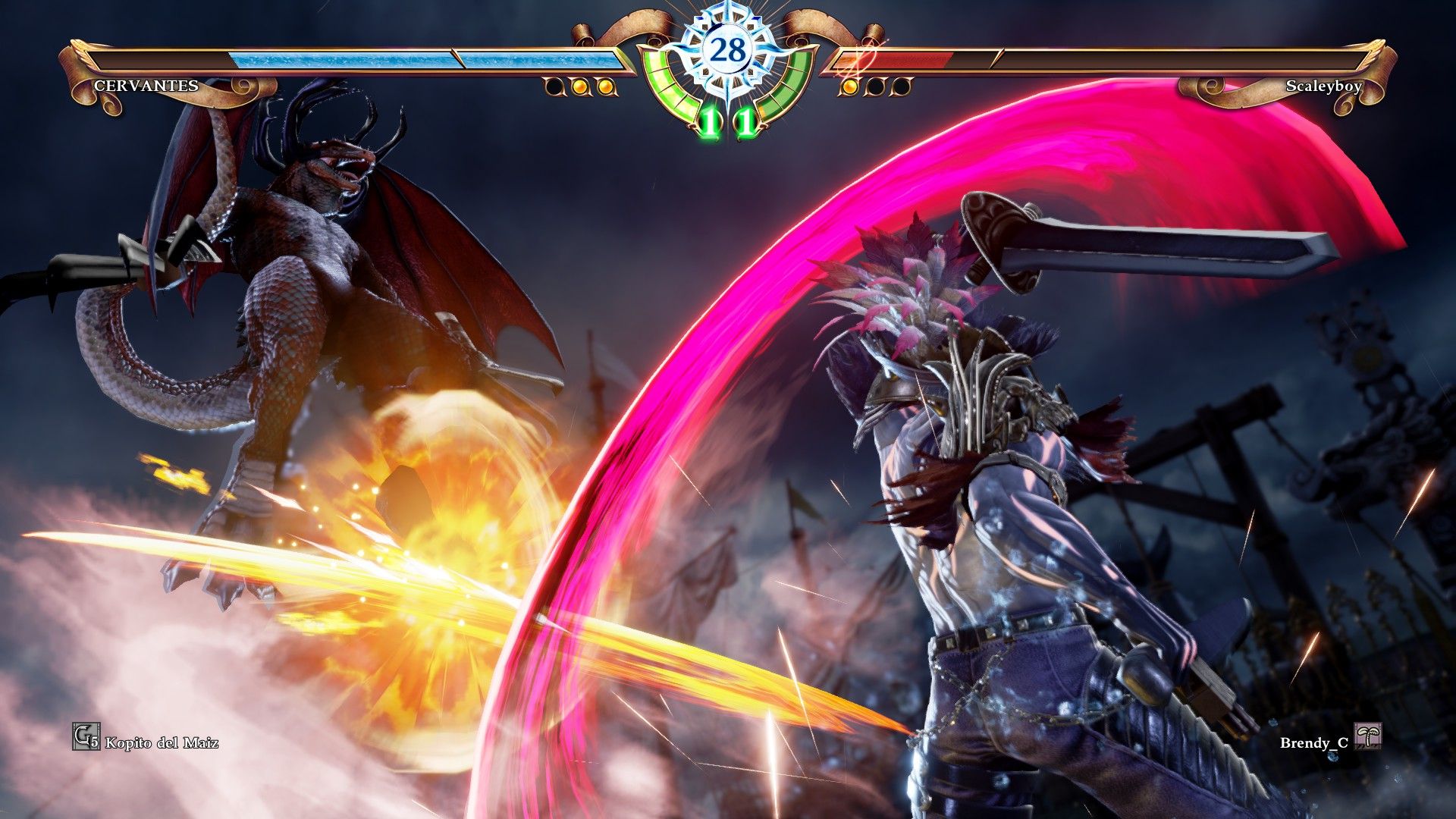 But learning is good. And you can only really learn in the ring. Here, glowing effects and pop-up notes highlight the dangers. I know when Nightmare (large, rude man whose only friend is a sword with an eye) spouts flames that he’s charging up an unblockable attack. I know when Seong Mi-na (unremarkable girl everyone in the village wants to marry) twirls her pointy Guandao above her head that she is “soul charged” and will now do extra-damaging moves. I know when Cervantes (zombie pirate and author of Don Quixote) strikes me with a crimson slash it means a “reversal edge”.

This is a good 'un, the old reversal edge. It's a cinematic moment in which each player has to commit to a single attack, or perform a feisty dodge. It’s great stuff, especially when you both go for the same move, clanging off each other and jumping back in a panic, before taking one more hectic guess. It’s a bit more complicated than rock, paper, scissors. But basically: a sideways slice will beat someone trying to kick you, a kick will beat someone trying to hack into you with a vertical hit, and a vertical chop will beat someone swinging from the side. 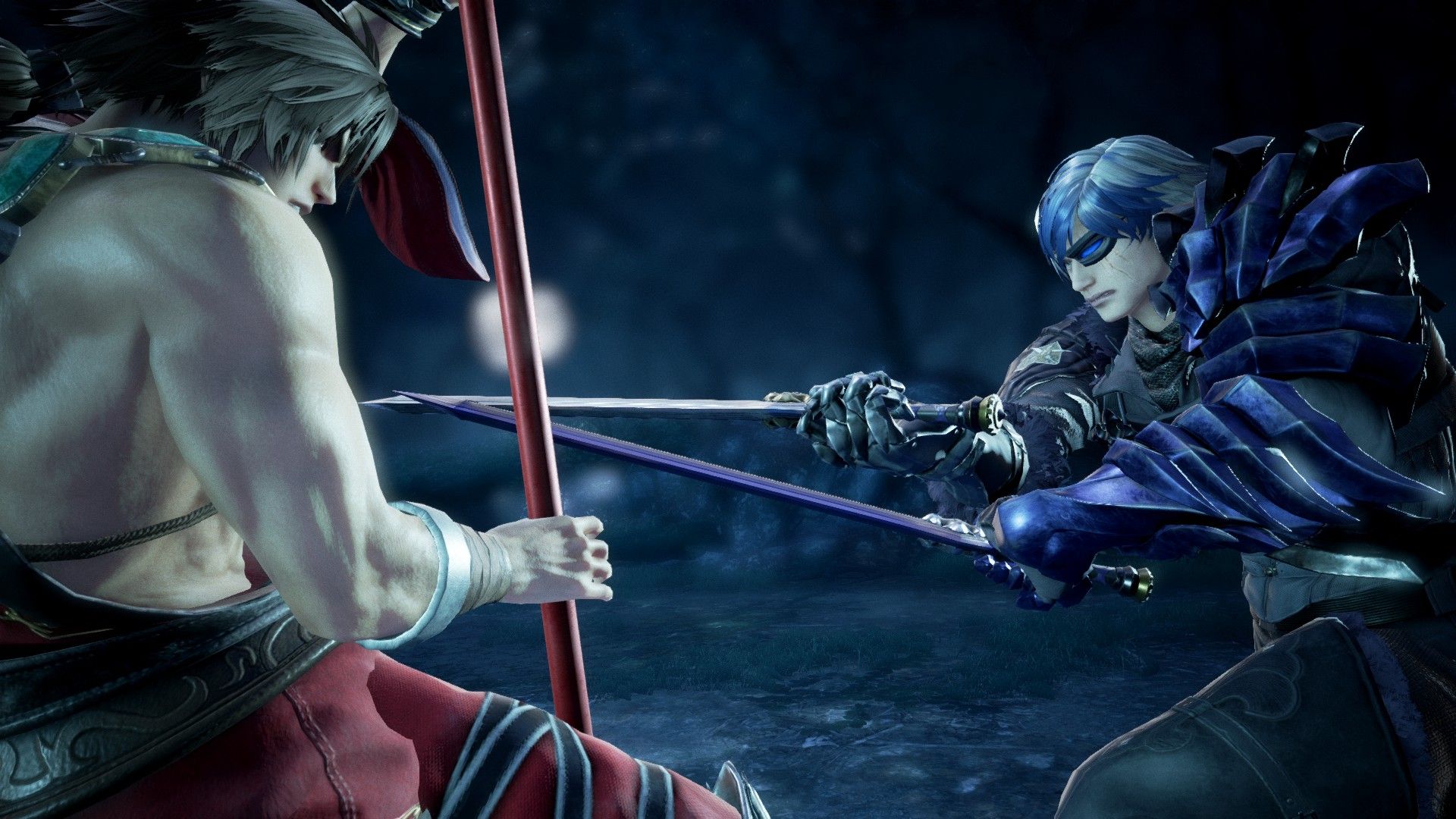 But when this and other moves are all mixed together by a well-trained player, I fall to pieces. That means two things: I need to get better. And this is more complicated than it first looks.

Here's where the “combat lessons” are neat. These are small “how to” manuals for each murderer. They’re dry text dumps but they also break down the basic strategy for each character. I thumbed through the advice for stick-swinging Kilik, for example, and learned how to keep foes at range with a handful of staple moves: wide, sweeping swings of his bo staff. Sure enough, when I went into a real fight with that mentality, it worked. Looking through Horse Geralt’s combat lessons, I see that some moves whip out his silver sword, which does more damage to opponents pumped full of soul charge. In other words, a good way to put down a raging bull of a player. 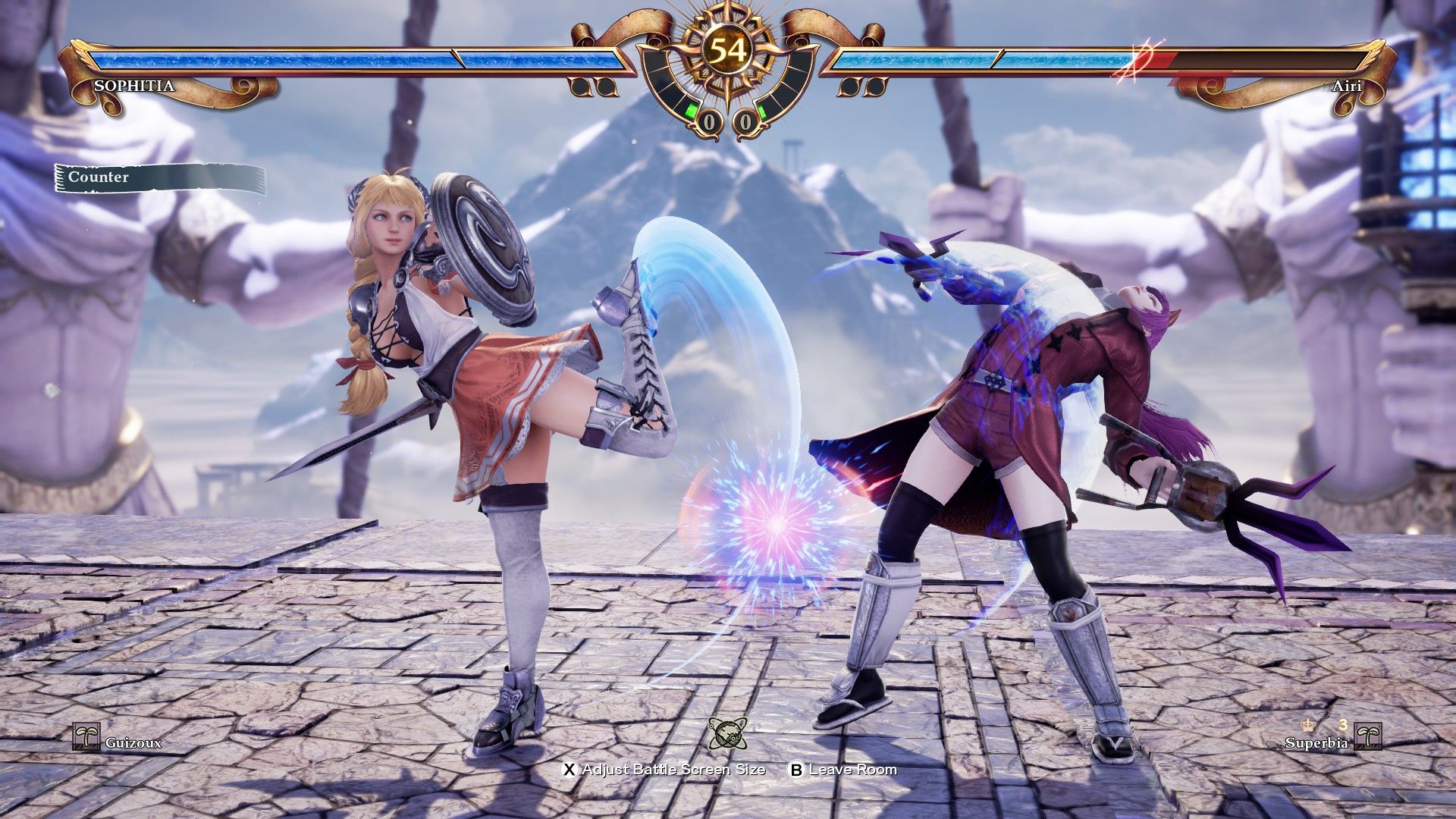 These are the details you often need to look for in YouTube videos full of impenetrable chess-like notations. I like those videos, but I’m glad to have some basics explained in the game itself, because I’m an idiot. Four paragraphs ago I wrote about a Guandao. I had no idea it was called that. I had to look it up by googling “chiense spear” [sic].

But I’ve been dancing around the true beauty of Soulcalibur VI long enough. The character creator is the real star of this game. It’s a feast of possibilities, offering you a bunch of fantasy races to base your character on, then forcing you to copy and paste the fighting style of a main character into their slider-born body. I have made a whole gang of lizard lads, and photographed them as if they were indulging in some reptilian stag do. I have created entire Halloween boybands, mummies in waistcoats, orcs in hotpants, a skeleton with a bandana. 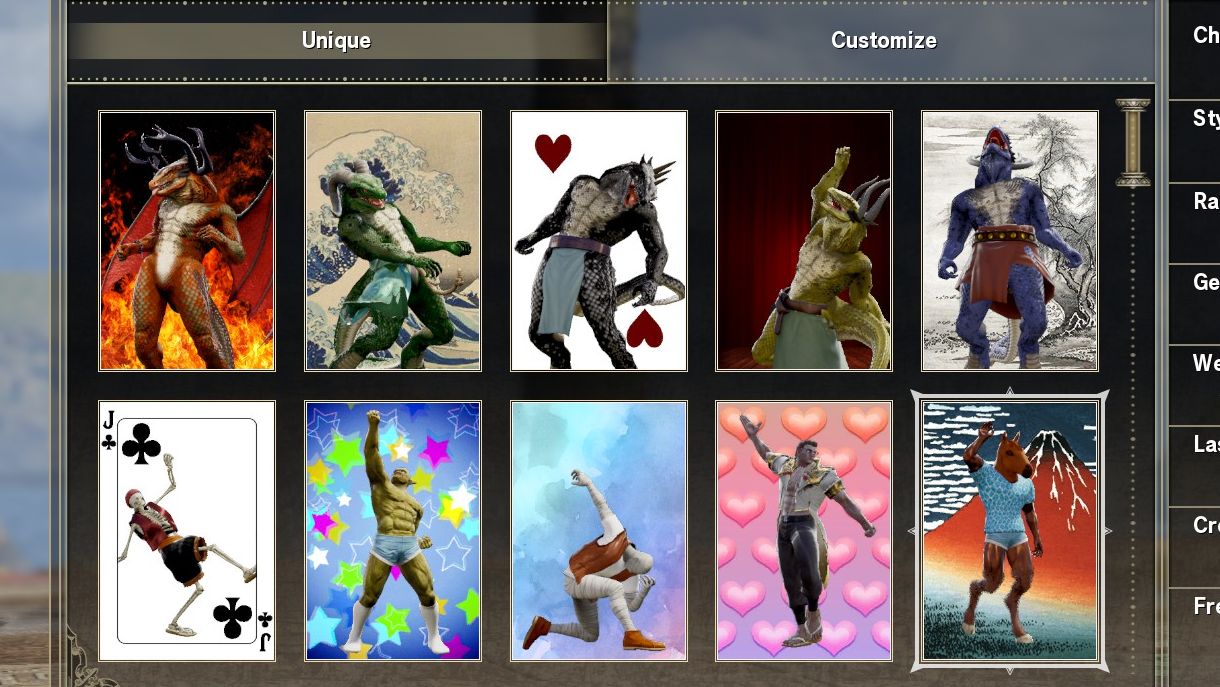 Yet all this is nothing compared to the hideous imagination of the internet-at-large. Somebody has made Marge Simpson. Somebody made a Xenomorph. There is Zoidberg and The Hulk and “Sexy Venom”. There are so many good things. Here is Spiderman fighting a fully-functioning Magikarp.

The moment-to-moment fighting is strong stuff. When you and an opponent get into a string of blocks and ducks and parries, it takes on the energy of a deadly tennis rally, and that’s all I really demand from a fighting game: a good-looking injection of adrenaline. But it’s the preposterous and wonderful character creator that makes the whole thing stand out, providing enough daftness to take the edge of that adrenal hit. For long stretches, I set aside the shoulder-hunching stress of ranked mode and just hung out in casual rooms, fighting shapeshifters and stone people and elves and inappropriately proportioned rabbit women. Although, that style of fighter isn’t limited to player creations. 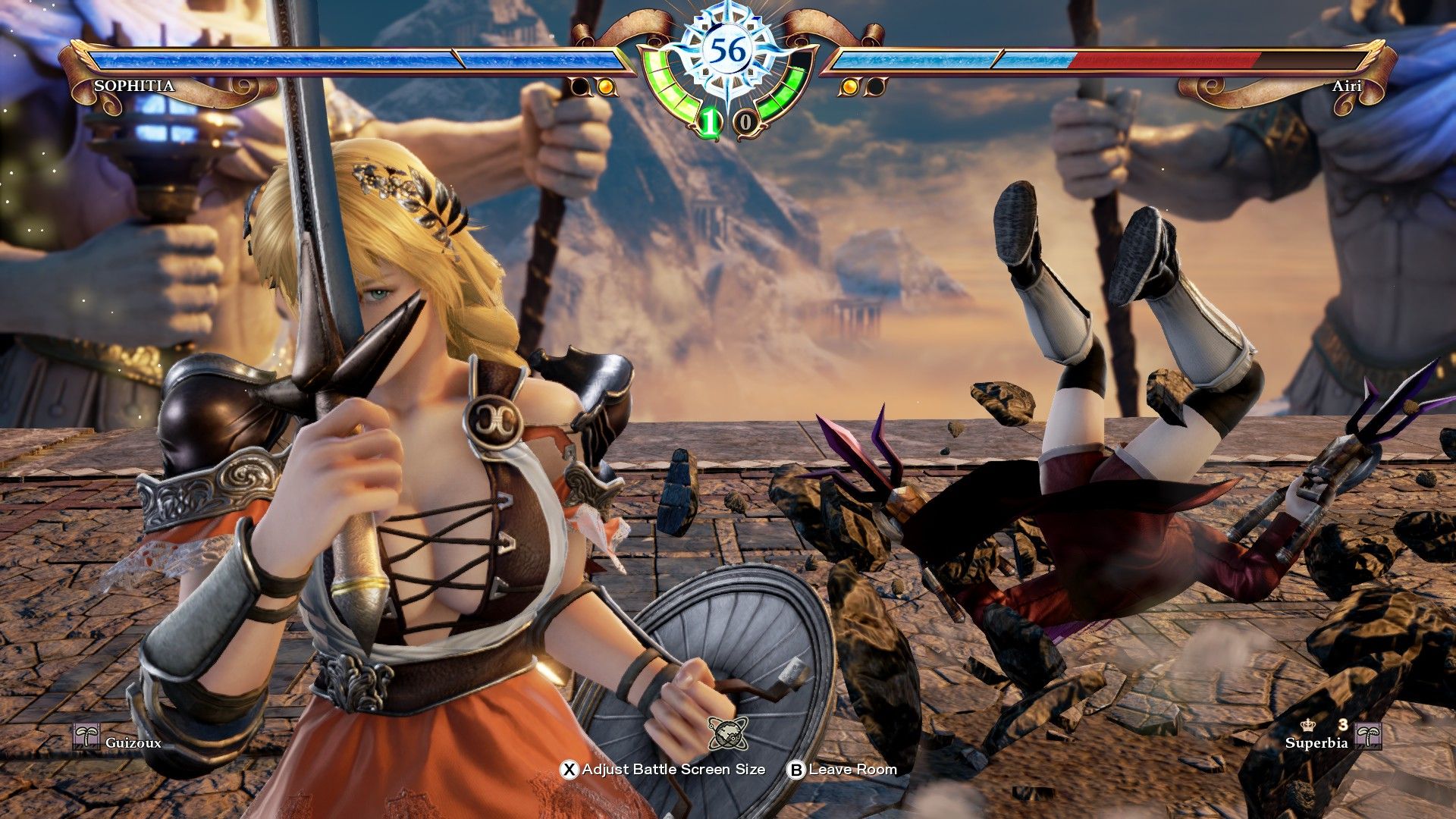 Leeriness is hard-coded into this game. Lady swordsters duel with boobs akimbo, nipples perking through their leotards, asses clamouring to escape the claustrophobic boundaries of a HD monitor. Pull off the right moves and you can hit your opponent so hard that their clothes come off or deteriorate, and though this affects all fighters, it’s hard not to raise a sceptical eyebrow at such a schoolboy feature, seemingly designed to let players lech a glimpse at Sophitia’s sideboob. None of this takes away from the clashing of spear and dagger, the quality of the fighting itself, but it still feels immature and embarrassing.

This lizard with a dick is fine though. 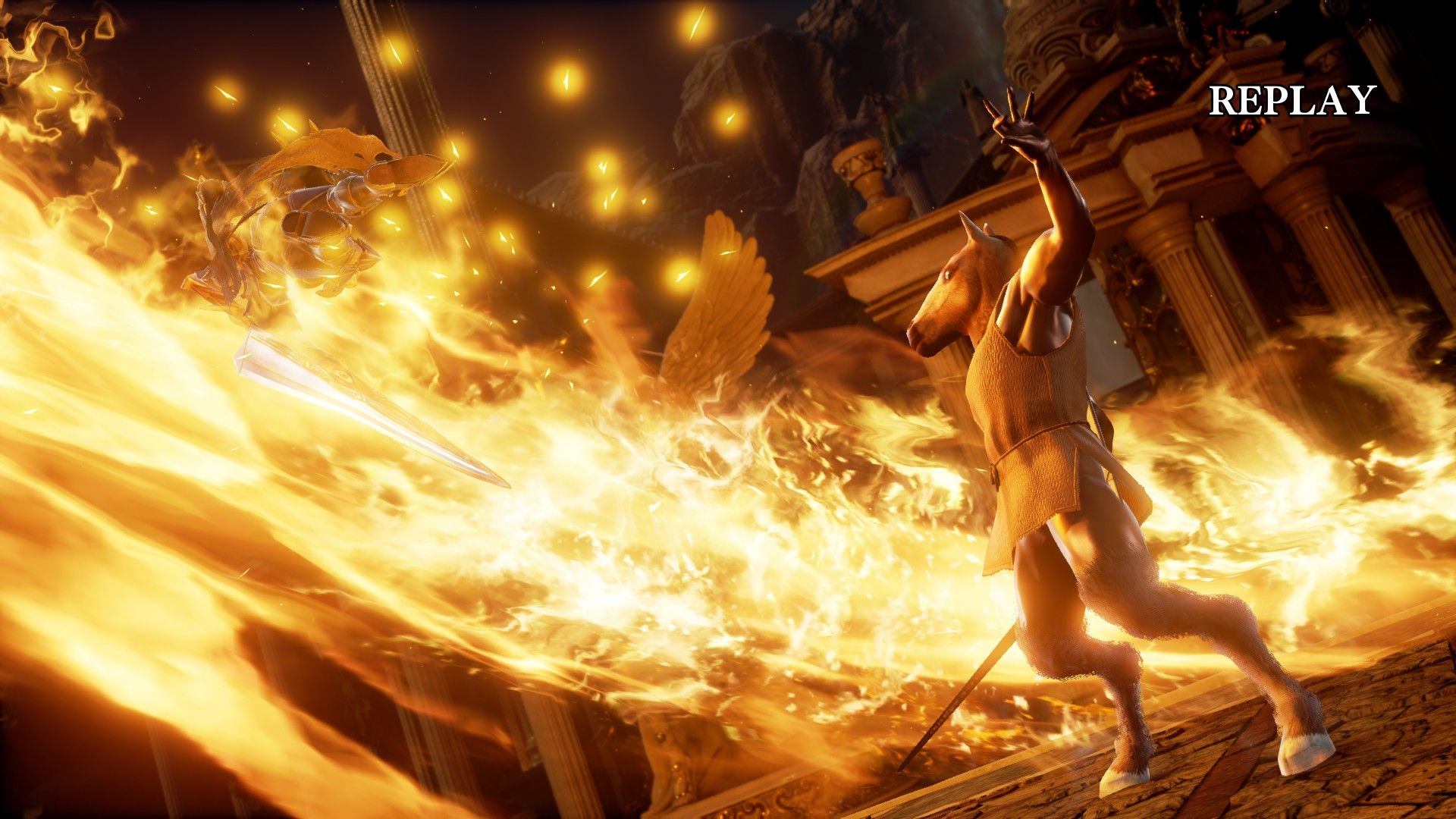 In all, I’m pleased by my scrappy fights, and my tutelage of Hooves the horse man continues. One sad thing to note is that £50 is a high price, a fandom price, and that’s a pity. Because the character creator, thorough tutorials and RPG-ish story modes are an open-armed invitation to folks who might normally run away from fighting games with their arms flailing. I imagine lapsed fans too, looking at these weird vampires and demons and nightmarish Sonics might think to themselves: “I used to love Soulcalibur. Maybe I could...” But then they'll see the price tag, and all that good will and Dreamcast nostalgia will vanish like a closed browser tab.

If that’s you, I can’t blame you. You could buy a smelly armchair from Greg down the road for £50, and you’d probably get just as much adrenaline and challenge from getting that into your third floor apartment as you would fighting another terrifying Voldo to the death. But the moment this goes on sale, friend, the very moment it drops its guard – you slice open your wallet and let it bleed. Because you’ll never have a friend like Hooves.