People, I face a dilemma. (Great cars, them Dilemmas. - Ed) This week Destiny 2 takes up an astonishing five out of ten spaces on the Charts. So what's a professional games journalist of 20 years experience to do? Write ten octopus facts in less detail but with more jokes, or six more involved entries perhaps better celebrating our cephalopod friends? I've opted for the latter, and I hope you'll endorse me in this decision rather than join the inevitable social media backlash.

Last week I very belatedly discovered the live-streamed adventures of the Nautilus scientific research ship, and their 3000m deep exploration of the sea bed of the Monterey Bay. It's safe to say I became all-consumingly obsessed with this, the feed becoming the primary importance in my life, my wife and son acknowledged if they agreed to watch it with me. It ran on my second monitor 24/7, while little to no work was completed on the first. It was wondrous.

I say "belatedly" because they were exploring since August, and I only discovered it on their last few days of the season. But what a last few days. An in-depth exploration of the so-called 'octopus gardens', followed by some transecting of unexplored regions, and finishing with the surprise stumbling upon a spectacular whalefall.

A week later and I'm watching a live-stream from NASA of the first all-female space walk. And oh my goodness, human beings can be extraordinary and wonderful. (By the way, I can officially conclude that Under The Sea is better than Space, because as impressive as the work of the astronauts on the ISS may be, they have yet to discover a single new species.) 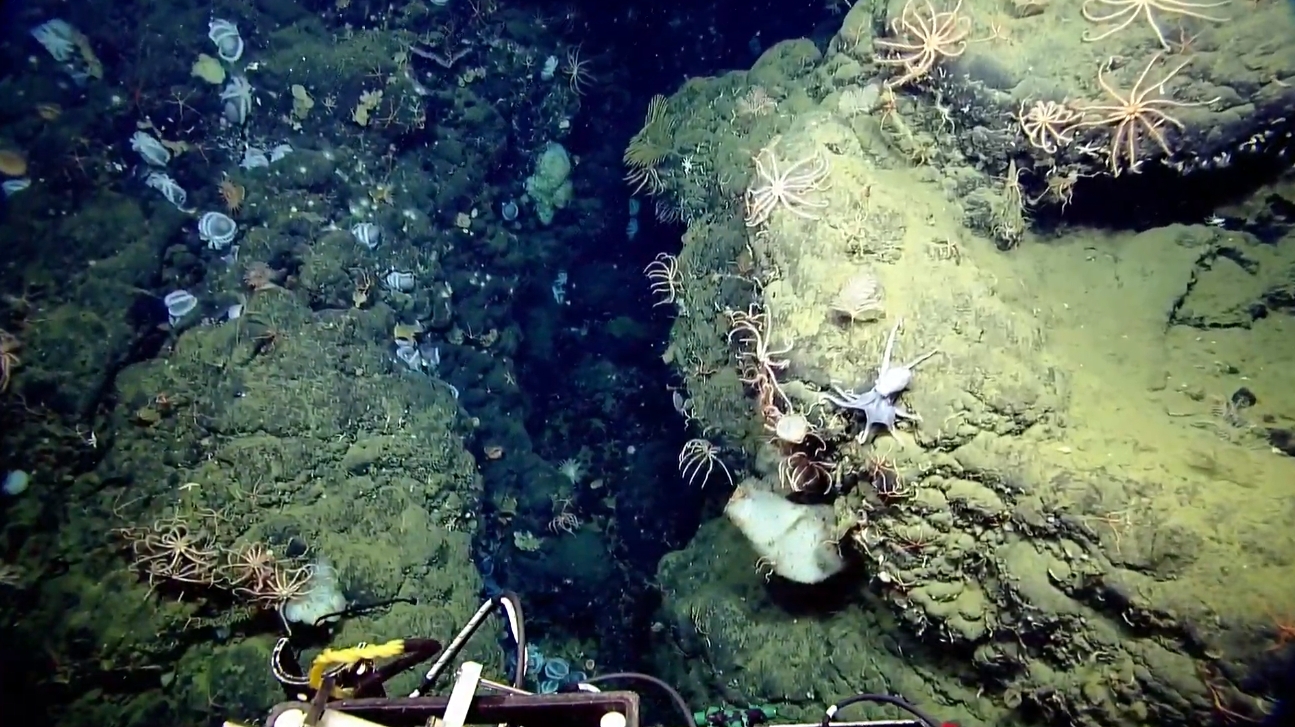 My attention was first brought to the Nautilus Exploration Program, and the adventures of deep-diving ROVs Argus and Hercules, when I saw a tweet about their arrival in the octopus gardens in the Monterey Bay National Marine Sanctuary. Last year, while conducting their exploration of the sea bed in this area, they stumbled upon hundreds upon hundreds of muusoctopuses, brooding their eggs in specific rocky areas. They had no idea why this would happen, most especially since the water temperatures in the area were too cold for eggs to usually survive, so this year set out to find out what was what.

Their hypothesis was that there must be some sort of warm air vents in the area (which proved upon further exploration to be "areas"), and a cursory look at their results suggests this was the case. Warmer water was found in the cracks and crevices beneath the octopuses, after the extraordinary ROV pilots were able to insert narrow temperature probes precisely below nesting octopuses with a robotic arm located three kilometres beneath their rocking boat.

Then in one moment they happened upon an octopus hatching, as it immediately entered into a battle with a shrimp in its first seconds of life. And watch this to the end. 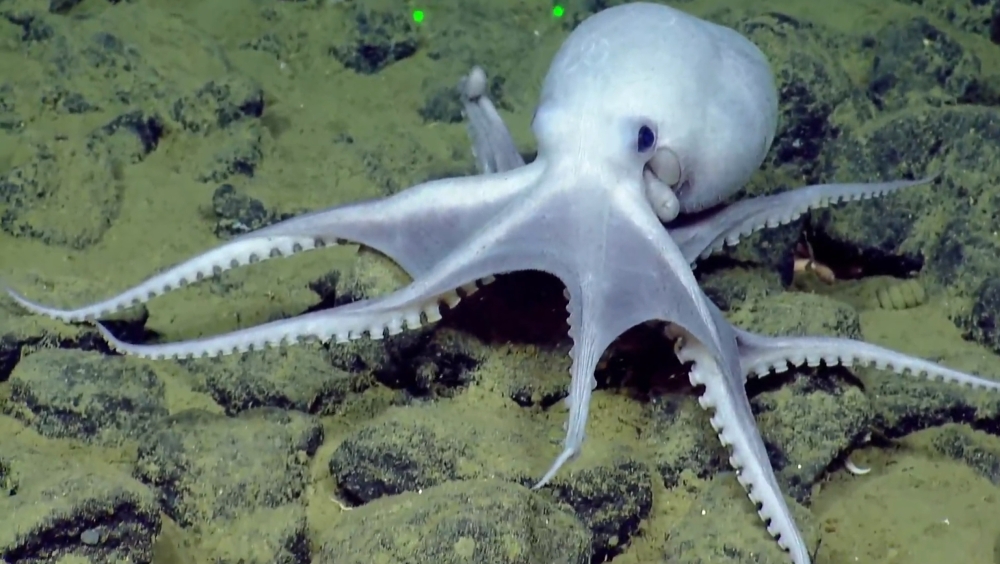 You may be wondering why, in the video above, the mummy muusoctopus doesn't appear to react to the attack on one of her precious babies. The reason is she's all but dead at this point. Octopuses are fascinating for so many, many reasons, but one of the most significant is their unique evolutionary direction. Where almost all other early sea life opted for longevity, octopoda opted for intelligence. The result being a short-lived creature of a brilliance we are only just beginning to understand.

As a very non-scientist person, I find myself genuinely devastated that there's no parental care in octopuses, due to its limitation on their potential. Their young are precocial, as well as precocious, and there's no rearing at all, primarily because both parents are dead or dying by the time they hatch. Males die a few months after mating, via the absolutely horrendous process of senescence. Which is to say they just start to fall to pieces. Bits start falling off them, and they basically just rot alive until they can't be any more, unless starvation takes them out first.

Females that brood die from starvation too, having sacrificed themselves to ensure the safety of the eggs, with both defence and incredibly meticulous care via aeration and cleaning. (The starvation comes about because maturation of reproductive organs is triggered via a hormonal change from, weirdly, the optic gland, which in turn shuts down the digestive glands. Removing an octopuses optic glands prevents their reproducing, but massively extends their lifespans.) Without this literally all-consuming dedication to caring for their eggs, very few would ever hatch, and so it is that no knowledge is passed on from adult to young at all.

This only makes their fierce intelligence all the more extraordinary, especially when you consider the seemingly impossible knowledge required by, say, the mimic octopus to so astonishingly impersonate such a range of creatures.

But just imagine their smarts if there were parenting too. Imagine the potential if their lifespans exceeded half a decade. We certainly wouldn't be going through Brexit right now, that's for sure. Our octopode overlords would never have allowed us to get into such a mess.

General Fuzz is the sort of music I expect octopuses have on their Spotify playlist. This is Comfort Zone. 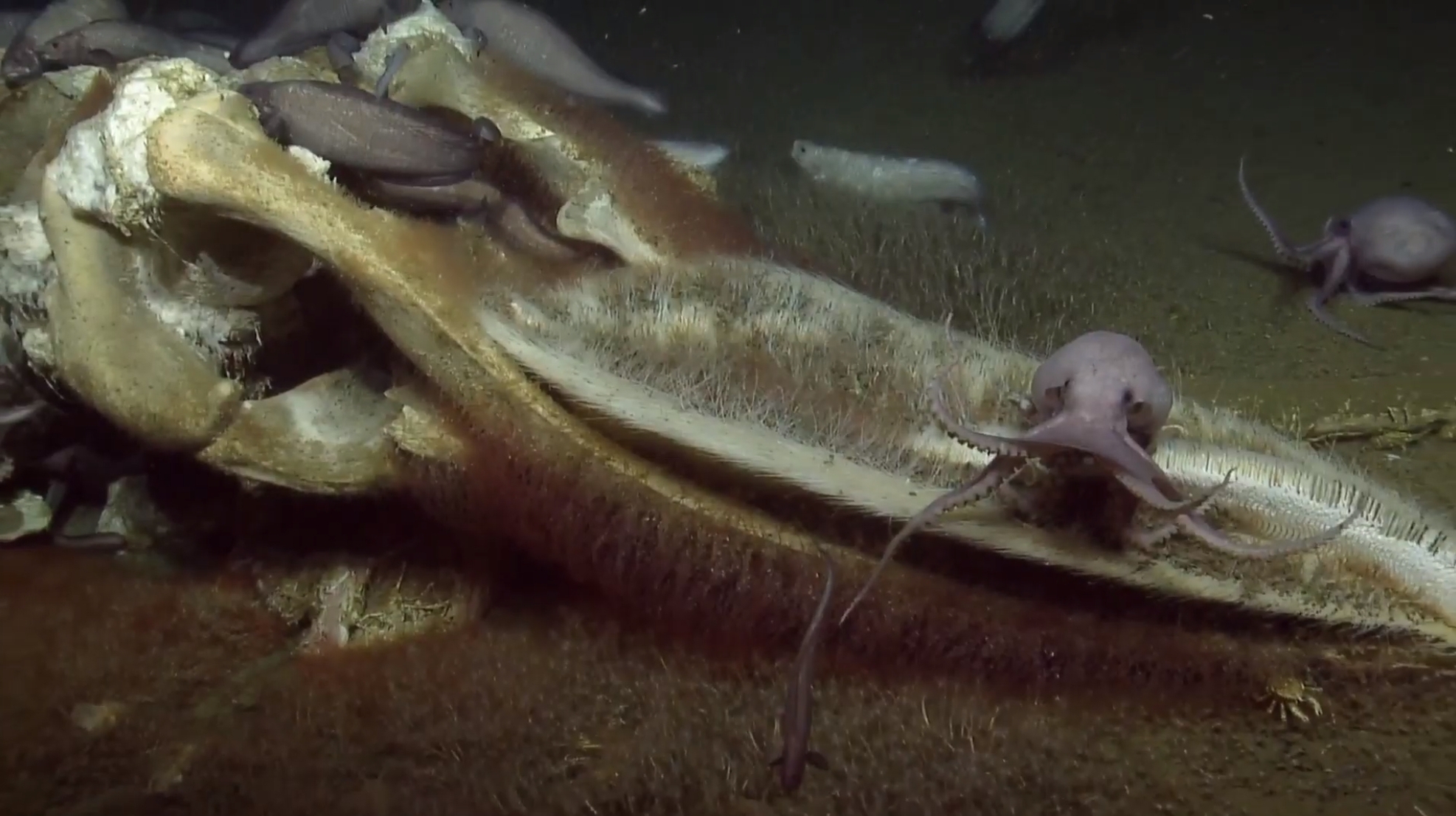 We must get on to the whalefall. This is the relatively common phenomenon where after a whale dies, its enormous carcass slowly sinks to the bottom of the sea. On the way down it's stripped for parts by a fantastic array of creatures, until its remains settle on the seabed and waves of beasties get to work. After a couple of years, nothing whatsoever is left, every last scrap devoured by sea life, some evolved to uniquely survive on such events.

This massive arrival of potential energy in the environment attracts huge numbers of species, but are so rarely observed due to the impossibility of predicting their location, and indeed the difficulty of being able to look at anything happening under such crushing pressures. (That's not quite true - whale carcasses have occasionally been deliberately sunk where they can be scientifically observed, but of course the conditions aren't entirely accurate.) 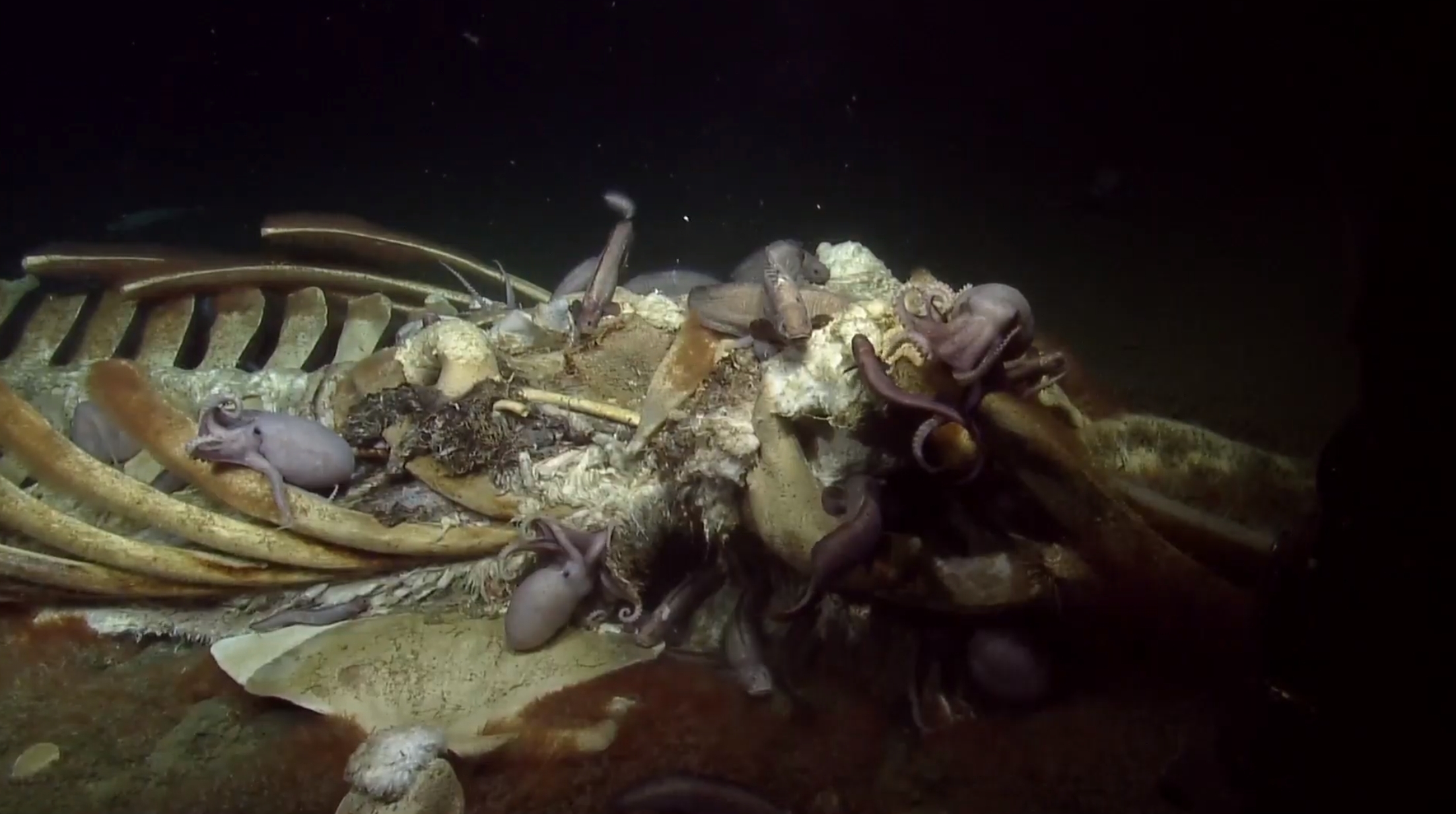 So for Hercules, happening upon one on its final dive of the season was something utterly special, and wholly unexpected. The team had finished a transect, after a slight diversion to follow the edge of a 30m cliff on the sea floor. They were now re-routing back to a pre-arranged unexplored point, the boat to which the ROVs were tethered moving along at a decent speed, when one of the group spotted something on the sonar. Seemingly deliberately not telling the rest of the scientists on shift, they directed themselves toward it, to bring about shouts of crazed delight at the find from the rest. It was a marvellous moment.

They hung about as long as they could, but ultimately had to catch up with the Nautilus before 3000m of cables were unceremoniously snapped. But because this project is ABSOLUTELY BLOODY BRILLIANT, they abandoned all their previous plans, turned the boat around, and spent as many hours as they could back at the whale. Scientists around the world were immediately getting in touch, asking for specific samples to be taken, measures made, and areas probed. Hercules' dazzling array of specimen drawers, containers, samplers, and jars were filled with water, bone-eating worms, whale bones, and even one extremely surprised squat lobster. (My favouritest thing of all about the ROV is that its vacuum cleaner-like attachment is called "the slurper".) 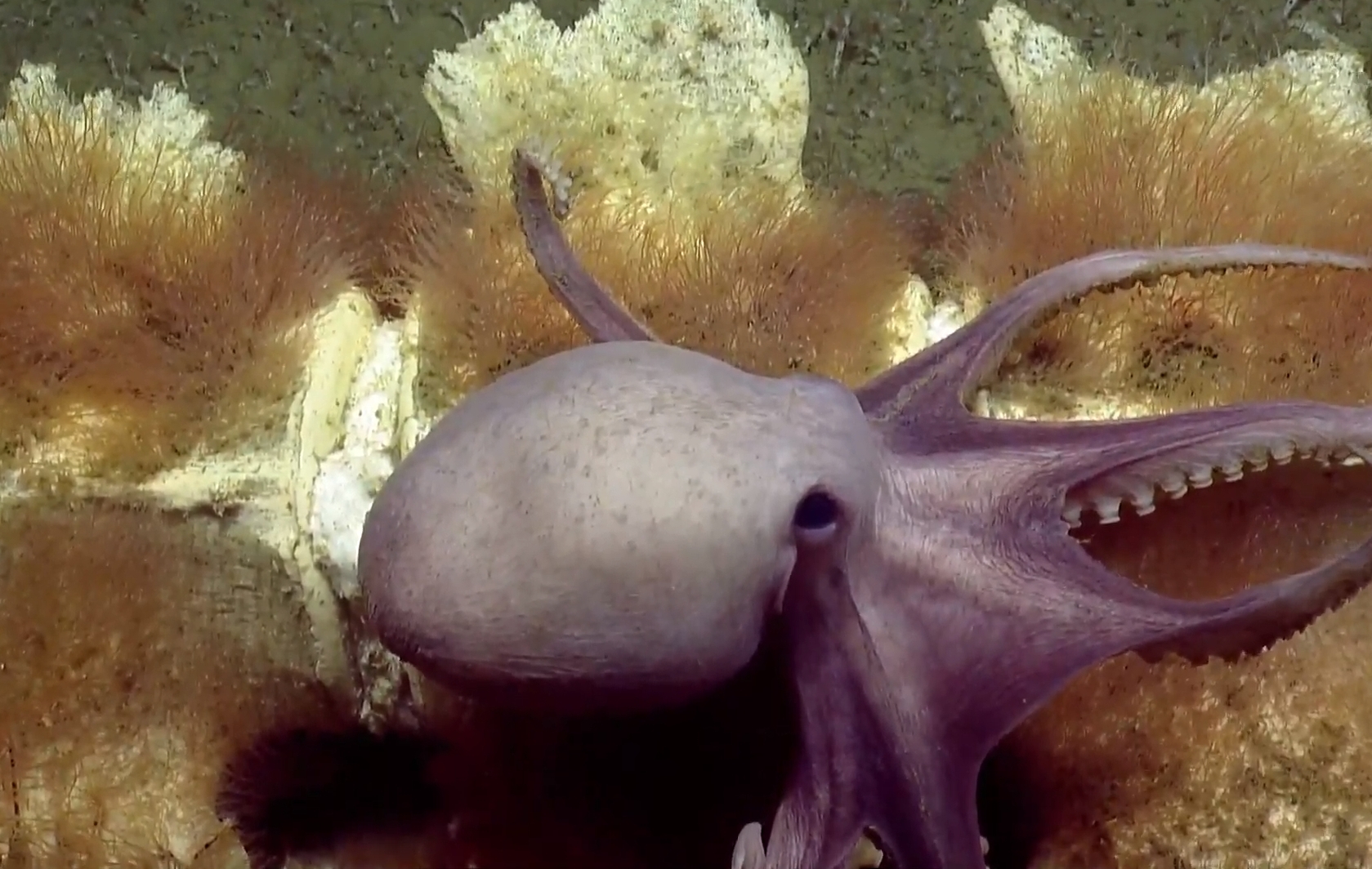 And as you might have noticed, some octopuses had shown up. Which was, at first glance, a bit odd. Octopuses are not scavenger feeders. In the video above you can also see eelpouts, grenadiers, squat lobsters, and just so, so many worms, who are all there long after the sharks and hagfish have had their fill - all of those are proud scavengers, so what were the octopuses doing there?

Then the call came in from someone ashore: they are most likely eating the crustaceans eating the whale.

The reaction from the teams as they explored this find made, and still make, my heart sing. This is people experiencing absolute joy, making discoveries that extend past the end of their knowledge. Listen to how often they're asking questions, rather than answering them. The video above is four or five hours edited down to five minutes, and having watched the whole of it, I can tell you their enthusiasm and delight never faded throughout. As they learned for themselves, either by observation or research, they reported it all to viewers. And here's another extraordinary thing: that viewer count was about 3,000. And most of the rest of the time time they had about 250 people watching. And yet they were as committed to their sharing of knowledge and their excitement at their jobs as if they were broadcasting to millions.

(They also gave a shout-out to my son, Toby, cheering that he was allowed to stay up past his bedtime to watch this, so I love them even more.)

It was incredibly special, and I feel so honoured and fortunate that there are so many scientists out there who are sharing their research so openly and publicly, positively encouraging people to screengrab and share the unique footage that only their hugely expensive equipment could capture.

And I'm also rather delighted that I've somehow managed to establish enough precedent while writing this ridiculous column that I can get away with writing about this here. 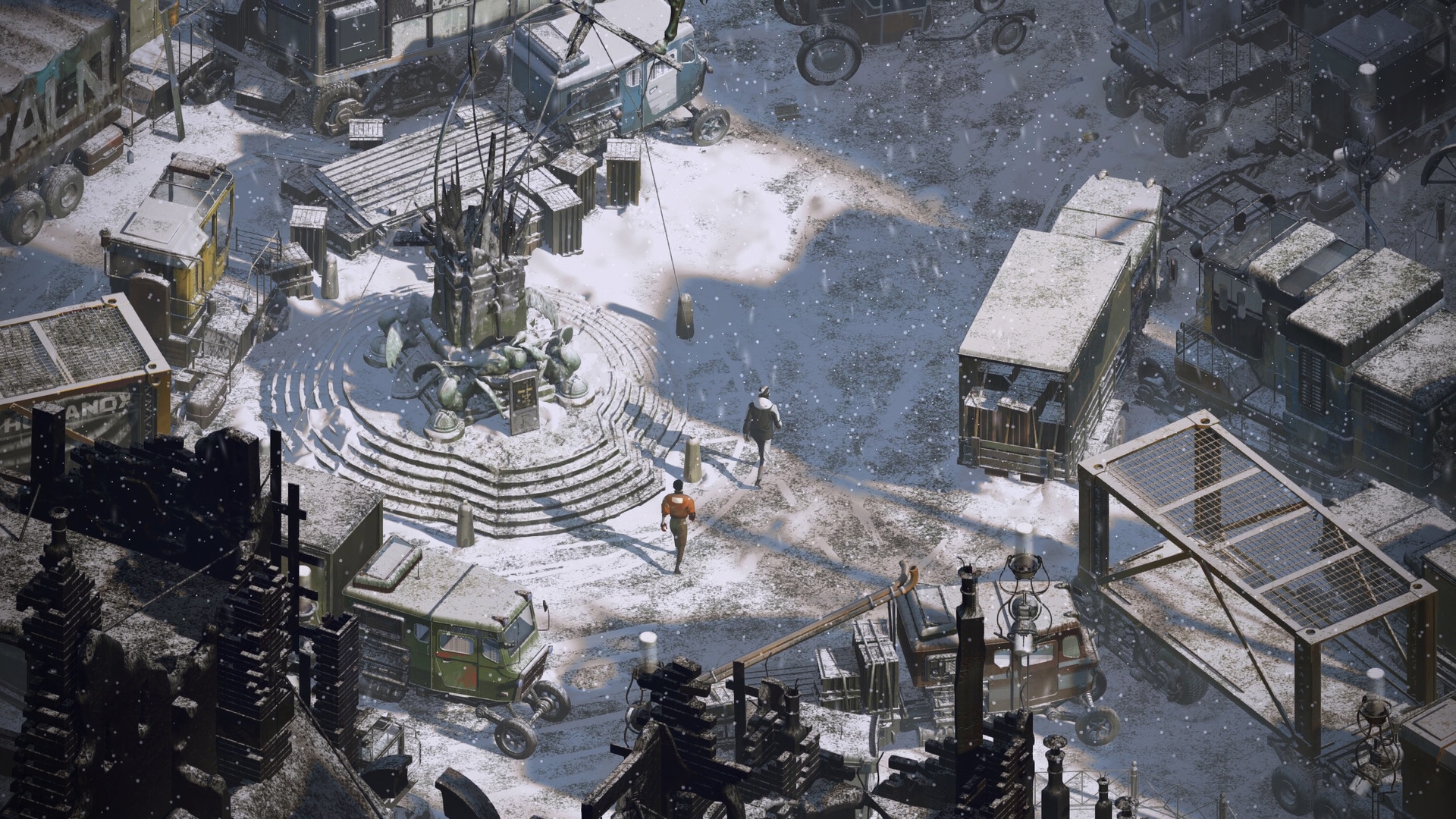 OK, I'm not going to ignore this extraordinary feat. For such a peculiar and experimental and seemingly niche RPG to out-gross the rest (although, let's be honest, it'd be whomped by Destiny 2 if it weren't sold in fragments) is incredible work. Huge congratulations to ZA/UM, a studio who at times during development were literally starving artists, living in a freezing squat in Estonia, blankets nailed to the walls to attempt to stave off the -20C Winter temperatures, unable to afford bread to eat. I mean, that's kind of a big deal.

You can read Alice's review here. I can't wait to find time to play it.

The Steam Charts are compiled via Steam's internal charts of the highest grossing games on Steam over the previous week, then largely ignored when cool shit happens under the sea.