A funny old week in the charts, which is to say, H1Z1 and The Witcher 3 have been shoved out by the hatrick of appearances from Stellaris. Also it's worth noting that Dishonored: Death Of The Outsider has disappeared after just one week, which seems a bit of a shame.

Oh, and as correctly predicted last week, absolutely no sign of XCOM 2 making nearly as much money now it's back to £34.99 for both the base game and the War of the Chosen expansion. Shocking! A free weekend plus a 50% price drop are the reasons we see slasher-me-do Dead By Daylight peeking back into the top ten. Adam is all kinds of in love with the game, probably because he's a real life superhero I imagine. Here he talks in detail about how to best kill baddies, for instance. Here he talks with the sort of insight only a superhero could have about how to cooperatively thwart his own pursuit.

So, what's all this about then? Well, it seems that Paradox have had the smarts to discount the base game massively to coincide with the release of the Synthetic Dawn story pack. It's been down 60% for all incarnations (vanilla, Nova and Galaxy editions), while the already-discounted DLC bundle including Utopia, Leviathan and Plantoids has been down 41%. Then Paradox's strategy bundle containing four of their games is down a whopping 73%. Put that all together and you get a profit spike that sees the game take over this week's charts.

Utopia, this entry's DLC pack, is only down 20% on its own, costing £12 alone. Which is a frankly terrible deal when the DLC bundle above is only £4 more and includes the original game, this, and two other packs. Doh. Here's Fraser's review of Stellaris: Utopia from April this year.

Hello, you say inquisitively, and then add, What Are Rockstar Spending All The GTA V Money On?

Harpoons for hunting the poor

Really surprised to see this clinging on for a second week, in a world where somehow games like Dishonored do not. It's still getting utterly pounded in Steam reviews for its ugly microtransactions in a game that already costs a mammoth £40. (Or £110 if you're utterly insane.) But clearly enough people want that, and will want it when it says "19" at the end, and "20", and "21", and... No one knows the truth of how these charts are calculated by Valve, the best guesses understood to be a combination of those products which have made the most profit (rather than sales) and a wizened old man in a darkened room casting bones across the stone floor. So it's hard to infer too much information from the order in which the three Stellaris entries have appeared. Stellaris here could be a combination of any number of the bundles mentioned above, as indeed could Utopia's.

But it certainly suggests that Synthetic Dawn's #3 position below is the result of some quite spectacular sales of a piece of DLC, since it can only be bought on its own on the Steam store at £7, not included in any of the seventy-three different bundles. Still, great to see the base game selling so well at its discount, well over a year after its original release.

Here's Adam's original review of Stellaris, and here are some fun tales from within the game. Oh, and here's my plaintive complaining about how inaccessible I found the whole thing. 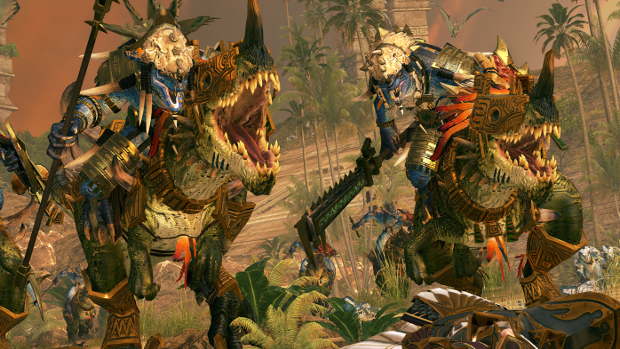 The impending release (three days) sees this re-enter the charts based on pre-orders alone. Pre-orders at full price with no reviews just yet. To get access to the game no sooner than those who wait. Sigh.

I went to Cornwall this weekend, and found this fucking terrified building:

I thought you should know.

So, yes, as said above - a £7 product ranking this highly in charts seemingly made from cash raked in is quite the most astonishing thing. Or, perhaps, isn't? We don't entirely know. It'd be quite the thing if Paradox were to reveal sales numbers at this point, as it'd allow us some vital information for interpreting the order in which we see the top titles appearing here.

Either way, it's proof that Stellaris is really rather popular, and people wanted them some robot races.

A second week in a row in the spot everyone's calling, "Basically the top spot because Plunkbat doesn't really count any more" for the utterly splendid DOS2. So it makes sense here to link to Adam's review, my excited anecdotes, and our shared chat about how much we're enjoying it. But instead I want to talk about the number two.

DEVELOPERS, YOU NEED TO DECIDE WHICH "TWO" YOU ARE USING!

PICK ONE OF THEM.