John is elsewhere this week, squeezed into Brendan's luggage for a flight to San Francisco and the Game Developers Conference, so I'm here for the regular rundown of last week's top-selling games on Steam. This week, the letters R, A, and S are well-represented with strong showings from both Mars and rats.

Ubisoft's open-world FPS won't launch until next week but pre-orders have already pushed it into the top ten. Apparently pre-ordering gets you some bonus clothes, a gun, and other bits and bobs? Ah, but I suppose plenty of people already know whether they're going to buy the game or not. Far Cr 5 will do those modern Far Cry things in that modern Far Cry way, following an established formula which largely promises a minimum level of quality. The story will be less clever and subversive than it thinks, the antics and mayhem will be fancier and sillier than the story would suggest. I'm certainly keen to engage in cooperative multiplayer foolishness myself. Cars + guns + pals = good times.

Our Alec's Surviving Mars review is full of excitement about growing spacepotatoes and spacebabies in the interplanetary city-builder. Spacepeople seem so very excited about the prospect of spacepotatoes these days (I think because of some Mark Wahlberg movie?), though without spacebutter, spacecheese, and spacebeans to make a decent jacket spacepotato, I don't think I could be persuaded to leave Earth. Dream bigger, spacefolk. 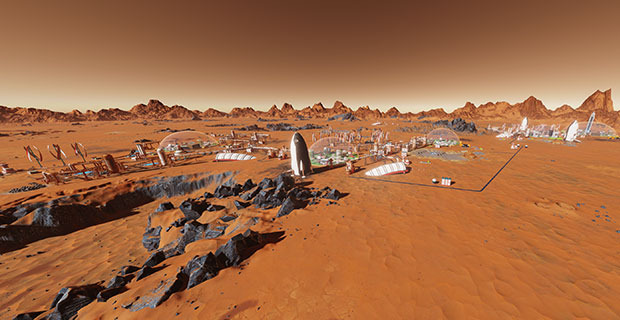 A magical fantasy kingdom with alchemy but no wizards, elves, or big scary monsters? I'm not sure about this. Would it kill the devs to add a dryad or two? Or at least a good selection of pointy hats for the much-vaunted armour customisation system.

We don't post about Counter-Strike much these days, perhaps because it's such a staple of PC gaming that it'd be like observing "Say, have you seen those there walls we have these days? Keep the wind right out." CS: it's still here, people still really like it, I'd be very surprised and confused if it went away.

Automata was one of my favourite games from last year and I still think about parts, but after finishing it I didn't want to return even for the DLC and to tick off all the little jokey extra endings. I don't know if my heart could take it. Let sleeping warteens lie. Why's it back in the charts this week? Because, aside from being great, it was half-price for a few days. But wow, it is still wild and weird that, one year after launch, players still need to turn to a mod to fix some wonky bits. Poor showing, Square Enix.

The 'Left 4 Dead with ratmen and a lousy persistent progression system' first-person smash-o-shooter is pretty good fun, going by the few maps I've played, and enough people are into Vermintide 2 to put it into the charts twice. £9 extra for the Collector's Edition gets you alternate skins for the ratmashers plus the soundtrack and some other cosmetic bits, which seems pricey but the game isn't expensive so sure.

In a break from tradition, the customary Charts song will appear in this position.

Oh, hullo again! I'd guess the other chart place was pre-orders? Moving swiftly on to something new...

Rats! And here's the regular edition. For a more informed perspective, check out our Alec's Vermintide 2 review. "Vermintide 2 might be shameless about its inspiration, but, critically, it recreates it really, really well, at a spectacular scale," he said. "I can't speak to whether I'll still be showering the land with rat legs a few months from now, but I fully expect to happily spend the next few weeks, at least, knee-deep in the rodent dead." Well, mod tools are expected in April.

I'm no longer playing Plunkbat as intensely as I once did, but that's how most competitive multiplayer games go for me these days. I still like it and will fire it up when the lads call, but I'll not often instigate. I am keen to see the new 4x4km map, though, and the last big patch was a welcome round-up of fixes and improvements.