We've diligently posted about DLC and similar gubbins for Surviving Mars, Haemimont and Paradox's good-ish space colony management game, over the past few months, but one thing we've not done is dip a finger into its red soil to check whether or not it's ready for new life to grow. Along with the DLC - most of it free - there've been a few major patches, which include trying to streamline the finickity interface, add more variety to the otherwise one-note geodesic domes and generally save us from falling into a black hole of needless micro-management. This month's 'Mysteries Supply Pack' free DLC having caught my eye, I though I'd quickly establish the grass roots of a new colony to see how it's all doing.

I'm still playing, a dozen hours later. Subtle changes have massively refreshed Surviving Mars - with the game feeling this much better after three months, I'm so excited to see what it's like after a year.

A big part of that is because it doesn't waste my time in the same way. At launch, I was constantly flicking through status screens to establish what I had shortage of, or who was unemployed or mad or homeless. Last month's Curiosity patch sorted that right out, swapping out the big' ol pane-of-stats that ate the right of the screen for a neat taskbar along the top, showing quick summaries of my colony's ins and outs. A bit more like a modern Civ, in other words, but some traditions exist for a reason. 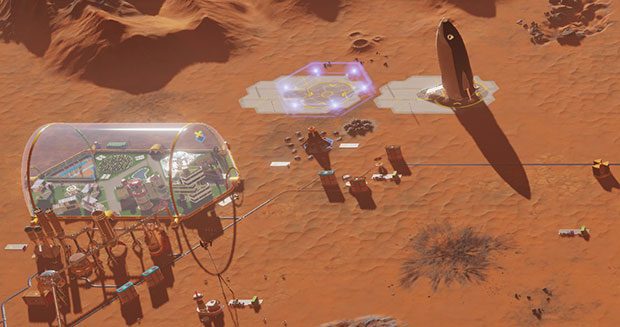 It's not 100% elegant yet - I'd like a bit more click-to-jump-to-unemployed/homeless settler, for instance, but it's a sweeping change. Psychologically, I feel like I'm achieving things or solving problems almost all the time, as opposed to before, where I felt like I had to do a bunch of filing before I could go out into the field.

The other thing I'm digging the hell out of is the new types of dome (another patched-in freebie). It's not because of the shapes - triangles and tubes to go alongside the existent, well, domes - but rather because these new, often more affordable and Tetris-able sizes encourage more thoughtful and reactive colony-building. Previously, I'd stuff anything anywhere, as each 'big' dome was effectively a self-contained colony. Now, I have tube-domes full only of farms or factories, triangle-domes that act as campuses for education and research, with the big, main, domey domes now hives of life and leisure that my colonists commute out from. A new order, and a new way to tinker and finesse until all is neat and efficient. 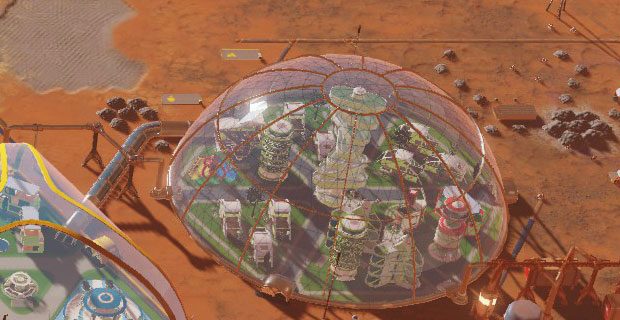 In fact, the single greatest addition to Surviving Mars over the past 15-odd weeks are tubes that connect domes to each other, so folk can trot safely between them to reach a workplace, school or university. It's the most obvious thing, but it transforms your colony from closed hives full of whatever to one, big, networked base. It's the difference between a bunch of far-flung tents in the desert and an actual space-city, and it makes the game as a whole feel so much grander. I find myself making much longer-term plans now, as opposed to simply 'if I can just build x....'

I think there's more that could be done - colonists still feel so anonymous, for instance - but these small changes have had a enormous pay-off. i fully expect to be growing space-potatoes for a long time to come.