Ah, religion. I know this is a topic we all have trouble agreeing on. But fear not, humble practitioner of a good pray, I am not here to squint angrily at your favourite book of life advice. I’m only here for the videogame religions. The ones that are very, very, very, very bad. You know, the gun-loving cults and the xenophobic people-burners. The (mostly) fictional religions that involve an uncommon volume of murder. Step this way, sprinkle yourself with some of my 100% genuine oil of the almighty, and peruse the 9 most dodgy religions in games. 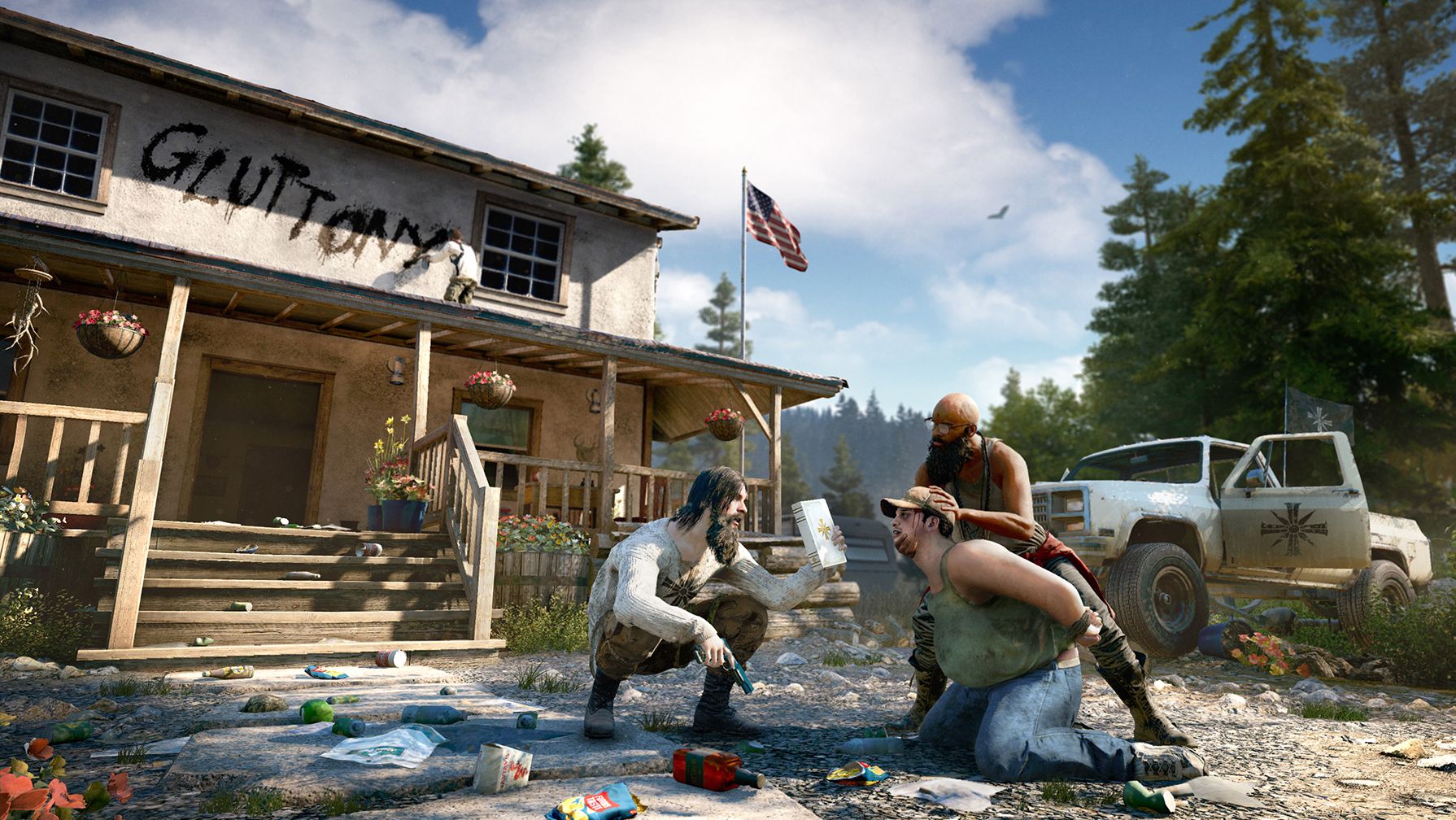 Joseph Seed is the leader of this cult to end all cults. He is David Koresh with a better logistics department. If you join Eden’s Gate, you get a dose of excellent drugs and a free 9mm pistol. Which sounds good! But hang on, it’s a trick. Because you will also have to endure constant banal preaching and snot-nosed eulogies from the shepherd of this flock. You will receive an abundance of nonsense from a topless John the Baptist in tinted aviators. He will not stop banging on about the Big Fella. You’d think a man-bunned hipster with the Independent Truck Company logo tattooed on his back would be more chill, but no. He’s furious. He has lost it. He thinks the world is going to end in flames any day now. Which is ridiculous. 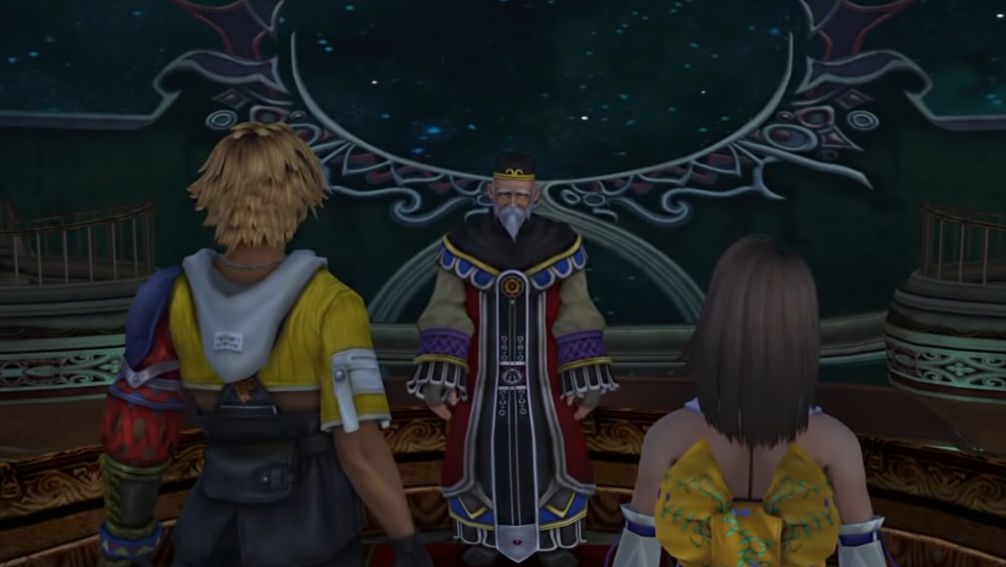 Imagine the Pope, yeah? But he really hates cars. And planes. And computers. Basically any machine more complicated than a big windmill. Well done, you have imagined the Grand Maester of the Yevon church. He is king of the Luddites, and wants all your tiny robot friends to die and go to robot hell. He is also a racist. The church has some goodies, obviously. Like your pal Yuna: a quiet country girl with a hobby of collecting huge ancient Pokémon, and a knack for ritualistic absolution (she wiggles her staff and fertilises the sky with souls). One of the church’s core beliefs is that every so often a summoner like Yuna has to go on a lengthy pilgrimage to rid the world of sin.

“Sin” is a giant armoured fish. Don’t join this church. 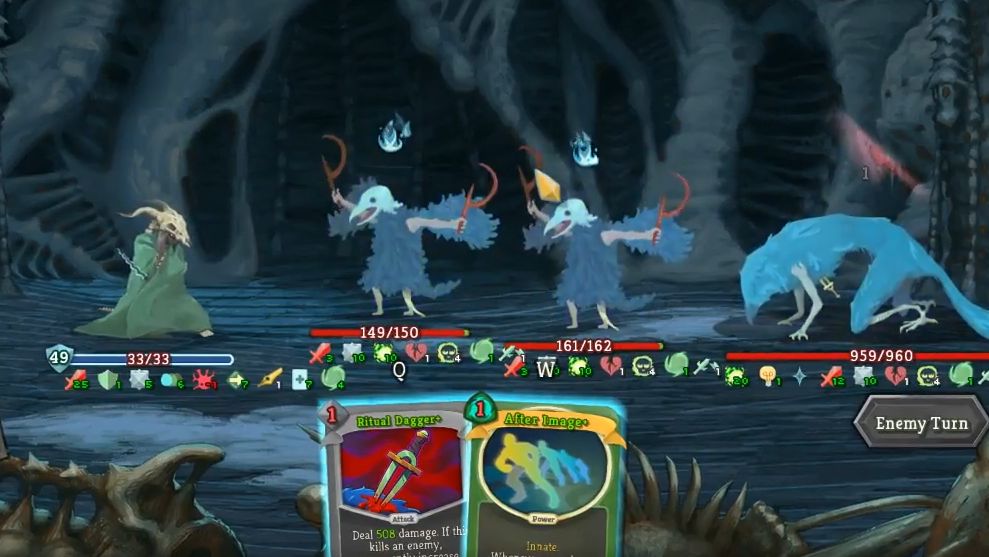 It is this card game’s greatest trial, to be presented with the sensuous cry of “CAWWWW CAWWWWW” and fend off the urge to join the noble creatures inflicting it upon you. 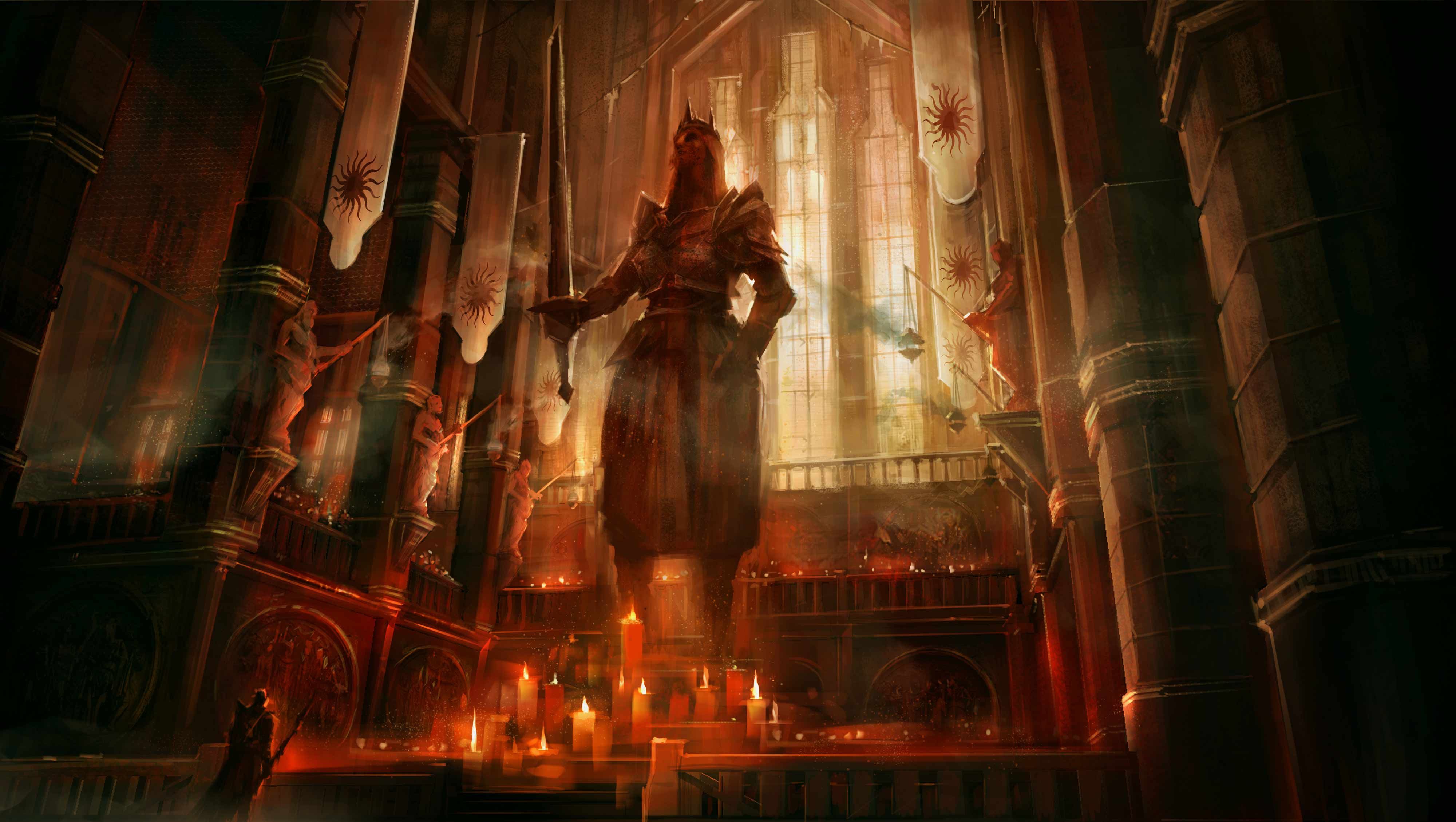 The flavour of this church is 'monotheistic warmongering'. They praise a vanilla god called The Maker, and also his prophet on earth: a lady called Andraste from Bumtown, Nowheresville, who the Maker started to fancy after they met in the woods or something. It is the classic tale of a big god lad aching to bang a human lady, to the subsequent detriment of millions of people for centuries. Nice one, mate. Still, the Chantry is backed up by quite a big lore-hoard, including a holy book, psalms, and the occasional spin-off cult that worships dragons. The church also became a matriarchal institution at one point. But once Andraste, the Maker’s mistress, snuffed it, he decided the races of the world were not worth bothering with. So he clocked off, and hasn’t clocked back on since. Burnout is real. 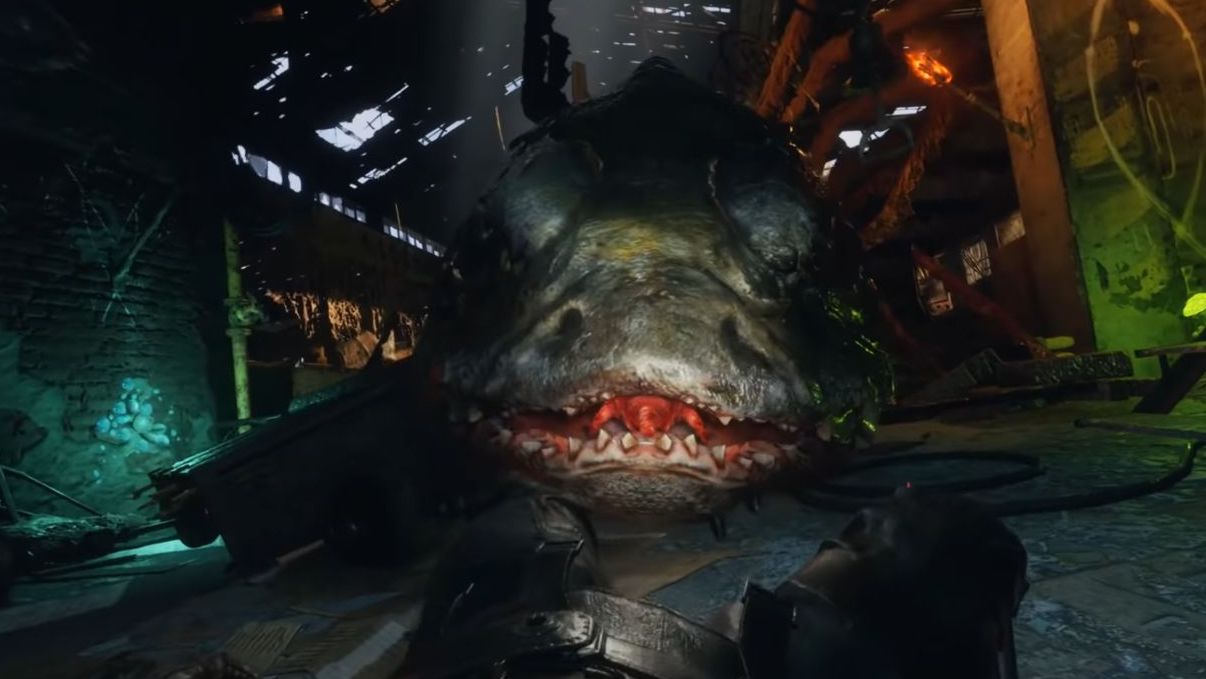 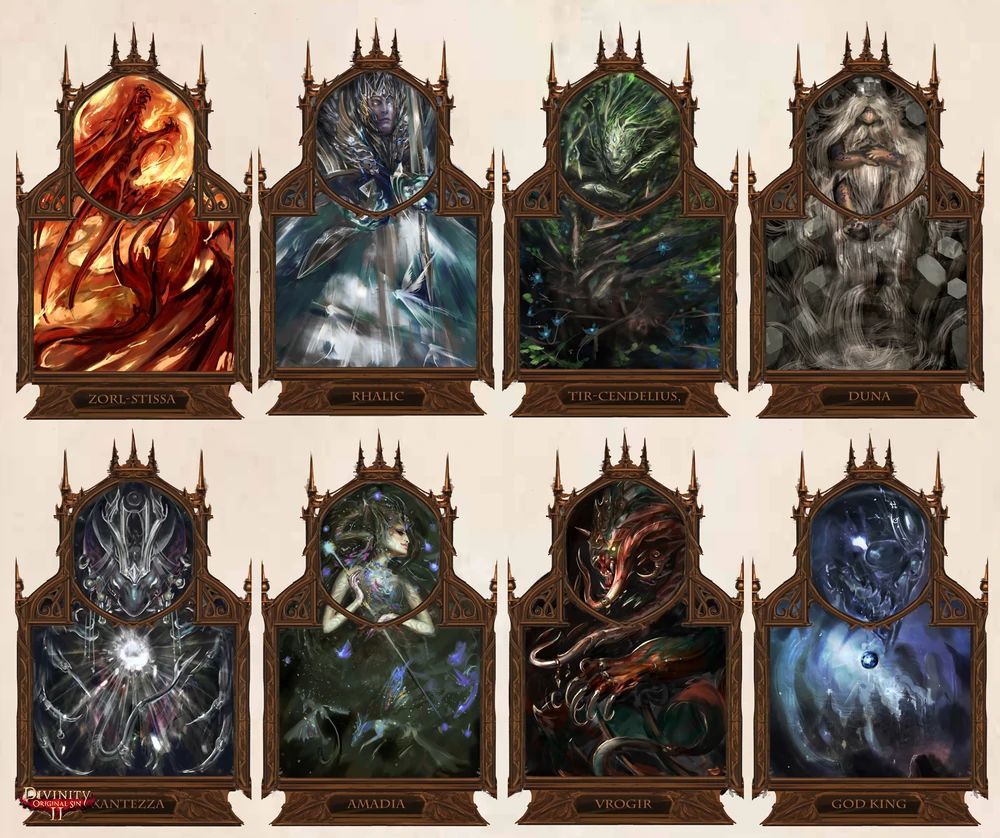 A pantheon of assholes. There are seven of them, because it means a god for each of the seven fantasy races in this blood-puddling RPG. You’ve got your human god, your elf god, your lizard god, and so on. They are all vengeful, irritable spirit gangsters. When a normal person of the physical world dies, the gods suck up their soul energy. As a result, these seven divine jerks like to play war with their pawn-people. To them, it's like having a game of chess where you can eat the pieces. Checkmate-flavoured sandwiches. At one point in their puppeteering, they get so annoyed with you (for being bad at your job) they outright attack you. It would be nice, you think, if there were some sort of eighth god to choose instead. And oh, look: there is!

He is a fascist skeleton. 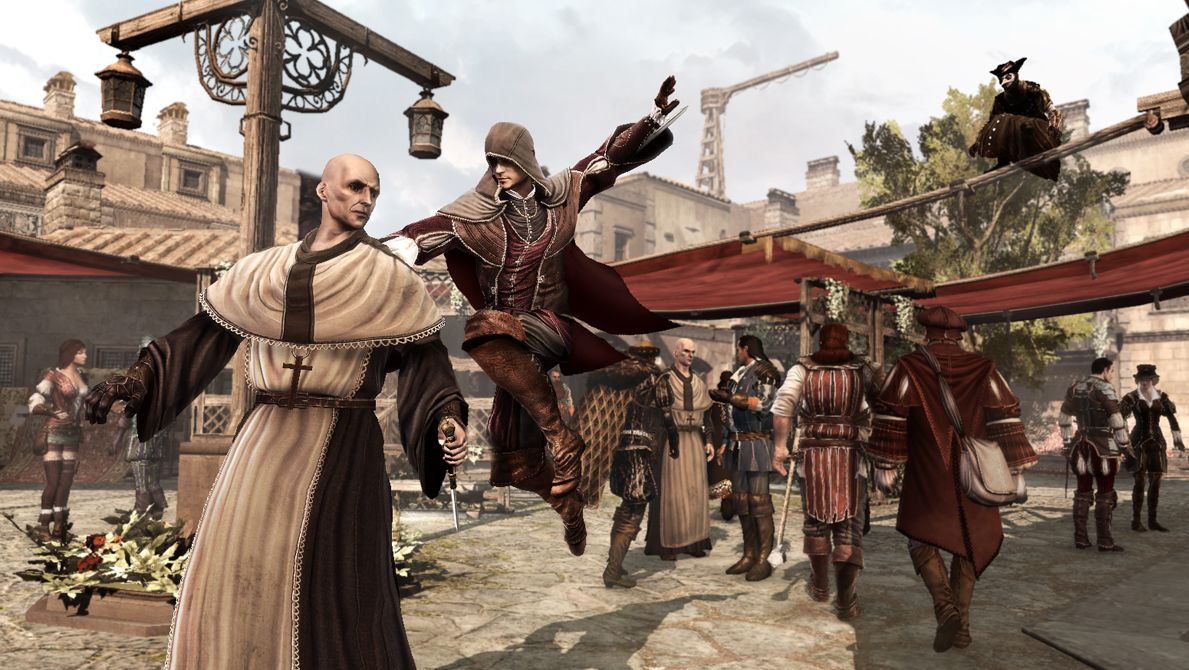 The worst thing most people find to say about the Pope today is that he hates it when you touch his hands. In Assassin’s Creed II, however, the pope is a conspiratorial aficionado of poisoning people, and a hoarder of long-lost technology. He has people hanged and hits you with a stick. He is not as bad as that Pope who once put a corpse on trial. But he is pretty bad. 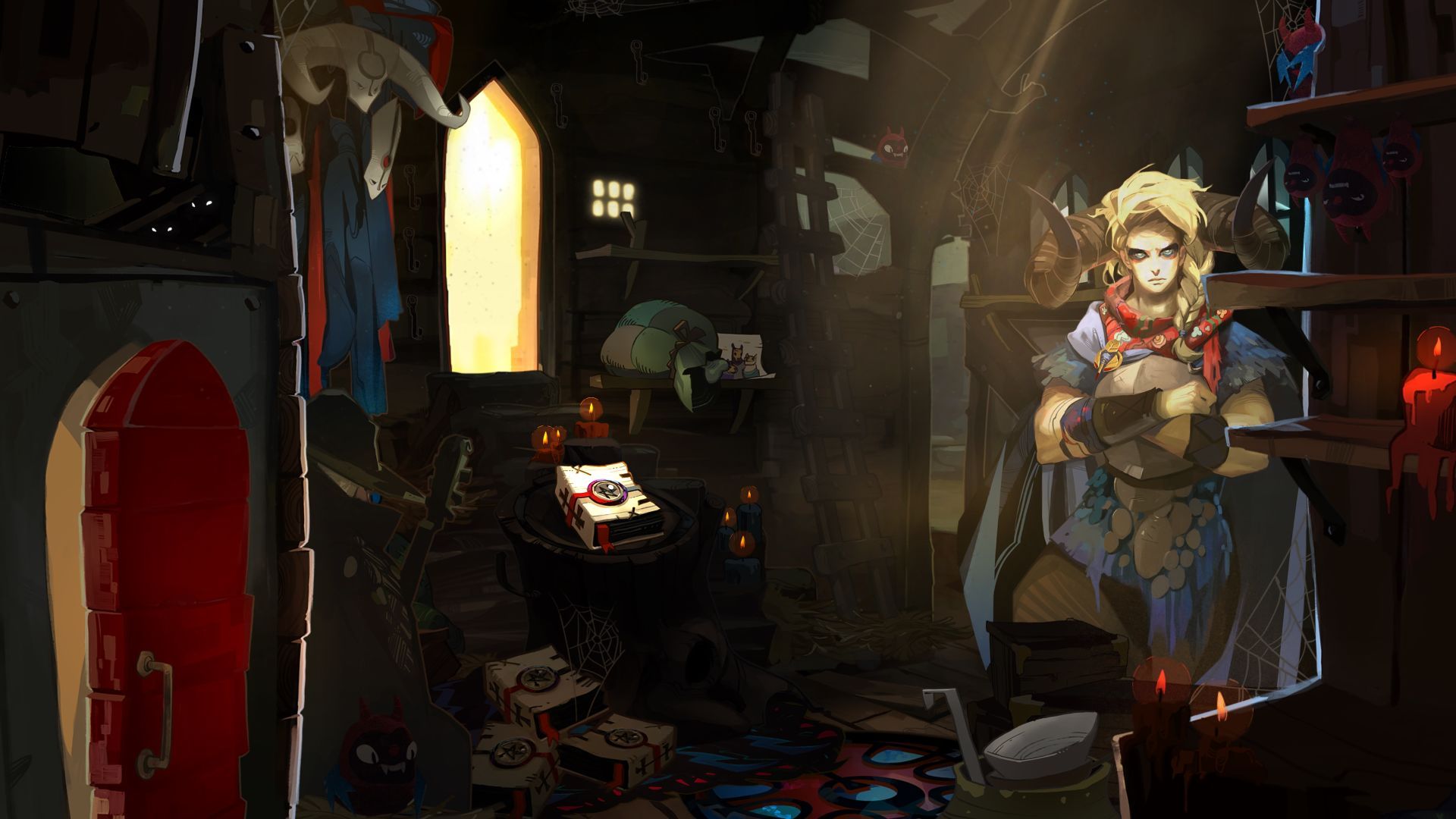 The land you roam in this mythical netball ‘em up is called the Downside, and it is prison, purgatory and banishment all rolled together in one handy landscape. You get exiled here by the theolords of the upper kingdom when you’ve done something naughty, such as read a book. It’s dreadful. Everyone up there is foaming at the mouth with praise for eight ancient “scribes” - essentially gods - so much that they’ve banned reading. But as you and your RPG pals stumble through the world of exiles, flipping through an old book between games of a weird traditional undersport, it starts to seem likely those old gods were just chumps like yourselves, their stories twisted and mythologised thanks to eons of oral storytelling. Could organised religion be the centuries-spanning product of incremental misinterpretations over the life of long-dead rebels? Nah, let’s not think about that. Let's just play netball.

The Church of the Eternal Fire - The Witcher 3: Wild Hunt 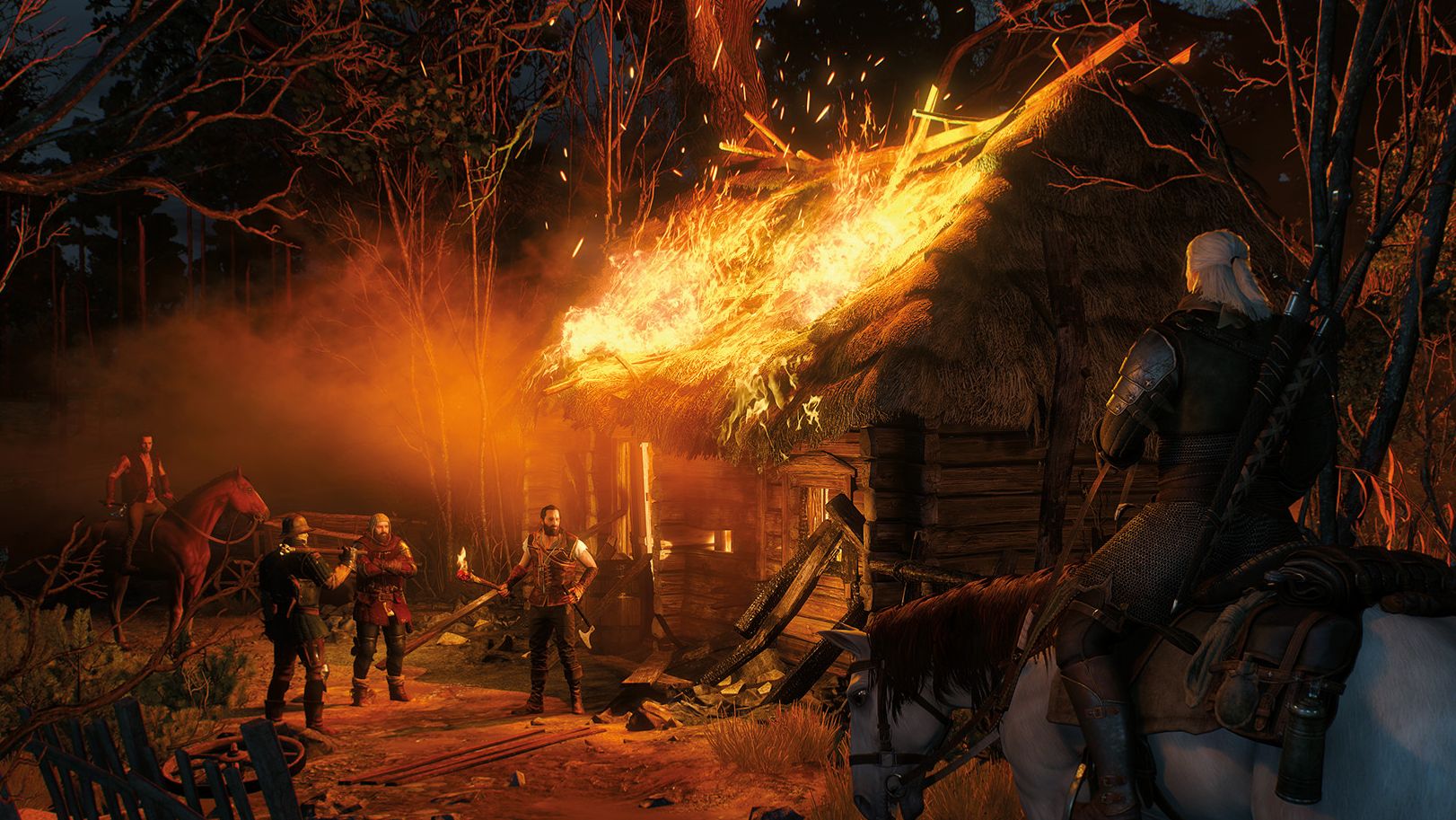 These folks are a lot like the Chantry from Dragon Age, insofar as they are witch-burning wheezebags, more or less resembling the Catholic Church of Medieval Europe. They’ve got their own inquisition, they hate a mouthy woman, and as far as they're concerned, if it looks a bit weird, it’s definitely worth putting on the blasphemy barbecue. They do not worship a god as such, and instead opt for being really keen on pyrotechnics. The Church’s leader is a man called - don’t laugh - Hemmelfart. I said don’t laugh. They burn you for laughing, you know.

Last week we gathered up the 12 most extravagant lines of dialogue in games. And thus, to borrow a phrase, every pain of the soul of all kinds were visibly and tangibly manifested, everywhere and in all of us. But you chose one of these lines to downgrade to the status of “not that extravagant”.

Biker Girl Claire and Raccoon City's newest Leon get the chop, thanks to list inspector "ShadowsSun", who makes a good point, saying that their exclamations are simply:

"...a perfectly reasonable reaction to being chased by an unkillable seven-foot tall fedora-wearer. No pompous philosophical contemplation on the implications of running from your problems, or a frightened assertion that Mr X is a divine punishment for their inability last Thursday to choose between green- or red-herb brand energy drinks, just a short, unrehearsed expression of the fact that they really, really would like to not be here."

See you next week, listocrats.