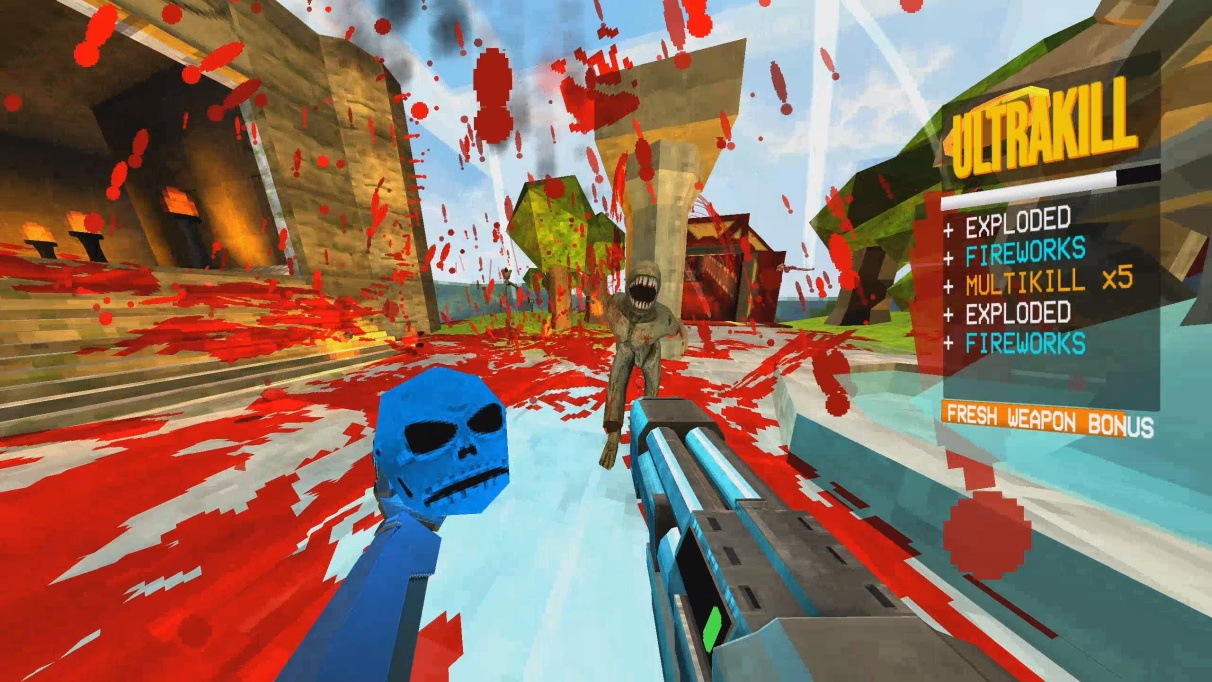 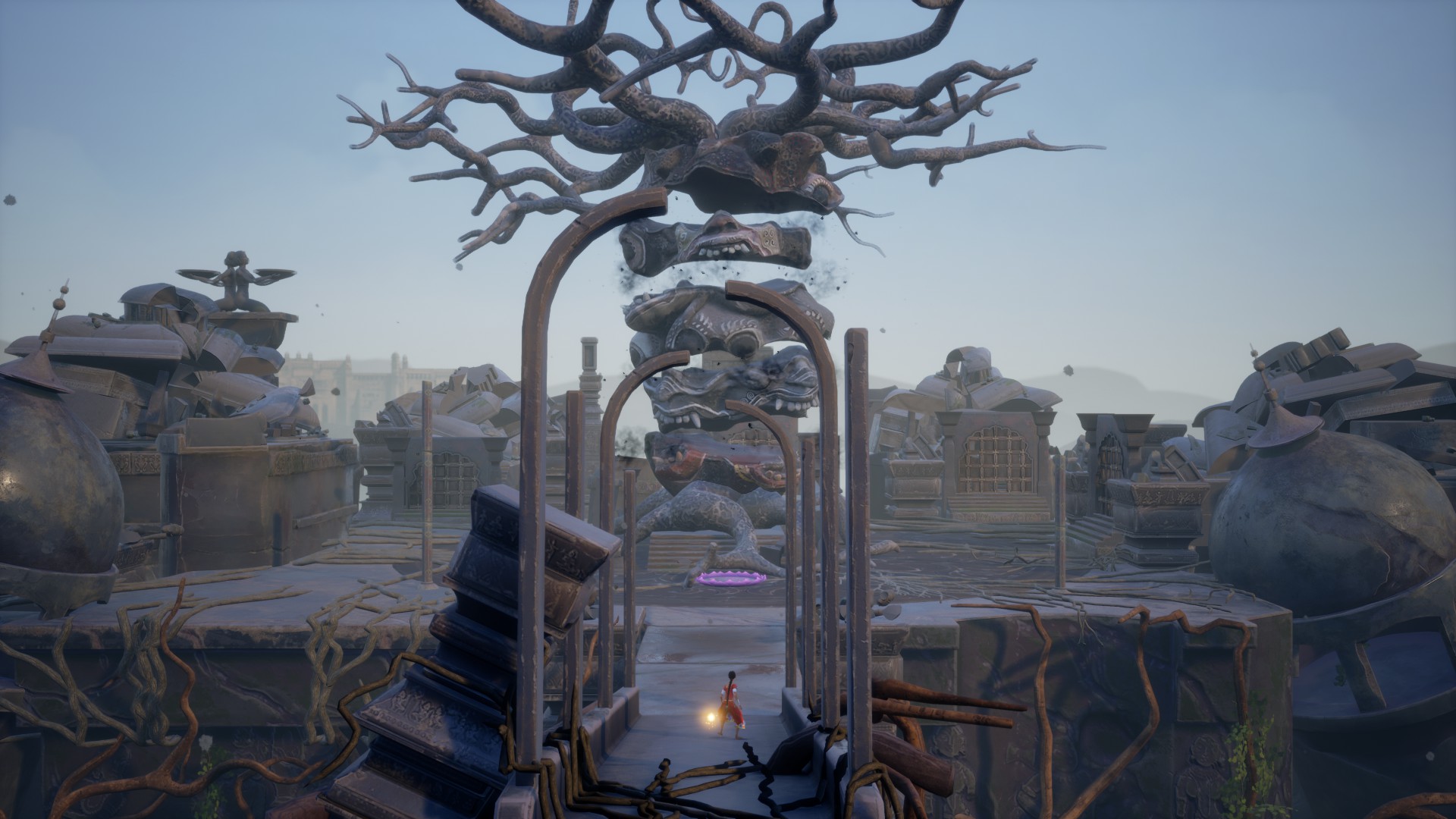 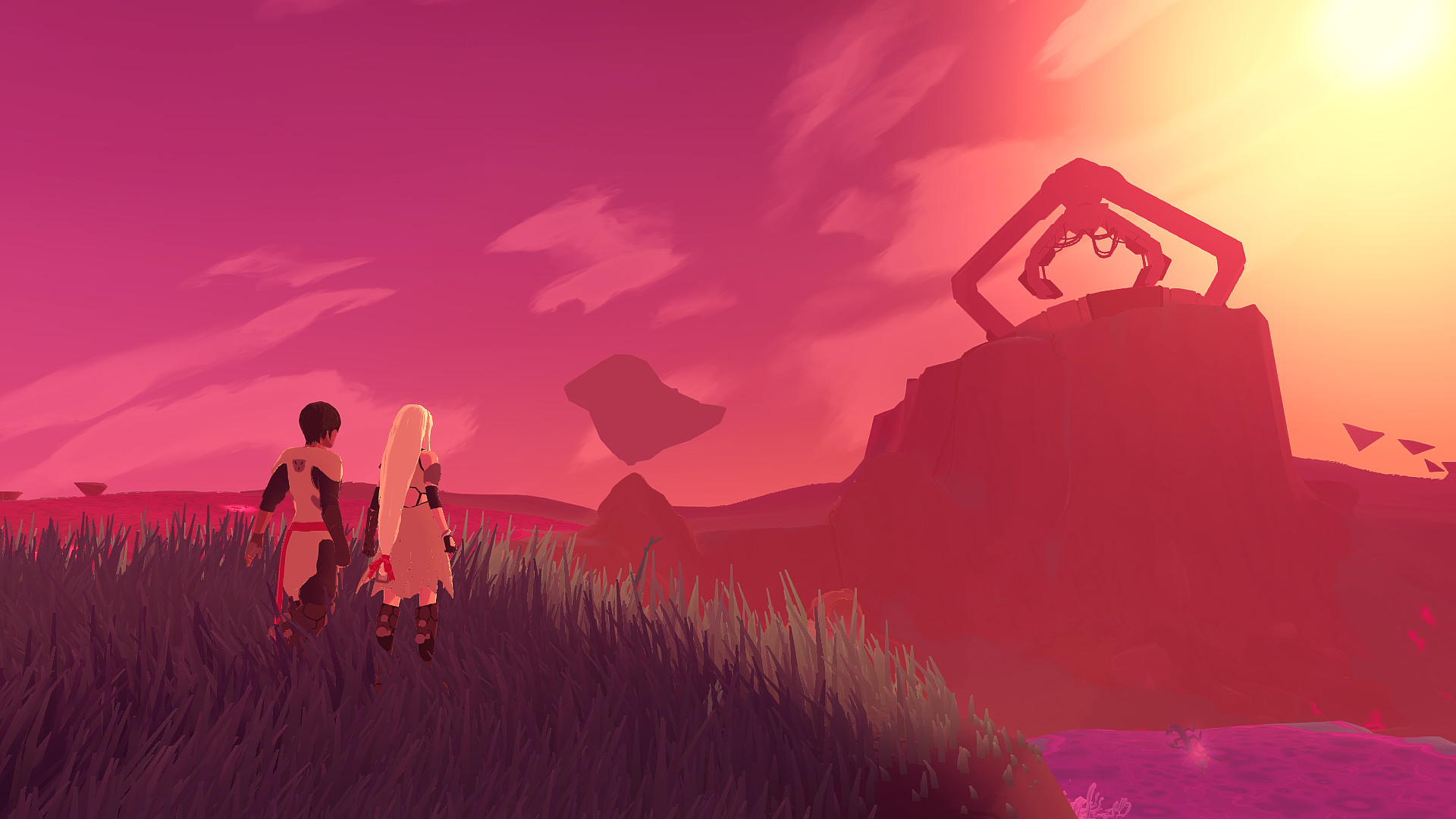 I can't keep up, readers. A constant hoseworth of new games is one thing, but between mega bundles and a dozen streaming events, this month has become an avalanche of games. The Steam Game Festival has flung heaps of promising games in our direction. Frankly, far too many of them look good. My brain cannot parse this kind of volume.

So. Let's stick with the action games, yeah? Yes, it's a nebulous category. Yes, I've cheated and put in at least one that you could argue technically doesn't belong. But do you really have time to worry about that, when you could be playing more of these demos instead? Exactly. 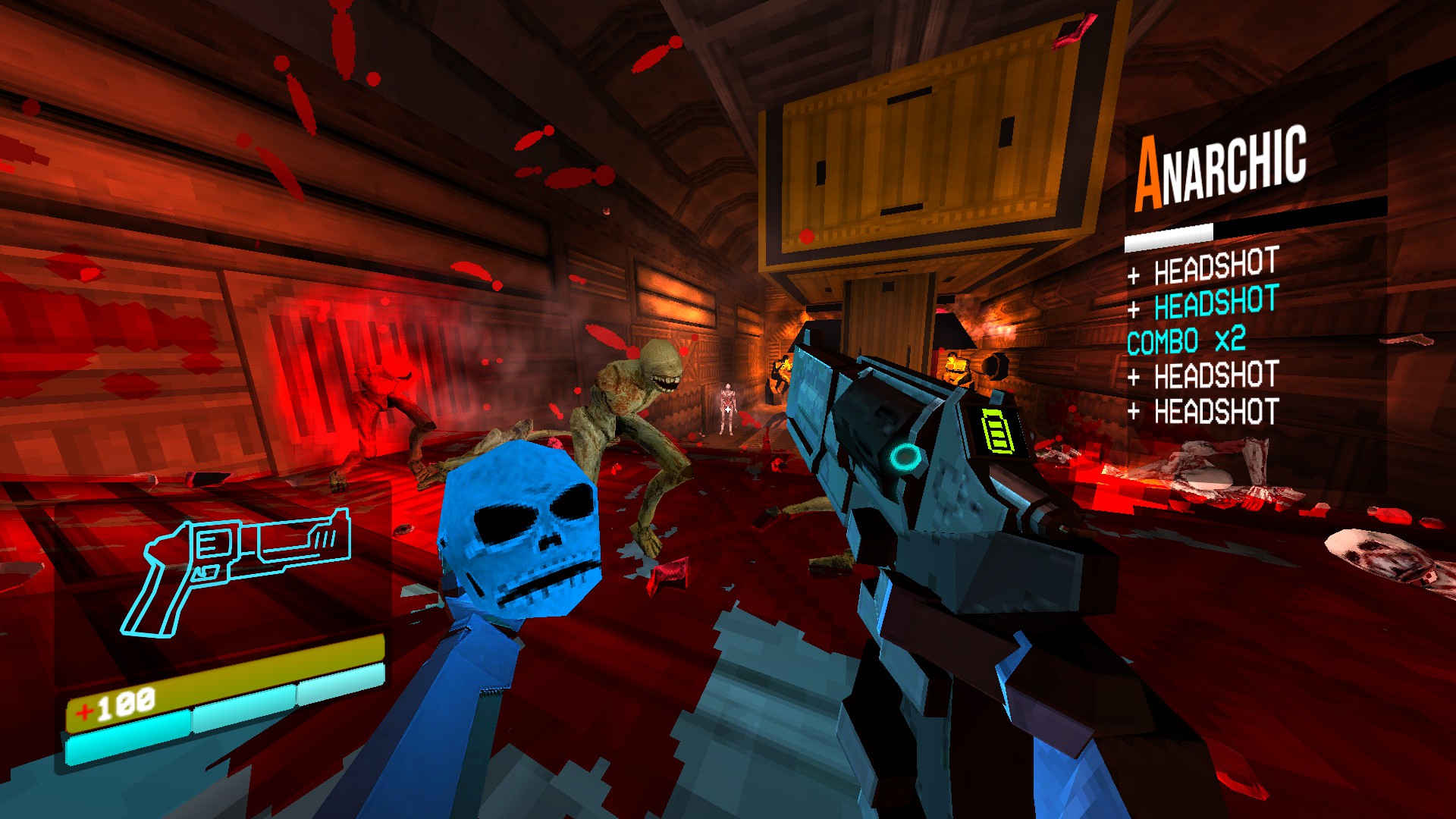 What is it? A Quake-ish retro FPS where sprays of demon blood heal you.
Who's it by? Arsi "Hakita" Patala
When is it out? Summer 2020

The retro shooter revival wave continues to splash chunky gibs over gamesland. Like Graham, I lose track of the many 90s inspired splatfest FPSeses we've seen over the last few years, despite having played a fair few. And most are actually pretty good. Ultrakill's headline gimmick is that dousing yourself in blood heals you, but that's neither as edgy as it sounds or entirely deserving of the word "gimmick".

It's a fast but manageable micro-horde management game in which you plough through a series of small set piece rooms. Fleshy demonic things beam in and run at you, biting, or sit back and launch fireballs from afar. You must punch them, shoot them, leap over and slam into them from above, blast the glass floor out from under them so they fall into a big grinder, or punch their projectiles back at them. Ammo is unlimited and the only health is blood, which is why that system works. It keeps the pace up, it rewards you for getting stuck in up close and finding a flow rather than sitting back and nerdlingering everything with long range headshots. The demo shows off five weapons, each with alternative fire modes. One revolver flings a coin into the air, and if you shoot the coin it pings off into an enemy for a critical hit. One shotgun can be pumped up to boost damage at the expense of accuracy, again encouraging point blank hit and run attacks. You get more points for varying your attacks and weapons, which will let you buy more guns, although that's not much of a factor in the demo.

It soon gets out of its brown corridors too, as you fight in pretty outdoorsy arenas, and even its music leans towards a more rhythmic drum 'n'/or bass than the exhausting generi-metal most of its peers go for.

You can watch our Colm be quite bad at it on our YouTube channel. Taunt him, friends. Do not acknowledge that the mouse sensitivity was clearly far too high.

Get the free Ultrakill demo here. 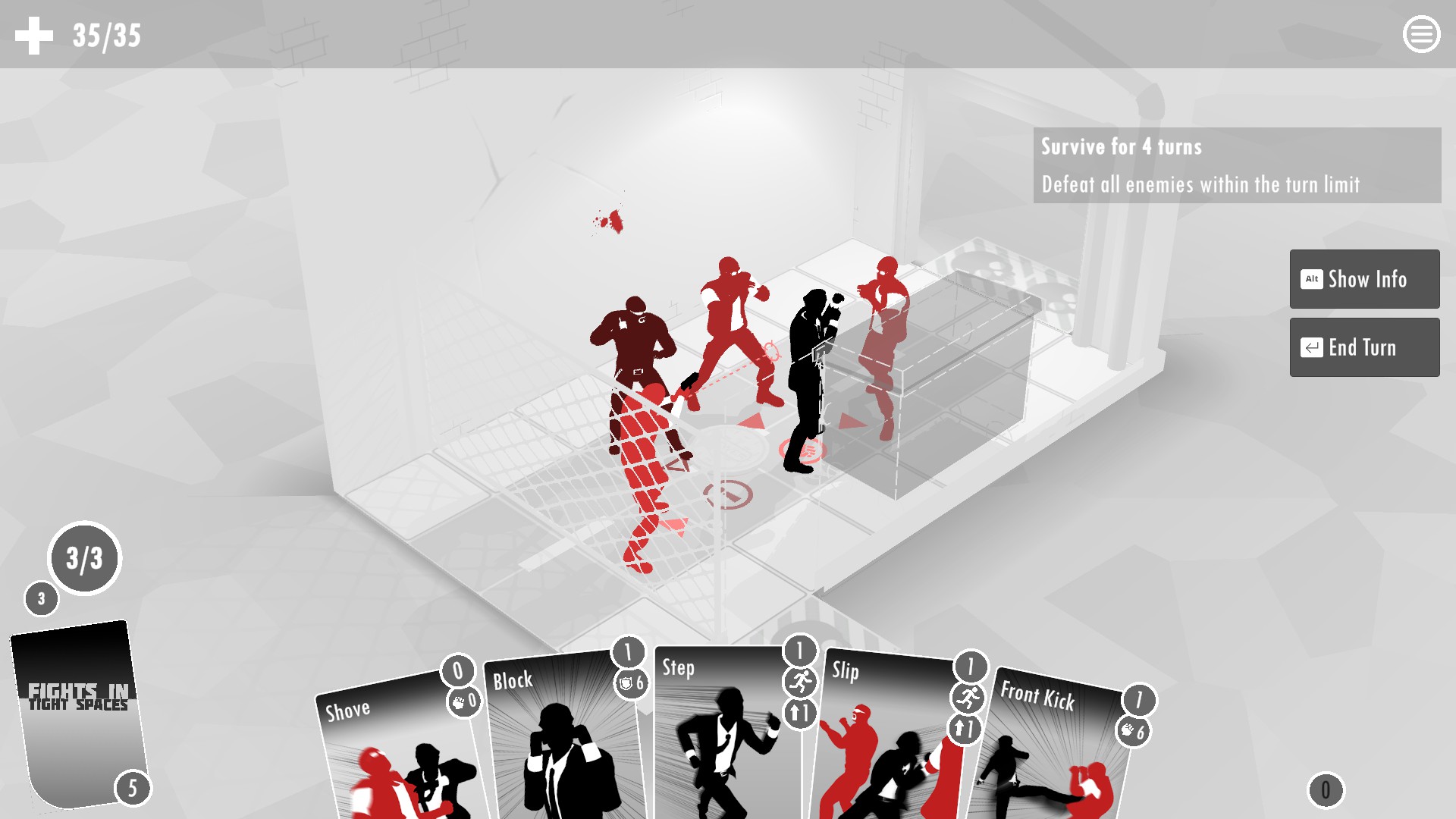 What is it? A deckbuilding tactical brawler.
Who's it by? Ground Shatter
When is it out? 2020

The phrase "deckbuilding roguelike" is both barrels aimed directly at my potential interest in a game. But wait! I've stepped to the left, grabbed another assailant and shoved him in the path of the attack. Next I'll use a movement card to slip past a third attacker and smash his head against a table. I'm out of cards but that's fine, because there's just the gunman left to deal with and I can probably kick him through the doorway, taking him out of the fight completely.

That's what Fights In Tight Spaces is about. It's too obviously comparable to John Wick to ignore, but it wisely doesn't go all in on copying everything about those films. Instead it's a somewhat experimental type of roguelike. You have a series of levels, some of which branch. Across each one you fight in a small room against a handful of punchy red men, who politely let you go first. The fools. They can only do one, maybe two things per turn, see, but you have a deck of cards that represent different movement and attacks, and you can play them all (usually. There's a resource, momentum, that sometimes runs out, but I never quite got to grips with that). Kick! That's done some damage, okay, now can I... yeah I can move around this guy and then shove him into the wall, then hopefully on my next turn I'll get a grab card so if this one with the pistol moves here I can move the third guy in the way and he'll get shot instead.

Every few levels you can heal up or pay (in-game cash) to acquire or upgrade your cards. It works because it's satisfying, basically. The animations and sound really sell the punching and staggering, and in particular the collapsing ragdoll of a critically bumkicked mook.

It is, however, at times frustrating. Never infuriatingly so, but the nature of the deckbuilder means that you'll sometimes get hands that mean you just can't do anything useful on a turn. Some of the movement rules and terms could be clarified a bit, and I'd like an option to continue a fight that I've won if there's still someone standing. But! That's exactly why we have demos, right? And in any case, this is a novel and fun little fighting game from the people who also brought us RICO, the slow-motion doorkicking FPS. They're getting a bit good at this.

Get the free Fights In Tight Spaces demo here.

What is it? An action adventure game based on Hindu and Balinese mythology.
Who's it by? Nodding Heads Games
When is it out? Q3 2020

One reason I'm so frustrated by the stock fantasy setting is that it's such a waste of the thousands of years and entire literal world of historical and cultural sources we have access to now. So it's a bonus that Raji's setting is one that doesn't get much of a showing in games.

It's a bonus because Raji is already a gorgeous game. Raji is chosen by the gods (principally Durga, the goddess of fucking shit up) to fight off the invasion of demons that took her brother. A circus acrobat, she readily runs and climbs and leaps about a somewhat ruined and corrupted world, brandishing Shiva's trishula when big chunky demons show up. You get quite an array of attacks, and the fighting is less frantic and mashy than usual. The slight delays between attacks mean that you have to aim and time things right, which takes a bit more practice than I was expecting. Use of a controller is pretty highly recommended for this reason, as it makes aiming a lot smoother.

Some attacks take advantage of pillars or walls, or require that you absorb dangerous magic from shrines first. The environments you're climbing and doing leaping, spinning area attacks with really caught my eye, too, as the distant camera really makes the architecture stand out, particularly the towering statues. I like the puppetry used for the cut scenes too.

Get the free Raji: An Ancient Epic demo here. 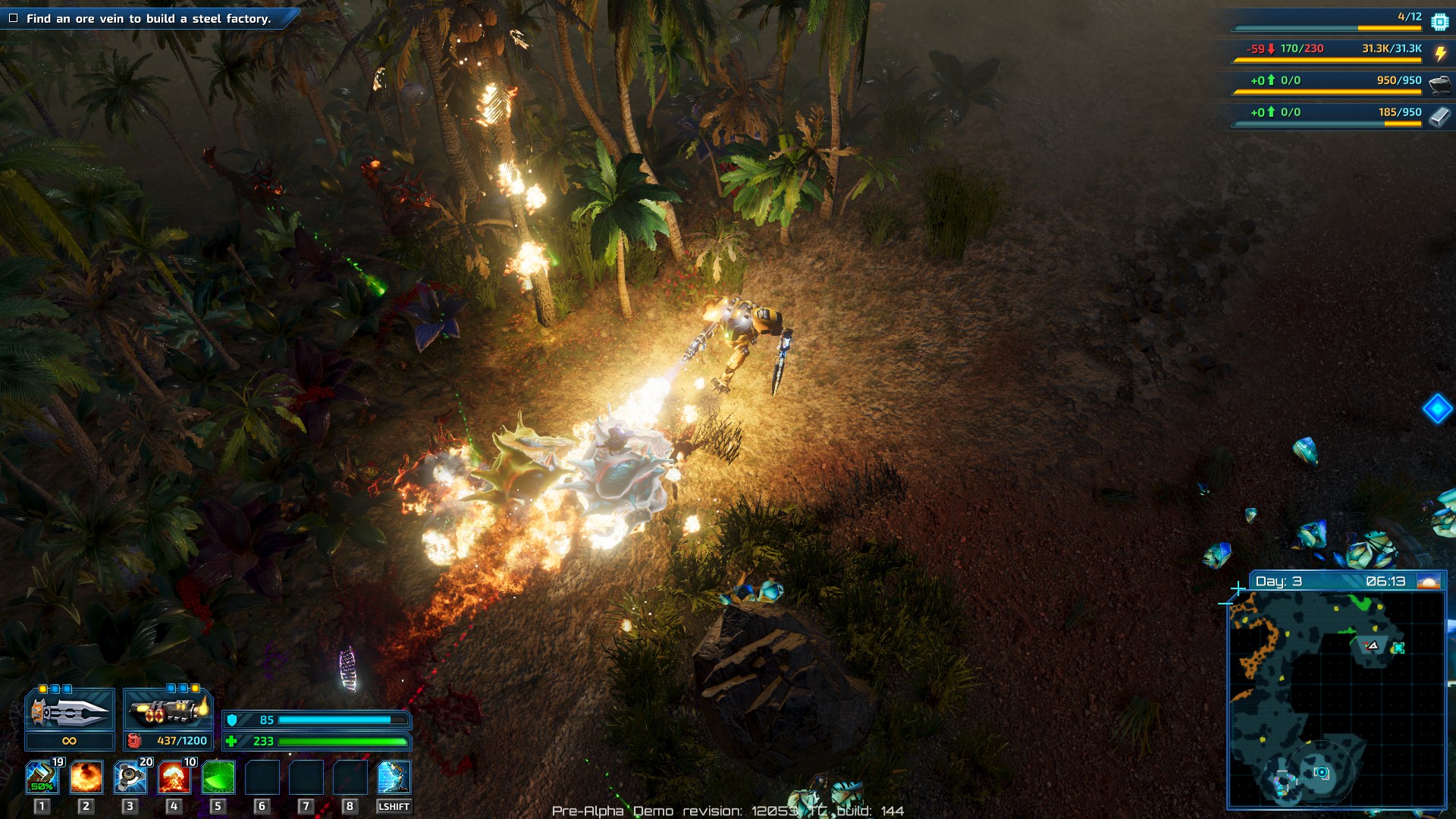 What is it? A top down action RTS about colonising an alien planet.
Who's it by? EXOR Studios
When is it out? 2020

I struggle with the traditional base building RTS, and with tower defence games. It's mostly a pacing issue, I think, and that's key to why The Riftbreaker does it for me. It's a hybrid of several subgenres in which you pilot a customisable mech around a thriving alien world (although the demo is a simulation), mining ores and zapping up bases to power them and convert them into weapons and defences against the swarms of mostyl hostile spacebeasts.

As you gather and explore, you'll fight increasingly huge and angry herds of aliens, but you should have the resources by now to manufacture more weapons and ammo, and research better modules to put in them. It's very proactive. There are periodic waves of attacks that your turrets can partly fend off, but you're free to roam a lot, and that will mean cutting down aliens with some fantastic weapons. Each arm can fit up to three, and fire independently and simultaneously. Your big laser sword is solid, but there are also chainguns, grenade launchers, lasers and flamethrowers, each of which can be modified to grant bonuses to accuracy, ammo efficiency, damage over time, splash damage, and so on. Yes, you can blast at a crowd with a hefty laser beam while simultaneously spewing fire. And you can drop mines, and detonate massive explosions, and cut down entire forests full of lush plants and animals, some of whom actively flee from you, just to hoover up precious resources to feed your ever-growing network of bases, and growing bloodlust.

You are definitely the baddies. Although there's a story thing going on too, so who knows, maybe the campaign will have you realise the destruction you're laying on the place. But it just feels good to wade into everything. It's visually busy but looks far better in motion than screenshots suggest, especially when you're cutting down foliage with your sword, or wading into a crowd just to set off a bomb and watch 30 of your attackers pop at once.

And you can teleport for free anywhere you build a teleport thing, so the tower defence stuff doesn't constrict much. It's good stuff.

Get the free The Riftbreaker demo here. 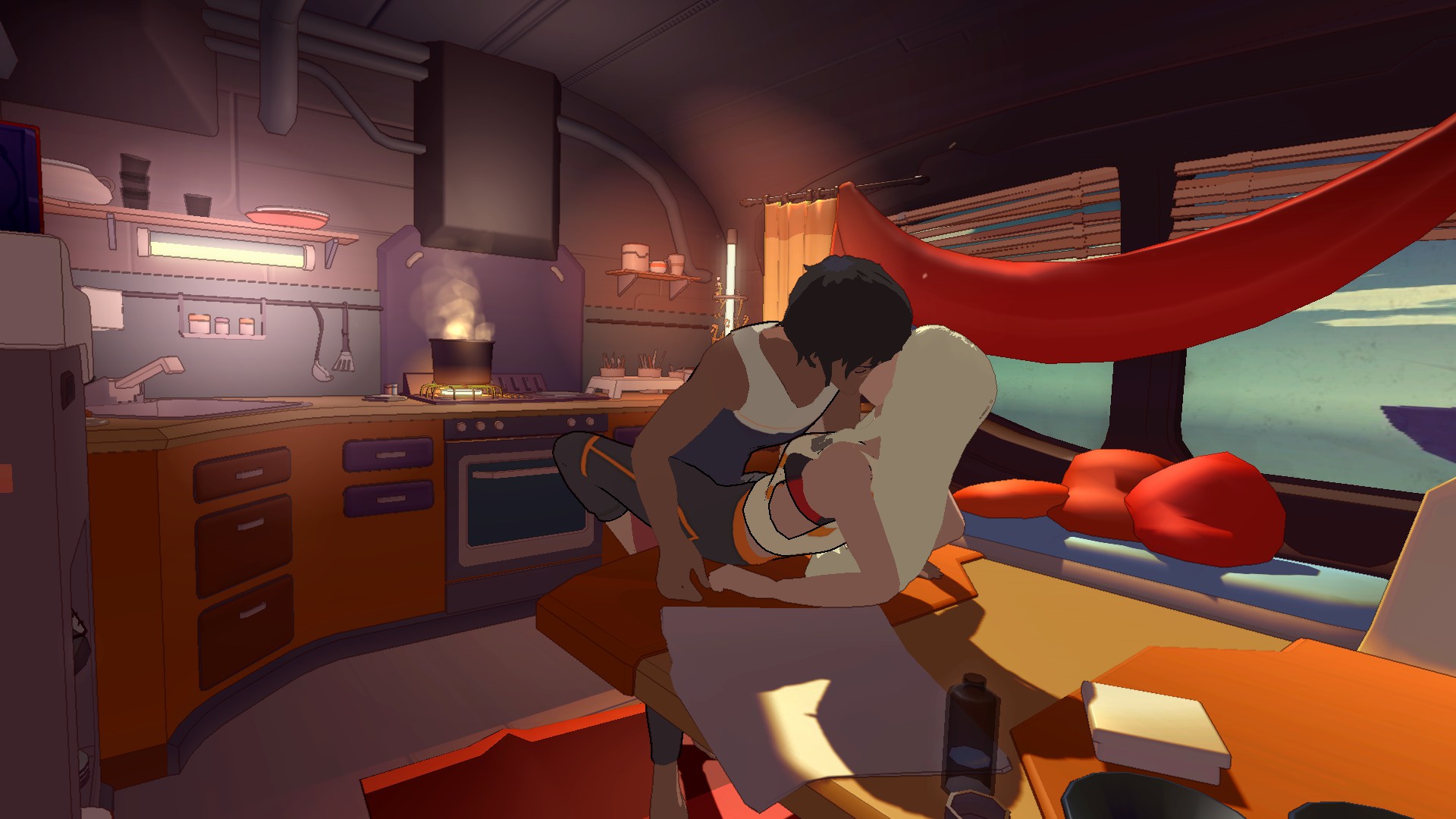 What is it? A very light, romantic RPG about exploring and gliding round a floaty alien world.
Who's it by? The Game Bakers
When is it out? 2020

I'll be honest: I'd hoped it would be gayer. But I suppose a few straight people play games too, so we should let them have one. I'll be honest again: lovely as Haven's art is, it's outshone by its own trailer. Just look at that animation. And the interaction with the music? Several chefs doing unspeakable things.

Haven is a about a couple, Yu and Kay, stranded on a strange, floatily archipelagorical world. They're hiding from a sinister terraforming organisation whose potential arrival offers Yu the dialogue options of "at worst I kill them" or "at worst I kill myself".

It's a pretty, if slightly stark world, and the way you glide about together gathering fruits and vegetables and marvelling at its alien creatures makes for a serene, upbeat time. You seek out 'threads', little glowing things that generate a track for you to skate along, which generates energy somehow. These threads are also key to travelling to new lands that quickly open up when you're cut off from your ship, and it's here where things get faintly ominous. You'll start seeing strange corruption around the place, and more hostile animals to deal with in simple fights, where co-ordinating your attacks is key. Your goal is to pacify, not to kill, which is a nice touch.

I kinda like Yu and Kay. They're a convincing couple, a little bit cute, a little bit sexy, a little bit grumpy and argumentative with each other in their visual novel style conversations when they're resting and hanging out at home. But something tells me there's a vein of darkness to the plot, and I'm curious to see where it'll go.

Get the free Haven demo here.

If you're looking for RTS or city builders, action games, strategy games or management games, check out our other best of the Game Fest lists here.