Few games nail the ebb and flow of conversations like Oxenfree, the supernatural drama about a group of teenagers on a deserted island. The cast speak over one another, cut their friends off mid-sentence and leave realistic gaps of silence that stretch on awkwardly until somebody says “so...”, and moves on.

You’re an active part of that system. You select speech bubbles that pop out of Alex, the protagonist, and if you choose one while another character is talking then you’ll butt in. If they have something important to say then the game won’t let you interrupt, so you don’t miss anything crucial.

The game also makes interrupting feel more natural by adding empty sentences that don’t really mean anything, and that you’ll feel comfortable cutting short. A character might say something poignant and then add “But, you know, it’s something, like”, which is your cue to click away. Those kind of sentences – the kind that we use all the time in everyday speech but are ultimately redundant – are a big part of what makes Oxenfree’s characters believable. 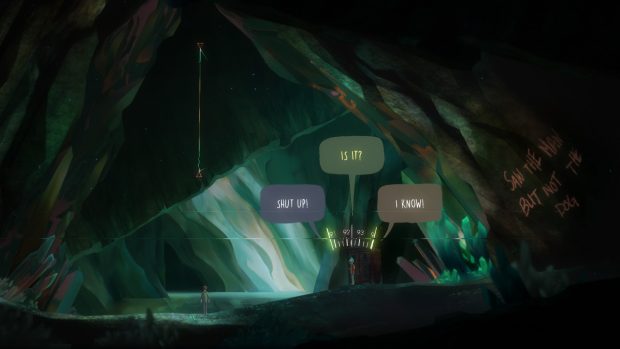 It also means you can choose not to speak if you want to, and the other characters will react to that. While I’m walking through a creepy forest with Jonas, Alex’s step-brother, he starts speaking about the direction we’re walking in. I stay silent despite the pop-ups. “We do know where we’re going, right?” he asks, to which I again say nothing. He sighs, defeated. “Great”.

Through these systems you can control the pace of conversations. If you want to listen to what a character has to say, you can let them speak before responding. If you feel strongly about something, you can interject. And if it feels more natural, you can stay silent. It’s all well-written, but the excellent dialogue system means that it’s not really what the characters say that makes them come alive, but when they say it.