It took me a couple dozen attempts to escape hell in Supergiant Games’ early access roguelite Hades. Once I succeeded I thought I might give it a break; return when there were new updates. But it absolutely has its claws in me, which is how I found out that mucking about and losing is actually way better than trying to win.

I know, theoretically, that life and Hades are both about the journey, not the destination. But I’m impatient and have places to be. (This is maybe why I relate so much to protagonist Zagreus.) So my early runs were narrow things, focusing only on the weapons and upgrades that I could make work with my slapdash, didn’t-actually-bother-to-learn-the-basics playstyle. In other words I was an absolute stuck-in-the-mud sword devotee, basically refusing to avoid attacks and trying to hoover up as much extra health as possible to luck my way through while waling on enemies from right underneath them.

But once that eventually worked (somehow), I was free to experiment with the huge variety of weapons, upgrades, and god-given extra abilities that Hades has on offer. And not just free, but practically compelled to by the game’s beautiful checklists inviting me to do everything at least once. Theoretically you get some kind of reward in one of the game’s many currencies when you finish one, though I don’t know what could be more rewarding than the inherent joy of striking things off a nice robust list one by one.

Focusing on those means choosing a lot of abilities that maybe aren’t actually the best for my build at any given moment. But that’s fine, because I’m not actually trying to win. It takes the stress out of it. But it also forced me to actually learn bits of the game I’d been studiously avoiding, like, say, dodging. Sure, I might not mind whether I get to the surface, but in one more room there might be that final blessing from Artemis that I just can’t seem to get lucky on the roll for. 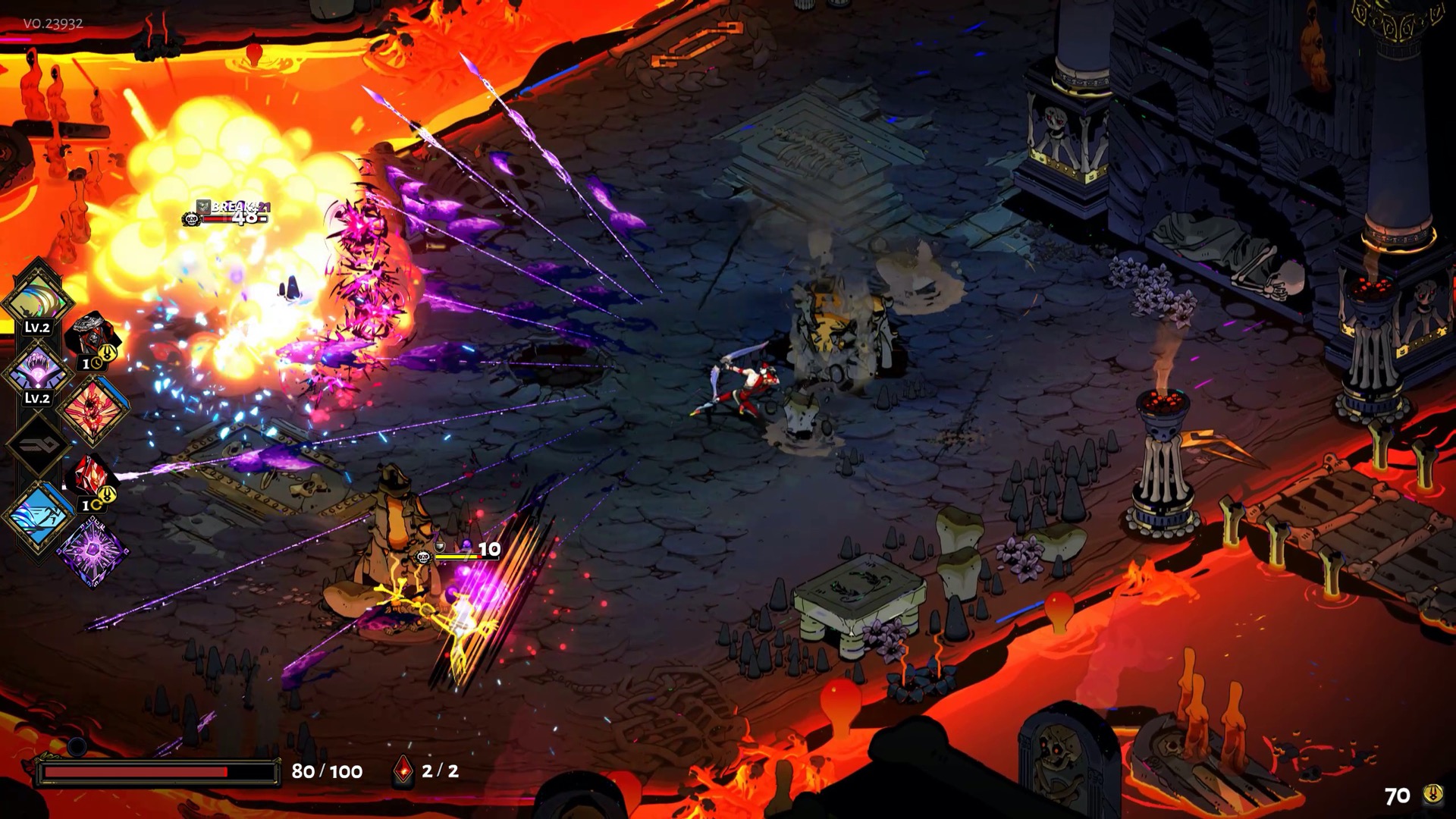 Of course, a lot of roguelites have the concept of the grinding run; gathering up whatever currency permanently improves your skill. I’ve practically maxed out Zagreus’s permanent abilities at this point. In fact, between that and actually learning the game, I’m getting good enough that I can make wonky builds work anyway. And yet, somehow, Zag keeps ending up back at home.

You might say this is the very nature of the roguelite, or it’s because I’m deliberately letting myself get killed, or even because when you do succeed the game doesn’t have a proper ending in it yet. But if you ask me, the reasoning is clear: the poor guy’s just conflicted on whether he wants to leave at all. 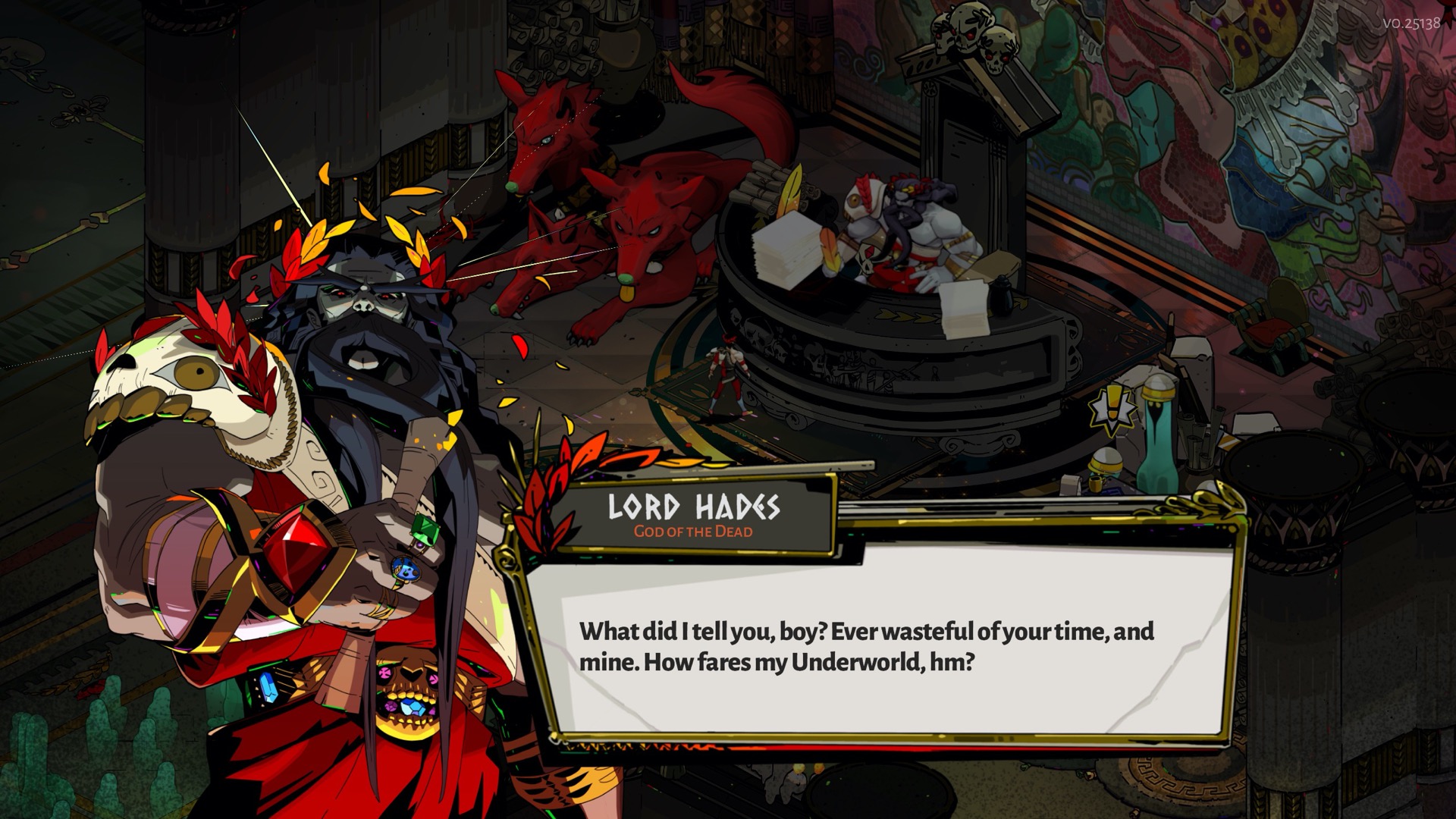 Hades’ characters are stellar, and Zagreus is leaving everyone he knows behind in his quest for the surface. It’s not hard to imagine him hesitating and getting hit because he’s busy thinking about never seeing the sweet cleaning gorgon Dusa again. Or because he doesn’t want to be separated from the very good dog Cerberus. And would it be so wrong to not try very hard this time so that he can give one more gift to his very charming crush, the god of death Thanatos?

So, sure, I could take everything I’ve learned and collected and truly beeline for freedom. But it wouldn’t hurt to lose a few more times first.