Obsidian Entertainment have a pretty great track record when it comes to singleplayer RPGs, and from what we've seen so far of The Outer Worlds, their latest project looks set to become another colourful feather in their cap. With the Xbox press conference of E3 2019 now past us, we've updated the below The Outer Worlds guide with all the latest information on the game's release date, details on combat and story, all The Outer Worlds trailers so far, and much more. 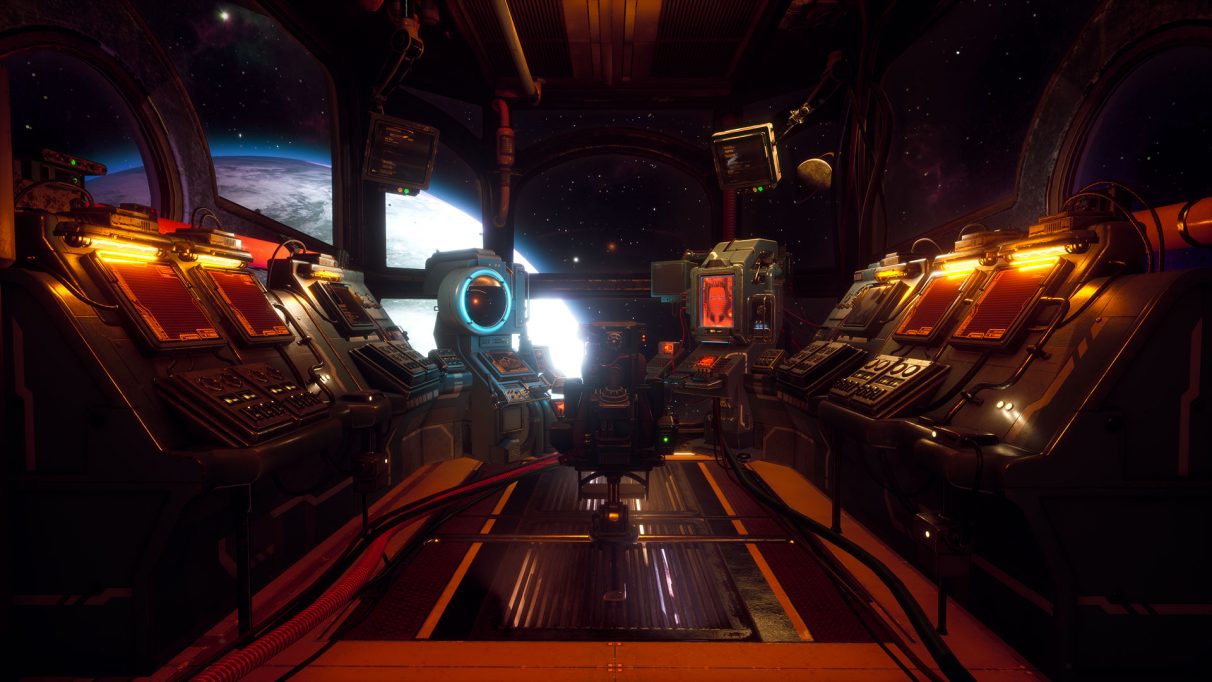 At E3 2019, Obsidian finally revealed that The Outer Worlds will be released on 25 October 2019 on Xbox, PS4, and the Epic Games Store, with arrival on Steam scheduled for a later date (most likely in 2020). Not long at all to wait for the latest RPG by this titan of RPGs.

The Outer Worlds trailer details - all trailers and videos

Below you can find a multitude of videos and trailers, starting with the latest E3 2019 trailer for The Outer Worlds, and working back through the 15-minute gameplay demo with GameInformer from December, and the original announcement video from Obsidian earlier in 2018.

The premise of The Outer Worlds is that you were one of many cryo-sleepy colonists shipped off to the - ahem - outer worlds of known space, where a corporation-dominated dual-planet colony called Halcyon was supposedly waiting to receive you. But your ship was lost in transit, with the result that you remained a human popsicle for a lot longer than is strictly healthy. Unfrozen at last, you set off on your journey across Halcyon and its two associated celestial bodies - in the words of the latest trailer, with a view to "challenging the corporate board" and "digging up their secrets".

According to Tim Cain and Leonard Boyarsky, the game's directors, one of the colony's two planets has been terraformed but the other has not, which means there is likely to be a whole host of hungry beasties and other dangers on that world. To travel between the two planets you'll need to find and regain control of your ship, which is where The Outer Worlds starts sounding very familiar to Mass Effect fans, with the ship serving as your home base and rest area where you can get to know your crew and companions, and take stock of your objectives.

There are companions in The Outer Worlds? And conversations?

The Outer Worlds will indeed feature living breathing companions with unique motives, quests, and attitudes towards life, Halcyon, and you. And you can have in-depth role-playing conversations with them to figure all this stuff out using a dialogue system similar to Obsidian's isometric titles such as Pillars of Eternity and Tyranny. The protagonist appears to be unvoiced, but you can choose between a variety of options for not just what you say but how you say it ("Dumb" responses are sure to bring hilarity to such encounters).

Your companions will also have things to say about the actions you take during your journey across Halcyon. If you deviate from their goals, they will be critical; and if you cross their line, they'll abandon you and head back to the ship. 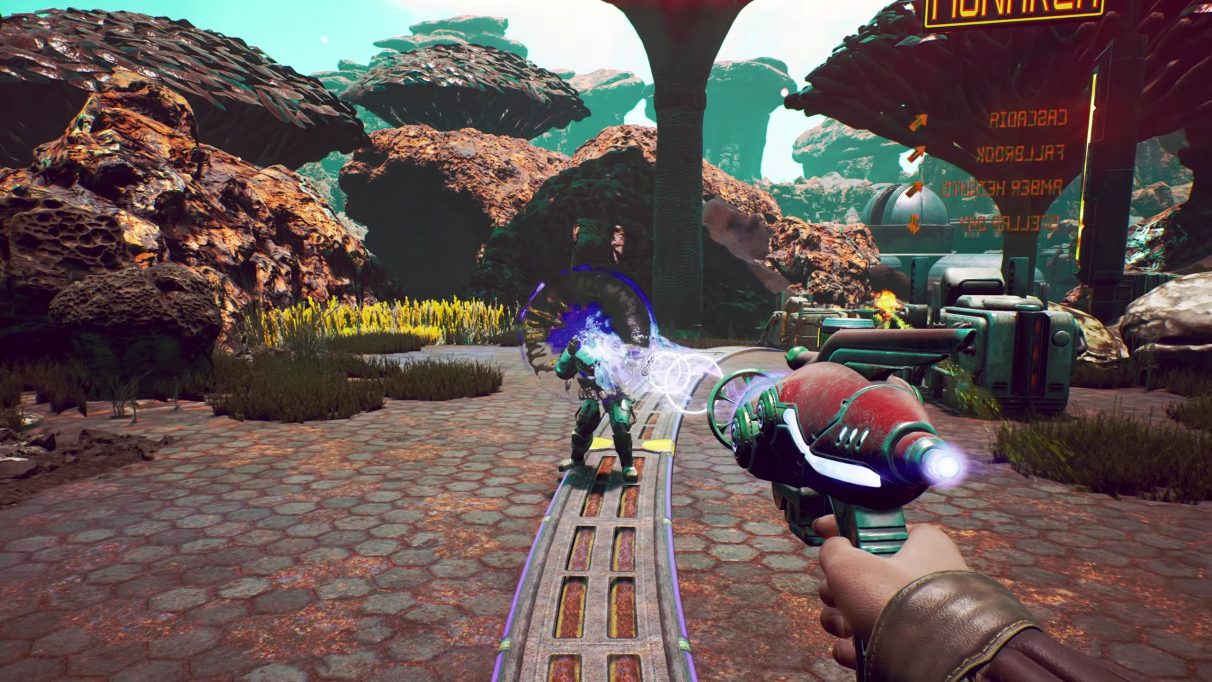 Combat in The Outer Worlds

It looks as though The Outer Worlds' combat will appeal particularly to those of us who had a jolly time killing things in BioShock. One of the new features the Obsidian folks were keen to show off was the "time dilation" mechanic, which slows everything to a bassy crawl giving you time to line up that perfect headshot. We're promised a diverse array of weapons with which to dispense your own personal brand of justice, including a selection of fabulously lightsaber-esque melee energy weapons for when gunplay doesn't get you close enough to the action. There's even a class of aptly named "science weapons" which include hilarious-sounding options such as shrink rays.

As with BioShock, drugs will play an important part in The Outer Worlds, both the driving force behind certain missions across Halcyon and also a viable option during combat to help you survive longer or dish out more damage. The leveling and stats system will help with that too, comprising six different skills such as strength and intelligence, and unlockable perks which activate as you pour more points into these skills.

An associated feature that Obsidian have implemented for this RPG is what they call the "Flaws" system. Flaws are neat little optional traits which are brought about by the game monitoring your experiences throughout Halcyon and noting if you have trouble with a particular enemy or thing. If this happens enough, you may be offered the option to give yourself a flaw based on this antagonist, which gives you a debuff during future similar experiences.

The game compensates you for this choice by allowing you to choose an extra character perk immediately. So if there's a certain type of beast over on Danger-Planet that you keep dying to, you are given the option to ingrain this shortcoming into your character's narrative in a way that the game understands. According to Cain, he's been wanting to put this system into a game for years. 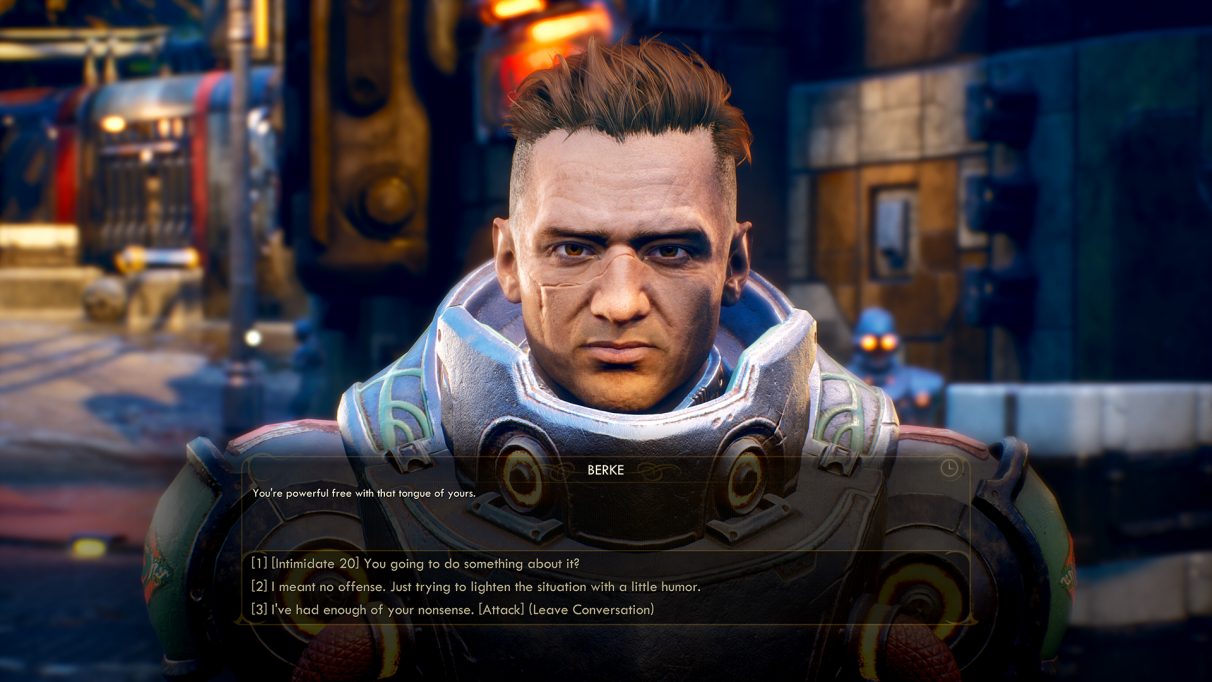 Player choice in The Outer Worlds

Many RPGs these days involve an element of player choice, where the world and its inhabitants react according to various choices made. The Outer Worlds doesn't look to be an exception, with multiple branching paths appearing in one of the very first quests in the game. The man who rescues you from your icy slumber asks you to procure certain chemicals which will enable him to help your fellow colonists.

Which you can do, if you choose. Or, you can take the objectively more fun alternative, and turn the poor fellow in to the bureaucops over on the Halcyon corporate board, for what Cain promises will be a "lot of money". Senior Narrative Designer Megan Starks has also revealed that you can kill pretty much anyone in the game, including your own potential companions or individuals critical to certain quests.

So there'll evidently be a fair amount of scope for larger branching paths during quests, in addition to the large number of branching dialogue options and the general open-world-ness of the game which will enable you to choose which location or quest you'd like to seek out next.

Will there be romance options?

Alas, though Cain and Boyarsky said they considered the prospect of Bioware-esque love- and lust-fuelled chapters of your colonist's journey, they ultimately decided against it. So for those of you hoping to woo that outlaw, you know, the one with the eyes, or that corporate clone with that distinctive waddle - I'm afraid you're outta luck.

For now, that's all we've got. But as more news arrives we'll be updating this page to reflect all the juicy details of Obsidian's new offering. So make sure you keep checking back here as we soar ever nearer to The Outer Worlds and all that awaits us there.