This advent calendar doesn't function on its own, you know. There are a bunch of us in here cranking levers, jumping up and down on switches, hurriedly shovelling words into furnaces. All so you can open day 11 and find out what's inside...

Katharine: When I arrived at university in the mid 00s, phone photo filters were just starting to become a thing. The newest and most popular was one that rendered an entire picture in black and white, save for a few things highlighted in red. If your phone was really fancy, you could even choose which bits to turn red, too. A cool trick, I thought at the time, if only because my measly Nokia 3210 could barely make and receive calls and texts, let alone take actual photos. Then everyone started doing it to every photo they ever took. It got boring real fast, and I was quietly glad when it finally became uncool about two months later.

Fortunately, FAR: Lone Sails has resurrected that idea with timeless style. With its moody, grey landscapes punctuated by the bright, auburn nose of its tremendous car-boat-train contraption and the hooded coat of its tiny wanderer man, this is one of the most achingly bleak yet beautiful games I've played all year - and a heck of a strong debut from Swiss developers Okomotive, too. 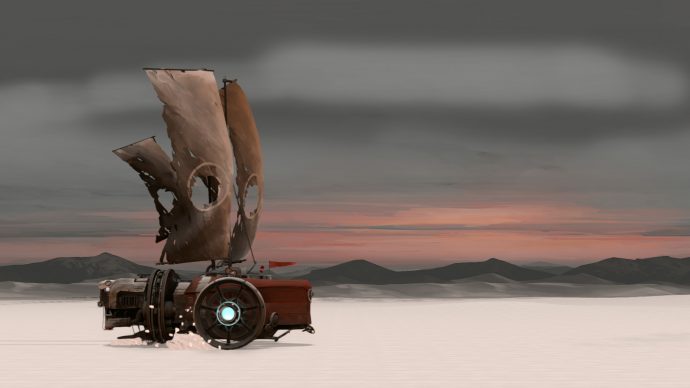 The star of the game is your giant land boat, which you lovingly tend to and care for as you whisk your way across a damaged and war-torn stretch of countryside. It's a huge great thing, taking up almost half the screen when you're pumping its valves and pushing switches inside it, and its cavernous innards make you feel small and powerless as you scurry across each of its three floors in order to keep everything moving.

However, when you switch over to using its titular sails for a spell and the camera pulls back even further, you realise just how insignificant your thumb-sized speck of a human really is in this monstrous, industrial landscape. This is a world where powerful machinery rules the roost; humans are merely there to keep the lights on and hide inside.

Despite the game's cold, hard exterior, though, there is so much life to be found right on your doorstep. Your land boat is a wonderfully tactile and dynamic breed of vessel. As you strain to lock its power switch into place, carefully making sure to expel any excess steam building up that might inadvertently cause a fire, you can really feel the heft and might of this grey-red beast start whirring to life as its gears and cogs groan and splutter in the engine. It's a wondrous bit of design, aided in no small part by its clever soundtrack, and it helps to make this hulking collection of nuts and bolts feel alive and homely.

You start getting so attached to it, in fact, that every knock, graze and bump fills you with dread, like it's some kind of colossal robot toddler that has no control over its own limbs. This sense of parental responsibility is further reinforced by the fact you've got to constantly keep feeding its bright blue core with barrels of fuel or whatever bits of trash you can scavenge from outside, too, as you can only coast on its sails when the wind's strong enough. In the moment, it's not unlike the frantic plate-spinning of Lovers in a Dangerous Spacetime, but here the game's sense of urgency comes not from the constant threat of total and utter destruction, but from the need to keep this mecha-baby alive so you can see what's left of the world around you. After all, it's only you keeping it all together here, and without careful management everything - you, your ship, your journey ever eastward - will coming to a slow, grinding halt.

FAR isn't simply about poking and prodding a bunch of levers and switches, though. It's also brilliantly paced, regularly making you venture beyond the walls of your makeshift stronghold to investigate the battered and broken world around you. Sometimes it's simply to clear an obstacle blocking your path, other times it's booting up other old machines to give your boat a new lease of life - and the more meticulous among you will almost always be rewarded with signs of life from previous travellers if you take the time to look. Despite everything pointing to the contrary, there is plenty of life to be found in this forsaken desert, and you are the one who's slowly but surely rousing it from its slumber.

What lies at the end of your journey? That would be telling, but I can wholeheartedly say it is absolutely a trip worth taking. It's a game of quiet wonder with a warm and tender core, and I guarantee you'll never look at a car-boat-train the same way again.

Graham: Katharine has already wonderfully encapsulated FAR's strengths, but I wanted to add, in modern parlance, that this is the game I think the most people slept on in 2018. It's not my favourite game of the year, but the ratio of how much I like it versus how many people I see playing or talking about it is the most out of whack. And that's a real shame, because it's one of only a handful of games in this year's calendar that I'm confident anyone would get something out of. Heed what Katharine has written above and add it to your pile to catch up on over the Christmas break.