If you click on a link and make a purchase we may receive a small commission. Read our editorial policy.
Developer: Capcom
Publisher: Capcom

Video Matthew: Court is now in session. I think we’re legally obliged to cram in naff legal references when writing about the Ace Attorney series. There is a very good chance this RPS chat-o-verdict will end with some horrible ‘any objections?’ type thing. We shall see. I have gathered us - by which I mean, you, Katharine - to discuss Phoenix Wright: Ace Attorney Trilogy, an HD collection of the first three Ace Attorney games. We both played them to death (never convicted) on DS, and have been revisiting them on PC.

Video Matthew: Oh great, here we go. What is it?

Katharine: Err… Sorry, I forgot I don't need to shout into my Nintendo DS's microphone any more.

Video Matthew: Yes, for those who’ve somehow managed to miss the Ace Attorney series, this is Capcom’s lawyer-em-up which first appeared in the west on the DS in 2006. The game is mostly about courtroom battles and finding contradictions in witness testimony, which you signal with a great big bellow of “OBJECTION!” On DS you could shout it into the mic (if you were a maniac), but it’s a much more reserved key-tap on PC. Katharine, you trained as a lawyer, how accurate is Ace Attorney’s depiction of the craft?

Katharine: If real life lawyering was as fun as Ace Attorney lawyering, I'd still be desperately trying to be a lawyer. There's no 'collecting evidence at the scene of the crime' in real life - that's left to the police and the people you're working with. But that's part of the joy of Ace Attorney - getting up in Detective Gumshoe's grill and seeking out key bits of evidence he missed or overlooked. You get the thrill of being a detective and a cool lawyer defending the innocent from incompetent and corrupt prosecutors. 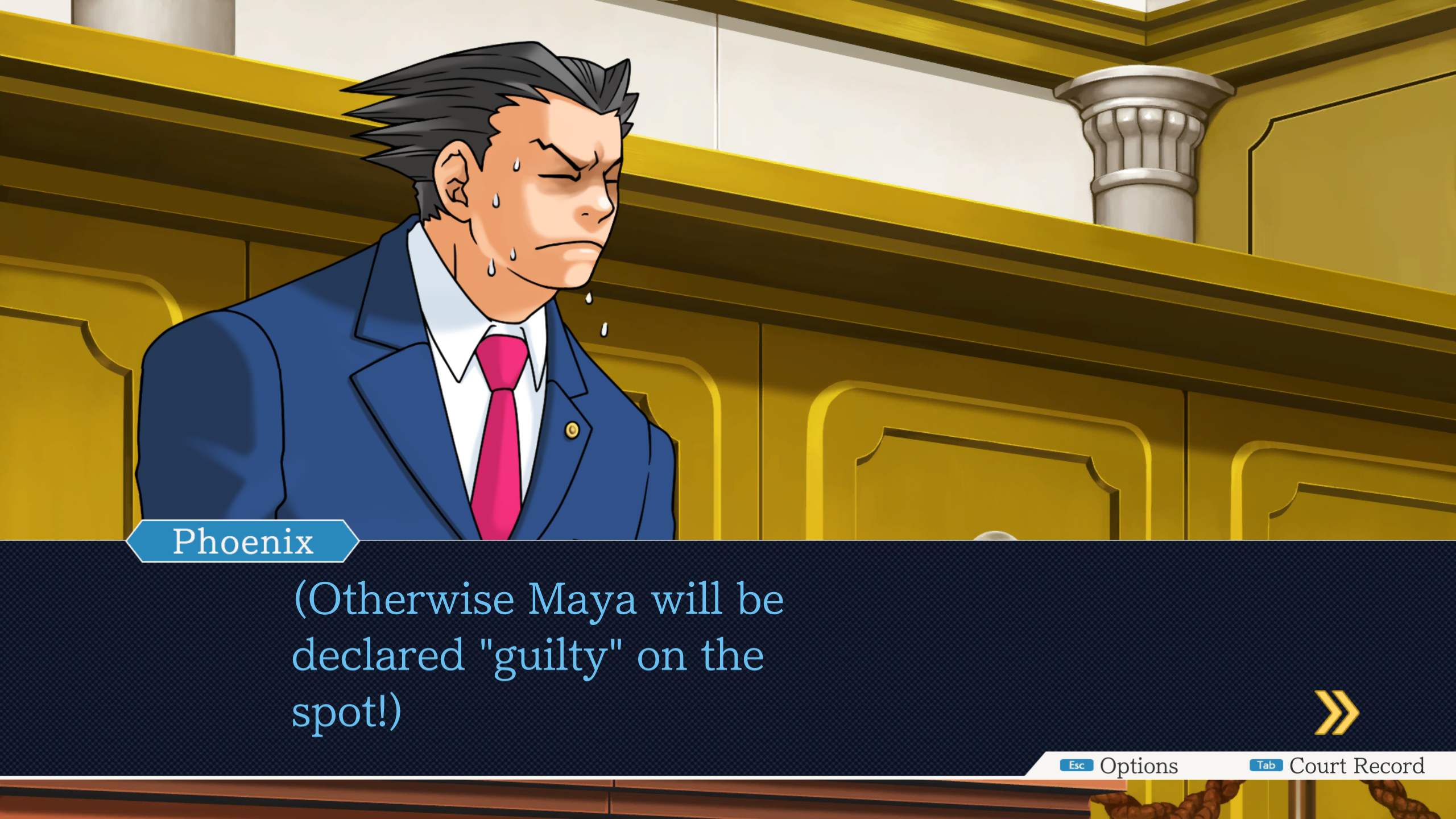 Video Matthew: Despite being one of my all-time favourite series, I’ve never really been into the investigation portion. It’s exposition central: mooching around crime scenes, meeting all the players for the upcoming case and doing little in the way of shouting. The second part of the trilogy, Justice For All, gives Wright a mystic doodad that reveals psychological blockages in other characters, meaning you have to present evidence or ask the right question to move these exploratory conversations forward. It adds a bit of spice, but doesn’t mask the fact that investigations are the verrrrry sloooooow lead-up to the main event.

Katharine: You're right. There's a lot of tapping and clicking on dialogue boxes, and going backwards and forwards between different locations as you gather evidence and speak to witnesses. These sections get a bit convoluted once cases grow in size and complexity -- in the third game, Trials And Tribulations, you're given an entire temple to explore at one point -- and it sometimes feels like you're going round in circles trying to find the next MacGuffin to move the story along. For the most part, though, I like the build-up they give you to the main courtroom cases, and by the time they're over, you're itching to exercise those vocal chords and point some fingers.

Video Matthew: One of the benefits of this port is a few more options to speed up the text. You can tap to skip to the end of a line or hold a button to fast forward through longer chunks. As the cases get knottier you do find yourself picking over conversations for missed clues, so this is appreciated. Of course, you’d be mad to haphazardly skip through, because the writing is brilliant.

Katharine: Correct. Creator and writer Shu Takumi is a master of mystery.

Video Matthew: But not so mysterious that I wasn’t able to stalk him around Comic-Con in 2010 and get a photo with him. 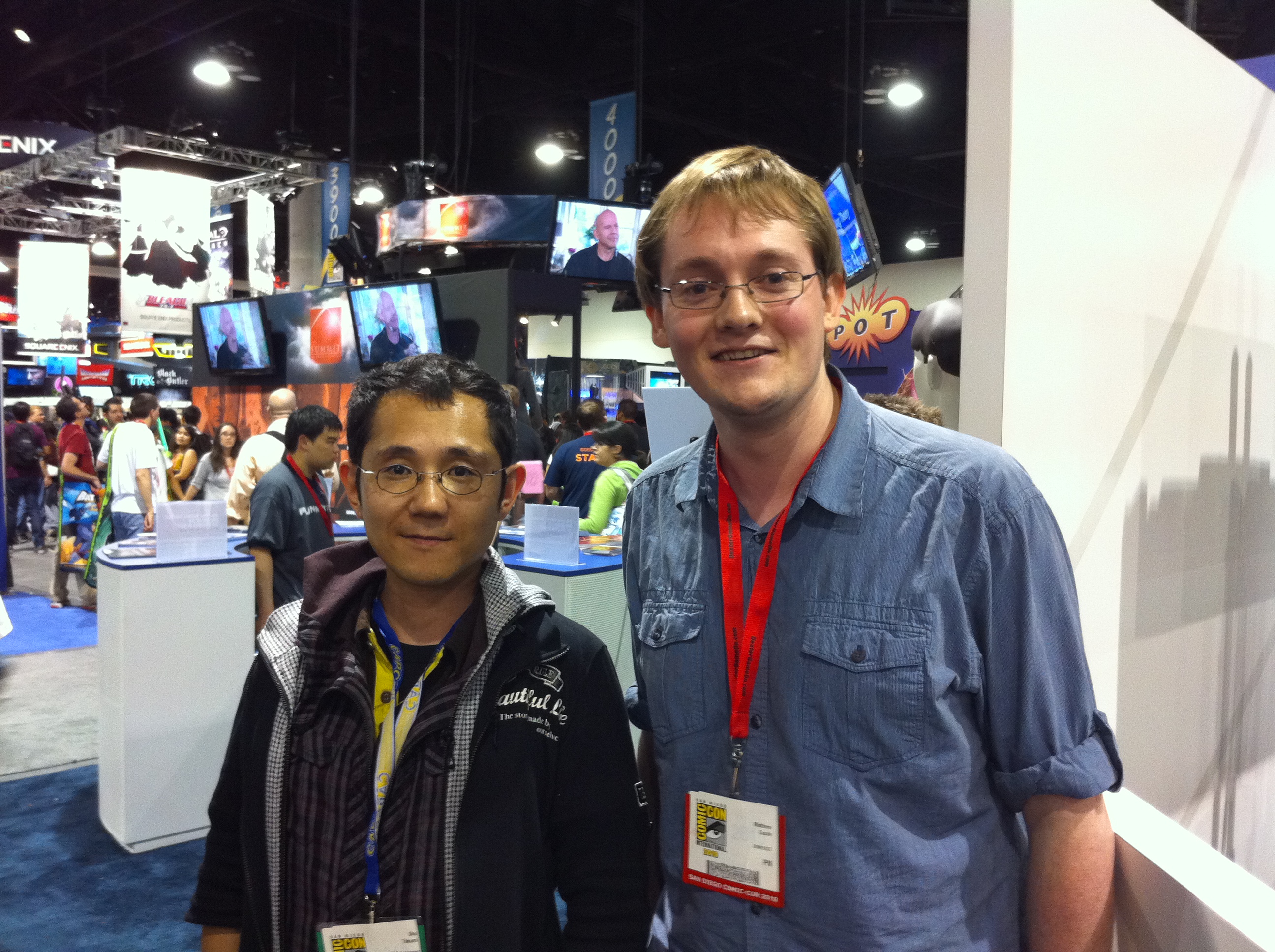 Katharine: You're lucky he didn't arrest you!

Video Matthew: He seemed quite bemused to be hijacked while perusing a manga stand. Side note: crikey, I was a skinny boy back then. I knew it was a mistake to eat Shu Takumi.

Katharine: Err… HOLD IT! We're getting off topic. We'll deal with your eating of Ace Attorney's creator later.

Video Matthew: One the strengths of Takumi’s writing is how fully realised the Ace Attorney universe is, something that particularly shines when you group the first three games together. There are story arcs that carry across the trilogy, sure, but it’s as much about the recurring characters, brands and in-jokes: the continued woes of Wright’s idiot pal Larry Butz; his repeated clashes with prosecutor Winston Payne (losing more of his hair with every failure); or the gradual fleshing out of the Steel Samurai mythos, a popular TV show cursed with a rocketing death toll. That last one is apt, as I’ve always thought of Ace Attorney as the greatest TV show never made. Now I think about it, it’s basically The Good Wife/Fight but with hair at right angles.

Katharine: Not to mention some spectacular puns. But it's also more forgiving when you make mistakes, isn't it? The original DS save system was as cold and harsh as Franziska von Karma's whip. Once the judge had enough of your blundering, it was right back to the start of that court session, which was absolute torture for some of the later, incredibly lengthy cases. Now you can save more easily and retry.

Video Matthew: It’s less frustrating in that regard. Still has problems as a nuts-and-bolts adventure game, though. The thrust of the courtroom scenes is about matching evidence to contradictory statements, but it’s sometimes easy to get ahead of the game and struggle to see the steps it wants you to take. It’s something the series has gotten much better at over the years (I’d love to see Capcom port Apollo Justice/Dual Destinies/Spirit of Justice in a similar trilogy), but it’s a flaw baked into the twists and turns of the original cases, so not something that can be remedied here. 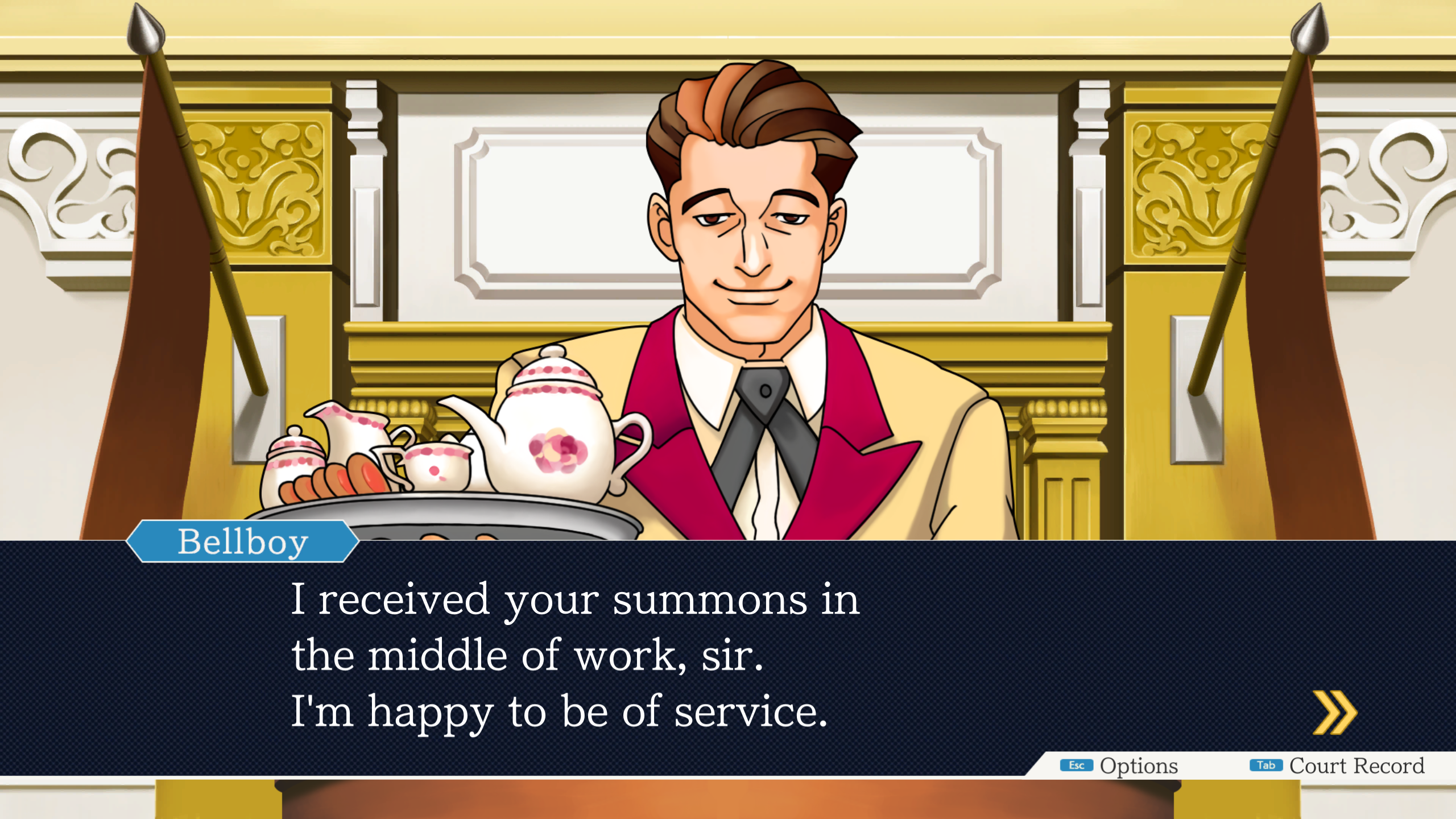 Katharine: And it’s a testament to Takumi’s writing that even with the smoking gun in plain sight you can still get wrapped up in the drama and panic of Wright’s flailing logic. Whenever I hear the 'Pursuit: Cornered' theme, my heart starts racing with excitement. It's the sound of pure, swift justice - even when you're cross-examining a parakeet, walkie-talkie, or a clown whose entire testimony consists of the lyrics from 'Fresh Prince of Bel Air'.

Video Matthew: You don’t get that in John Grisham. So come on, then, time for the most important bit: best game, best case, best prosecutor.

Katharine: Your honour, I submit the following to the jury: Trials And Tribulations for best game, mostly because it does such an excellent job at tying up all the loose ends to deliver a big story pay-out at the end of the game, but also because it has some absolutely cracking cases in its own right. Case in point (sorry): Recipe for Turnabout, where Phoenix Wright gets impersonated by the brilliantly conceived loan shark Furio Tigre. The by-now-very-bald Winston Payne finally gets his comeuppance and there are some great music tracks (not least Furio's own toe-tapping number).

As for best prosecutor, I'm going with Franziska von Karma, because that lady does not mess about. I didn't actually like her all that much in Justice For All. Her whip-cracking and constant shouting really started to grate on my nerves by the end, so it was a big relief when the coffee-drinking Godot and his cool, jazzy theme tune waltzed in at the beginning of Trials And Tribulations. However, it's that T&T pay-off that once again brings everything full circle with Franziska, and by the end of it she'd won me over, both with her more mature take on what it means to be a prosecutor, and how she finally ends up escaping from the shadow of her equally grating father, Manfred von Karma (who Phoenix does battle with in the first Ace Attorney game) who, for the record, will now and forever be a right old turd. 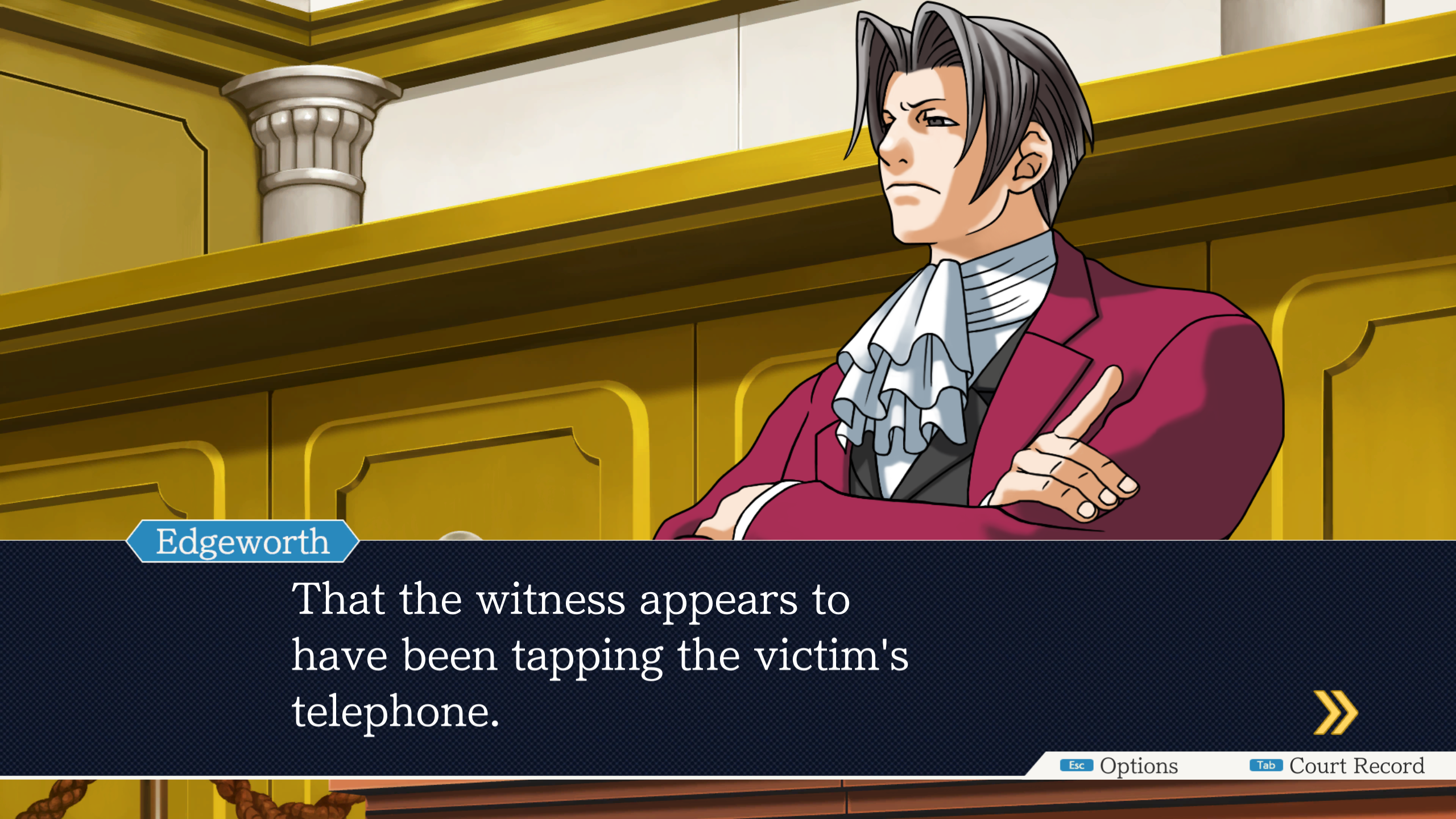 Video Matthew: Definitely with you on Trials And Tribulations, but it only works as a payoff to the others, so don’t skip to it. As for prosecutor, I would normally say I’m a Godot man, if only for his coffee-throwing animation, but replaying the games has reminded me how good a character Edgeworth is. For all the silliness of the trilogy, Takumi offers quite a sincere discussion about the purpose of and relationship between defence attorneys and prosecutors, and it’s most thoroughly explored with Wright and Edgeworth. Plus: I like his cravat. As for case? I’m a sucker for the time-jumping ‘prequel’ cases in T&T. Getting to play as Mia Fey against Edgeworth and his ‘unbroken’ record in Turnabout Beginnings is top fan service. A real gut punch of an ending, too.

Speaking of jumping around time - and this is a horrible segue worthy of Wright himself - what do you make of how the port drags the looks of 2006 into 2019? I’m pretty sure this is based on the 2012 HD remaster for iOS.

Katharine: I'm very much on board with the lovely HD artwork in this remaster, but I object to the use of that updated font. I'm charging it with the crime of assaulting my eyeballs.

Video Matthew: I don’t hate the font, but I wish the game had HD versions of the original sprites. Some of these look like DeviantArt sketches. To my eyes, the original sprite work placed the game alongside Capcom’s other arcade offerings. It’s the Street Fighter of lawyer games. Only instead of doing fireballs, people’s hair explodes when they get cross. Plus, chunky pixels would fit with the soundtrack, which is the same bleepy-bloopy (pardon the technical language) stuff we had on DS.

Katharine: Yes, it would have been nice to have a remastered soundtrack to accompany the glossier artwork.

Video Matthew: You got me the orchestral version of the soundtrack for my birthday and it’s an absolute banger. Here, listen to a bit of this:

Video Matthew: I am stirred, Katharine. STIRRED. Anyway… if someone had no prior experience of Ace Attorney, as many PC players likely don’t, who would you recommend it to?

Katharine: Anyone who's enjoyed things like A Case Of Distrust, Her Story, Return Of The Obra Dinn or even the wacky online haunts of Hypnospace Outlaw. All involve excellent detective work, but Ace Attorney adds that extra layer of tense, finger-wagging courtroom drama.

Video Matthew: I’d throw in Danganronpa, which is basically Ace Attorney, but a bit more hectic. Really, if you’re a fan of good stories and good characters - and have a spare 50 hours to work through three games of cases - this is a pretty good bet. Give it a go and maybe you’ll find yourself stalking Shu Takumi around a convention centre in the not too distant future. It’s the kind of game that does that to a person.