We're planning on a full review next week, but seeing as the weekend, and with it the tortured paralysis of what to play, looms so close, I thought I'd share some initial thoughts on the newly-released, Warhammer vs Left 4 Dead rat-splatting sequel Vermintide 2. In short: it's the same co-op survival formula, but now writ very, very large and very, very bloody.

The biggest change to this first-person co-op survival action boogaloo is that, where the first Vermintide could feel overly-murky and sometimes claustrophobic, the sequel often lifts the roof off. There's still no shortage of blood-red Skaven eyes glinting from dark corners, but there's also an awful lot of daylight, and with some spectacular backdrops, like these Misty Mountains-alike: 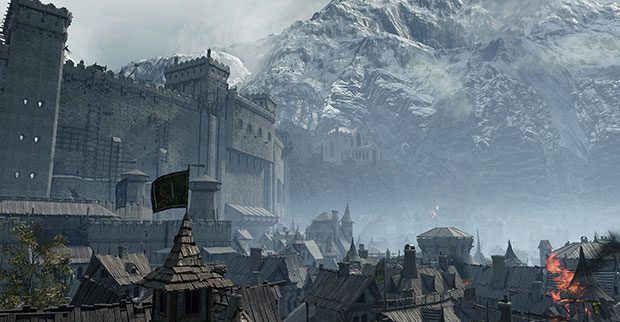 The actual space you get to run around in probably isn't any bigger than V1's, and there's still a vaguely irksome element of having to discern a very particular door or set of stairs from the mountains of viscera and gothic rubble in order to progress. Nonetheless, this sense of a vast world wrapped around you makes a surprising amount of difference.

The abandoned fortress-themed map I've spent most of my time in also evokes Dark Souls' architecture quite strongly, with its long rampart runs and oppressively towering walls. I've already suffered at least one death because I was too busy looking around admiringly. You definitely don't need to be a Warhammer gonk to appreciate it: it's simply some top-notch dark fantasy set-dressing in its own right.

The scale of battle also feels amplified, not least because we've now got Chaos in the mix as well as the Skaven, the ratman cover stars. This means there's simply more big guys on the field, a greater sense of visual threat as well as variety. I really noticed the sound design too, the furore of combat and the gruesome sounds of rending flesh. Vermintide II, despite its heavy debt to Left 4 Dead, is primarily a melee game, and the sequel amps up that sense of being walled-in by 'orrible beasts and having to physically carve yourself an escape route. It's gruesome to behold, but the sound really ramps up the ick factor. Good work, say I. 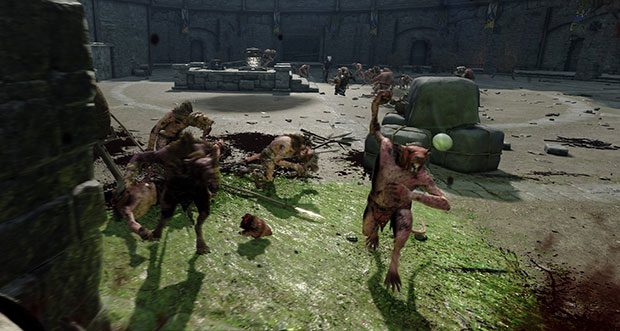 Where the sound doesn't work so well for me is the continued semi-story of Verminitide's various hero characters, who return to offer a steady but rather banal stream of toothless bickering and stiff-upper-lip arrogance.

Character depth has rarely been a hallmark of Warhammer's wild excess, of course, but the trouble here, as with the first game, is that sneaking suspicion that it thinks it's got the combined force of personality of Tom Baker and Brian Blessed. It's serviceable, and we're certainly not talking David Beckham bad here, but the necessary alchemy of writing and acting required to really pull off a game quite this character-led doesn't quite come to pass.

But clearly the true star of the show is the co-operative combat against remarkably relentless monstro-hordes, and I'm glad to say that Verminitide II feels very, very good in the hand in that regard. The distinct but complementary skill sets for each of the characters means it never feels like just four soldiers soldiering, and the intensity of some of the setpiece fights is such that you, as much as your character, will really feel the need for a moment to recover afterwards. 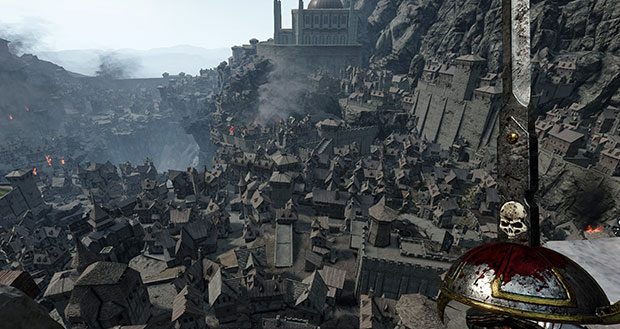 I do have some concerns about longevity, about how this is going to feel once I've gawped at every titanic sight and faced down every mega-monster, once going through the same doors and standing on the same pulley-powered elevators feels too familiar. There's a fairly fulsome reward system in there - presented, inevitably, as boxes full of mystery loot - designed to overcome that with a drip-drip-drip of new goodies, while levelling up gains you access to new versions of the characters with new abilities.

So yeah, I'll be back for more without a doubt, but I don't know if I'll still be saying that a fortnight from now. All being well, I'll give a better sense of that mid-way through next week.

Warhammer: Vermintide 2 is out now.