If you click on a link and make a purchase we may receive a small commission. Read our editorial policy.
Developer: Blue Manchu
Publisher: Humble

To be more specific, your forward momentum is provided by the game's crafting tree. You are a prisoner thawed and sent forth by a bureaucratic corporate nightmare - the voice of Stanley Parable's narrator is its avatar - to find the items needed to repair a monolithic spaceship. An ID card, a mouse ball, a water-based lubricant and more. These items are marked on your starmap one at a time, giving you a destination to aim towards. The next item you need will be six or eight or more jumps away however, and you'll only have fuel and food for three jumps. To continue your journey, you need to board derelicts along the way to gather more, and cram your pockets with as much other junk as you can find at the same time. 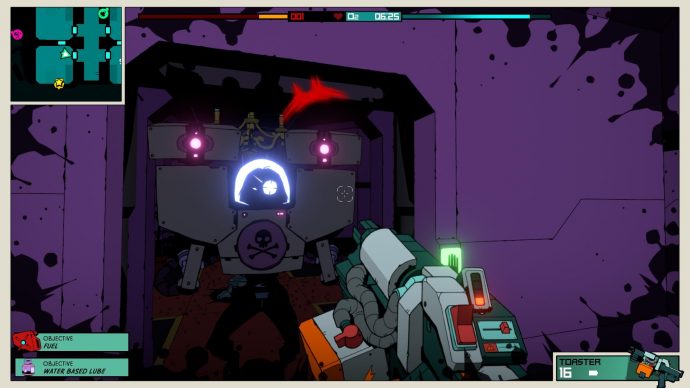 Once collected, this random junk then lets you craft items on the crafting tree at the click of a button. You start the game with just a pistol, but soon find enough scrap to create a stapler gun, which fires a wider spray like a flak cannon. Next I unlocked kittybots, which scurry around on the floor to distract any enemies nearby. Those enemies are all mutants of varying kinds: 'Patients', which are a screeching swarm of flying heads; 'Tourists', who scamper and explode when you get near; 'Screws', who are slow walking hulks with terrifyingly large healthbars, and more. (Those mutants mostly chatter at you with cheeky British slang and accents. I found it all pretty inoffensive and ignorable, though not actually funny.)

I was worried for the first hour or two that the tools I was unlocking were not much altering how I approached each spaceship. Then I realised that I could mouse over the empty nodes on the crafting tree to reveal what lay ahead, and discovered half a dozen powers I wanted. I wanted to be able to turn turrets and enemies into allies, I wanted to be able to warp enemies into a void and then summon them where they didn't want to be, I even wanted to take 50% less damage from fire, after having burnt a few characters to death already. These goals gave me motivation to board more ships - you can mark this junk on your starmap also, so you know where to go - and I spent a merry few evenings boarding, looting, and crafting. 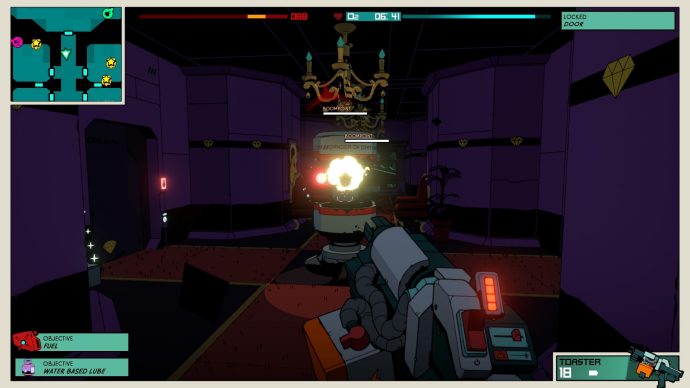 Those worries eventually returned, however. No matter what ship I boarded or what item I was there to retrieve, I fell into a steady strategy. After boarding, head directly to the helm to use the ship's computer to mark the locations of all loot on the map. Run away from Screws. Avoid turrets, and if that's not possible, run towards turrets and press the button on their side to flip them to my side. Shoot everything else. Press 'use' on anything that's green, and therefore lootable, till the map is clear. Leave.

For a strategy-shooter, I found very little reason to use any other strategy. The result is that the game's systems are interesting on paper, but their impact on you during play isn't always felt. For example, if the above pattern failed, and my character died, it hardly mattered: progress carries over to your next meatsack. I am ultimately grateful for this - true permadeath wouldn't suit the game - but choices like whether to flee ships before they're fully explored feel less meaningful when death is only a minor inconvenience.

The game perhaps attempts to make each life feel more precious by assigning your character one or two starting traits, which can be positive or negative. A positive might be that you run fast, or take less time to lock doors; a negative might be that you're clumsy and so have a percentage chance to drop ammo when reloading a weapon, or that you cough sporadically as you walk around. 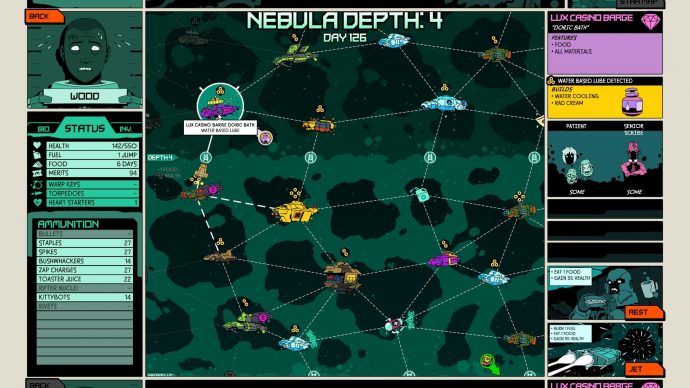 I love the sound of these! I am thrilled at the prospect that I might be sneaking around an enemy Screw only for an unstifled cough to alert it to my presence. But this never happened. Void Bastards isn't much of a stealth game and so you're rarely sneaking, and coughing never alerted anyone when I was. Likewise, ammo conservation or management was never important enough to me that dropping and having to pick up a magazine mattered in the way it does in a more deadly and nerve-wracking game like Receiver.

Once unlocked, each new tool felt similarly underwhelming. I played through all of BioShock by hacking every turret I could find, before springing a climactic trap on that level's wandering Big Daddy. In Void Bastards, the partly procedural levels never placed turrets in useful locations: they either sat with no enemies to shoot, or blew themselves up by firing at too close range. You can 'void' turrets into the ether and re-materialise them in more useful locations, or do the same with other enemies to place them in front of your friendly turret, but lobbing bombs, shooting at them lots, or running away is usually an equally successful and safer tactic. 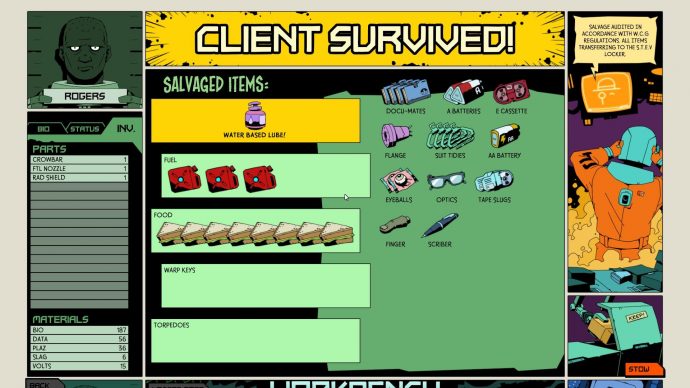 The game gives you advanced warning of what enemies to expect onboard a ship, so you can select your loadout accordingly, but it never created situations where I was required to out-think these enemies with creative applications of the tools at my disposal. I eventually came to think of the mutants not as AI entities, but as ambient hazards more akin to the station's slippery oil spills, radioactive puddles, and fires. They tend to stay confined in their rooms, wandering here and there until they spot you, and the ultimate weapon against them is locking the door so they can't get out. The closest I came to creative satisfaction felt more like cheesing it: there's a laser-weapon that can fire through glass, and there are frequently glass doors that can also be locked. Using a gun in Void Bastards always feels more like whittling down a healthbar than doing damage to flesh-and-metal, but doing it from the other side of a sheet of glass while the enemy looks dumbly on reduces any sensory satisfaction even further.

This all sounds extremely negative about a game I just said I had a merry few evenings with. I think that's because it's a game with two halves: the wrapper of starmaps and crafting trees and character traits which excites and entices me with its possibilities, and its shooter core that ultimately fails to manifest those systems in interesting ways amid the ship-boarding and mutant-fighting. 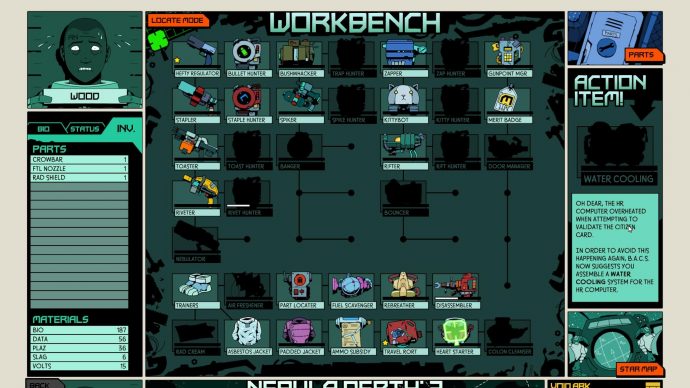 Yet I'm still confident I'll have a few more merry evenings with it, because what I said at the beginning is true: I am motivated. It has variety enough that I'm still discovering new ship types to board. The crafting perfectly paces progression through the different abilities. The starmap offers up occasional obstacles that offer a twist on the routine - black holes that hurl you to a random new position on the map, or pirates that follow you onboard the ship and attempt to hunt you down. Getting the 'tall' trait or the 'colorrblind' trait does not have much real impact on how I play, but it's still a cute novelty.

Void Bastards is ultimately not more than the sum of the parts I outlined 1400 words ago, but it's worth rummaging through all the same. Just like yer da said about the bins, when he finally found those Euros.

Disclosure: Cara Ellison, a former writer for RPS, was the writer for Void Bastards. I'm also pretty sure she voices one of the pirates, so if you ever wanted Cara to call you 'a dobber', then playing this is the best way to do it other than being in the RPS IRC room circa 2012.