I’m really excited about Void Bastards. I mean, it’s a new deeply systems-driven FPS made by some of the people behind System Shock 2, Neptune’s Pride and Captain Forever. Of course I’m excited. You play as a desperate crim boarding extremely hostile derelict spaceships to loot stuff. It’s got cool guns and a striking comic book art style, and it’s the result of some extremely qualified unfinished business. I reckon that’s the best reason to get into making something special.

It started with XCOM. “I love XCOM,” Jon Chey, founder of developer Blue Manchu tells me. “We all love XCOM.” And he once had the opportunity to work on an XCOM game. The trouble was that it was 2K’s ill-fated XCOM FPS project, which eventually came out, long after Chey left, as the unloved The Bureau. “It felt like a missed opportunity on my part that I hadn’t managed to make that project work while I was there,” he says. “I always thought there had to be a way of making a game of XCOM as a firstperson shooter.” 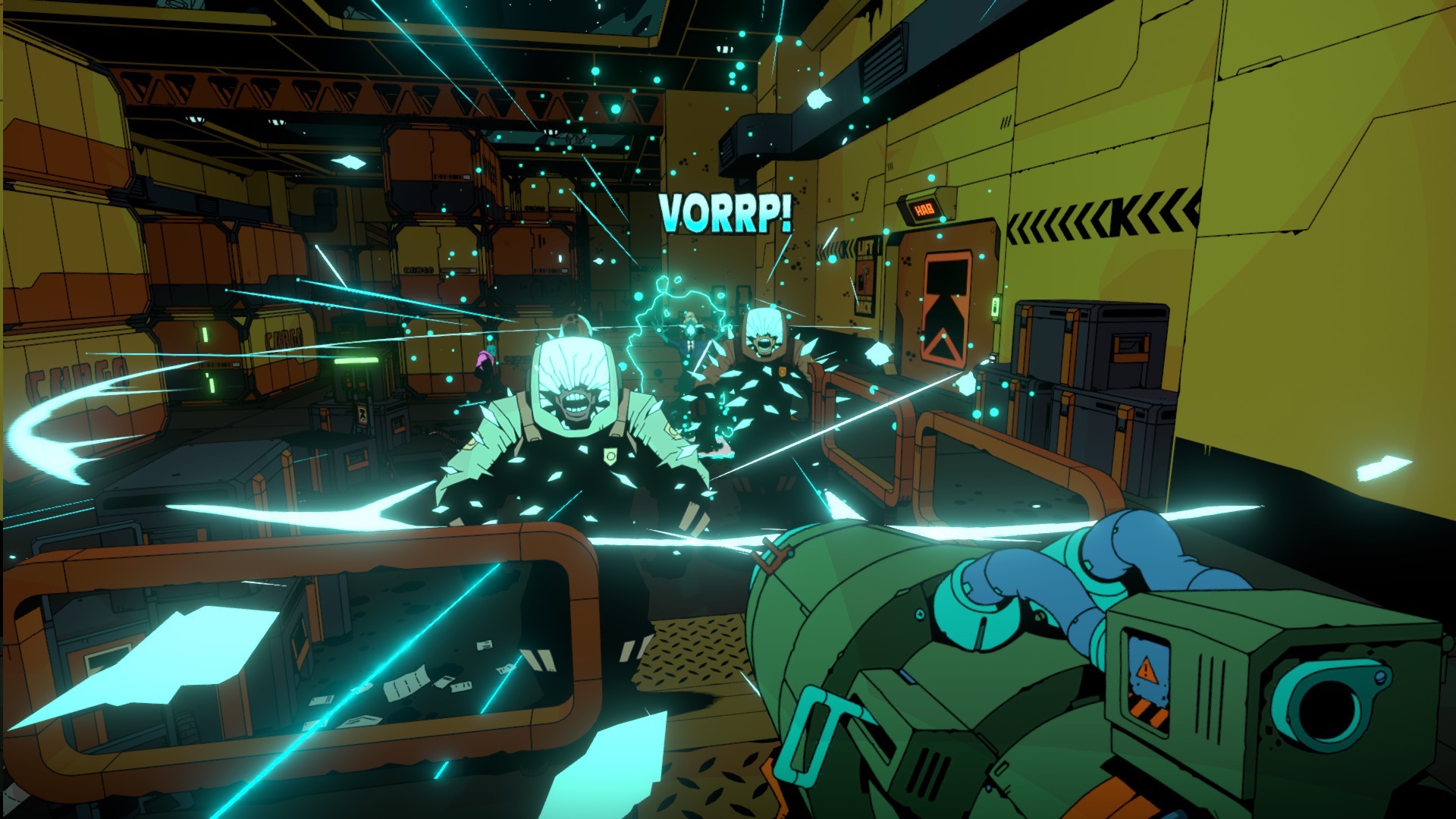 Making things right is where Void Bastards’ story starts, but Chey didn’t jump straight into it after going indie. Blue Manchu’s first game was Card Hunter, a delightful tabletop gaming-inflected tactical CCG which was meant to be a simple year-long first project. It didn’t turn out that way: its growing scope eventually pulled in six staff and took on as consultants Magic: The Gathering designers Richard Garfield and Skaff Elias.

But as the team continued to expand Card Hunter, they started to discuss what would come next. Chey started his career as a programmer at Looking Glass on Thief and, after cofounding Irrational Games, directed System Shock 2 and managed BioShock’s development, and he talked about where the Shock series had gone, and how some of Thief’s ideas about persistence had been left behind: levels that you could backtrack through and monsters that lived in them, outside the influence of the player. 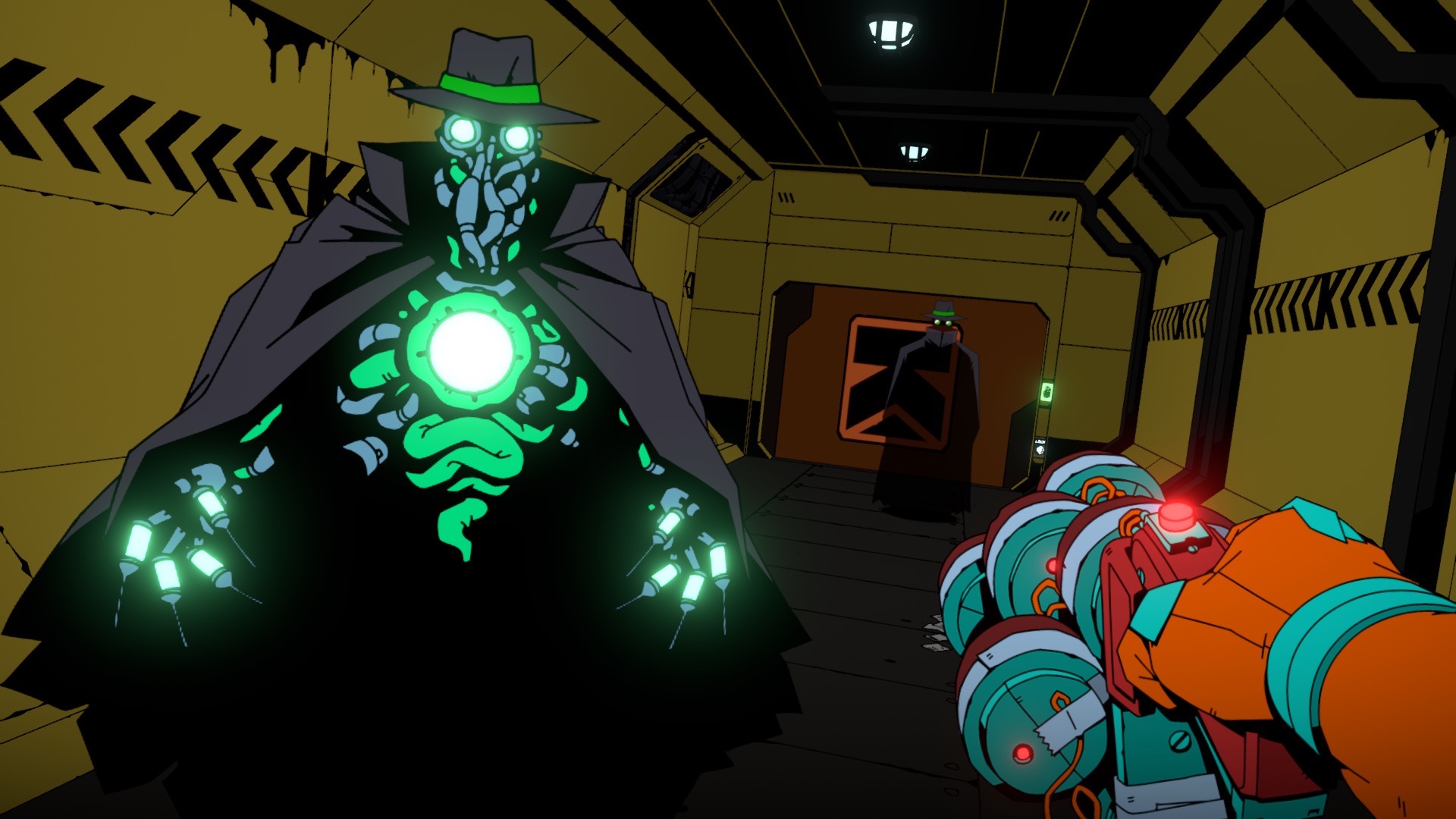 “We thought, there’s something there,” says Chey. “The BioShock games had that too, but they didn’t push it and in a way went backwards, because as they got more narrative-heavy they had to constrain the player more. I remember having long arguments during BioShock about whether we should allow the player to go back to earlier levels. It wasn’t really something the game needed but it was System Shock-y. So we thought, what if we built a framework in which the player can get into interesting tactical combat situations more frequently and in a more structured and player-directed way?”

That idea evolved into half of Void Bastards: a systems-driven FPS. Fundamentally, an action-based immersive sim. When you board a derelict you choose three items to equip. A damage-dealing weapon. Pretty standard: think shotgun, assault rifle, pistol. A secondary weapon, usually more contextual and complex and often requiring a little foresight and preparation. Think the Clusterflak, which shoots a cluster of bomblets on a slow timer. Open a door, shoot, close the door, wait. 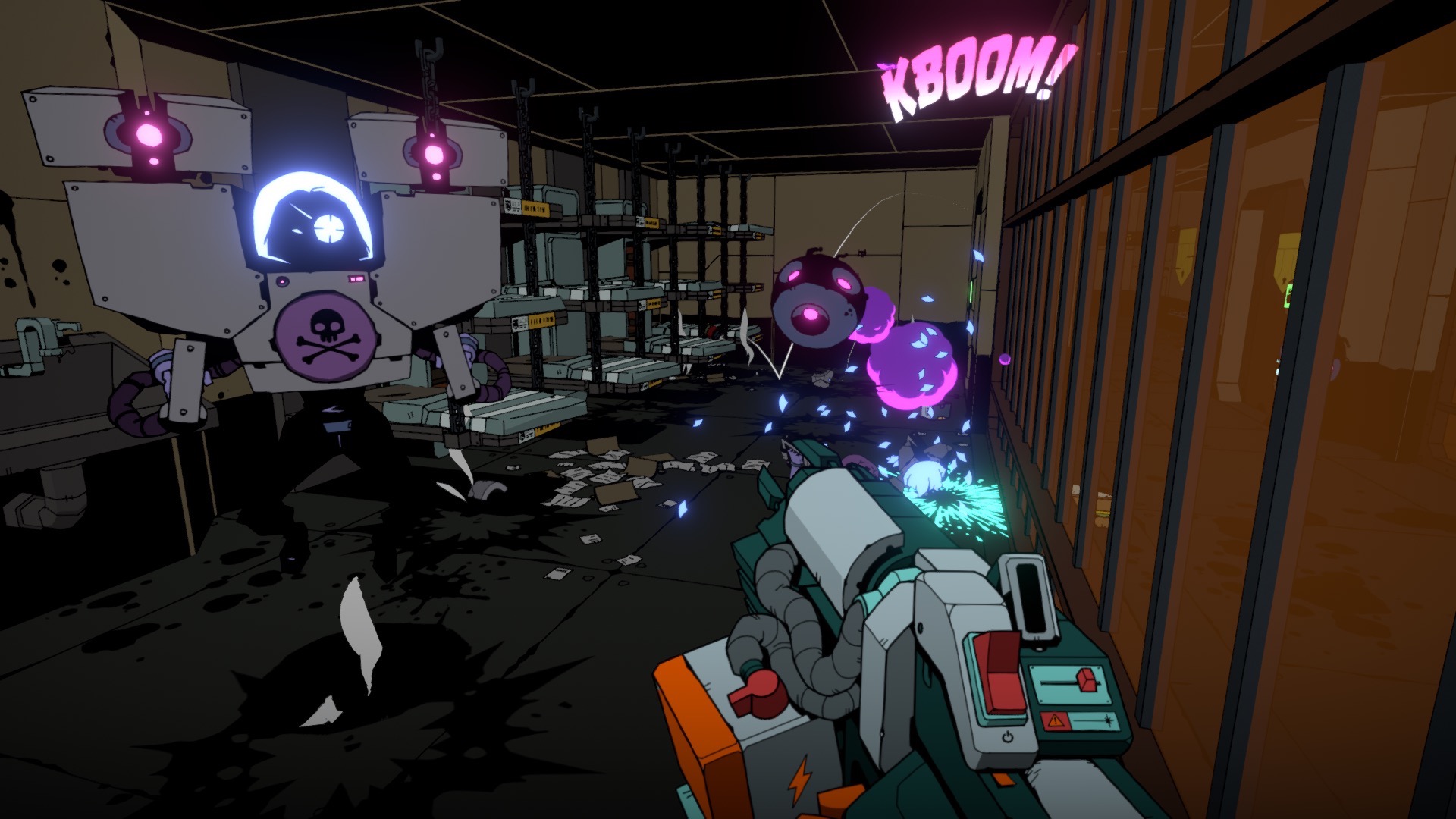 The last weapon doesn’t inflict direct damage. Think the Rifter. “Right now I think it might be the most powerful weapon in the game,” says Chey. Use it to ‘rift’ any NPC into it, carry it about, and then shoot it out again. “I can rift a guy, then I can lock the door of a little room and rift it into it, through the solid wall, so I can have a little room where I keep all the monsters prisoner!” Or you can rift monsters into a launch tube and eject them into space, or hack a turret and rift it around the level, shooting monsters for you.

It’s all about options, Heat Signature-like options, in fact, in 3D Heat Signature-like ships. Chey’s well aware of the comparison, though Void Bastards started before it was announced. (See also Blendo Games’ forthcoming Skin Deep. Let’s coin a new sub genre, the Heat Sig-like! (Disclosure: Tom Francis is a good friend.)) And, like Heat Signature, before you board you get to see what enemies you’ll be facing so you can choose the gear to suit. 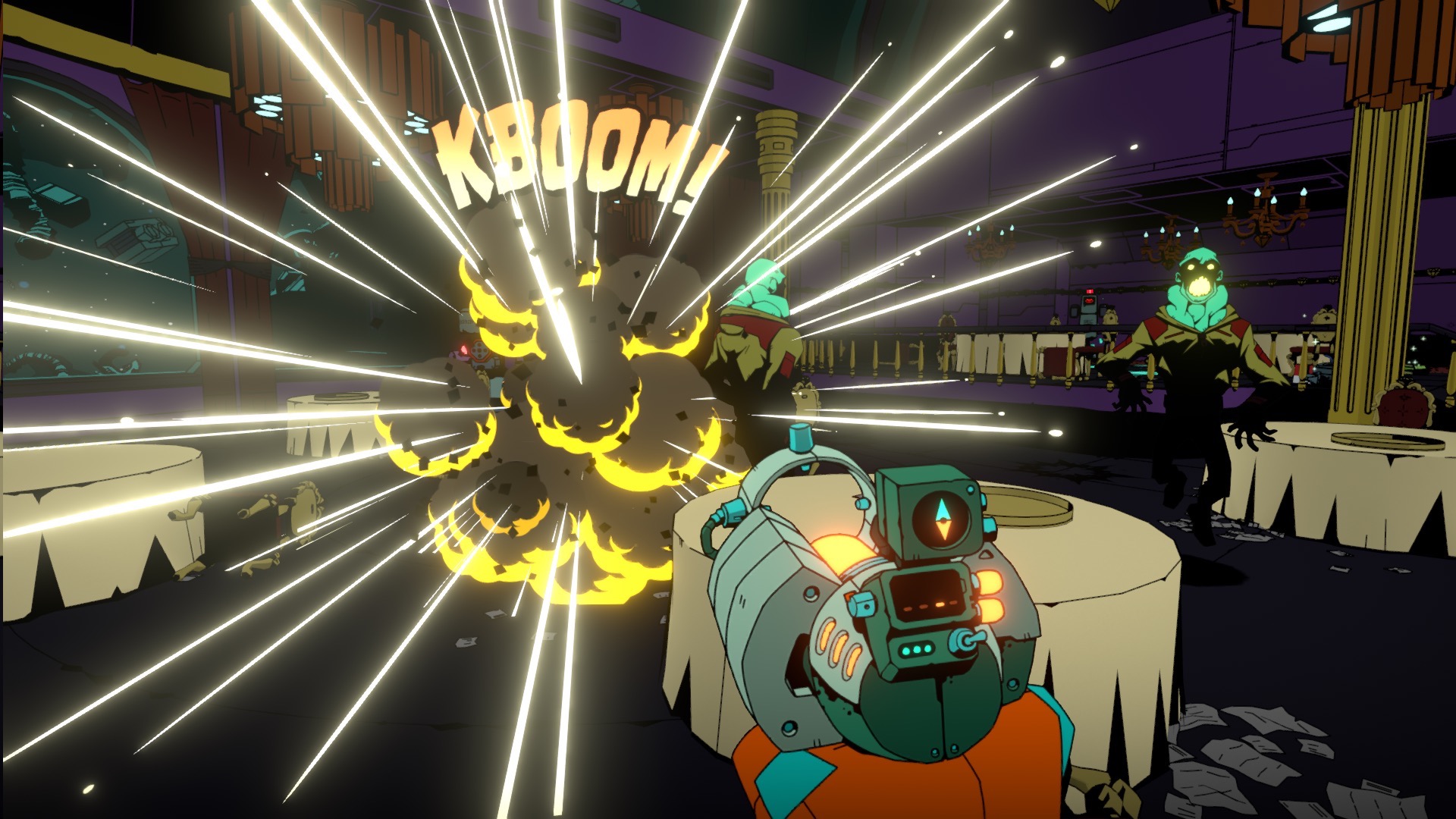 Well, if you have enough ammo reserves. In Void Bastards your ammo levels are persistent, and you don’t get to pick up new gear during missions. “Ammo and resource scarcity is a really big thing in this game,” says Chey, who likes how it drives players to try new things. “The player should always be hungry. You’re low on food and fuel and you need to get ammo for this weapon, but you’ve got a couple of grenades and kitty bots, so I guess that’s what you’re using. It creates that feeling of tension and constant desire. It’s also a game about a lot of looting, and looting isn’t really satisfying unless you need stuff.”

But not so much tension that you feel like you’re suffering. “We wanted to create the flavour of a game where you’re desperate and running out of stuff,” clarifies art director Ben Lee. The aim is to generate situations that are worth thinking your way out of, so you can pause the game at any time to see the map of the ship and figure out a plan. (Whether the map would pause the game or leave it running, as per System Shock, was a point of hot debate, but emphasising thinking won the day.) 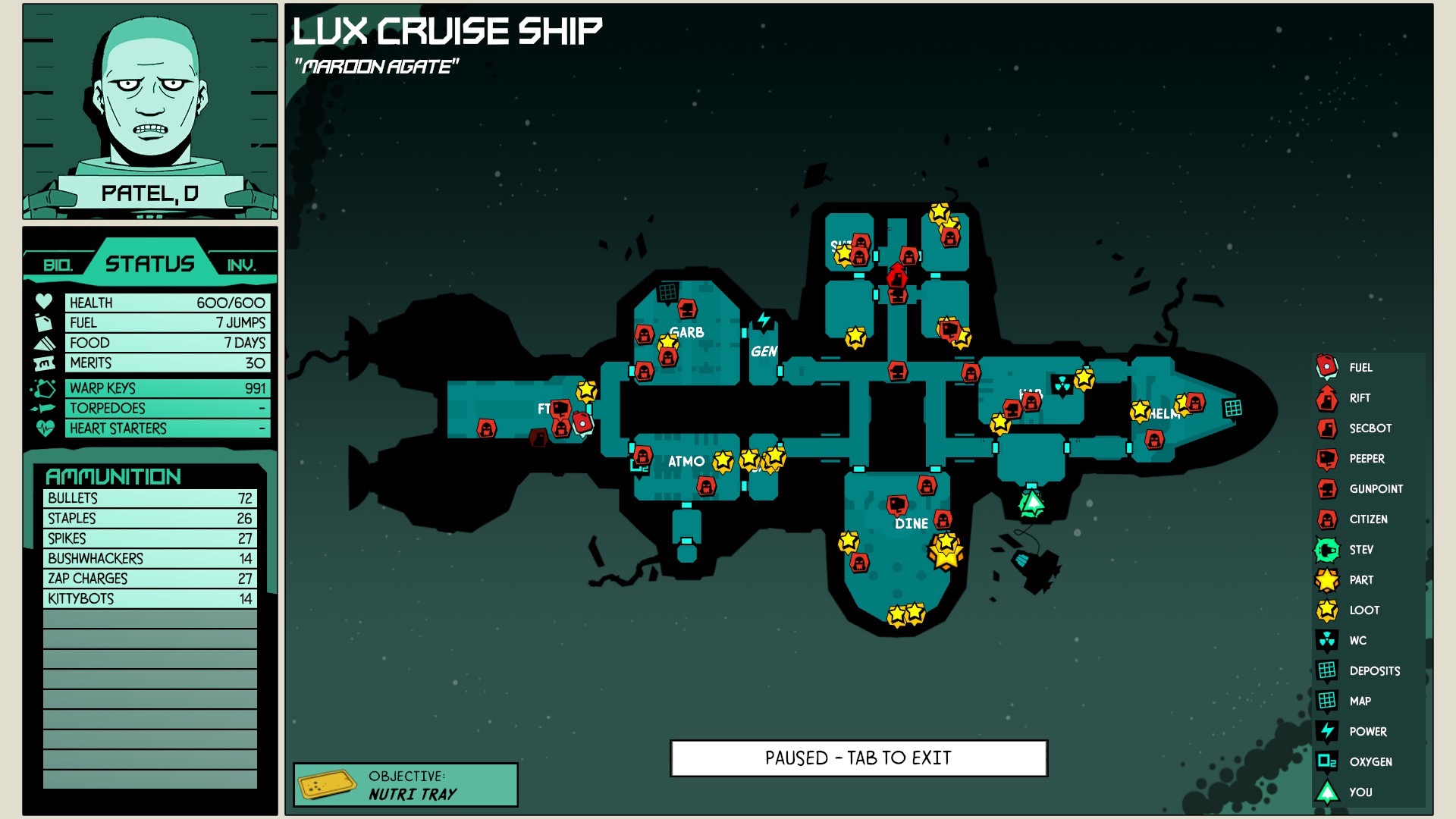 “So here I am in the airlock, and I need to get to Hab because I think it’s where I’ll find a particular kind of loot I’m after,” says Chey. “But the map shows the door’s locked, so I’ll need to go around the front of the ship, maybe through the Helm, and I’ll use the map terminal to tell me where all the good loot is.”

Each derelict out in space is of a certain type which informs the kinds of modules you’ll find on it, and loot will be in logical places, so the air compressor you’re after so you can craft more stuff from your ship will probably be in the atmosphere module. More common loot, like food, will drop more often in hab modules. But you’ll also be aware of radiation leaks, fire, security systems, collapsed sections, tough enemies, crawl spaces, and you’ll gain more information by hacking terminals. 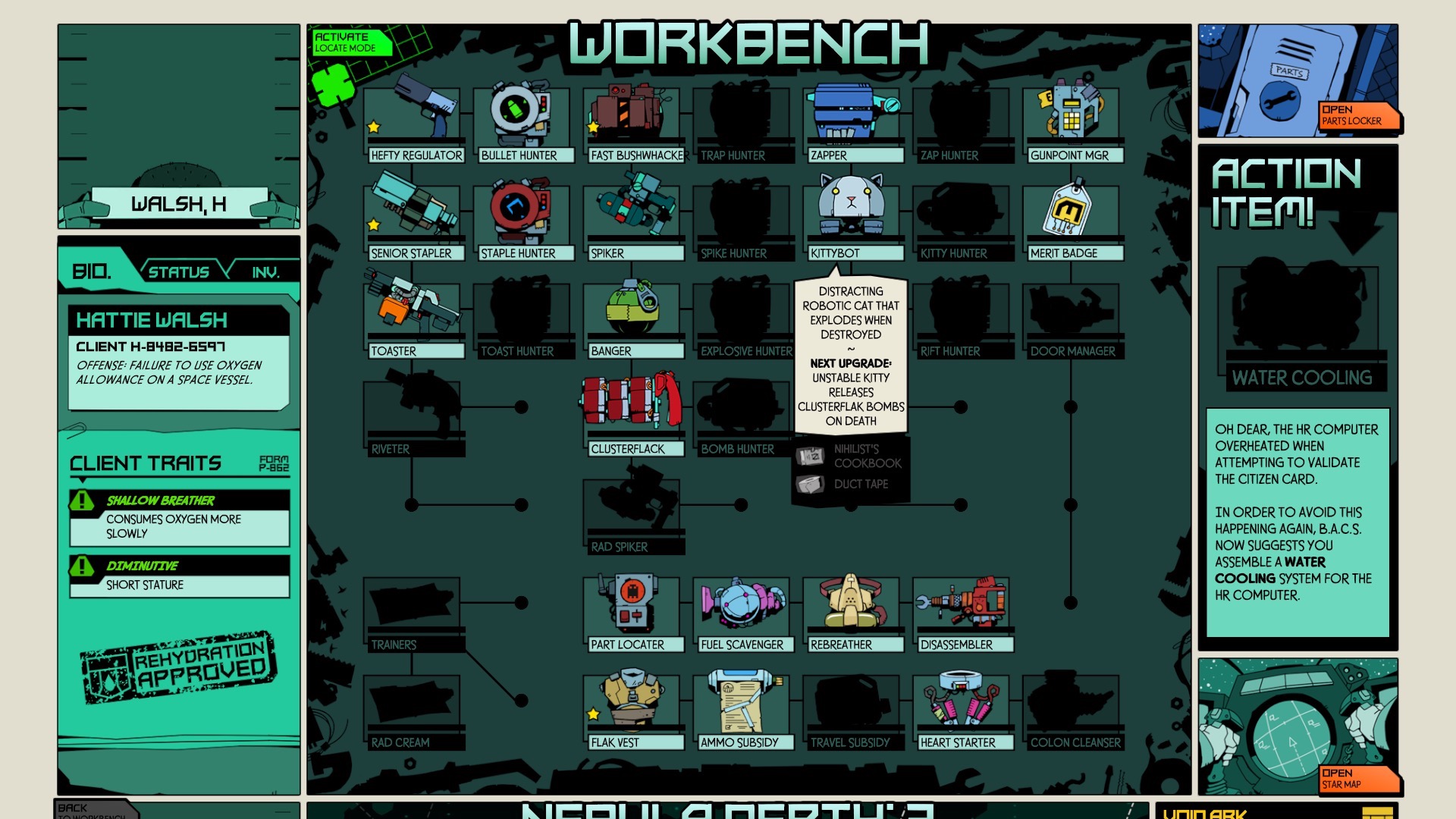 “But if that’s all there is to it, it’d be this very thinky, exhaustive, inch-through, maximise-your-loot game,” says Lee. “But I find it fun because you’re doing all that while your oxygen is ticking down. That’s what makes decisions really fun, they’re not just puzzles to solve.”

And sometimes the right decision is to get on the derelict, look around, and nope out of it. “That’s actually something our playtesters had a bit of trouble with,” Lee says. “You don’t have to do the mission! Don’t kill yourself, just leave!”

All this sounds a lot for a studio the size of Blue Manchu to take on. But Void Bastards is a choice blend of high ambition and clever economising. At its outset, Lee thought they’d find it impossible to make an FPS, worrying about the huge costs that come in rigging models, animating and texturing them. But then he saw a screenshot of Return of the Obra Dinn. “I thought, what if we radically stylised the game in a way that ignores the problems we’d face?” 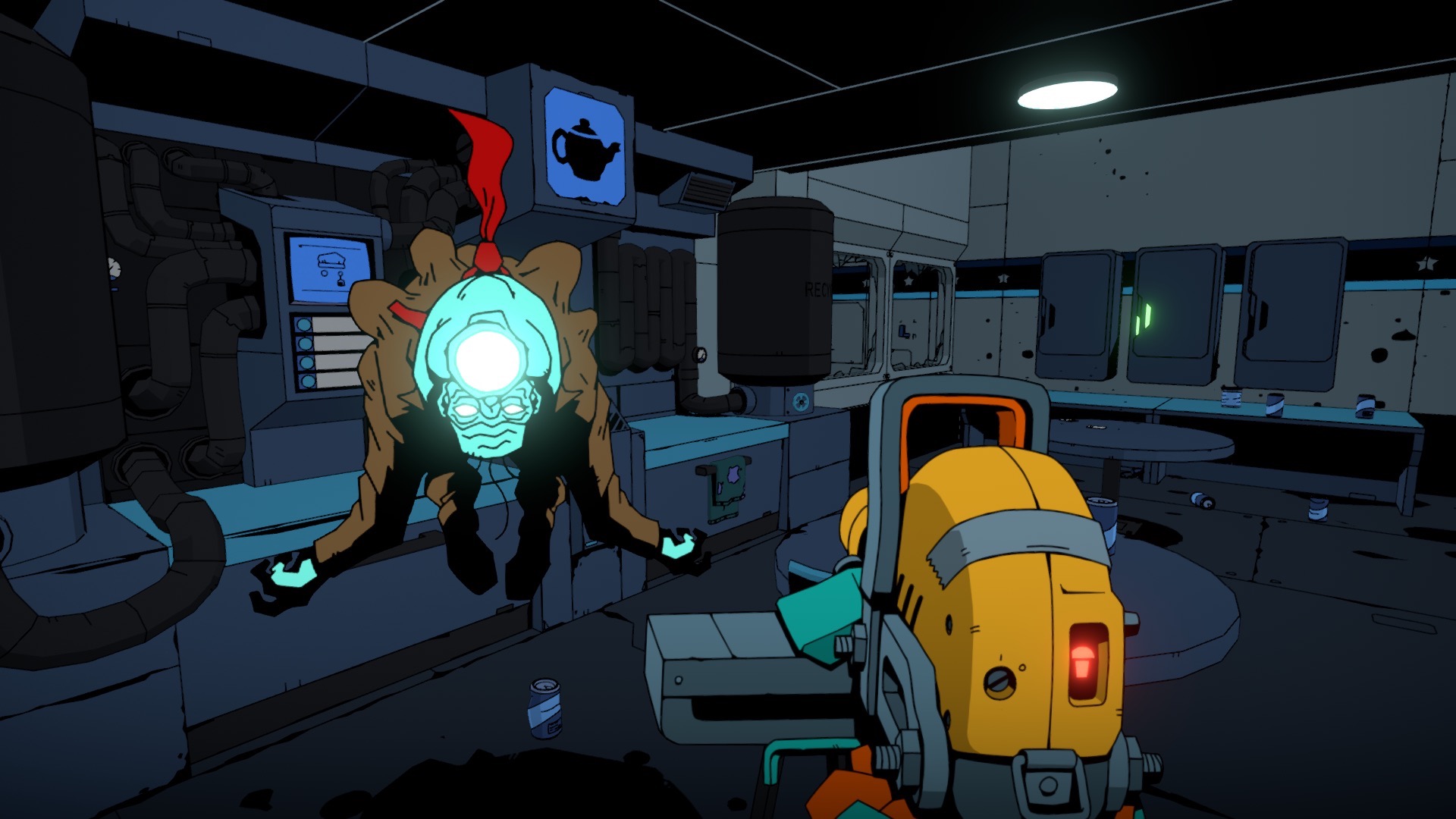 So Lee proposed using an old-school Doom and Duke-style sprite renderer. Monsters would have the traditional eight facings, but be high res so they’d avoid a retro look. The team jumped at the idea, and very quickly it started to inform the game’s overall comic book look, complete with suiting sparsely detailed environments.

“It gave savings across the board,” says Chey. “When you have sprite enemies, no one expects them to interact with the environment in complicated ways.” And they lent the game satisfying immediacy and readability. The most complex model is of a tea-dispensing machine, which took an entire week to make and was originally meant to be mere environment art. Being so opulent they had to give it an actual use, and now drinking tea from it grants a triple-damage buff. 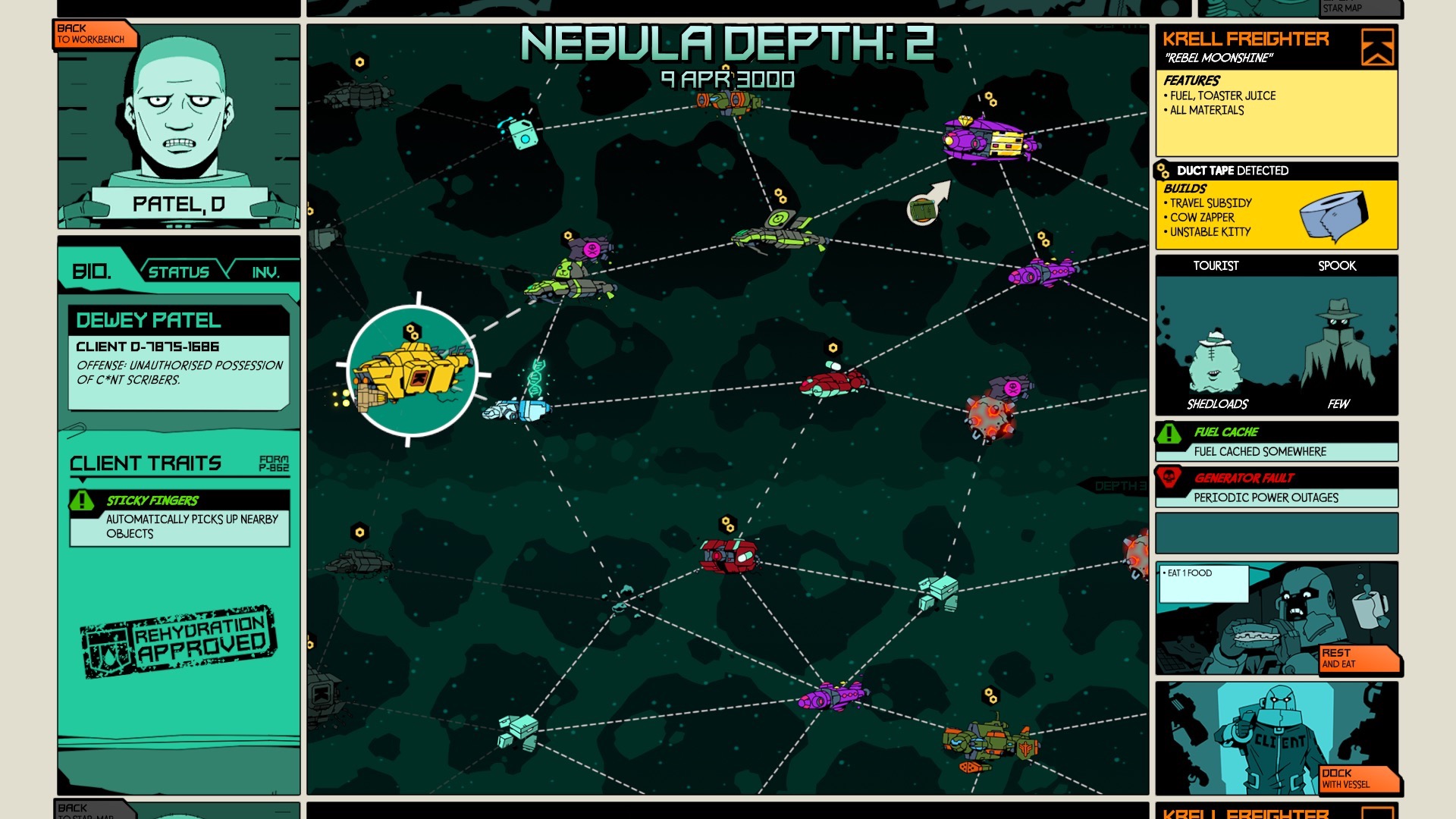 So that’s one half of the game. The other half is a turn-based strategy played out across a nebula in which your ship’s trapped, and this is where XCOM comes in, specifically its Geoscape and its elegant relationship with the tactical game. “It’s where your goals come from,” says Chey. The overall object of the campaign is to escape the nebula by finding equipment to repair your ship, travelling between nodes on the map, looking for derelicts to board.

“It’s a medium-complexity strategy game you’re playing on top of the action game,” Chey continues. “You don’t spend hours in there. It’d be pretty boring to play by itself, but it frames the intense missions.” In that sense, the strategy side also paces out the action part of the game, which they found became draining when played in long sessions. 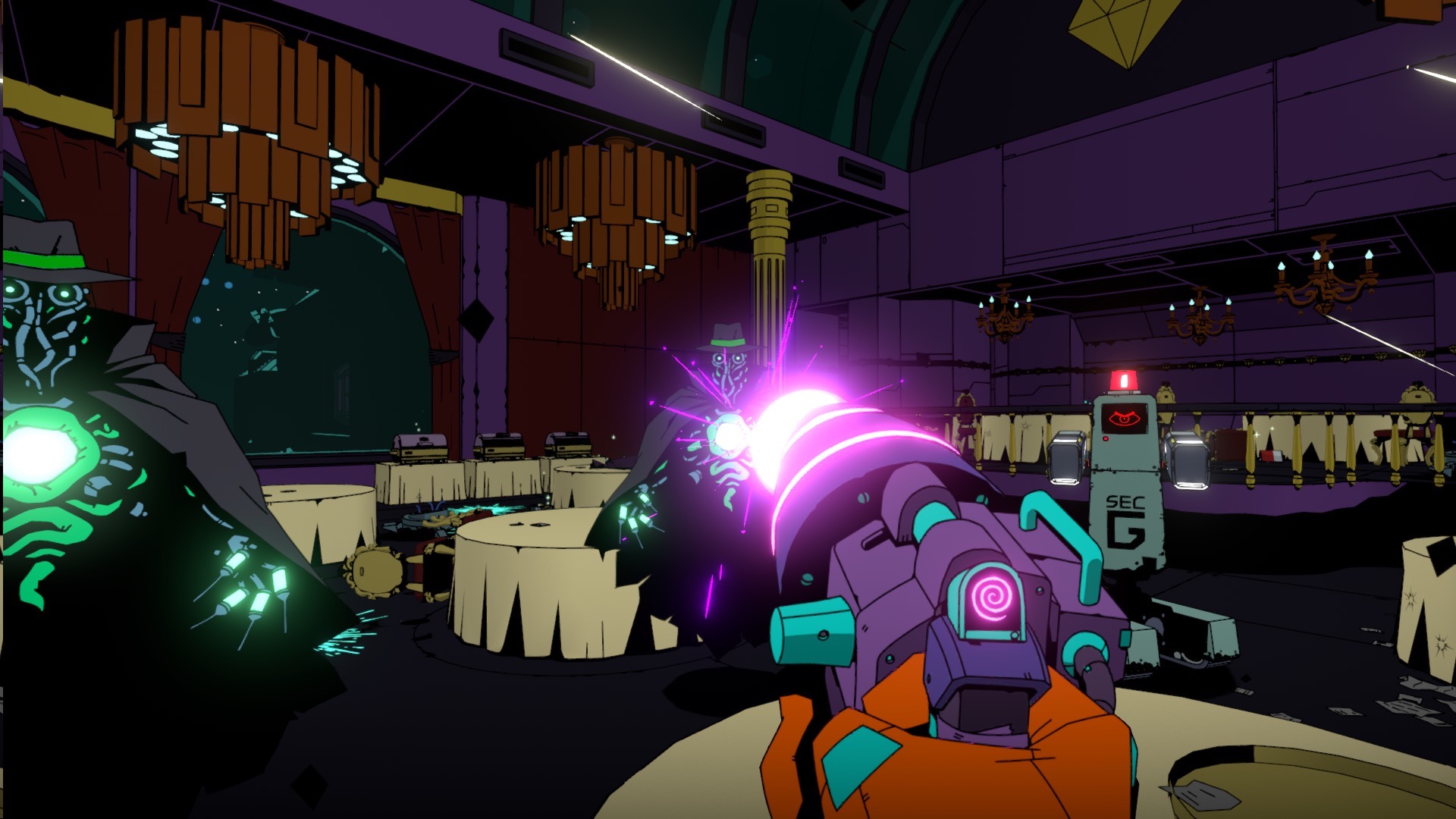 Most of the systemic games Chey has worked on only came together at the very end. “Thief was basically broken right up until 30 days from gold master. It had an interesting mechanic but it wasn’t fun.” But Void Bastards has been playable from very early on, so it’s already had months of iteration. And Chey’s old buddy, Ken Levine, has already sunk 36 hours into it. “Ken’s polite, but not polite enough to play for that long if he didn’t like it. And we have the metrics, so we know he has.”

That’s just the kind of endorsement I need for a game that promises to reflect the key ideas behind XCOM, Heat Signature and System Shock. Blue Manchu hopes to release Void Bastards in spring next year. I can’t wait.

Disclosure: Cara Ellison wrote for Void Bastards, and she wrote for us too.